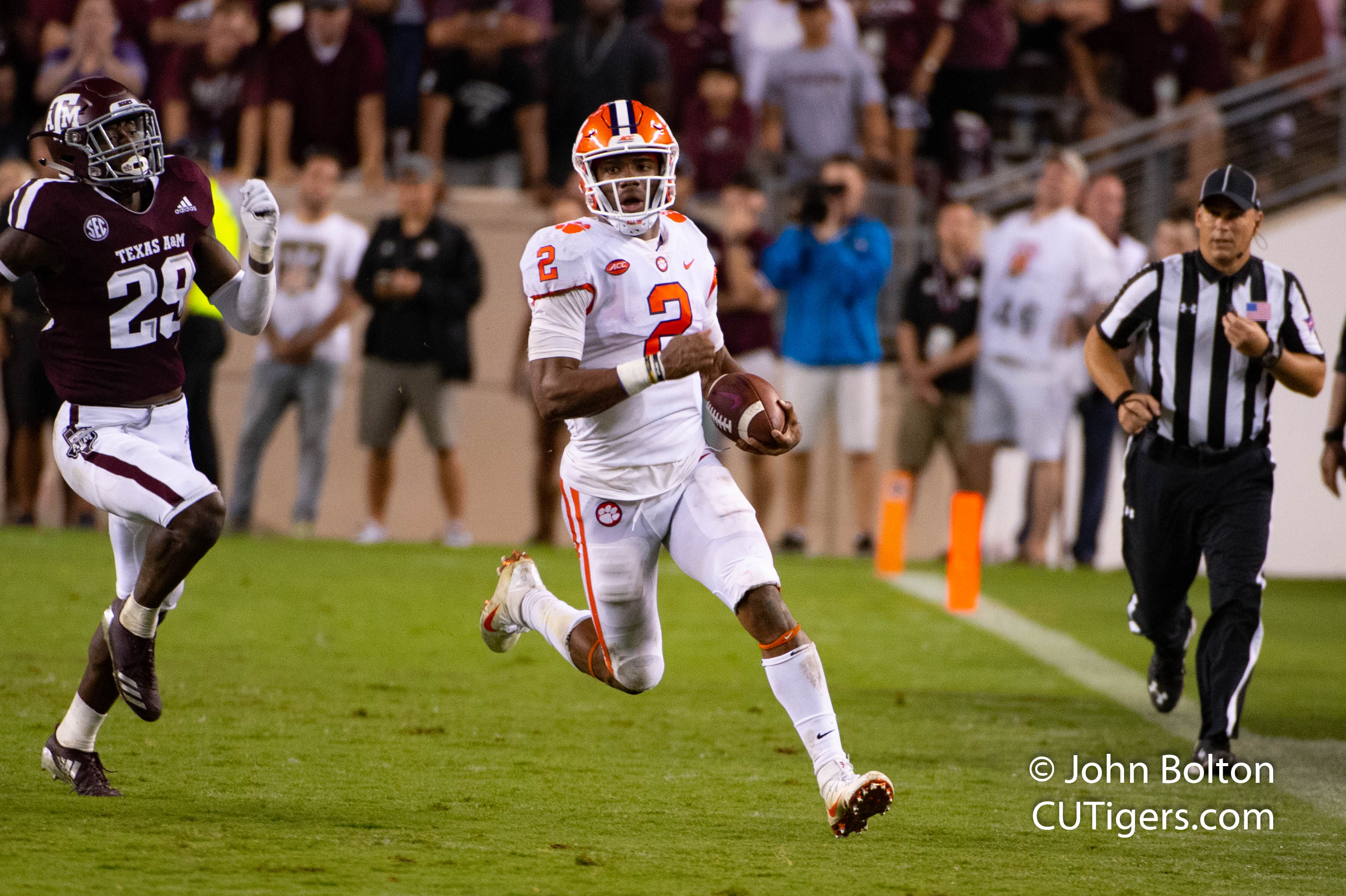 COLLEGE STATION, TX - The Tigers had several opportunities to run away with the game on Saturday night, but they allowed the Aggies to hang around and feed off the capacity crowd of nearly 105,000. When Etienne scored to put the Tigers up 28-13 with a minute left in the 3rd, no one in the stadium expected the game to come down to a 2-point conversion and an onside kick! What a roller coaster sequence of plays it was for K'Von Wallace in the waning minutes. He made a game-saving tackle at the goal line, forcing a fumble for a touch back and minutes later drops an interception in the end zone that gives the Aggies a touchdown, setting up a 2-point conversion for the tie. I was about 50 feet away from the play, and you could tell Wallace was really upset with himself for not making the catch. However, he was able to put it behind him quickly and fittingly redeemed himself, making the pick on the 2-point conversion. 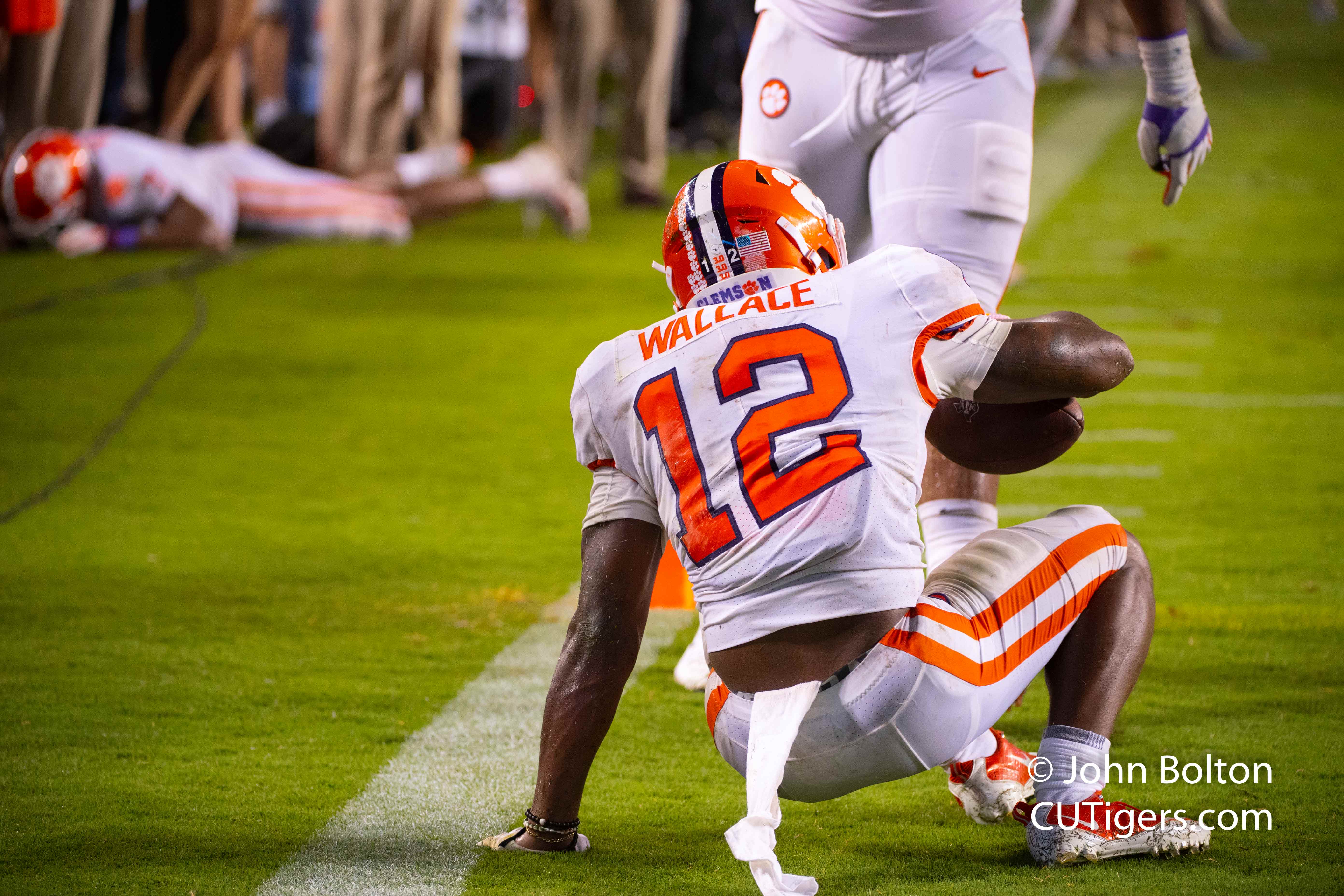 Both Kelly Bryant and Trevor Lawrence played well again, but the veteran really took command in the second half, exhibiting his poise and experience in these hostile road environments. After the Aggies started the second half with a field goal to cut the lead to 14-6, Bryant led two scoring drives in the 3rd quarter—a touchdown pass to Overton and a TD run by Etienne—to extend the lead to 15 points each time. Bryant was 12-17 for 205 yards with a touchdown pass and another on the ground with no interceptions. He led the Tigers in rushing with 54 yards on 15 carries. 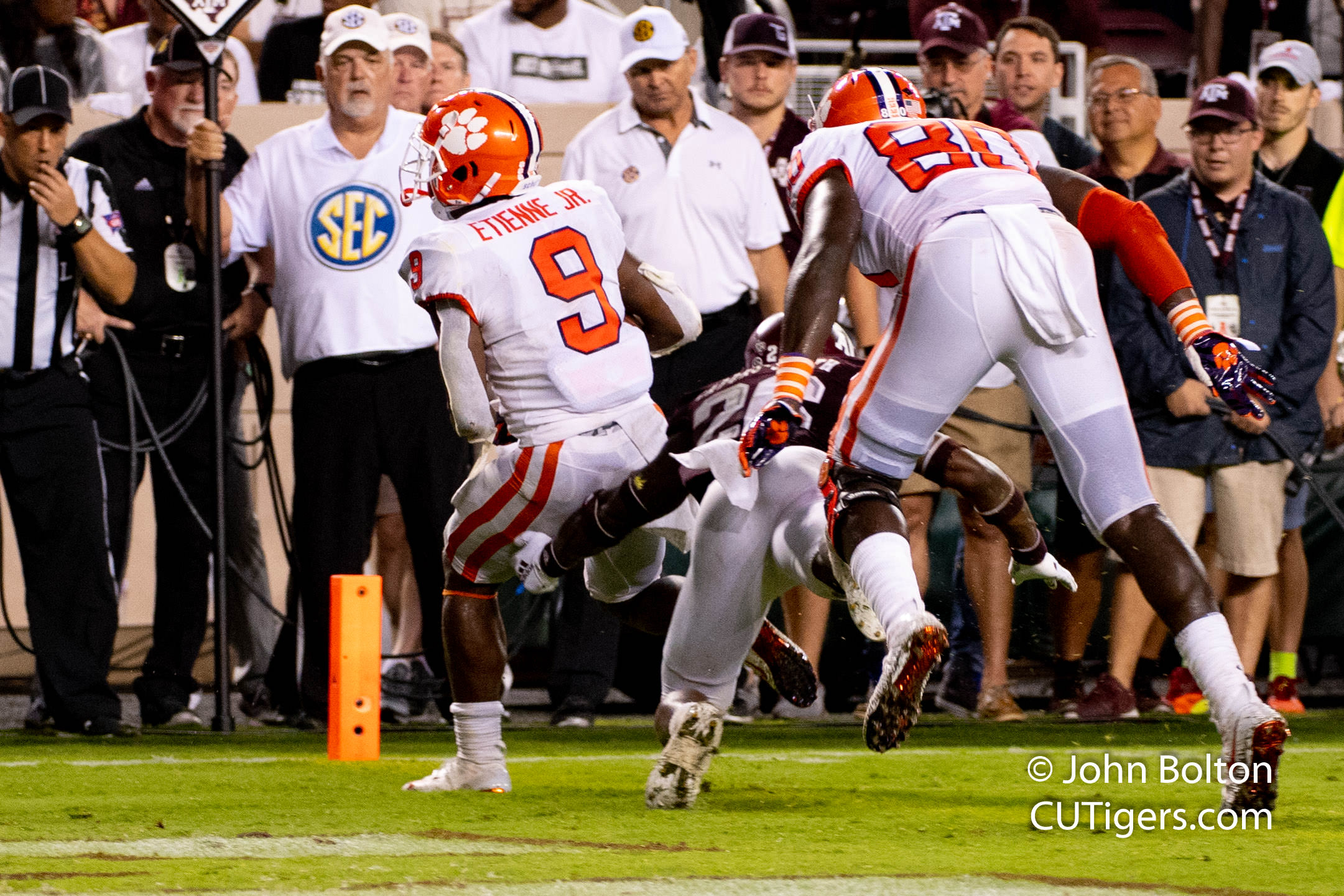 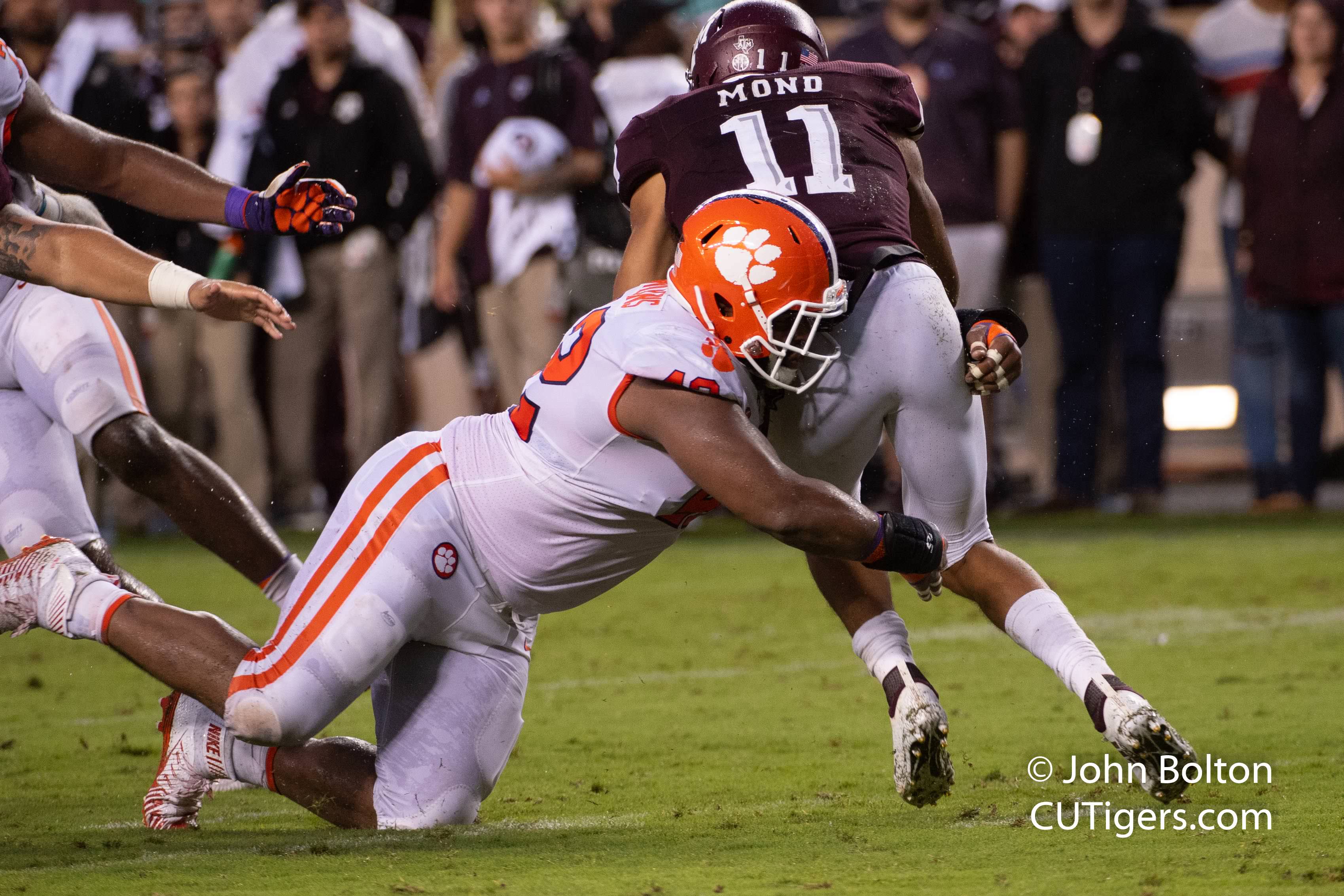 Trevor Lawrence was impressive in his first career road game on the biggest of stages. In fact, he added to his legend by completing a 64-yard touchdown pass to Tee Higgins on his very first play! Lawrence showed the composure we all expected, just as we saw from Deshaun Watson as a freshman. Lawrence didn’t play much in the second half, but he was 5-9 for 93 yards with the one touchdown and no interceptions. Almost as impressive as his touchdown were a couple of pedestrian plays that demonstrated his poise. From his own red zone in the 3rd quarter, he threw a strike on the run to Hunter Renfrow at the sideline, but it was just short of the first down marker. Earlier in the game when he was forced out of the pocket on 3rd down, he made the wise decision to throw the ball harmlessly out of bounds rather than make a mistake. 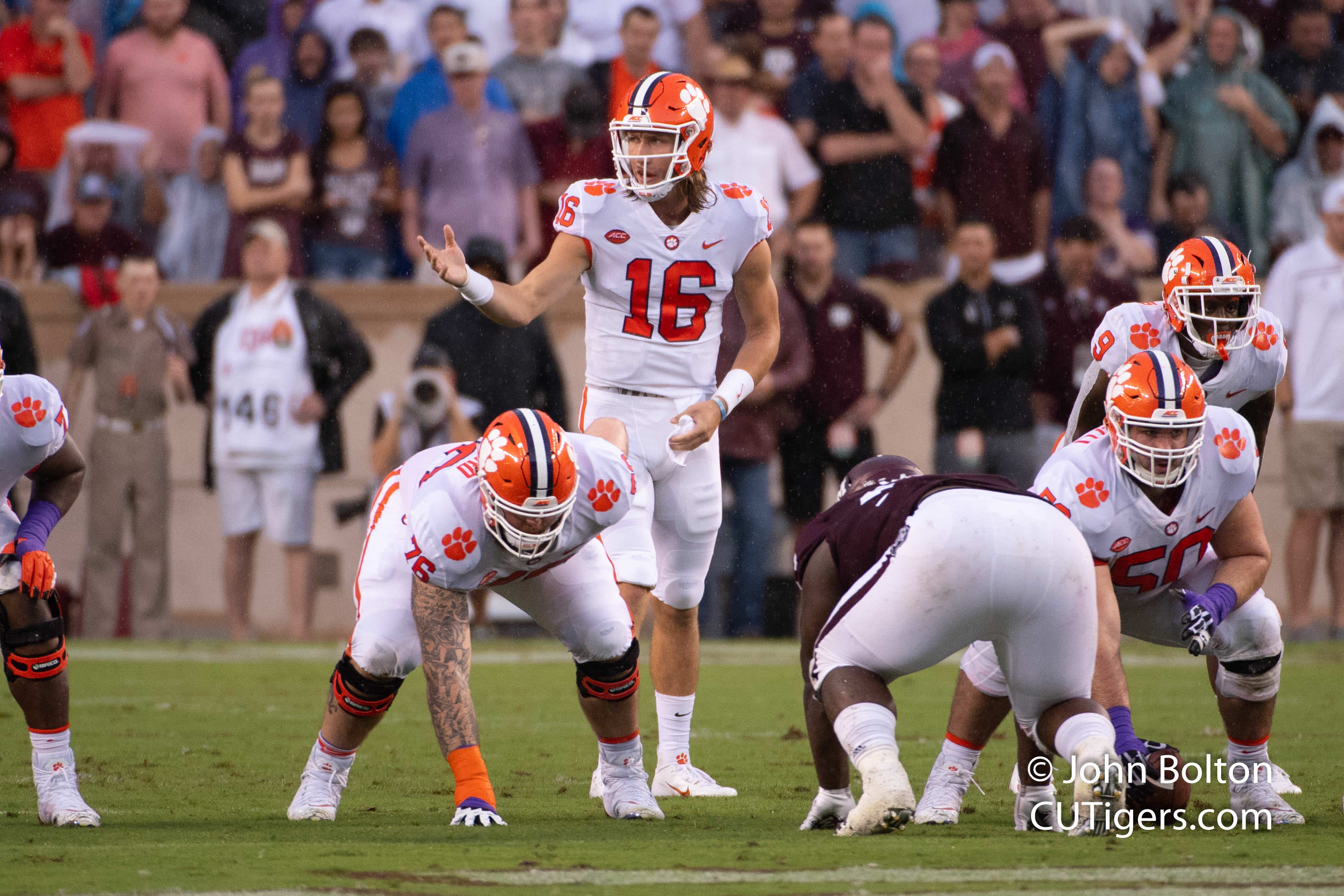 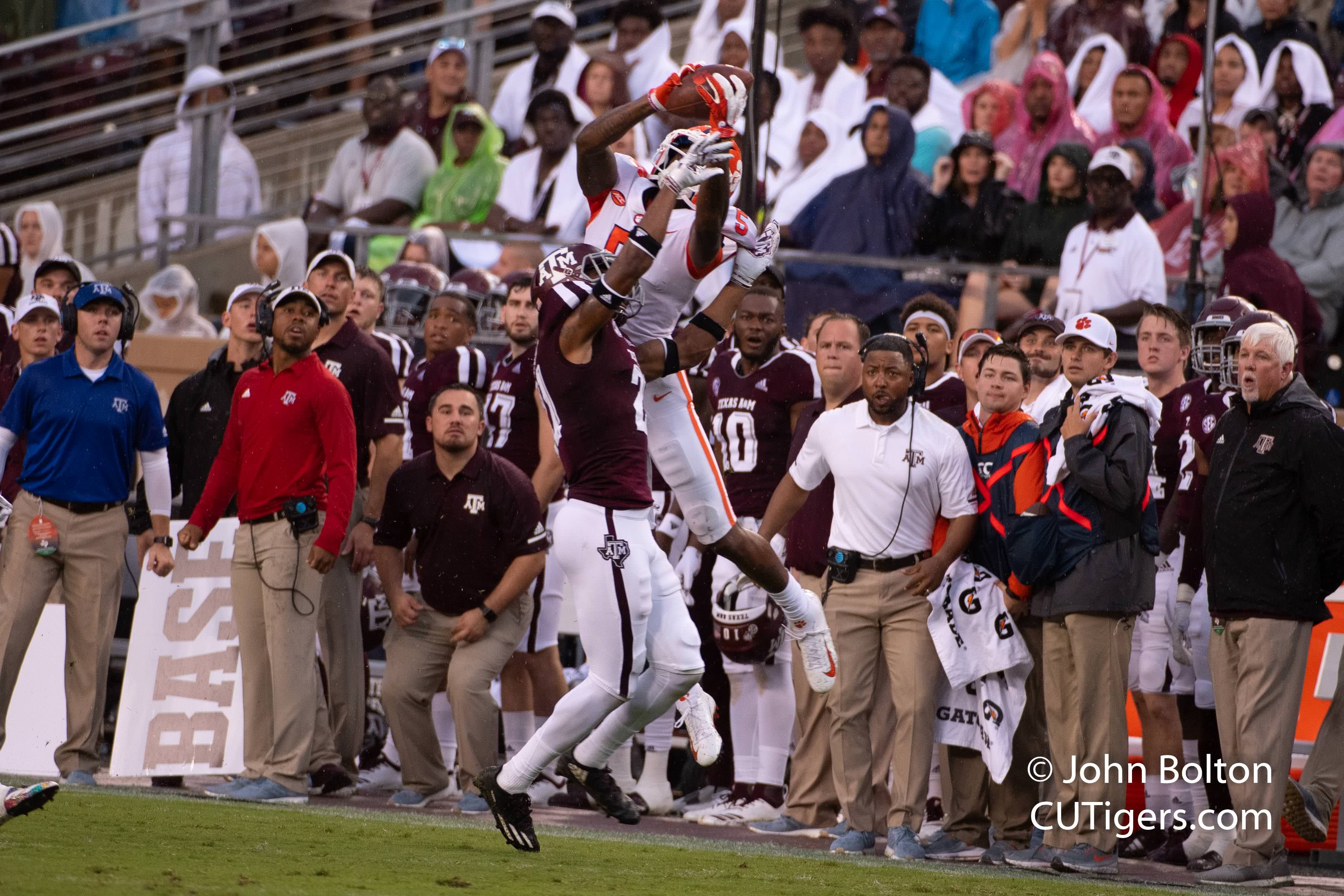 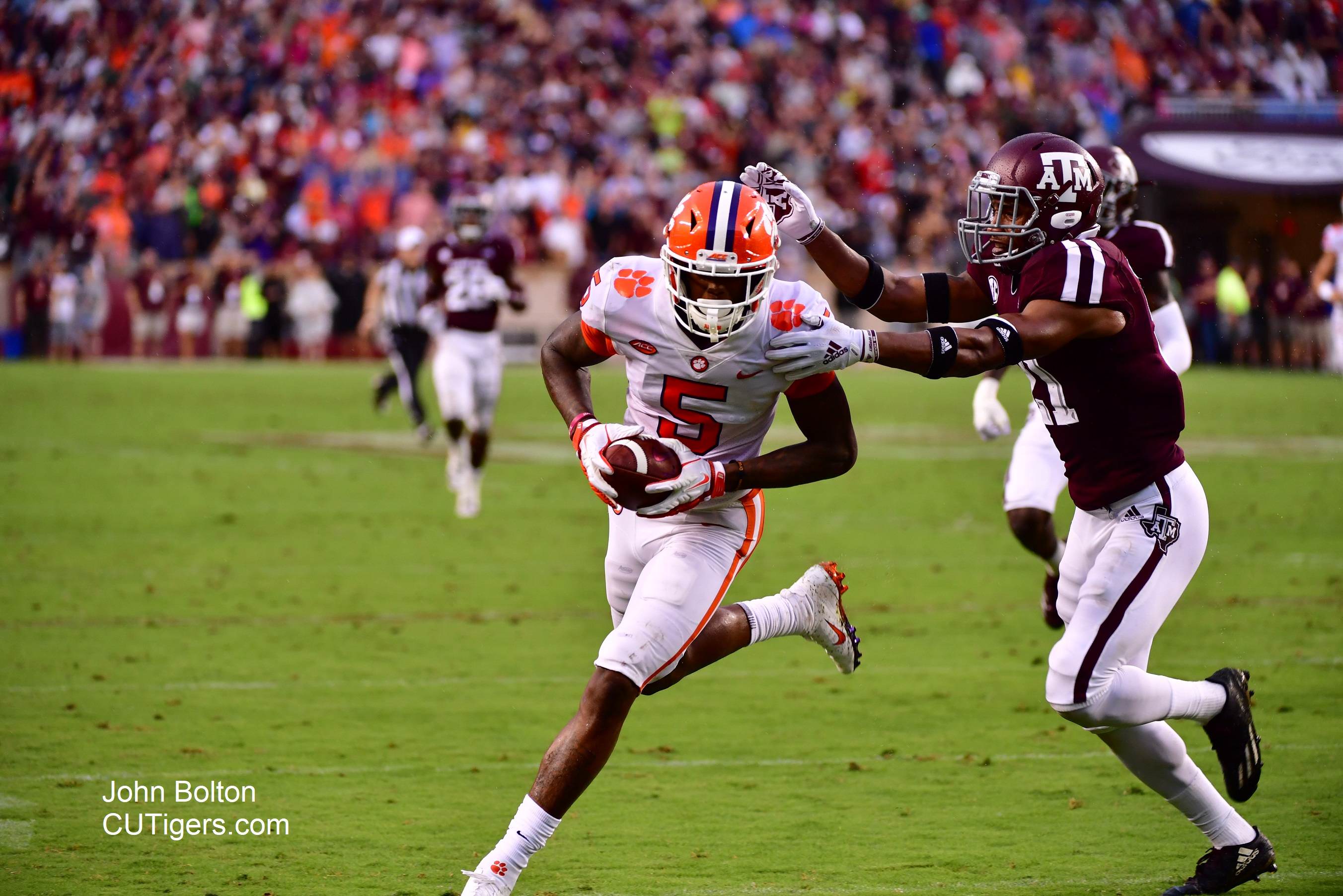 Defensively, the Tigers had all kinds of problems containing Kellen Mond in the passing game. There were several times when it looked like they had Mond dead to rights, but he was repeatedly able to escape and complete passes down field or to his hot reads for big gains. The A&M receivers also made some tremendous plays. The one big positive was that the Tigers completely shut down RB Trayveon Williams and the Aggies’ running game. Williams rushed for 240 yards and 2 touchdowns last week in their opener, but the Tigers held him to just 31 yards on 17 carries! Stopping the run is always the first priority for any defense, and the Tigers can check that box on the road. It was also encouraging to see Denzel Johnson in there at safety on big plays late in the game. He made a great pass break up, and if he can be a consistent contributor, it will give the Tigers some much-needed depth in the secondary. I asked Venables about Johnson, and he was very pleased with his recent emergence and play on Saturday night.

Although special teams didn't play a huge factor in the game for the Tigers, how big was that blocked field goal? The Tigers lose if not for that, and the Aggies also missed an easy field goal on their opening drive. Potter was impressive again on his kickoffs, getting 3 touch backs on his 5 kicks. He should have had 4, but the Aggie return man took one out of the end zone and was tackled at the 15. Spiers had a nice 51-yard punt but had a big shank late in the 4th quarter that gave the Aggies great field position for their last score. 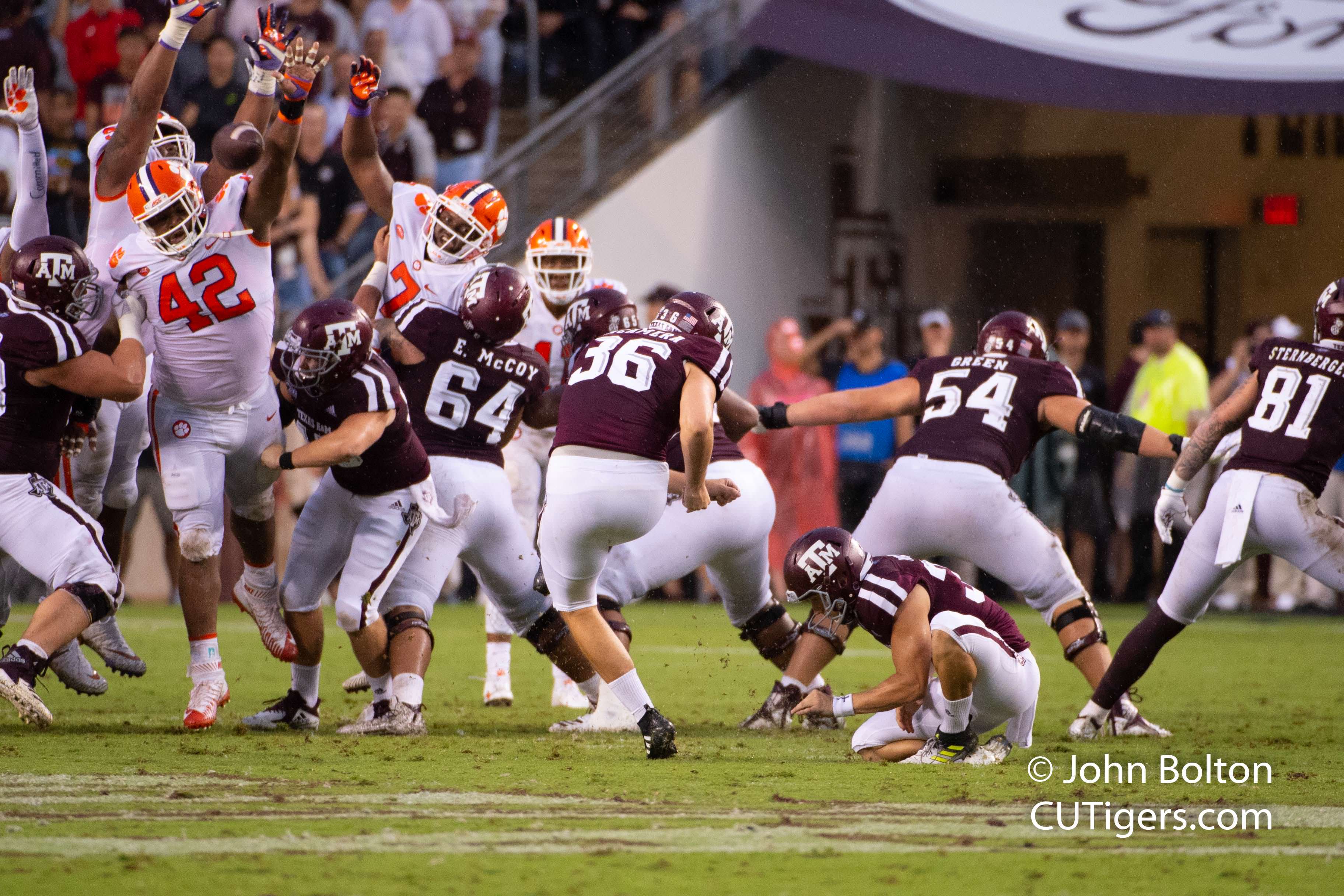 The Tigers should have won much more comfortably, but a win is a win—especially in an environment like that in just the second game of the season. Not to mention all the breaks that went the Aggies' way—the fumbled snap by Kelly Byrant at the goal line on 4th down, the two interceptions that went through Wallace’s hands and the tipped ball that landed in their tight end's hands for a 3rd down conversion, to name a few. One of the big positives to take away from this game is that the Tigers won the turnover margin for the second game in a row--the first time that's happened since the Fiesta Bowl against Ohio State two years ago. In fact, the Tigers have yet to turn the ball over this season, unless you count the turnover on downs when Kelly Bryant fumbled the snap at the goal line. Sure, there is a lot to improve on for the Tigers, but every Clemson fan should be elated to get out of College Station with a huge road win! I called this game the most dangerous one on the schedule, and I believe that all the more now. The Tigers will use this game to get better and should cruise from here on out.