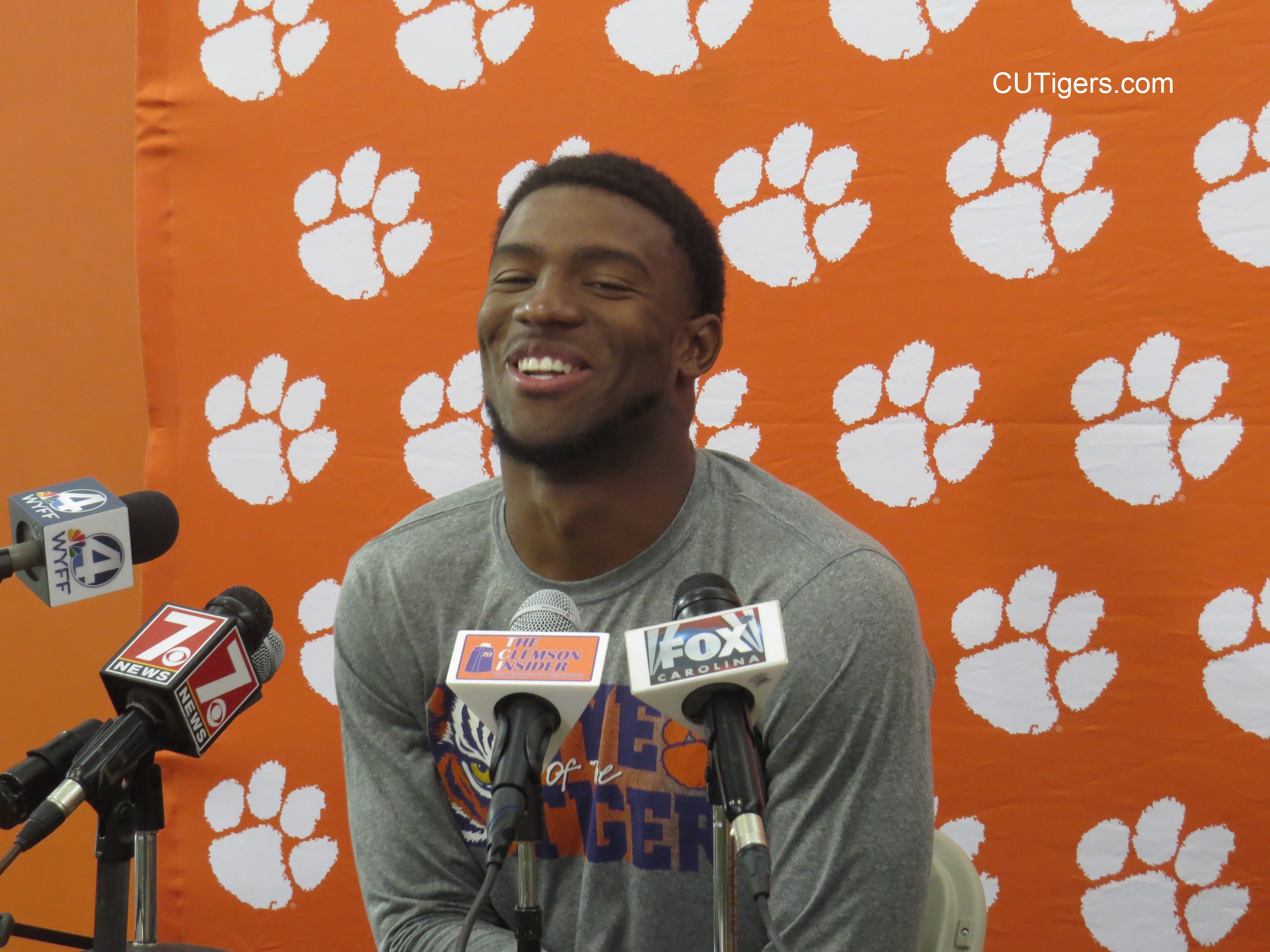 Photo by Trevor Groves CUTigers.com
I had to drive through the night, but I made it back just in time to get showered and make it to our Monday morning interviews. No rest for the weary! But we got an all-time record of 9 players, plus Venables and Tony Elliott, so it was worth the sleep deprivation.
Venables was not in the greatest of moods, as you'd expect after his defense allowed 430 passing yards and nearly allowed the Aggies to come back from a 15-point deficit in the 4th quarter. Still, they made the big play when they had to on the game-tying 2-point conversion attempt, and a win is a win. The consolation was how well they played against the run, and that should be the first priority of any great defense. The Tigers held the Aggies to just 71 yards rushing and limited Trayveon Williams to just 31 yards on 17 carries with no touchdowns after he racked up 240 yards and 2 touchdowns the previous week. There were certain plays that were coverage busts by the Tigers and others for which you just have to credit Mond and/or their receivers for making great plays. The bottom line is that the game exposed some weaknesses that need correcting, and anytime you can get that while still beating a good team on the road, it's a positive. In talking to the players today, I got the sense that they all see it that way.
We did not talk to Trevor Lawrence again today--just Kelly Bryant. His big-game road experience from last year was crucial, and I think that's why Dabo felt comfortable sticking with him for most of the 3rd quarter and the entire 4th quarter. It also helped that he led the offense to touchdowns on consecutive possessions in the 3rd quarter after Trevor Lawrence had a three-and-out. I asked Kelly if he felt that he is more patient in the pocket than he was last year, and he concurred. It was great to see Trevor throw a bomb for a touchdown on the very first play of his first road game, but there is a comfort level with Kelly right now that is absent with Lawrence for no reason other than the fact that he's a true freshman. Lawrence is still the future, and that might come before the end of this season, but I was not surprised at all to see #2 take over the ship in the second half. Not only did Bryant calmly dispatch Louisville, Virginia Tech and South Carolina on the road at night last year, but he has the extra threat to run the ball that Trevor does not have right now.
We talked to Justin Foster for the first time in this setting, and what a delightful interview he is. He's had the start to the season everyone was hoping for, with a tackle-for-loss in the opener followed by a sack and a fumble recovery at A&M! If he can stay healthy, he is going to be about as formidable as Clelin Ferrell and Austin Bryant to opposing offenses by the end of the season. Clelin Ferrell told us that he was extremely raw and clueless when he first got to campus, but Ferrell took it upon himself to take Foster under his wing, and it's paying off in a big way now. Foster told us that Clelin still gave him grief about missing another sack, but he said Ferrell threw some rare praise his way after recovering the fumble he created. Clemson is well known as WRU, but it is getting to the point that it can claim the DLU title as well, and Foster is a part of this next crop of great Clemson defensive linemen that will follow Ferrell, Wilkins, Lawrence and Bryant (or the "Orange Rush", as I like to call them)--perhaps the greatest college D-Line of all time.
Finally, we also talked to local hero Cade Stewart for the first time, and he was about as fun to interview as you will find. We covered a wide range of subject matter, including his mullet, and especially his thoughts on making his first career start in a big game on the road. Steward is yet another Daniel High School product to play for the Tigers, but he originally joined the team as a grey shirt. In just a couple years, he is now starting over Sean Pollard at guard, and he played so well at A&M that he will also start against Georgia Southern on Saturday. Pollard is new to the guard position after splitting time at right tackle with Tremayne Anchrum all of last season, but he would not have lost his starting spot unless Stewart had really impressed the coaches, and we heard all August that he did just that.
Enjoy those interviews, as well as Tony Elliott, Clelin Ferrell, Christian Wilkins, K'Von Wallace, Travis Etienne, Diondre Overton and Isaiah Simmons below!