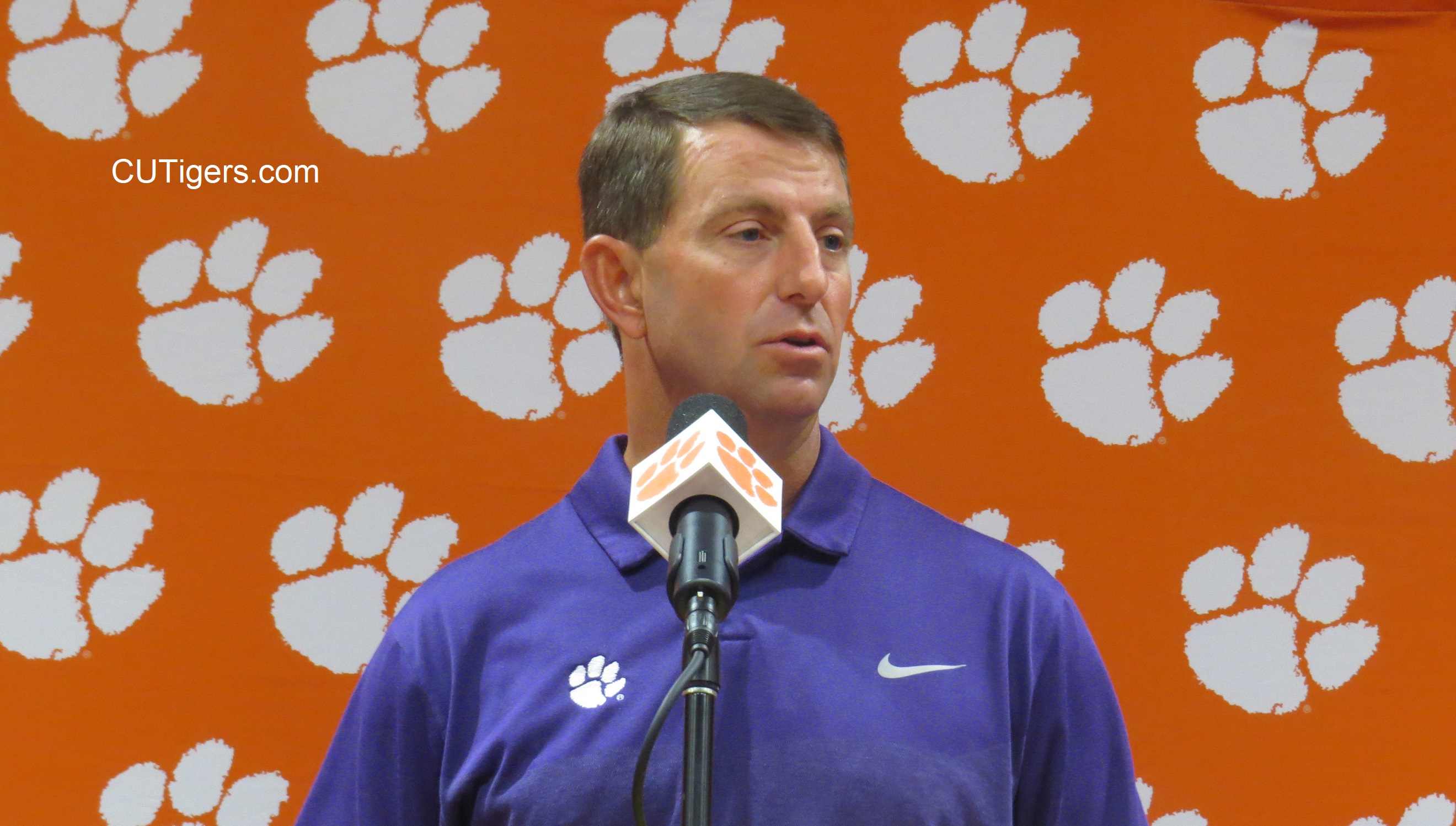 Dabo started off his weekly press conference by talking about how proud Georgia Southern's program is. He pointed out that they once beat Florida in the Swamp. He also observed that the Tigers are #1 in the nation with 6 plays over 40 yards, but Southern has only allowed one play over 20 yards. Dabo compared Georgia Southern to App State as a small program on the rise. He said that back in his recruiting days years ago, he used to regularly go jogging on the Georgia Southern campus whenever he was in that area.
Dabo also discussed the hurricane approaching the coast of South Carolina and asked for prayers for everyone affected. He said that Charleston Southern has reached out to them about possibly using their practice facility as schools have done in the past. Clemson actually canceled the remainder of classes for the week, which is excessive if you ask me. There shouldn't be more than a lot of rain this far inland, but I'm sure the students don't mind the free holiday! It will, of course, be interesting to see how the weather affects the Tigers' game on Saturday. It cold be another rough one like Georgia Tech last year or Notre Dame in 2015.
I asked Dabo about Tremanyne Anchrum's great start, and he said Anchrum and Hyatt have really solidified themselves on both ends. He said John Simpson did not have a very good grade from the game Saturday night, but Pollard had a good game, as well as Cade Steward in making his first start. Stewart will be starting again on Saturday. We talked to Cade for the first time on Monday, and he is a fun, entertaining interview. You can watch that, along with the coordinators and several other players HERE.
I also asked Dabo about the punter situation and how close it is right now between Spiers and Carson King. Spiers had a relatively good game at A&M with a 51-yard punt and landing 3 inside the 20, but he had the 22-yard shank on the rugby style punt at the end of the game when they really needed a good punt. You could tell Dabo was disappointed in that one, but he agreed that Spiers had a pretty good game otherwise. He said King is close, but it sounds like Spiers still has a good hold on the starting spot.
Players of the game at A&M were Tee Higgins on offense, Clelin Ferrell on defense and Big Dex on special teams because of his blocked field goal that wound up being the difference in the final score.
Dabo concluded the press conference by telling us where he was and what he was doing 17 years ago on 9/11. It's definitely worth a listen! You can watch the full video below.
We talked to JD Davis and Hunter Renfrow after Dabo's press conference and learned that Davis will be one of the captains on Saturday. It will be the first time for him and quite an honor for the son of Clemson legend Jeff Davis. I asked JD if his dad knew about it yet, and he said he did not but that he would definitely be thrilled about the honor. Davis said he asked Dabo if there was a way he could still run down The Hill despite having to be on the field for the coin toss. To his relief, Dabo said that he could. Davis said he would have second thoughts about being a captain otherwise because he only has a handful of home games left in his career and enjoys The Hill entrance so much. Davis is always an enjoyable interview. I asked him about facing another option-oriented offense for the second time in three weeks, and he said it will be a good primer for Georgia Tech, who the Tigers will face next in Atlanta. I also asked him about the defense's overall performance in College Station, and he said it was good to have some weaknesses exposed while still coming away with a win because it will allow them to improve.
Finally, we spoke to Renfrow, who is always a good interview. He spoke a little bit about playing in that Notre Dame hurricane game of 2015 and how the wetness affects catching the football. "Hopefully in practice this week we can kind of emulate that. Maybe do some wet ball drills," he said. I asked him how he thinks Kelly Bryant is different as a quarterback compared to this time early last season when he was still cutting his teeth as a first-time starter. Renfrow said he thinks Kelly is more patient in the pocket and that he doesn't try to do too much. Renfrow recovered the onside kick on Saturday to seal the game, and I asked him to talk about all the onside kicks he's recovered in his career and what it's like being relied upon in such an important situation. "It's a play just like any other play in the game to me, just like third down or first down. It's just a play in the game. We practice it out here, and we're supposed to execute it."
We only got the two players and Dabo today, but we had interviews with 9 players on Monday in addition to Venables and Elliott. You can watch all of those in full HERE. We'll have our weekly post-practice interview with Dabo on Wednesday evening, and don't forget to check back on Friday morning for the What We Are Hearing, my weekly extensive game preview and prediction!