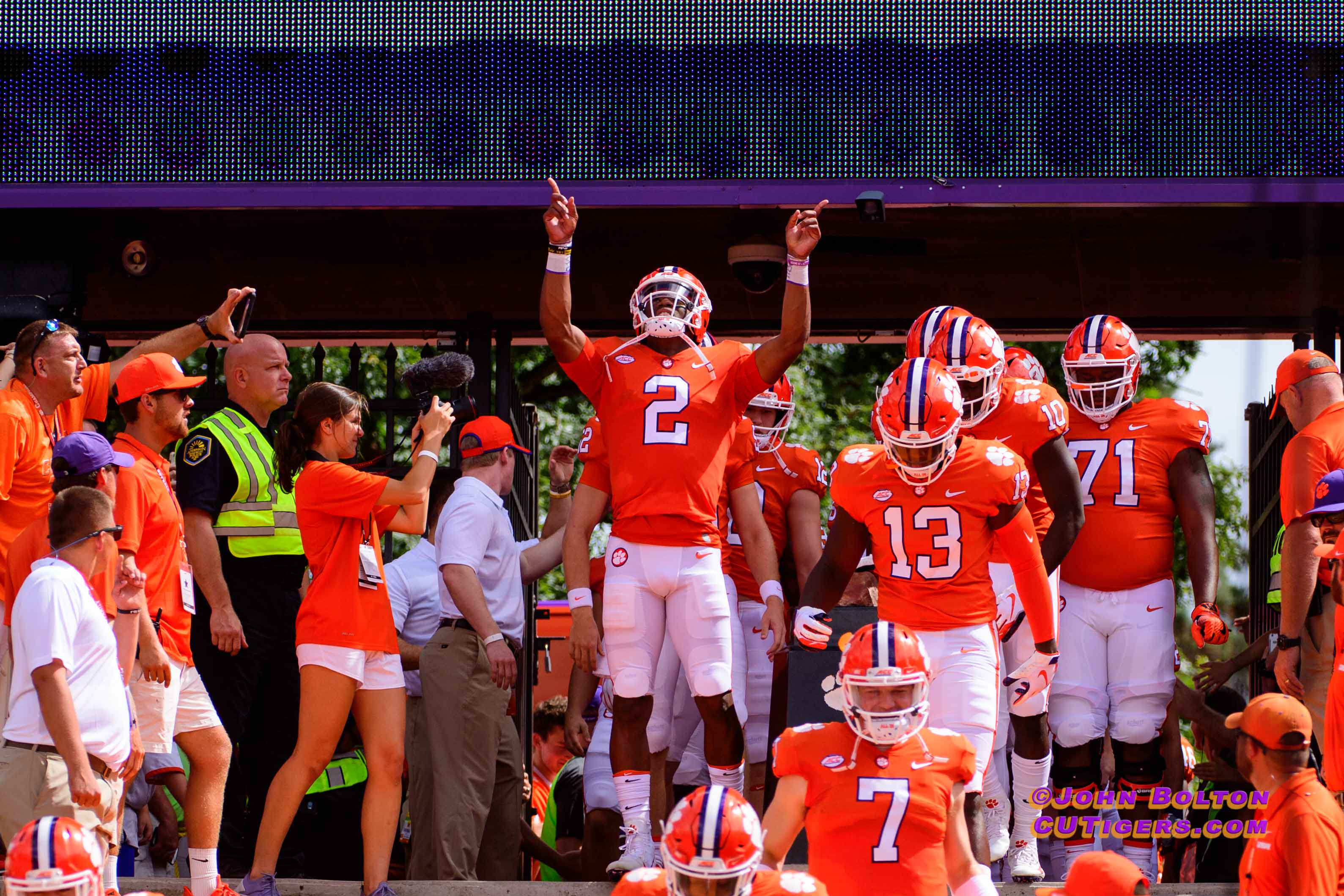 BOX SCORE
CLEMSON, SC - Well, it wasn't the prettiest game, but the Tigers looked much better defensively and took care of business against Georgia Southern in front of over 70,000 in Death Valley, despite the weather and change in game time. The big story of the game was the injury to Kelly Bryant in the first half. He hit the ground hard, possibly landing on the football, and we were told he bruised his chest. We were also told by a source shortly after the game that Bryant was on his way to the hospital for a CT scan. The Tigers didn't miss a beat with Trevor Lawrence, though, as he expertly directed the Tigers' offense to 24 points before Chase Brice later added a touchdown in the 4th quarter. Before leaving the game, Bryant was 7-10 for 68 yards. He also ran for 27 yards, including a 17-yard carry. 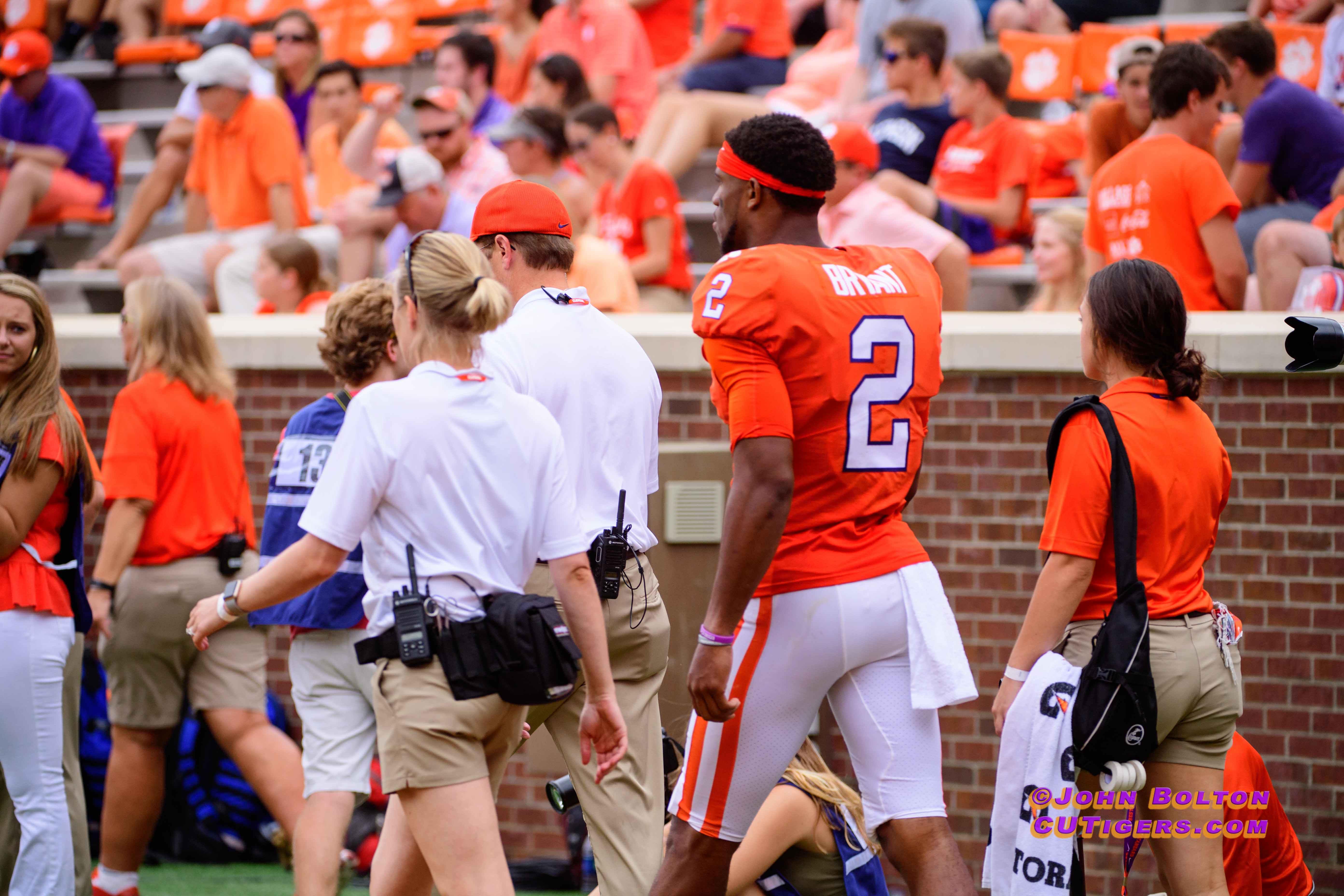 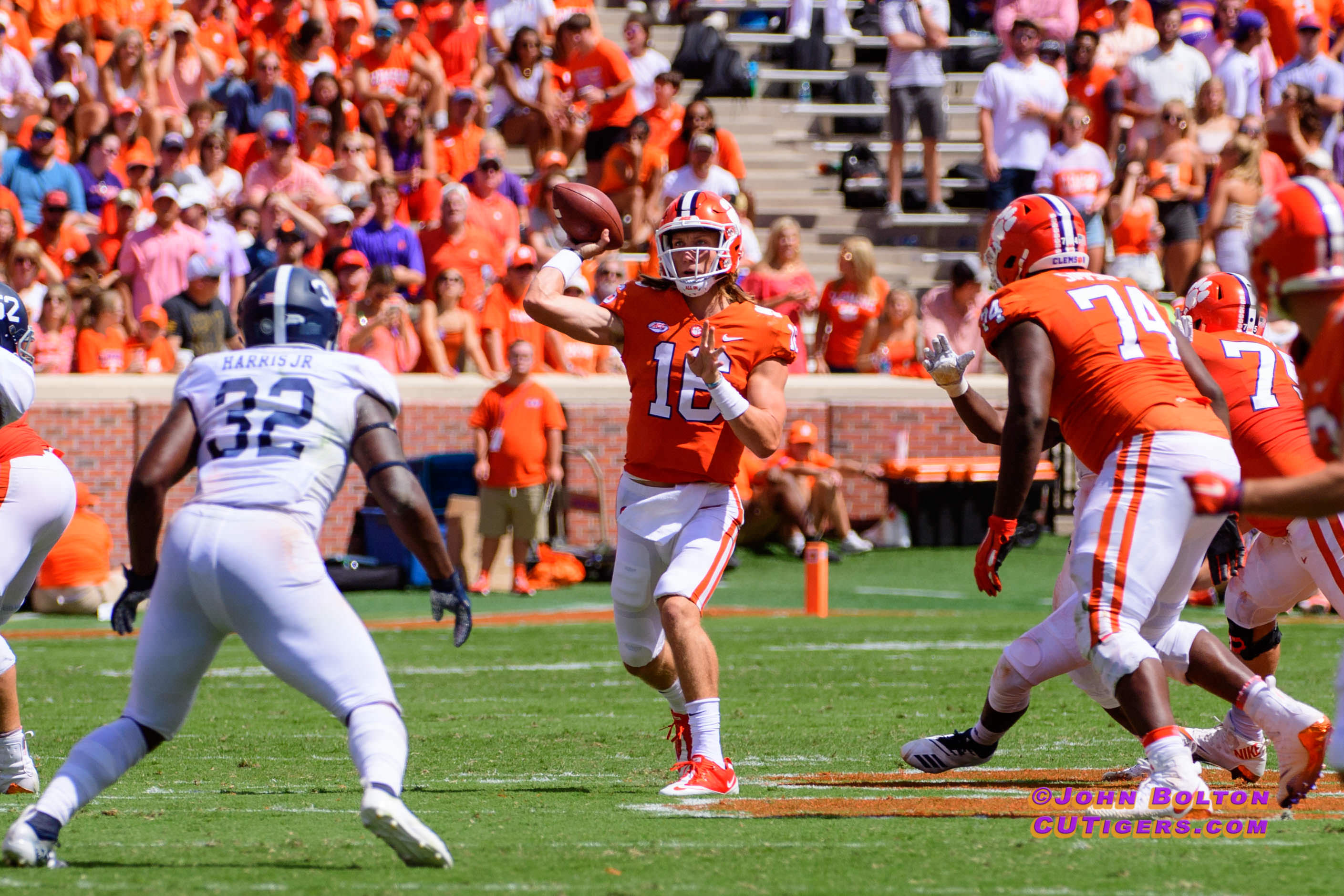 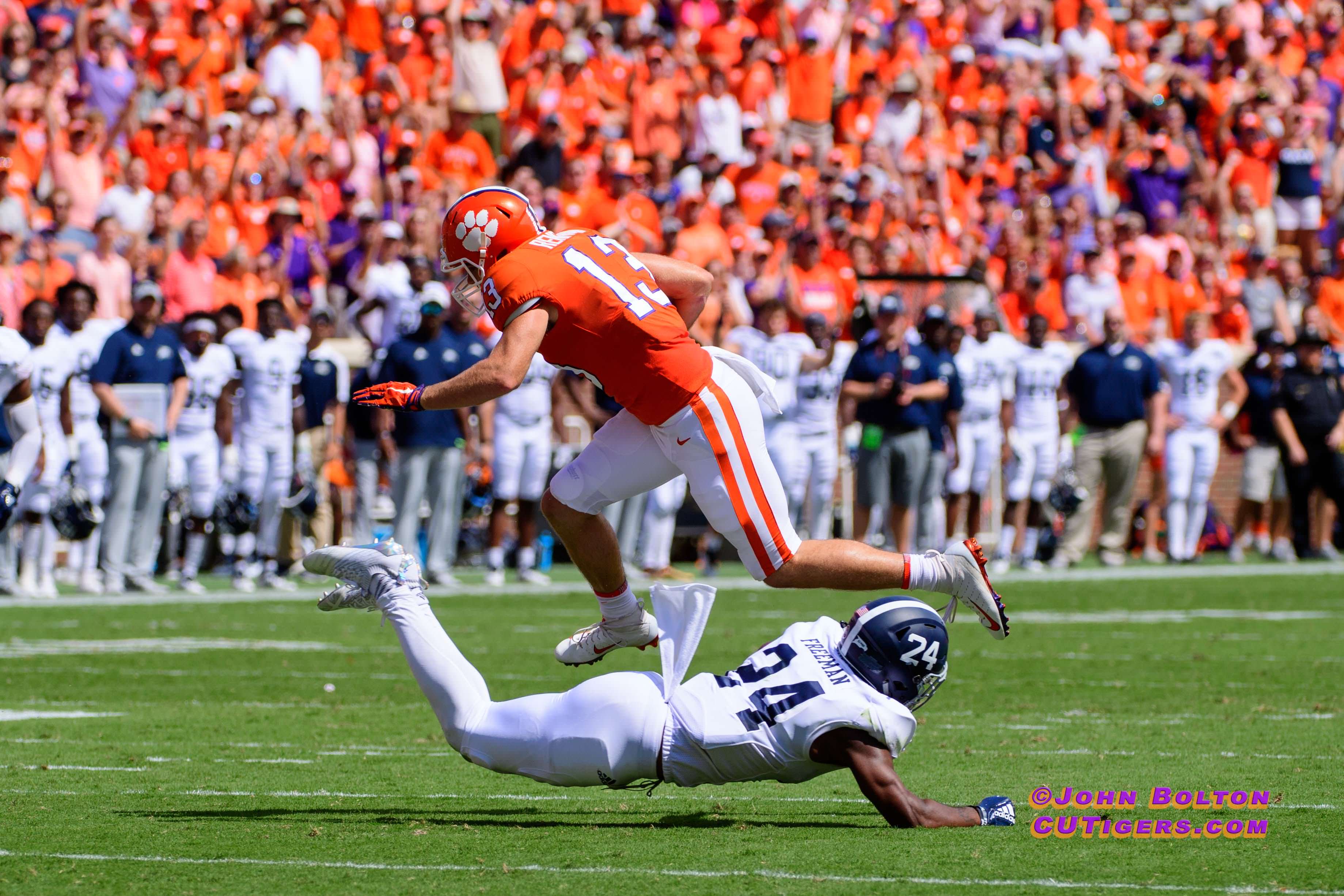 Lawrence's first possession ended with an Adam Choice fumble, but he connected with Renfrow for 31 yards on the next drive, leading to an Etienne touchdown run to put the Tigers on the board. On the following possession, Bryant came out of the game on 3rd down and Lawrence found freshman WR Justyn Ross for a 57-yard touchdown. It was just Ross's third catch in less than 2 games played, but it was his second touchdown of the young season. 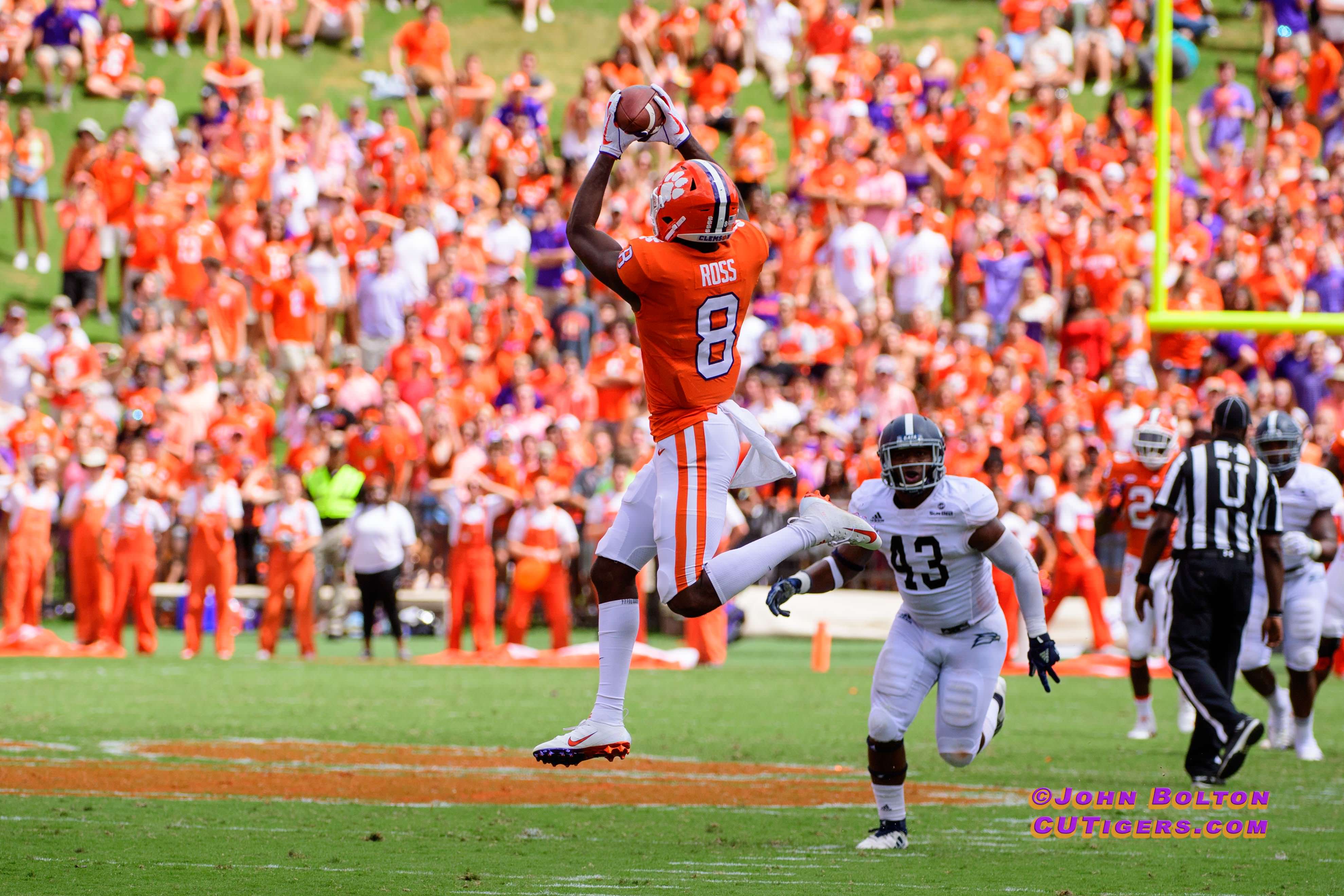 The explosive plays were in abundance for the Tigers. They were the only team in the nation with 6 plays of 40 yards or more coming into the game, and they added two more on Saturday, along with several more over 20 yards. Georgia Southern had only allowed one play over 20 yards in its first two games. In addition to the aforementioned long plays, Etienne broke a 40-yard run for his second touchdown of the game and also had a 35-yard run, Choice had a 32-yard run and freshman TE Braden Galloway had a 20-yard catch. 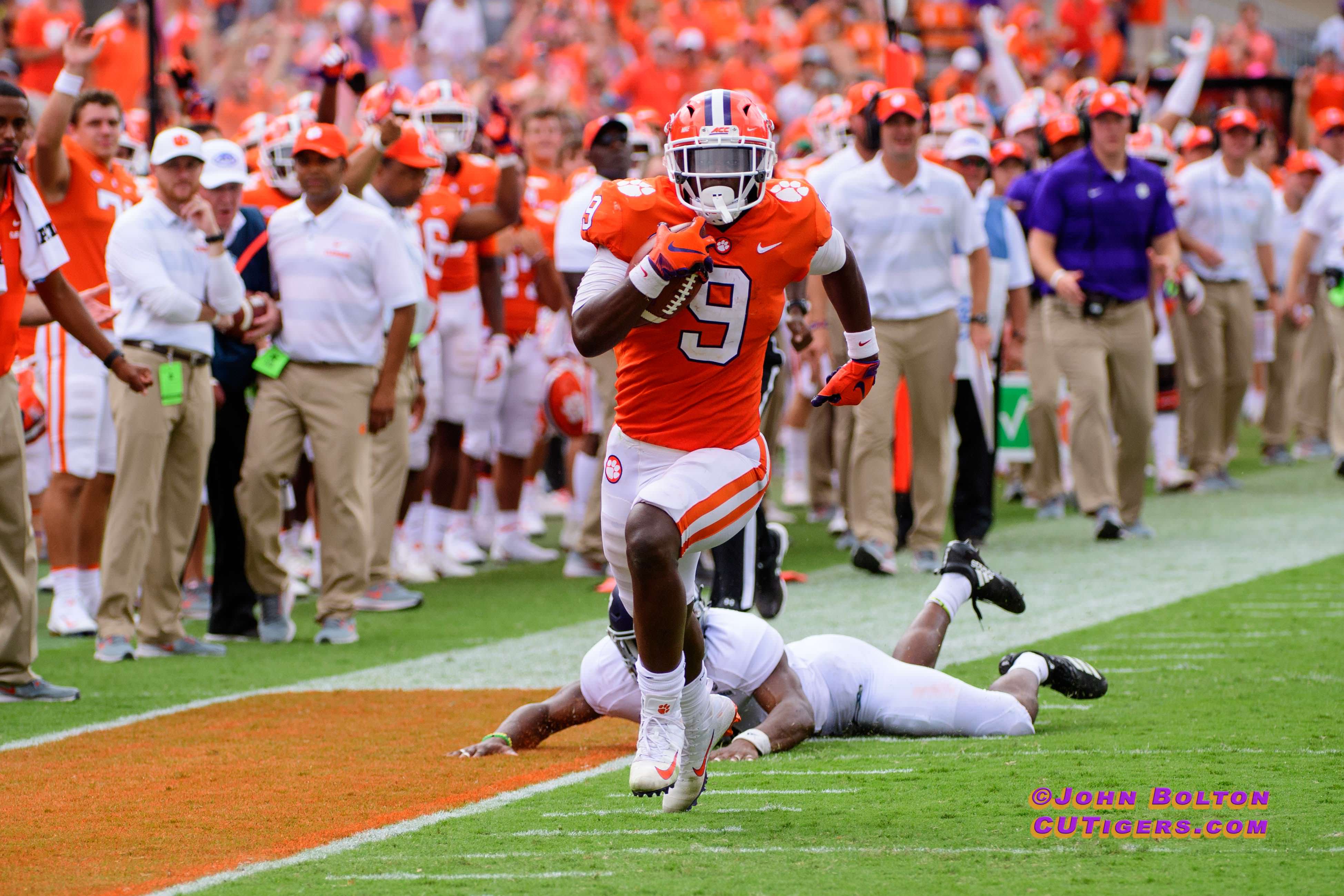 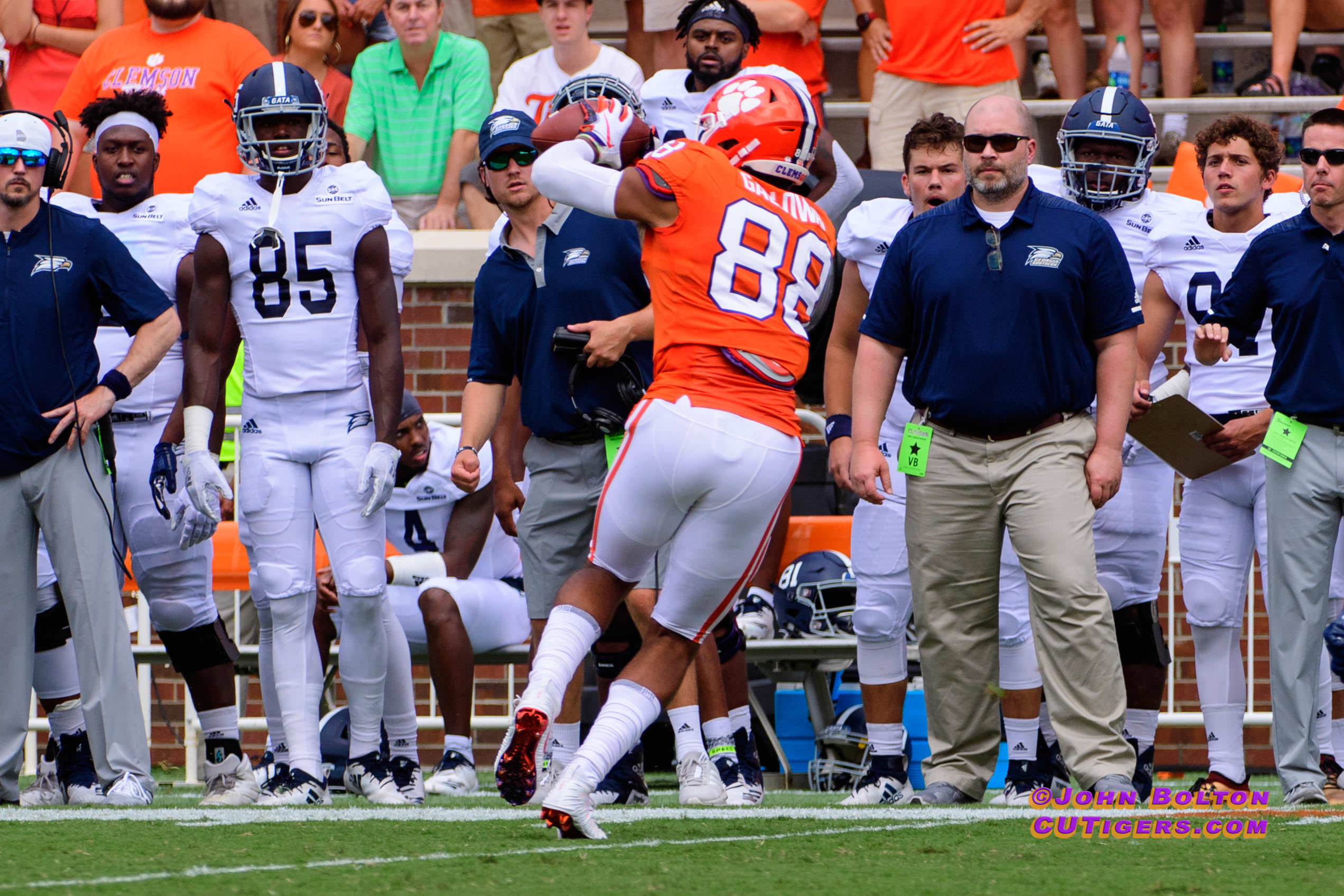 The biggest negative of the game for the Tigers was their 3 turnovers. Clemson was one of just three Power Five teams and five teams in the nation without a turnover coming into the game. Fellow heavyweights Alabama, Georgia and Ohio State each had 2 giveaways in their first two games. In addition to the aforementioned fumble by Choice, Kelly Bryant had a bad interception and Lawrence also threw a pick. On the former, Bryant stared down the receiver, making a poor decision to throw into tight coverage and an even poorer throw to the defender side. Dabo said that freshman TE Braden Galloway blocked the wrong player on the screen, but Kelly should have recognized that and checked down to a different receiver or run the ball. Lawrence's interception was batted in the air at the line of scrimmage and caught by the defender. Still, if you're going to have a game like that, it's good to have it in a blowout win as opposed to on the road at a place like Texas A&M! I guess you can say when it rains, it pours. Ironically, it did not rain during the game thanks to the early kickoff change. It was good to see Adam Choice redeem himself later with the 32-yard run and a nice touchdown run, in which he contorted his body to stretch across the goal line (see below). 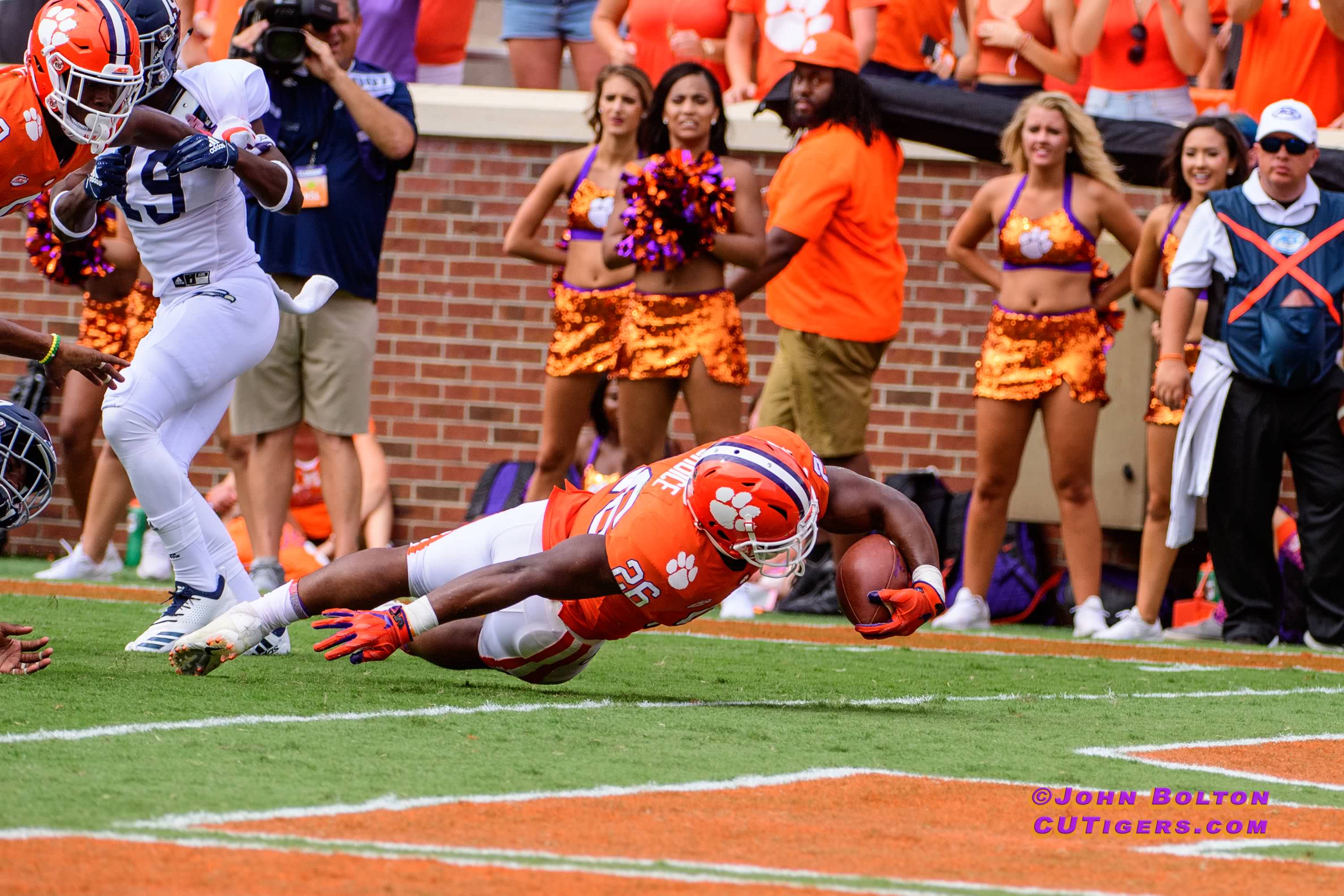 The Tigers' defense was superb and much improved from last week's performance in which they gave up 430 pass yards. The only score they allowed came in the 4th quarter on a trick play with a wide receiver pass. The Tigers managed to sack the quarterback 5 times--something difficult to do in any game, let alone against an option offense with an extremely mobile quarterback! Austin Bryant collected his first two sacks of the season, Clelin Ferrell added two more and freshman Xavier Thomas recorded his first career sack of many to come. Ferrell now has 5 sacks on the season. It was his third straight game with a sack and second straight game with 2 sacks. The defense allowed just 140 yards--80 on the ground and 60 through the air--and 7 first downs. They also created a turnover for the 11th straight game when DT Nyles Pinckney forced and recovered a fumble. 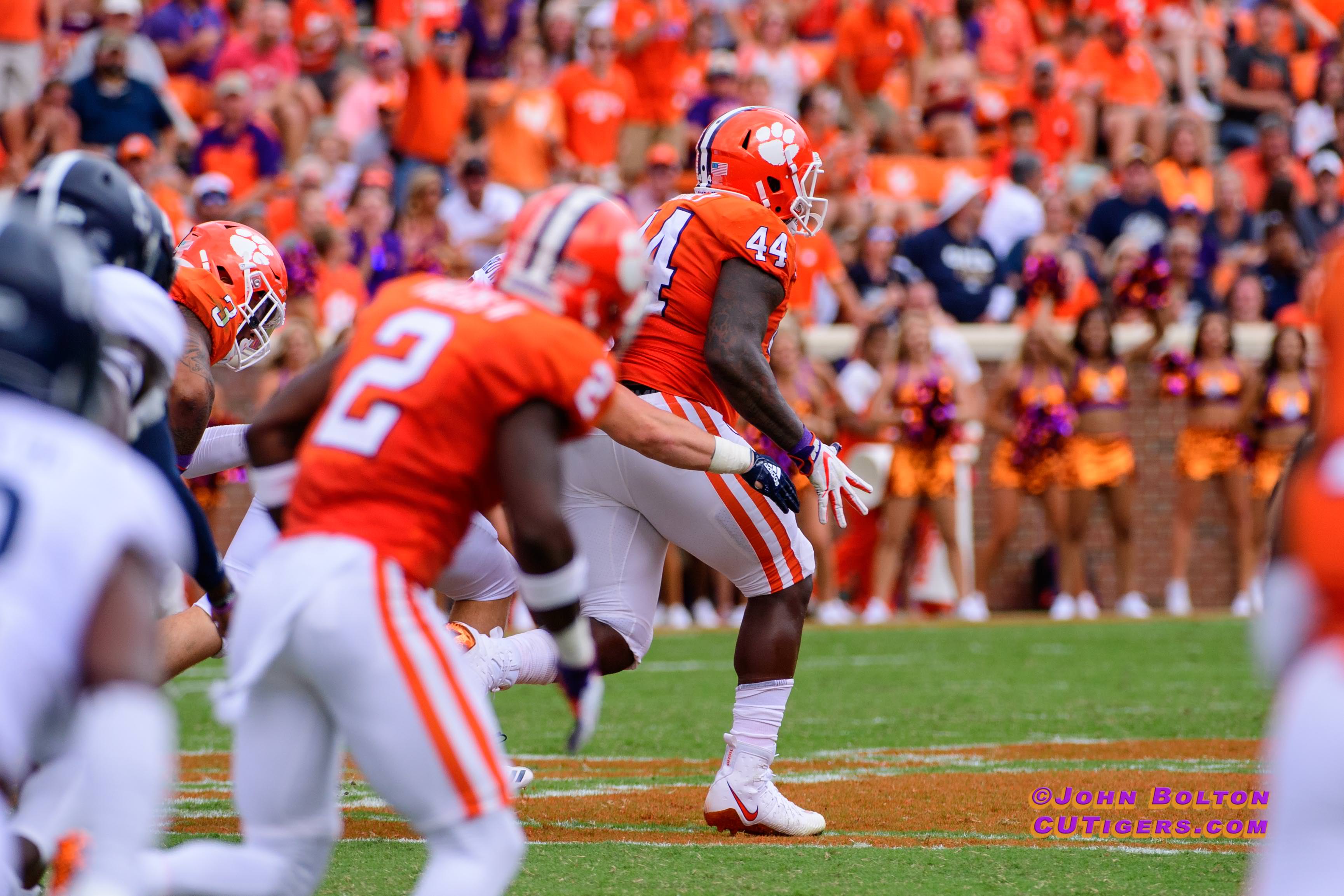 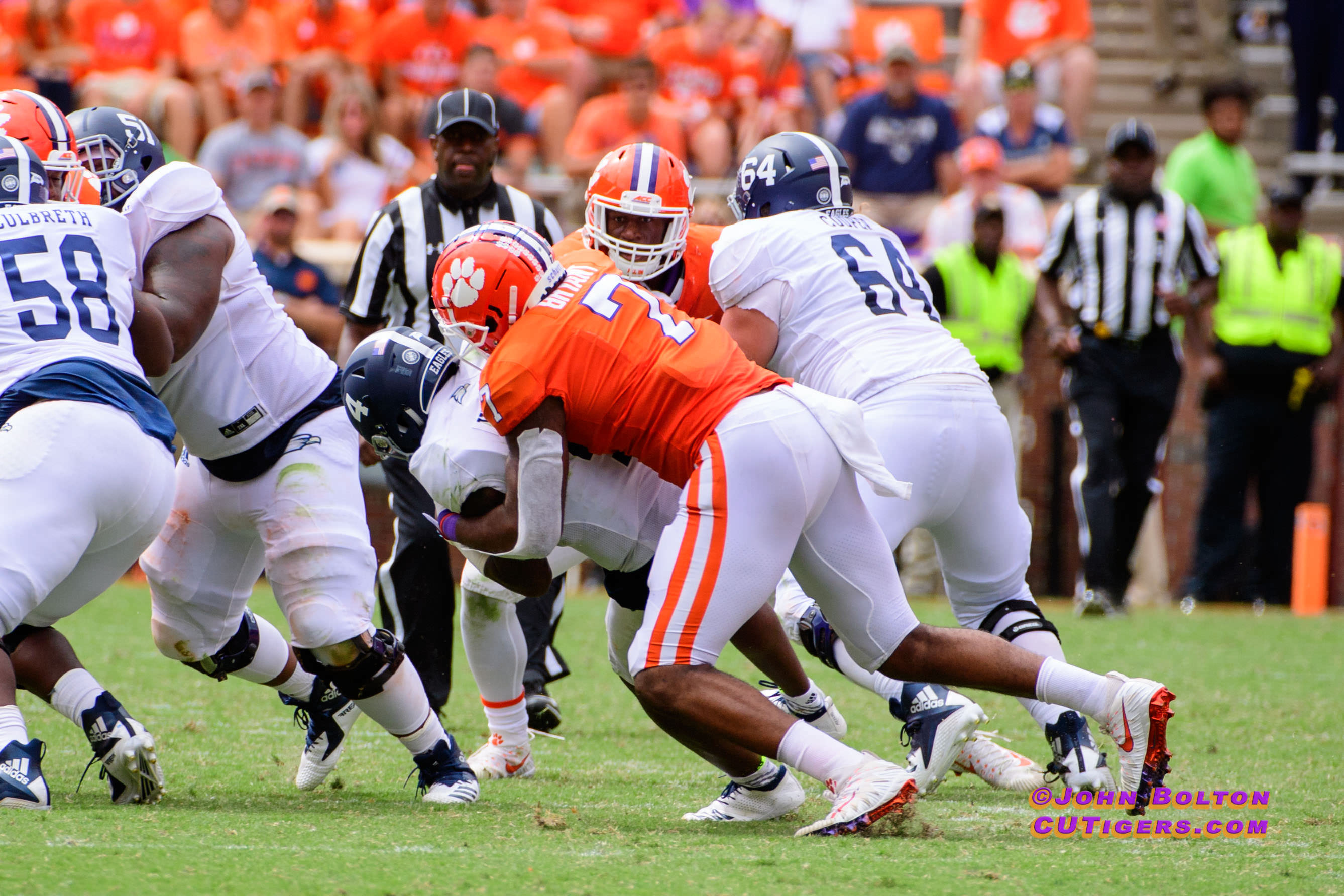 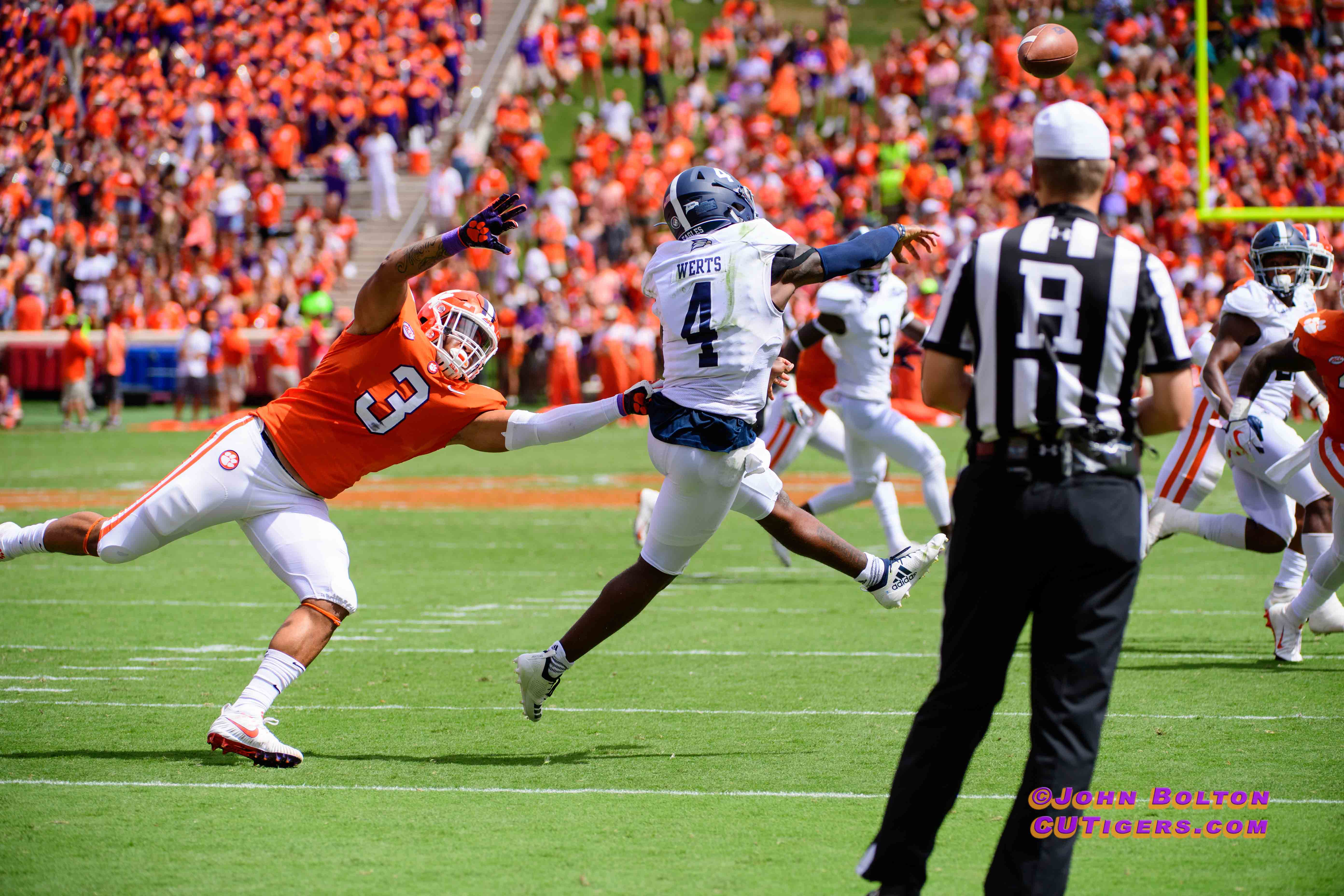 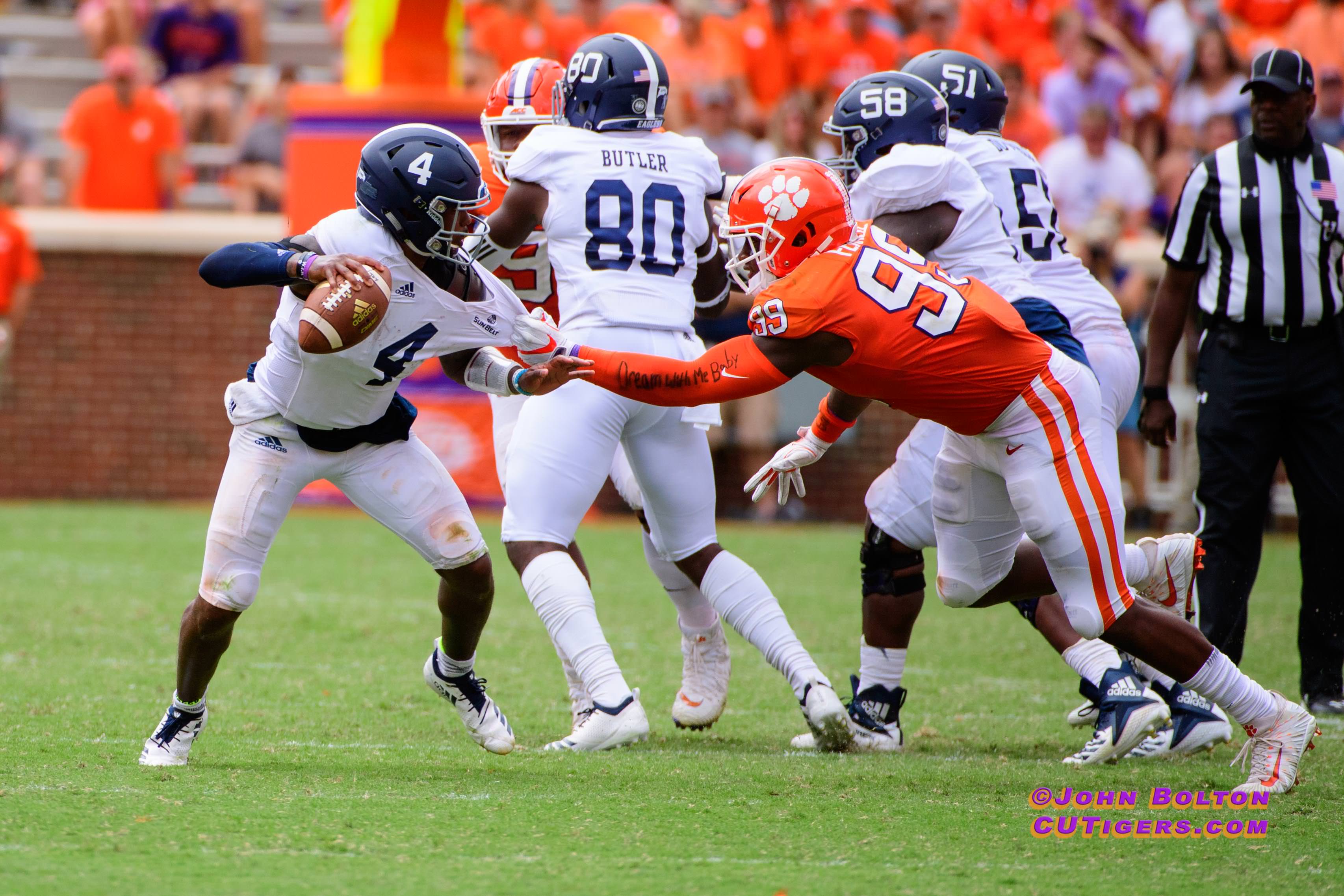 Special teams did not have their best game. The usually reliable Greg Huegel was 1-3 on field goals, missing from 39 yards and 47 yards. He might have been affected by the wind, which was gusting hard throughout the game with the hurricane just a couple hundred miles away. Potter was excellent on kickoffs again, however, allowing just one return that went for 10 yards. Amari Rodgers had another great punt return that was negated by a penalty, which was obviously disappointing. 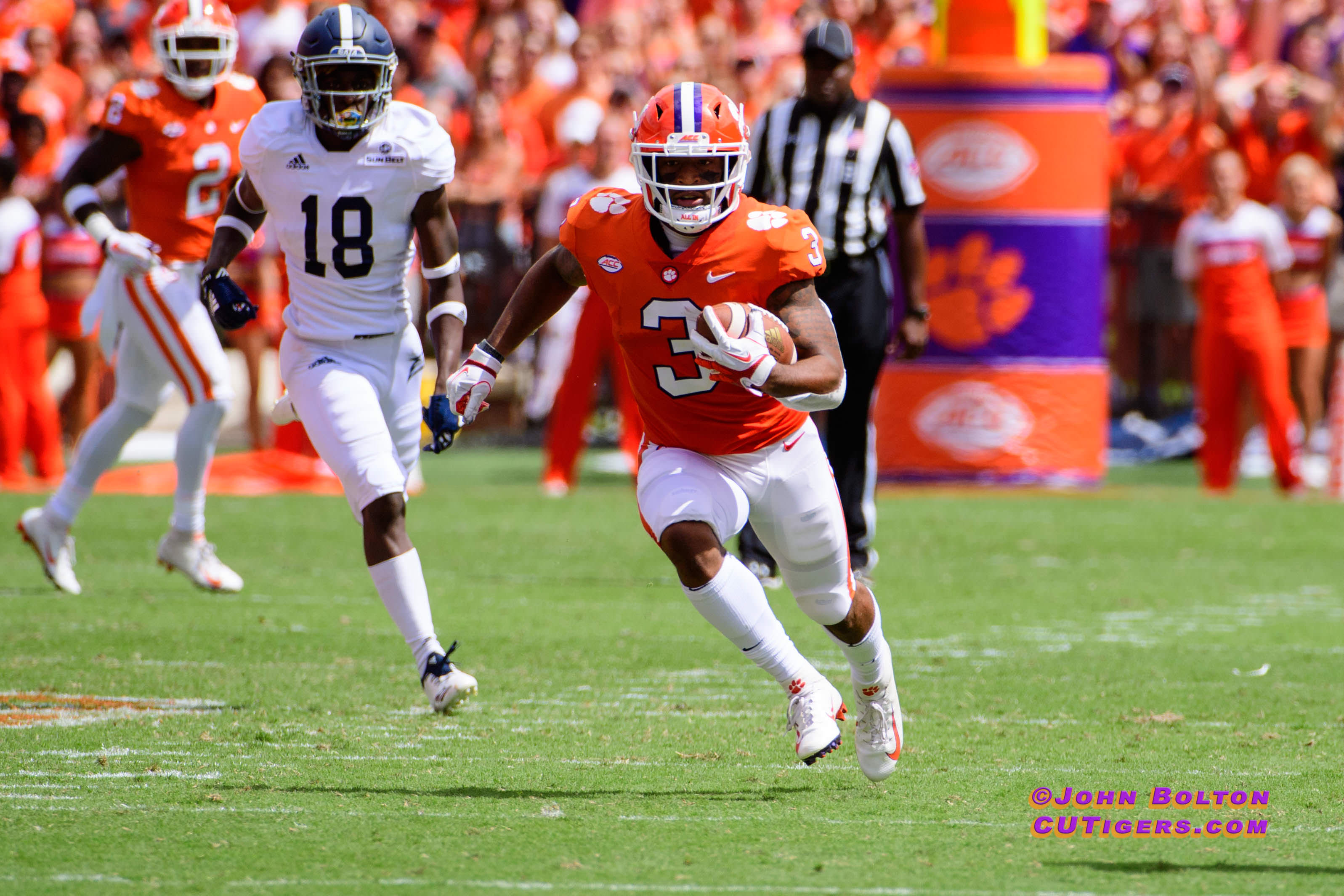 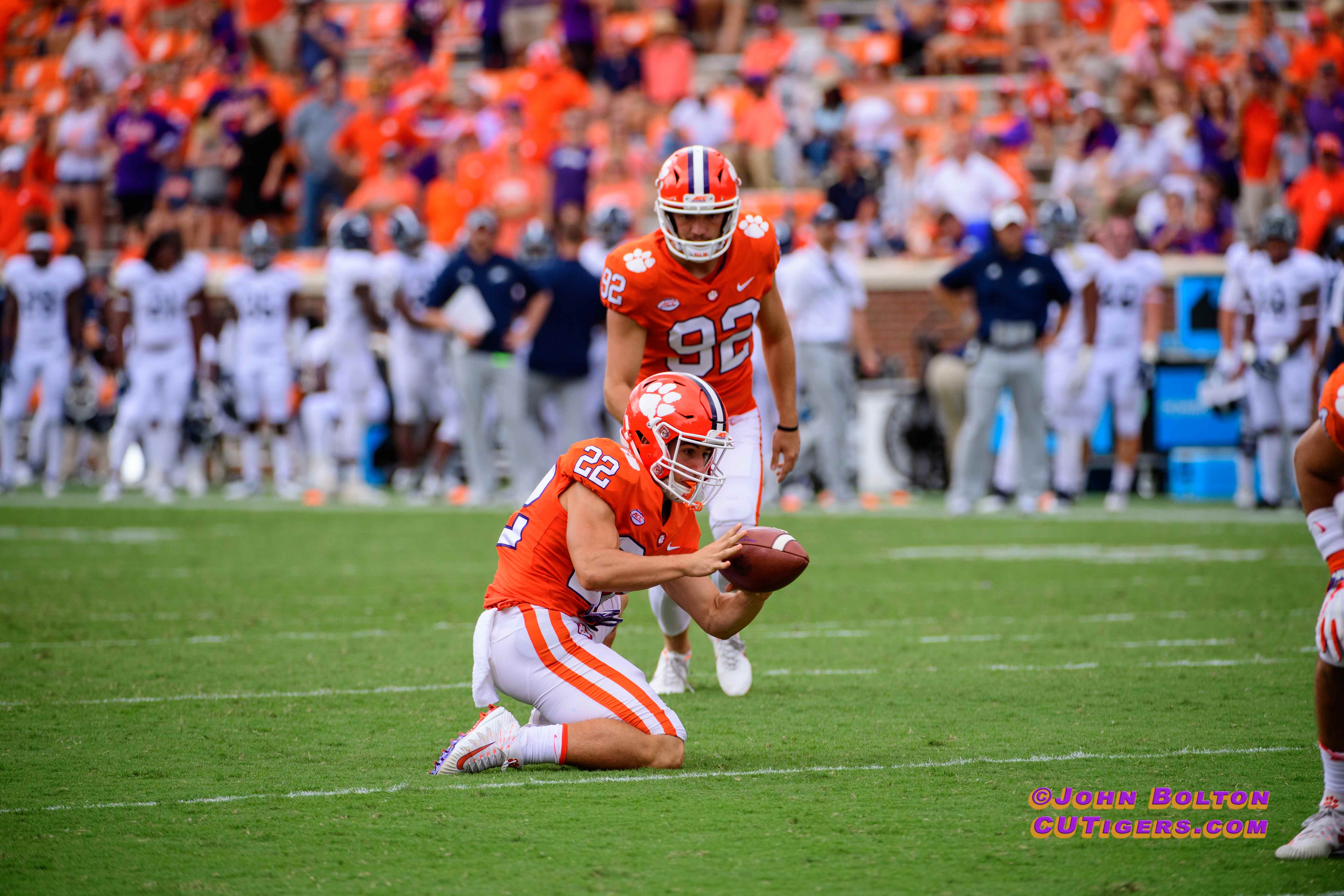 All in all, the win was just what the doctor ordered for this team that survived a scare on the road last week. They improved on defense, the tempo on offense was much better (running 77 plays after just 59 last week) and they were able to play a ton of players. In fact, 14 different players caught a pass, including Will Swinney. Chase Brice was able to get into the game and threw a strike to Ross for 17 yards to set up a Choice touchdown at the end of the game, showing that Brice is perfectly capable of running this offense if necessary. As Dabo said in August camp, they have 3 quarterbacks with whom they can win. The starter went down early, but the Tigers didn't miss a beat. That is the natural benefit to this competition that has played its way into the season. Last year when Kelly was injured before the Syracuse game, the Tigers didn't have a QB that was ready to step up and it cost them their only regular season loss. If Kelly were to miss a game or more this season, the Tigers will be just fine.
I'll have more coming, including a photo gallery, and don't forget about our Sunday evening teleconference with Dabo. I should have an update on Kelly Bryant at that time!
DABO PC AND POST-GAME INTERVIEWS