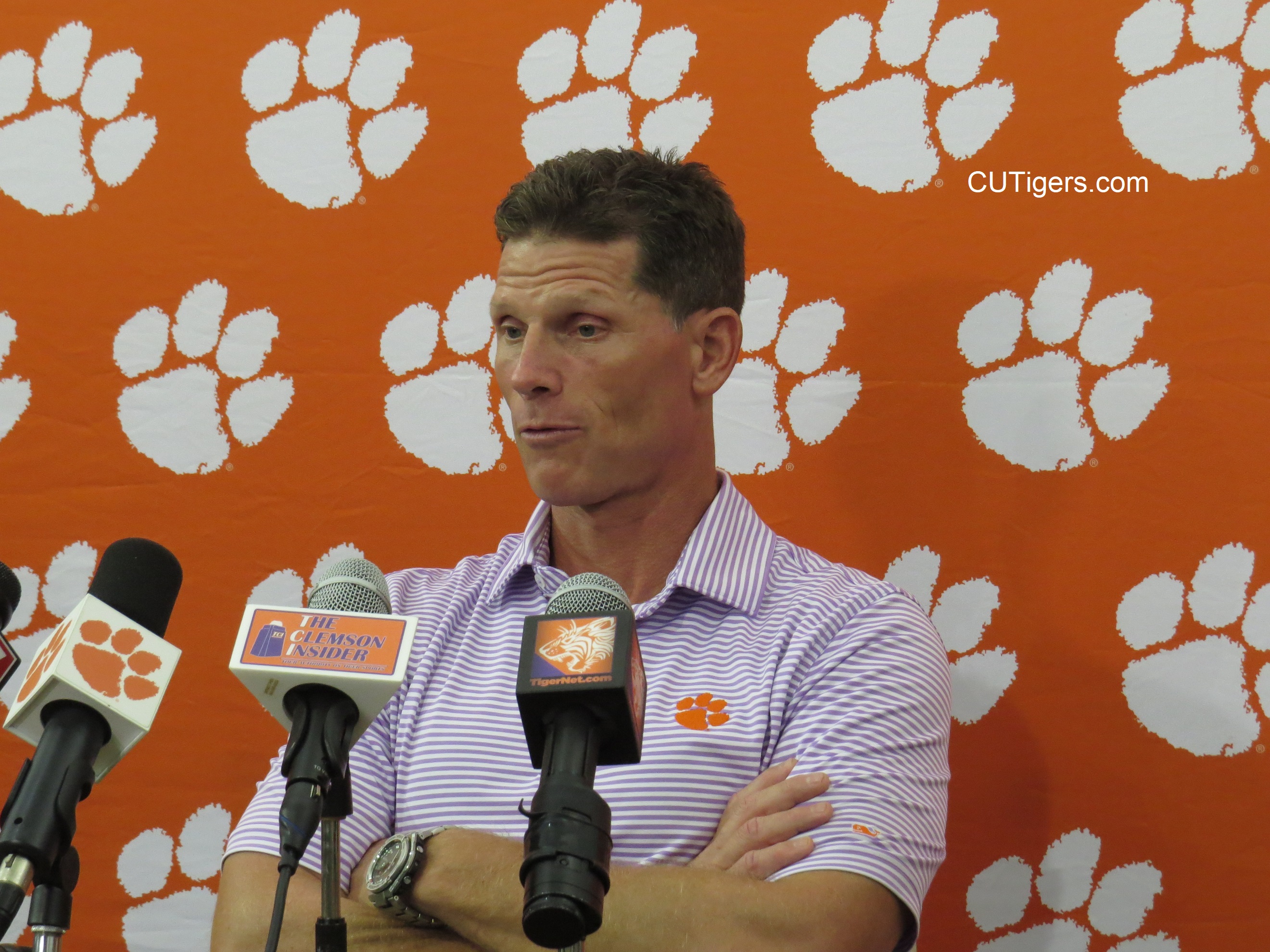 We talked to Brent Venables, as always on Mondays, and Jeff Scott in addition to Trevor Lawrence, Xavier Thomas, Trayvon Mullen and Adam Choice.
Venables was somewhat loose compared to year's past when we'd interview him just days before playing Paul Johnson's triple-option offense, but there was still a noticeable difference in his demeanor between last week and today. He told after the game on Saturday that there is no magic elixir for defending Tech's offense, so I asked him what it is exactly that has enabled him to hold Tech to just 209 total yards per game over the last 4 years. He said that it's having talented players, but more than that it's discipline and attention to detail. Venables gets his group prepared for that offense better than any other coordinator in the nation, and it starts way back in the spring. The Tigers prepare for cut blocks and the triple-option to an extent in spring practice as well as August camp, and that preparation has paid off big-time for the Tigers. They allowed just 124 total yards the last time they played in Atlanta two years ago! I also asked Venables about Tech losing their 1,000-yard back from last season, and Venables said he thinks their system is plug-and-play, meaning their personnel isn't as important as their scheme. The Jackets have been divvying up the carries between two backs so far this season, Mason and Howard, as well as, of course senior QB Taquon Marshall.
Jeff Scott was obviously very pleased with the receivers and the offense on Saturday, with the exception of the 3 turnovers they had. He talked a little bit about the quarterback play and a few other subjects. I asked him if they hope to work Derion Kendrick into the punt return rotation anytime soon despite how well Amari Rodgers has played in that spot. He said Amari has had such little experience in games because of Ray-Ray last year, that they want to get him as many opportunities as they can. However, he did say DK is coming along and right about where Amari was this time last year. Scott said that DK is so explosive that they definitely want to get him some opportunities later in the season.
Trevor Lawrence, of course, was all smiles today after a great performance on Saturday despite all the pressure of knowing it was his offense for the rest of the game. Trevor is a strong Christian, and he told us he draws inner-strength from his faith, and that allows him to block out all the outside noise and just play. He is mature beyond his years! You can see why he was able to make his road debut in front of over 100,000 at A&M and casually throw a 64-yard touchdown on his very first play. I asked Trevor after the game on Saturday if the wind affected his passing at all, and he said he didn't think so, although he admitted to putting a little more zip on the ball at times because of it. Trevor is from Cartersville, GA, which is about 45 minutes away from Atlanta, so he said he will have lots of family and friends in the stadium on Saturday. It will be the first time he's set foot in historic Bobby Dodd Stadium!
Finally, we spoke to Xavier Thomas for the first time in this setting, and he is a very natural interviewee--probably thanks to his experience with recruiting reporters in high school. I asked him to take us through his first career sack on Saturday, and he also talked about being mentored by Clelin Ferrell. I asked him if it seems easier at all in college because he saw so many double teams in high school, and he said it is definitely a big difference because teams can't do that with all the talent on the Tigers' defensive front.
Watch all of the full interviews below! And don't forget to check back tomorrow for Dabo's weekly Tuesday press conference, followed by more player interviews.