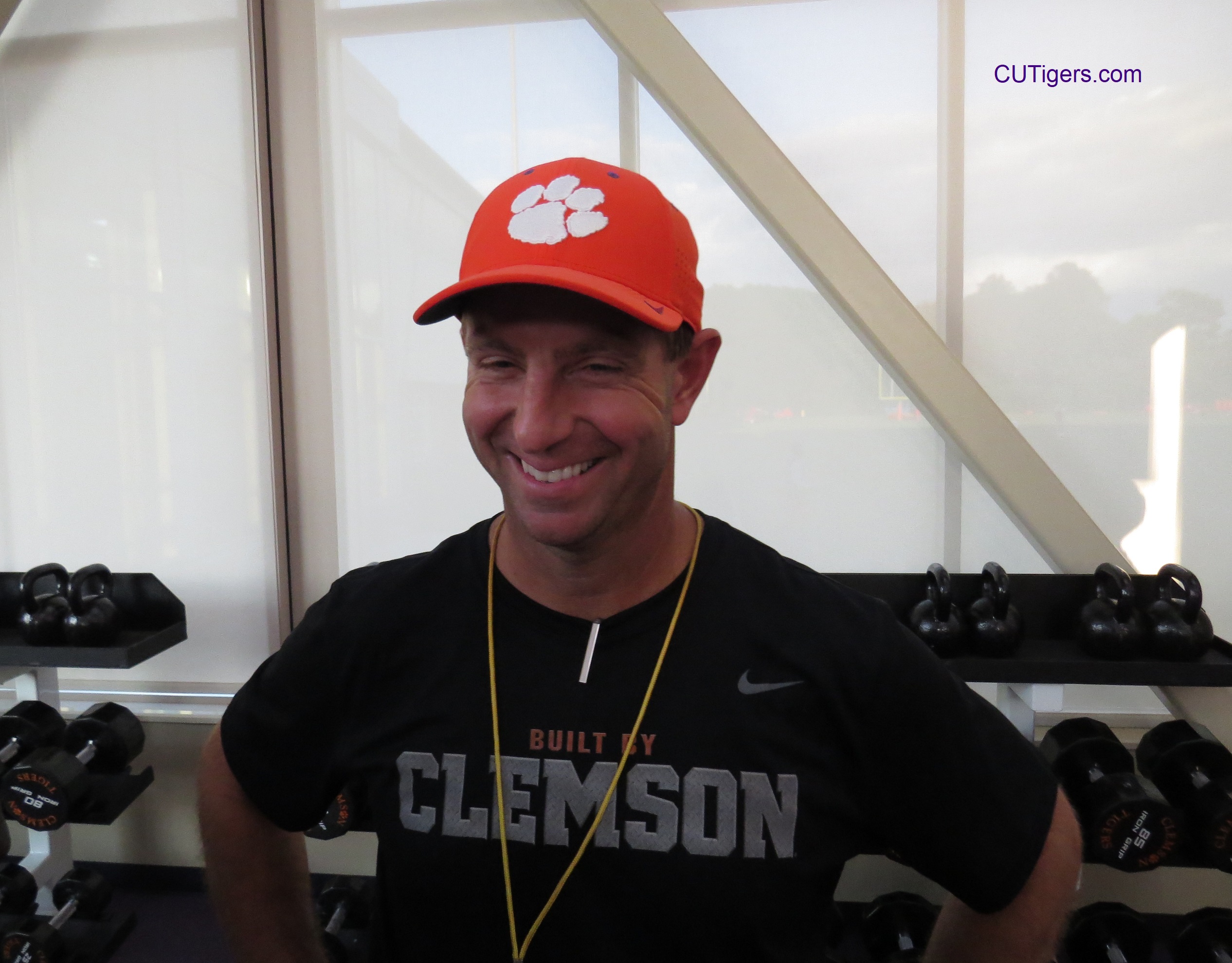 We had our weekly post-practice interview with Dabo on Wednesday evening, and he said they've had a good week of practice. I asked him if Kelly had any lingering effects or breathing issues from his chest injury, and Dabo said he did not. Kelly told us on Monday that he felt 100% and was ready to play that day.
Dabo spoke a little about the difficulties the Tigers have had playing the Jackets in Atlanta over the years. Indeed, the Tigers lost 5 straight trips to Bobby Dodd over a 10-year period before dominating Tech 2 years ago and going on to win the national title. You could see some of the angst on Dabo's face as he was recounting some of the "flukish" losses he experienced down there, even as an assistant coach. For example, in 2005--the first of five straight losses--Clemson was the only team in the nation that hadn't fumbled the ball yet. It was James Davis's freshman year, and he was having a great season, but on that day fumblitis struck the Tigers with a vengeance. They fumbled the ball 5 times and also had an interception, losing 10-9! The next trip, in 2007, converted soccer player Mark Buchholz--a reliable kicker for the most part in his career--missed 4 field goals, and the Tigers lost 13-3. And he made a 48-yarder at the start of the game to take a 3-0 lead! Then, of course, there was the Thursday night 2009 game, in which official Ron Cherry made the infamous "phantom hold call" on Thomas Austin that negated the game-winning touchdown for the Tigers. In 2011, the Tigers were undefeated and ranked in the top-10 going into Atlanta. Andre Ellington was injured early in the 1st quarter, and the Tigers were beaten badly. All of this culminated in 2014 when Deshaun Watson drove the offense right down the field in the 1st quarter and then tore his ACL. Cole Stoudt proceeded to throw 3 interceptions, including 2 pick-sixes, and the Tigers lost to the eventual ACC Coastal Champions despite their defense practically shutting the Tech offense out. However, the curse was finally broken in 2016, as the Tigers' defense held Tech to just 124 total yards, and Deshaun Watson and company did just about anything they wanted on offense, winning 28-6. We'll see if that gets a streak going in the Tigers' favor!
I also asked Dabo about Braden Galloway. He had a catch early in the game on Saturday, but Dabo took him out for the rest of the game after he blocked the wrong player on a screen, leading to Kelly Bryant's interception. Dabo talked about what a great player he's going to be and how he's much further along than Leggett was as a freshman, but he just needs to get the mental part of the game down. In fairness to Galloway, he's a basketball player by training and has had very little experience playing tight end, which is the most difficult position--other than quarterback--to learn in this offense. It will take a little time before Dabo is comfortable playing Galloway in an ACC road game like this one, but his time is certainly coming.
You can watch the full interview below! Don't forget, we have our annual fall baseball interviews with Monte Lee and players on Thursday afternoon, and I'll have the What We Are Hearing published by Friday morning, so stay tuned!