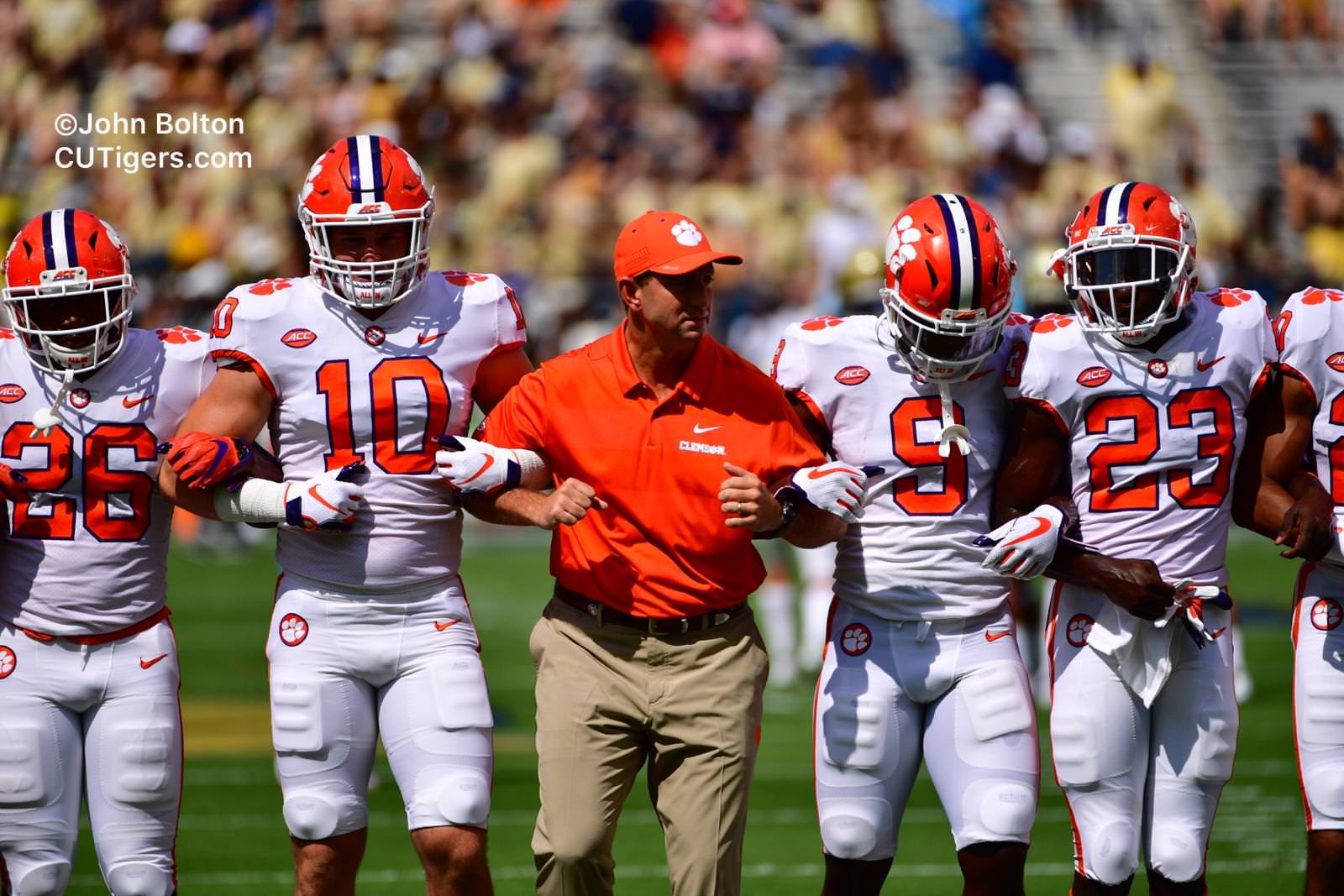 BOX SCORE
ATLANTA, GA - The loss of starting LB Kendall Joseph did not prove to be as detrimental as it might have seemed 24 hours ago. Joseph is the quarterback of the defense and has about as much experience defending the Paul Johnson offense as anyone. And it looked ominous for the Tigers on Tech's first possession to start the game, as they gashed the Tigers for a few big chunk running plays and looked poised to jump out to a 7-0 lead while chewing up half the first quarter in the process. But the Tigers' defense stiffened and wound up pushing Tech back out of field goal range. It was smooth sailing from that point on, and it was a total team effort from the Tigers on both sides of the ball, as they played numerous backups early and often on defense and saw several different players making plays on offense. 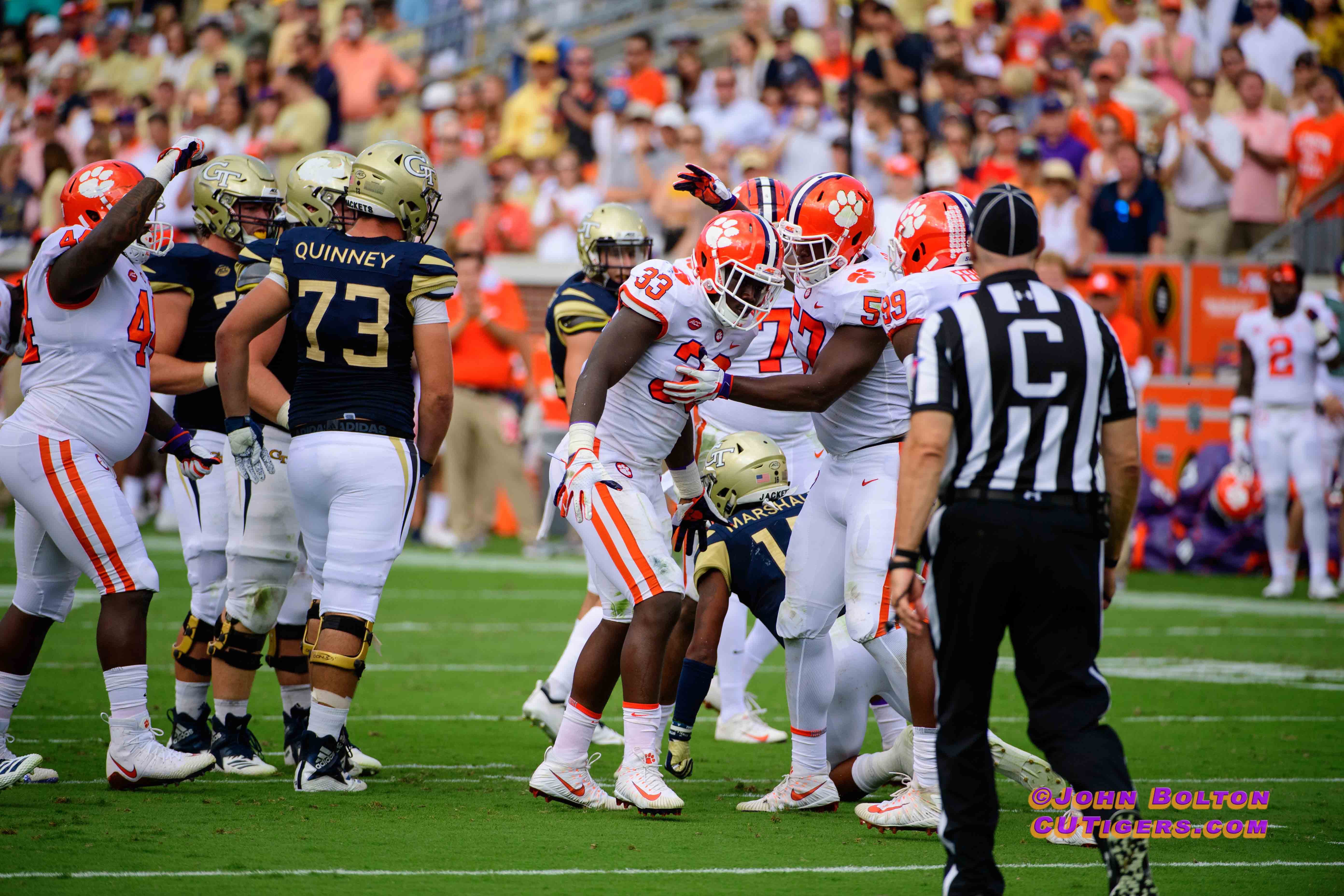 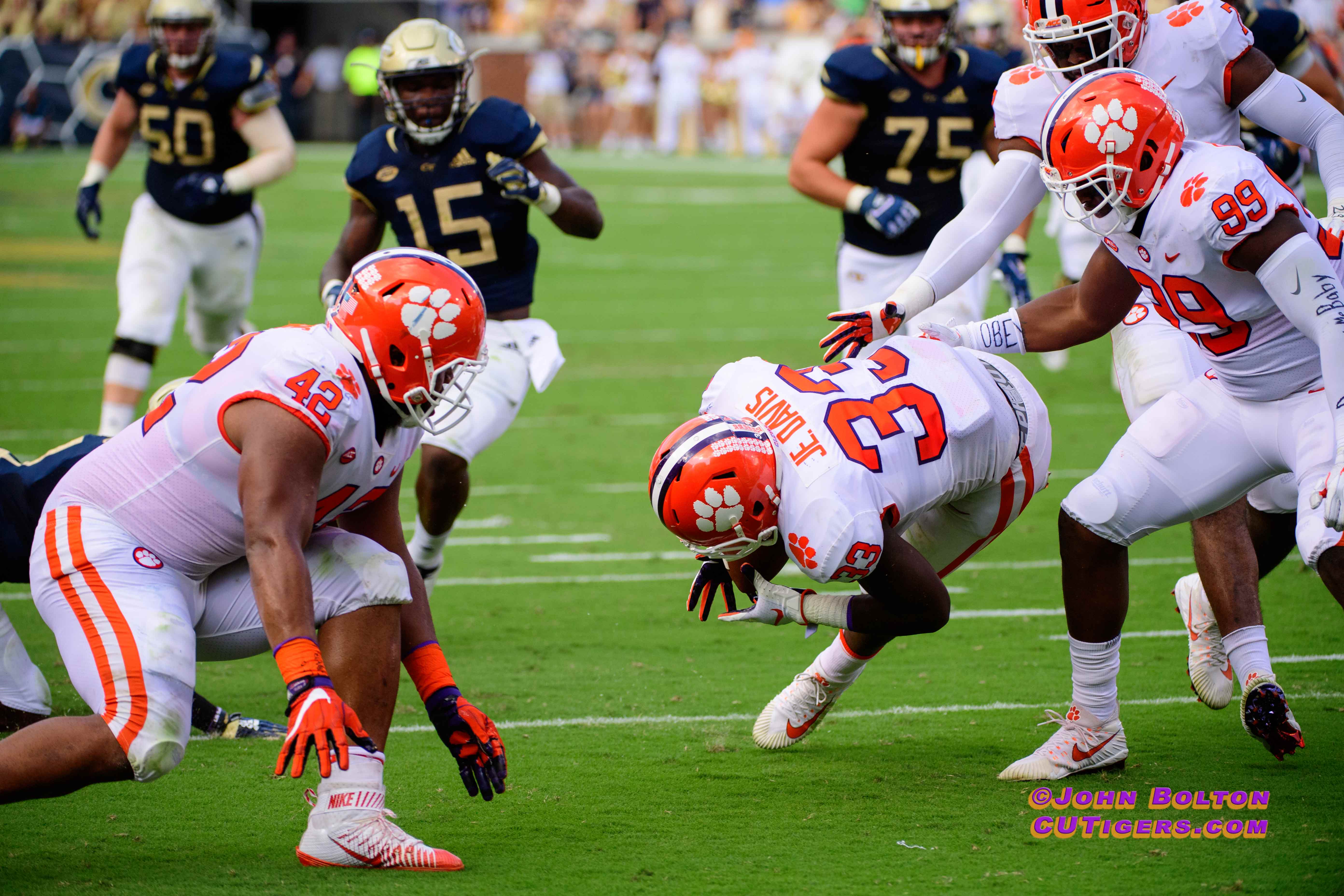 Trevor Lawrence took a big step forward today, essentially taking the game over after Kelly Bryant struggled to move the ball in his first couple possessions. Lawrence led the offense to touchdowns in each of his first two drives and led touchdown drives in 5 of his 6 possessions, throwing TD passes to 4 different players! The only possession in which Lawrence failed to find the end zone was when his pass deflected off the back of Cervenka's helmet and was intercepted. Otherwise, Lawrence was about as good as you can get. His debut at A&M was impressive, throwing a 64-yard touchdown to Higgins on his very first road play, but his exhibition today was even more impressive. He looked more comfortable with his reads, more confident and more decisive. And some of the throws he made--like the frozen rope to Renfrow for a touchdown, running to his left--would have been difficult for many NFL quarterbacks to make. I would be very surprised if Trevor does not make his first career start against Syracuse in Death Valley next week. Kelly Bryant came back into the game and played reasonably well, leading a touchdown drive, but the offense is simply better with #16 on the field right now. 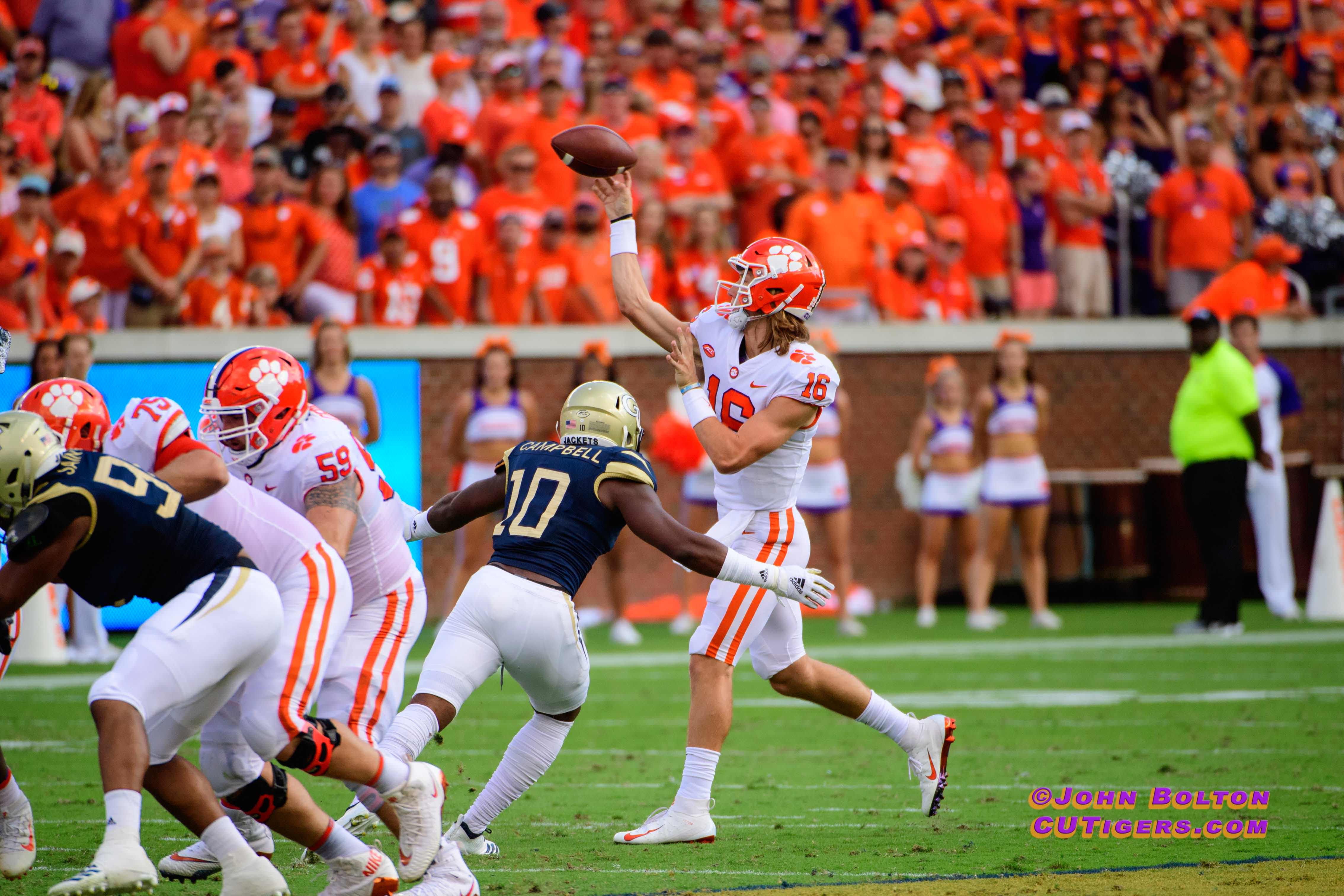 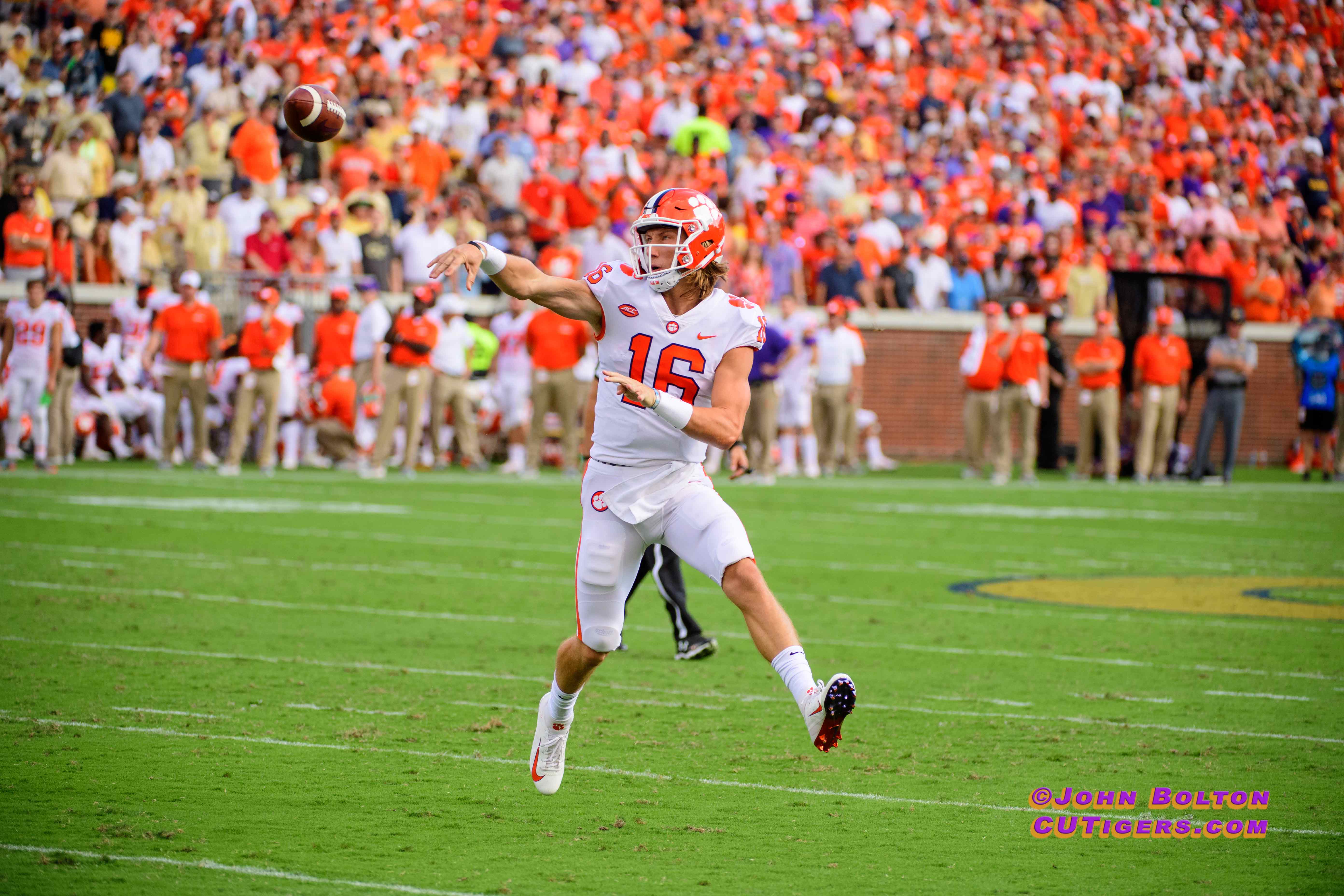 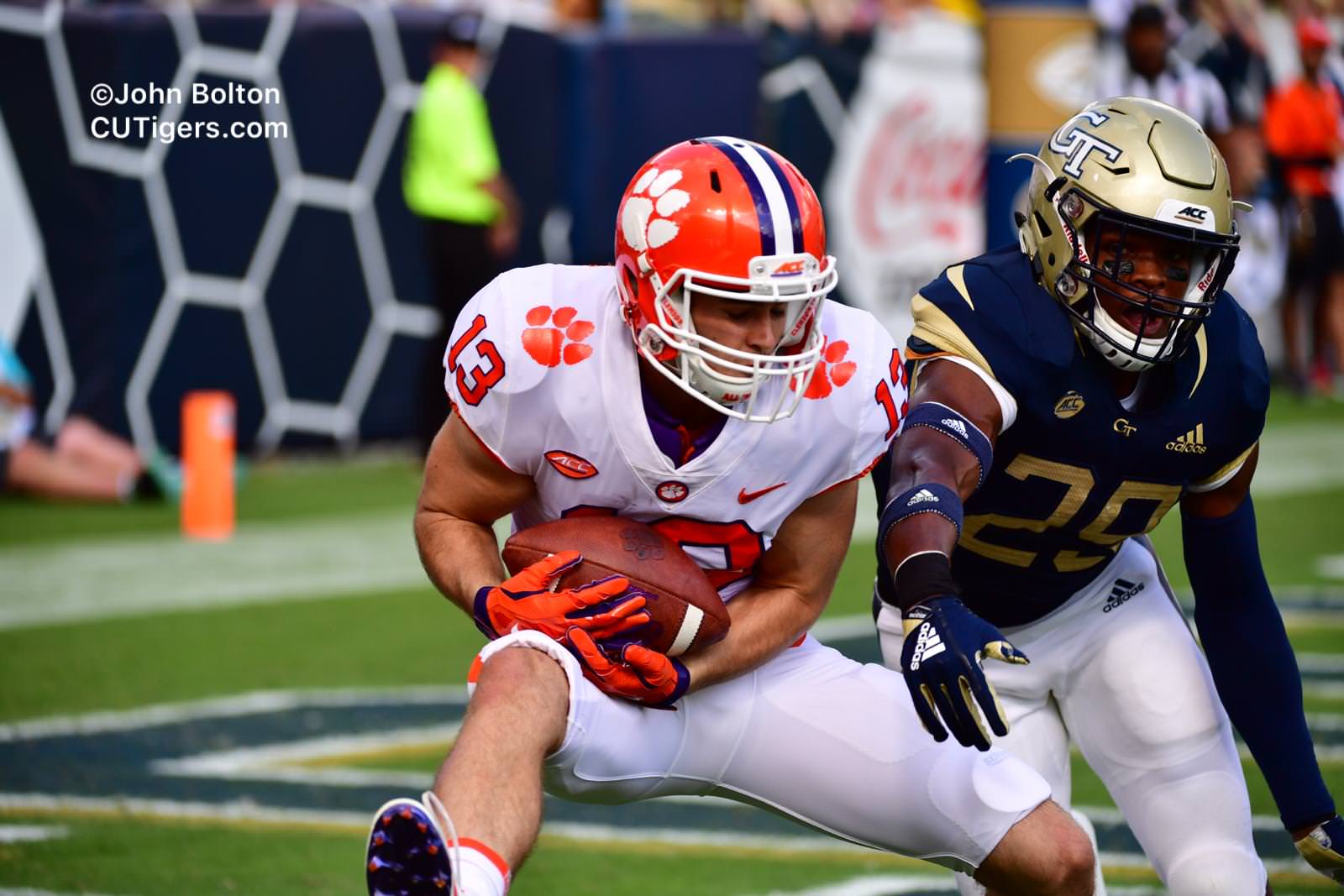 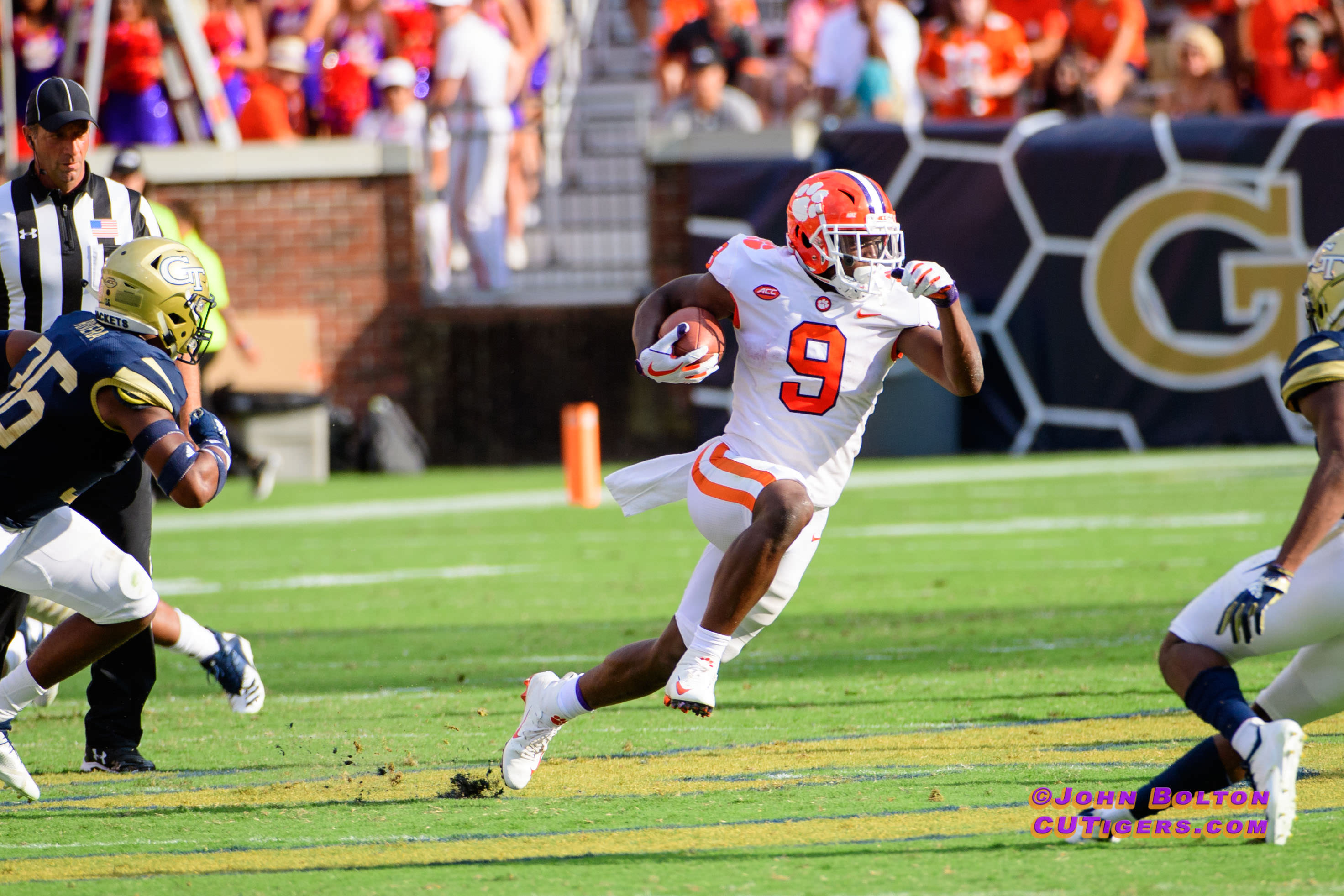 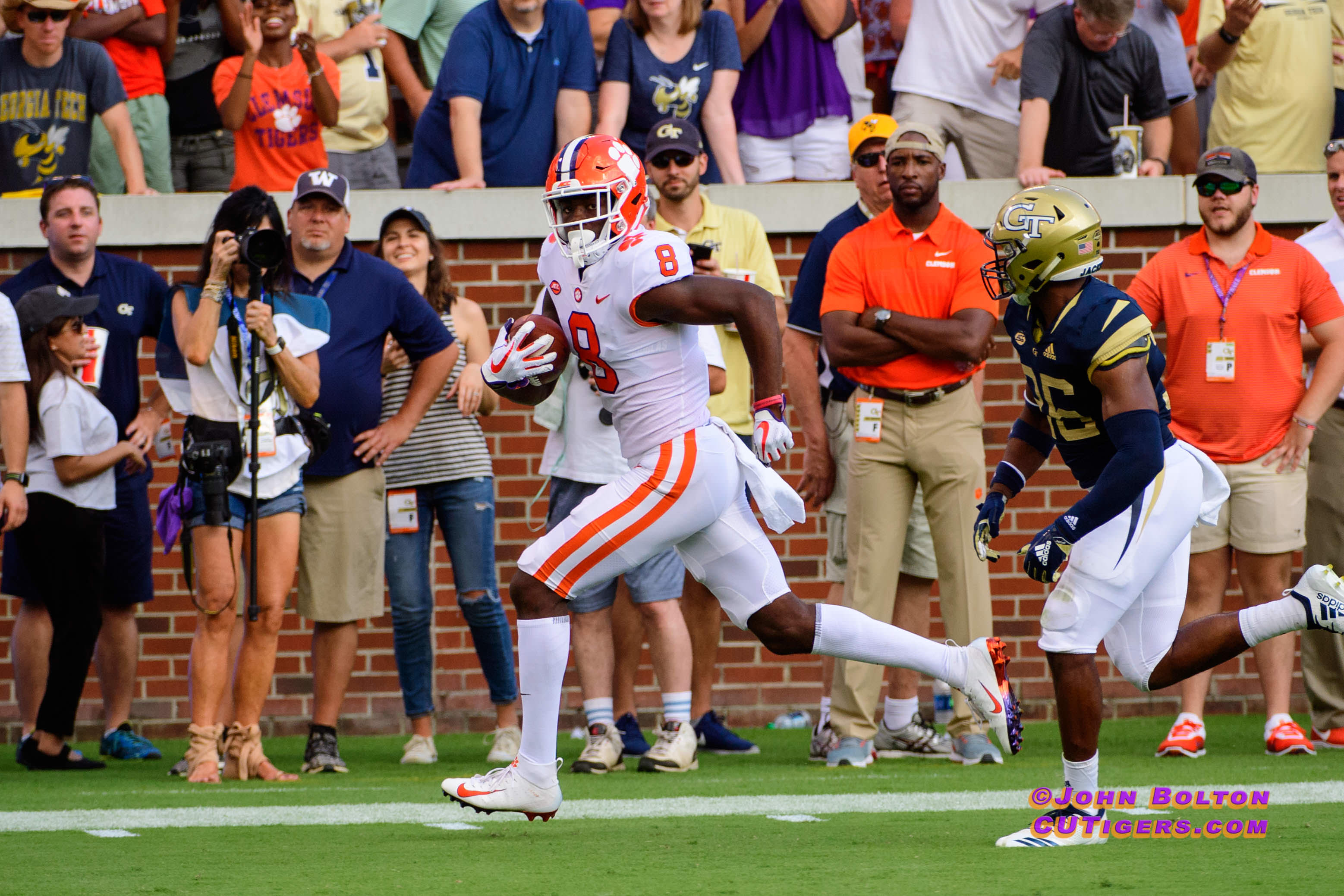 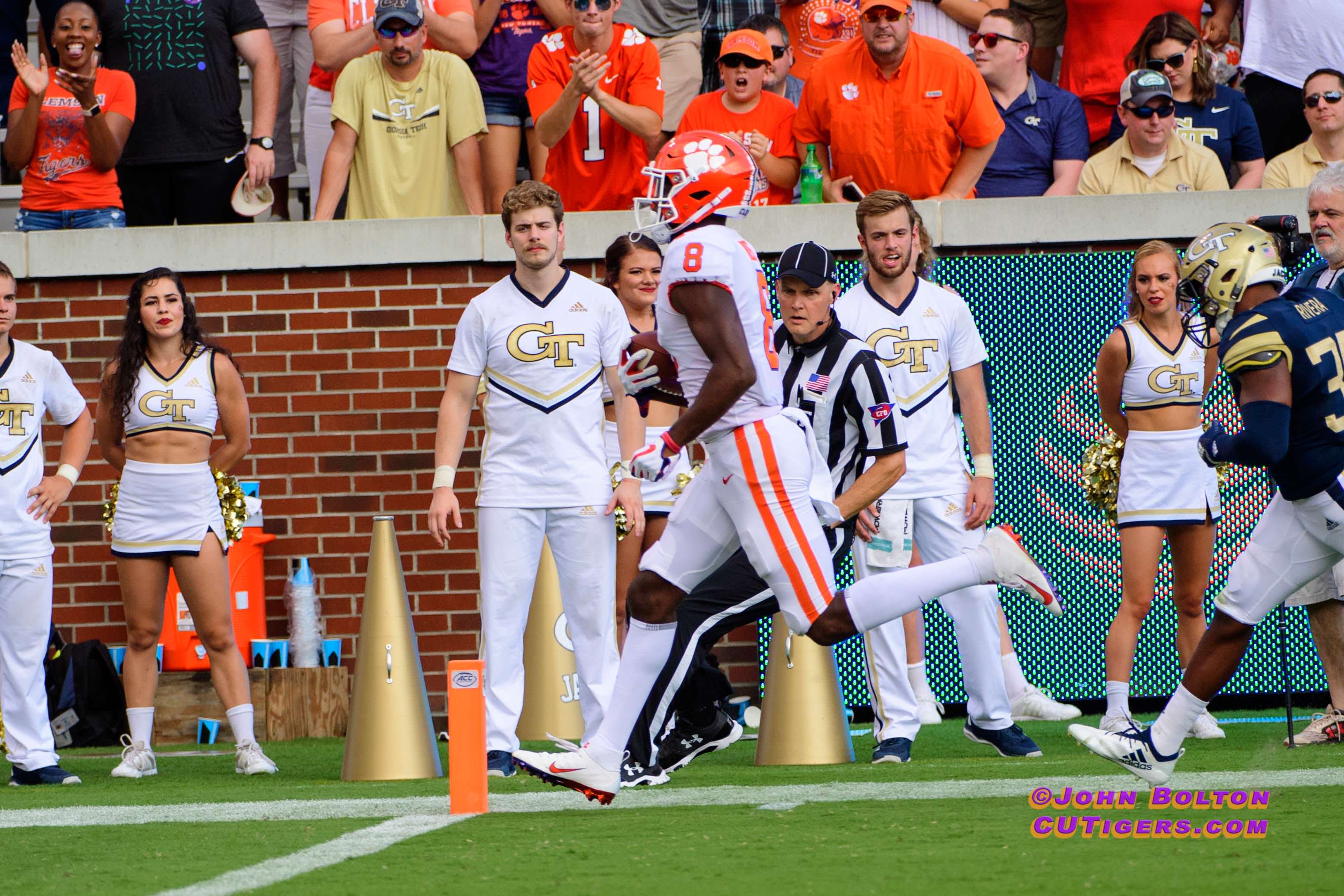 Etienne rushed for 122 yards and a touchdown on just 11 carries, averaging 11.1 yards per carry. It was his second straight game rushing for over 100 yards. He also caught a shovel pass from Lawrence for another touchdown, so Etienne has scored 2 TD"s in each of the last 2 games. Freshman phenom Justyn Ross is proving to be the most dangerous big-play WR in the nation, recording his team-leading 3rd touchdown catch of the season. With just 6 catches this season, Ross is averaging a touchdown every 2 catches and 28.7 yards per catch! 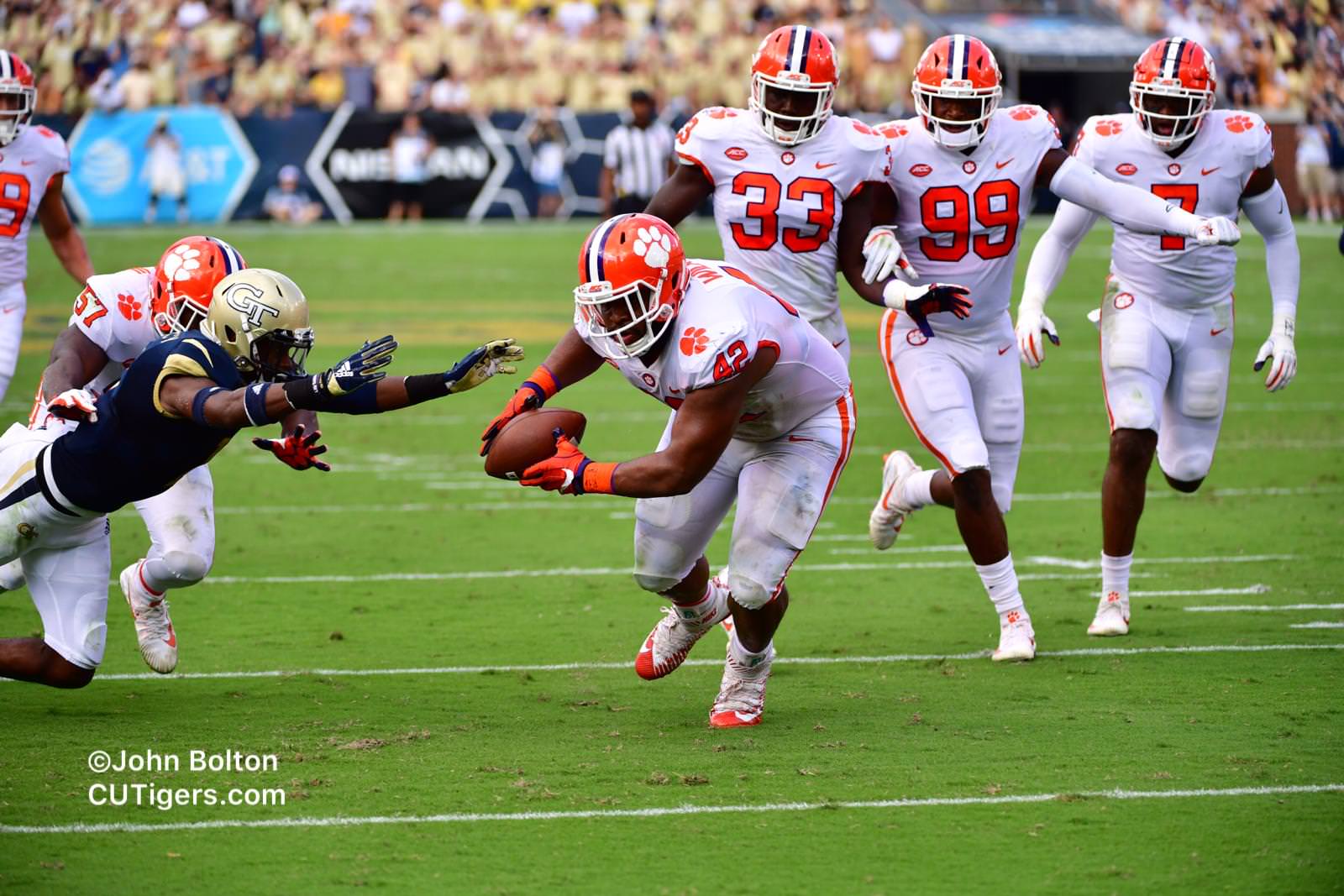 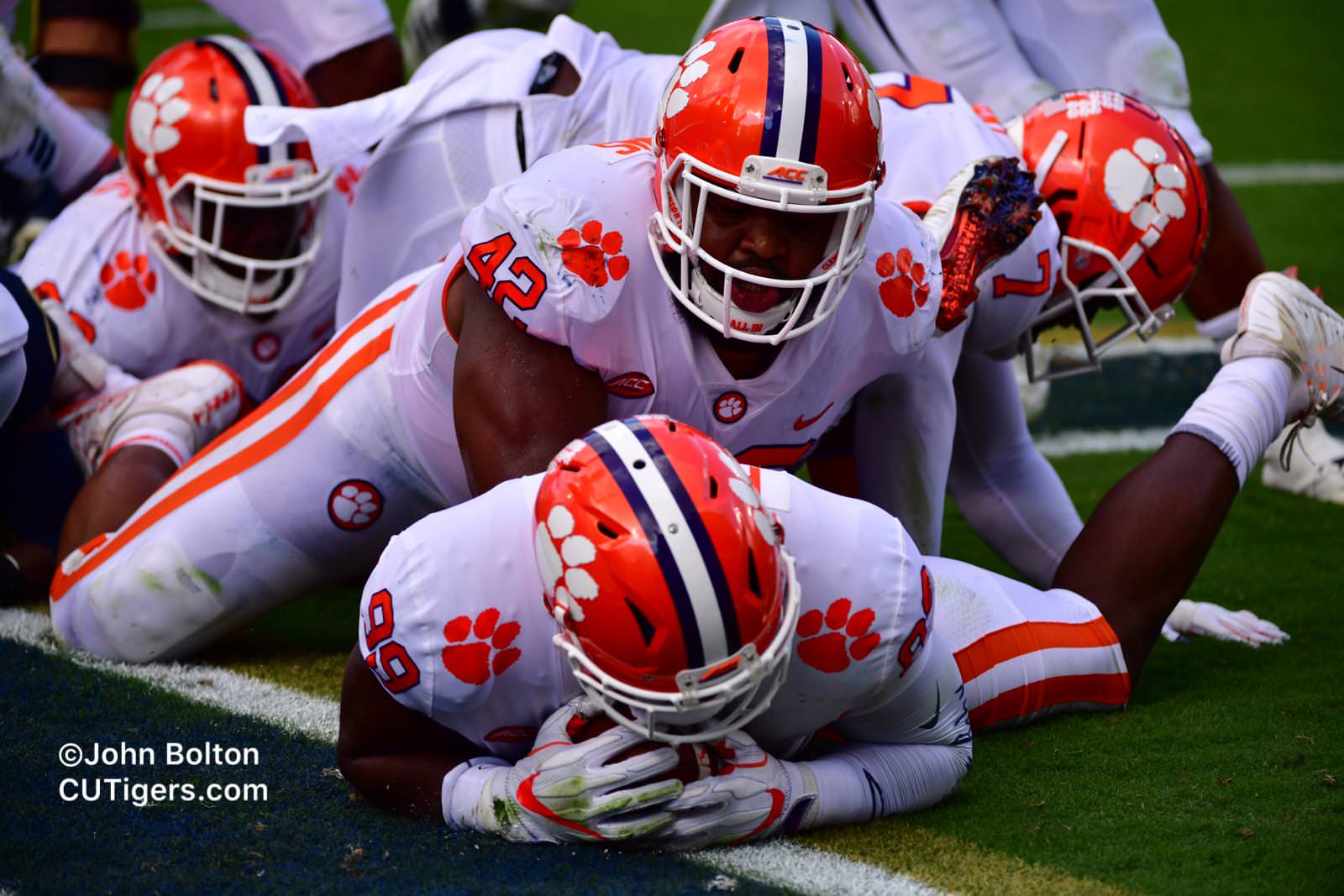 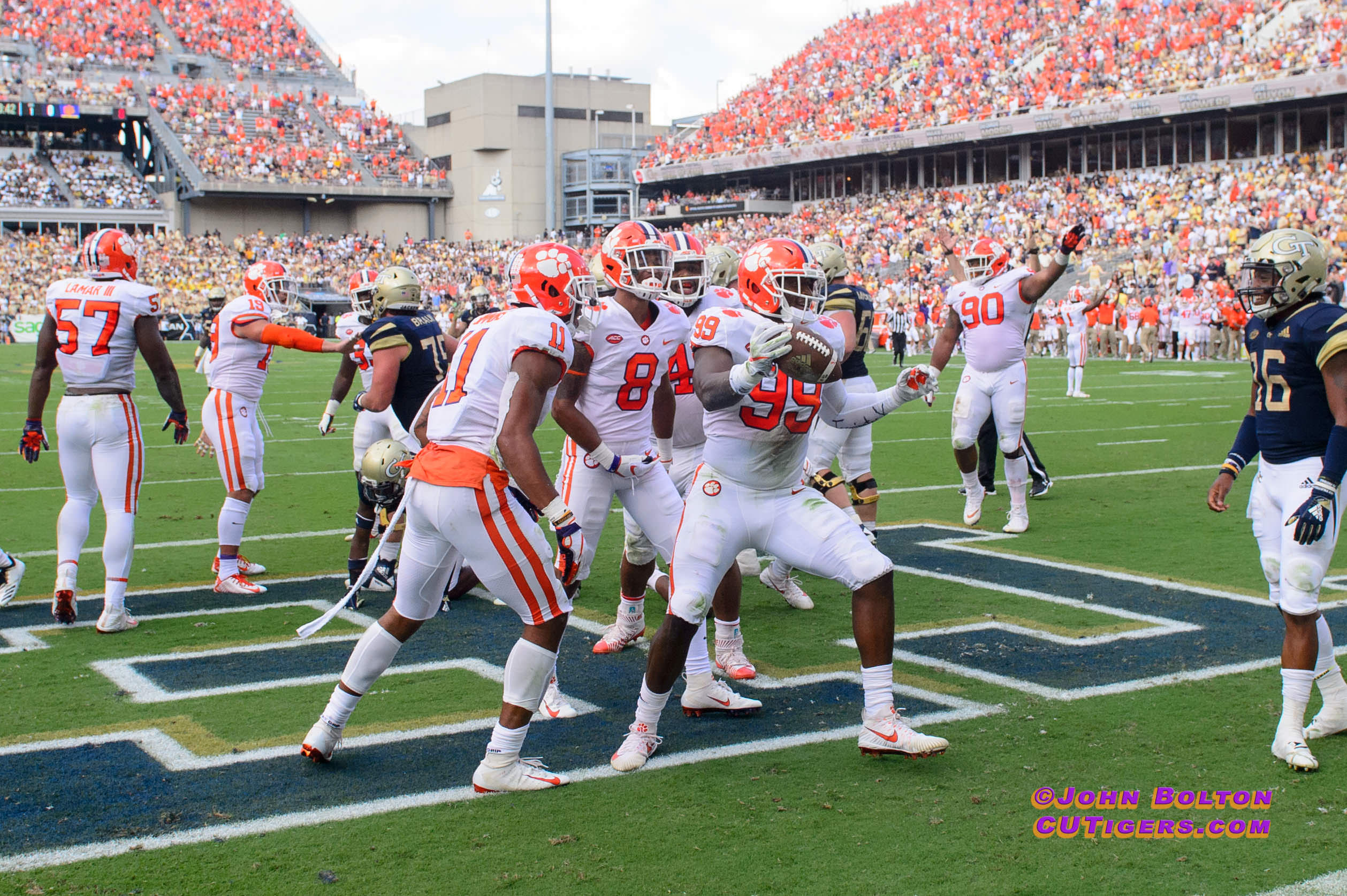 Venables proved to be Paul Johnson's kryptonite once again, holding Tech to just 203 total yards. His defenses had allowed an average of 209 total yards per game for the last 4 years, so now it's 208 yards per game in the last 5 meetings! And that was without starting linebacker Kendall Joseph, who injured his groin in practice on Wednesday. Dabo said after the game that they had hoped Joseph might be able to play today, and there's a good chance he'll be back against Syracuse next week. JD Davis got the start in Joseph's stead and really rose to the occasion, coming up with a big sack in the first half and "assisting," if you will, Clelin Ferrell's touchdown on the fumble recovery for the Tigers' first score. His twin brother Judah also got substantial playing time, as did Chad Smith and Shaq Smith at the linebacker position. They also put Skalski into the game for the first time this season, which surprised me because I thought they would save his 4 games for the end of the season. It sounds like they still intend to red shirt Skalski, so I find it curious that they would play him this early in a blowout game as opposed to waiting until the end of the season when they might need him more. I'll get some clarification from Dabo when we talk to him Sunday evening. Many others got into the game on the defensive side, such as Huggins, Pinckney, Foster, Xavier Thomas, Logan Rudolph, Nolan Smith and Denzel Johnson, and they saw meaningful playing time early when the game was still relatively close. The defense created a turnover for the 12th straight game.
Dabo said it was the best game they've played this season, and it was a big statement win for the Tigers, serving notice to the rest of the ACC that they do not plan to abdicate their throne anytime soon. For the seniors, it was their 4th straight ACC road opener win, and they've also beaten Tech 4 straight years--something that's only been done 3 times in the history of Clemson Football! After losing to Tech in Atlanta 5 straight times, the Tigers have now won there twice in a row, and the scary thing is they could have easily won this one by more than 28 points! The Tigers brought in the reserves early in the second half, and that kept the game closer than it would have been. Dabo decided he wanted the team to finish on a positive note, so he brought Trevor Lawrence and the starting offense back out at the end of the game, and they almost effortlessly found the end zone again with a Tee Higgins touchdown. 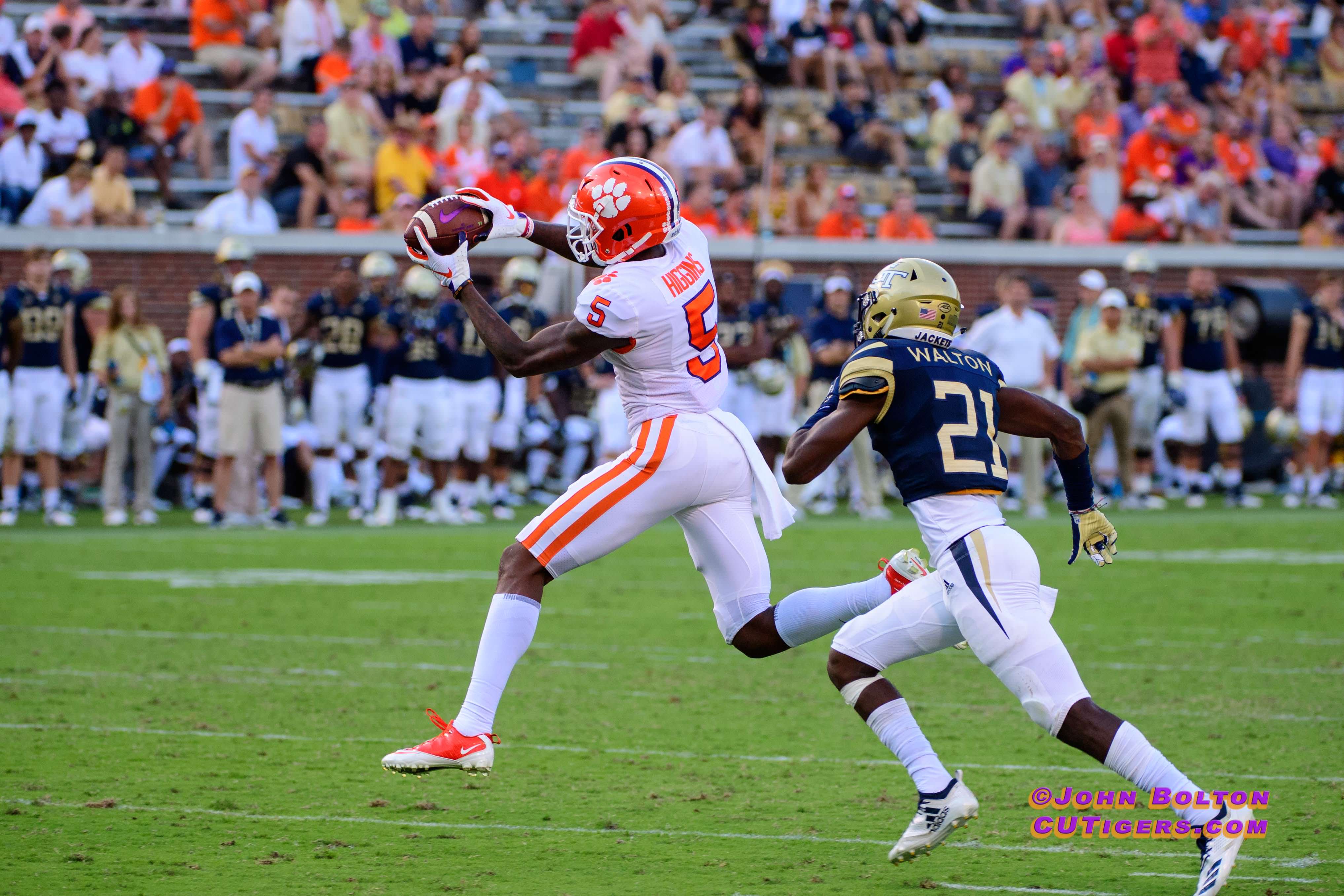 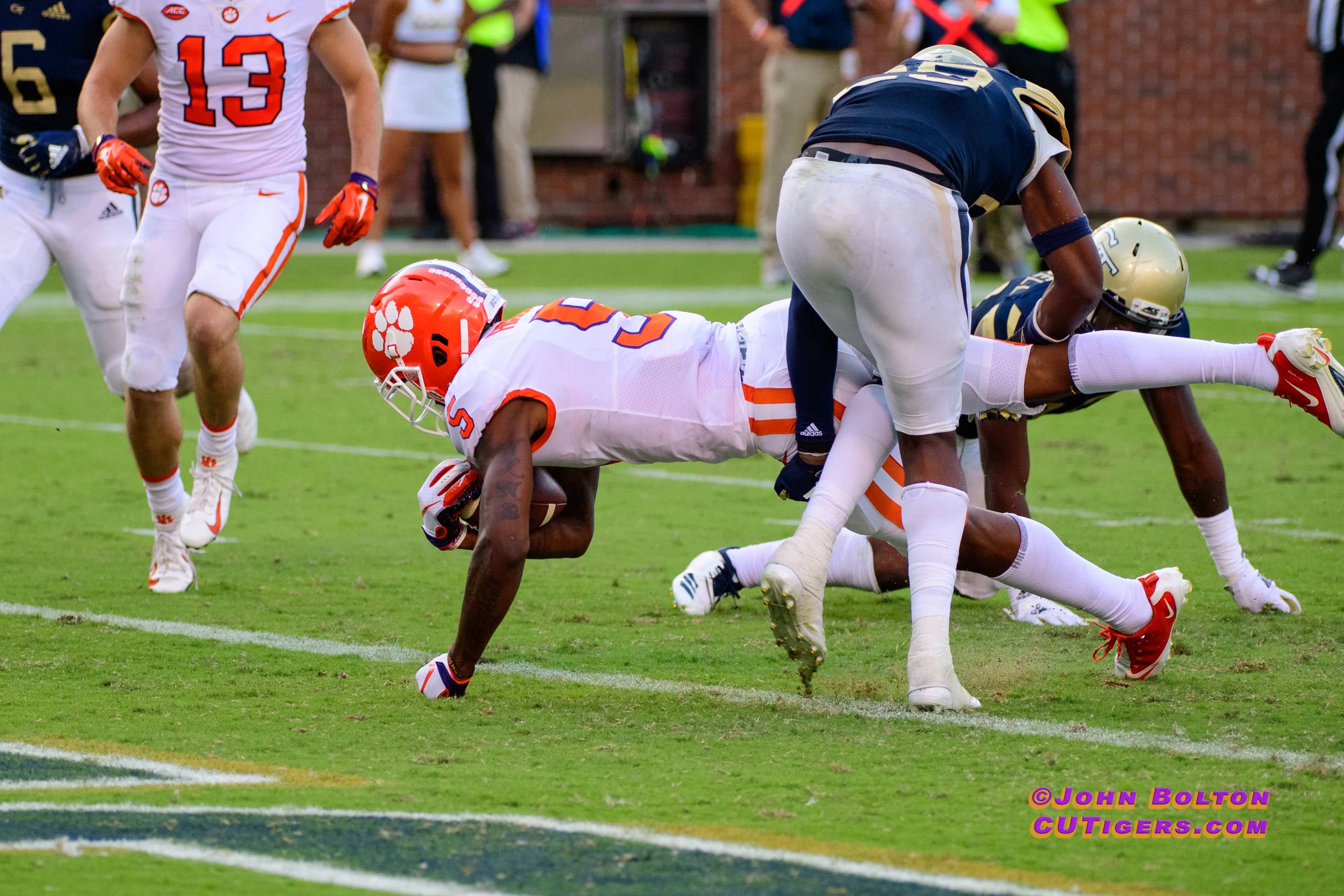 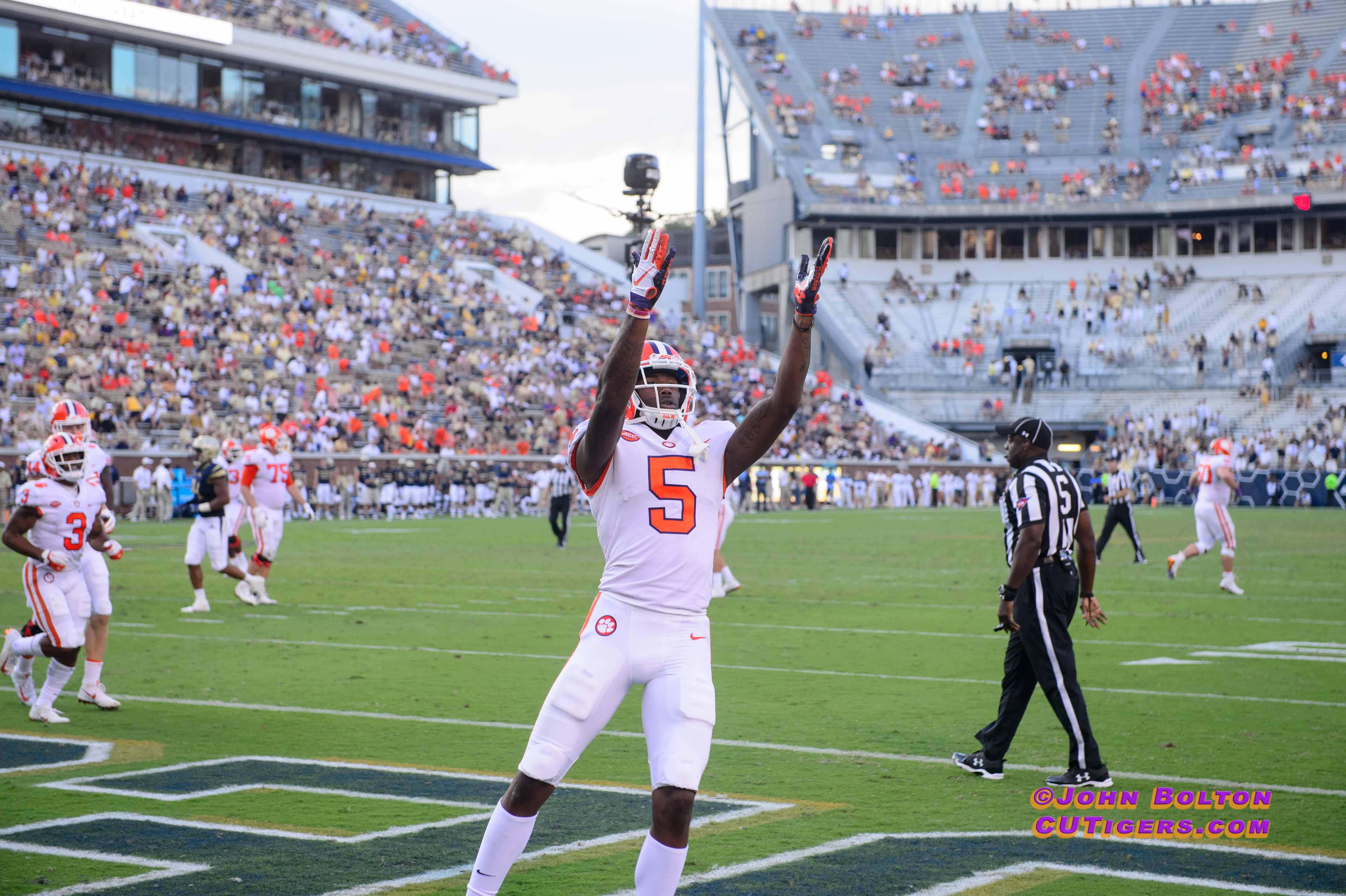 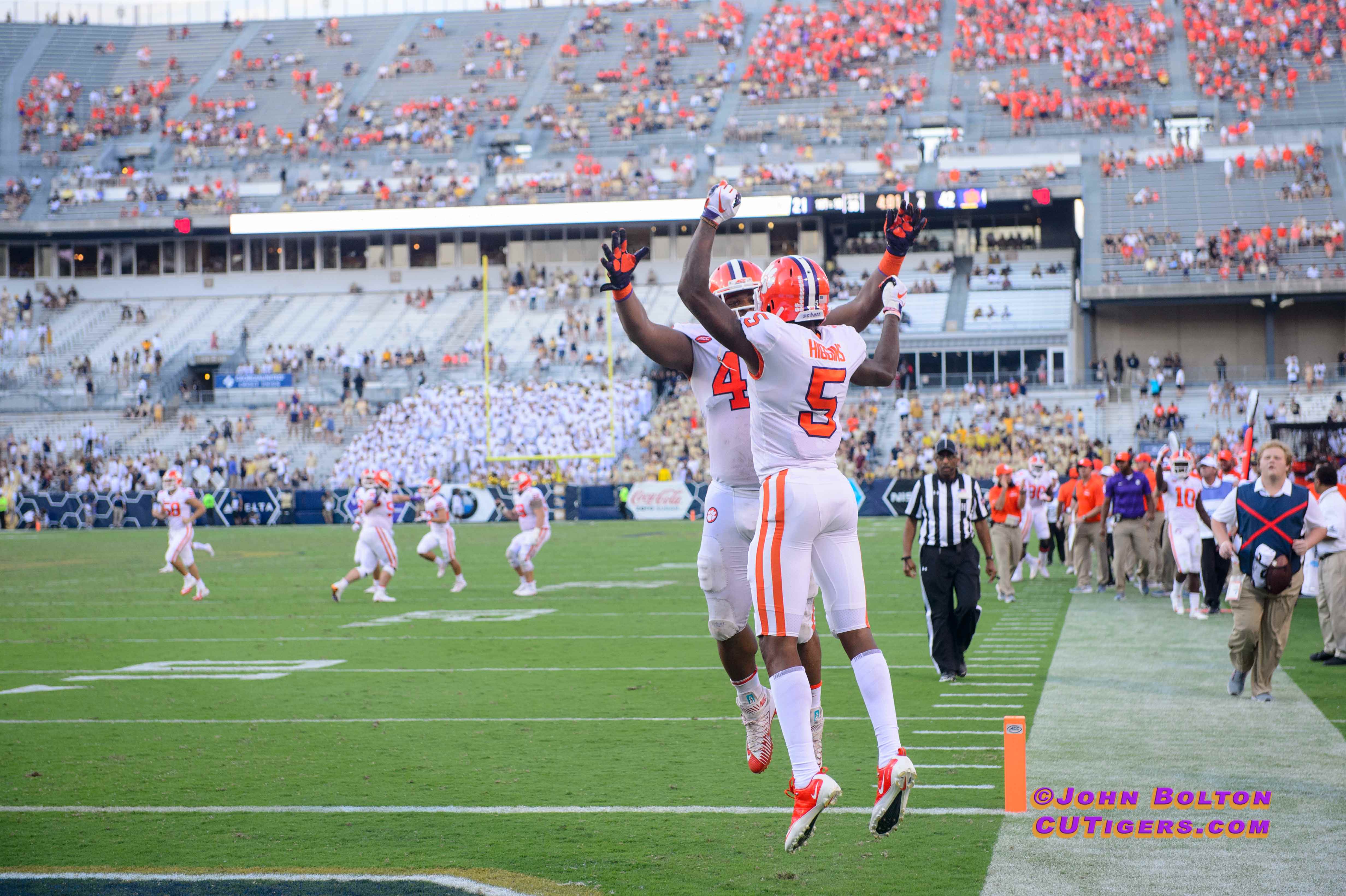 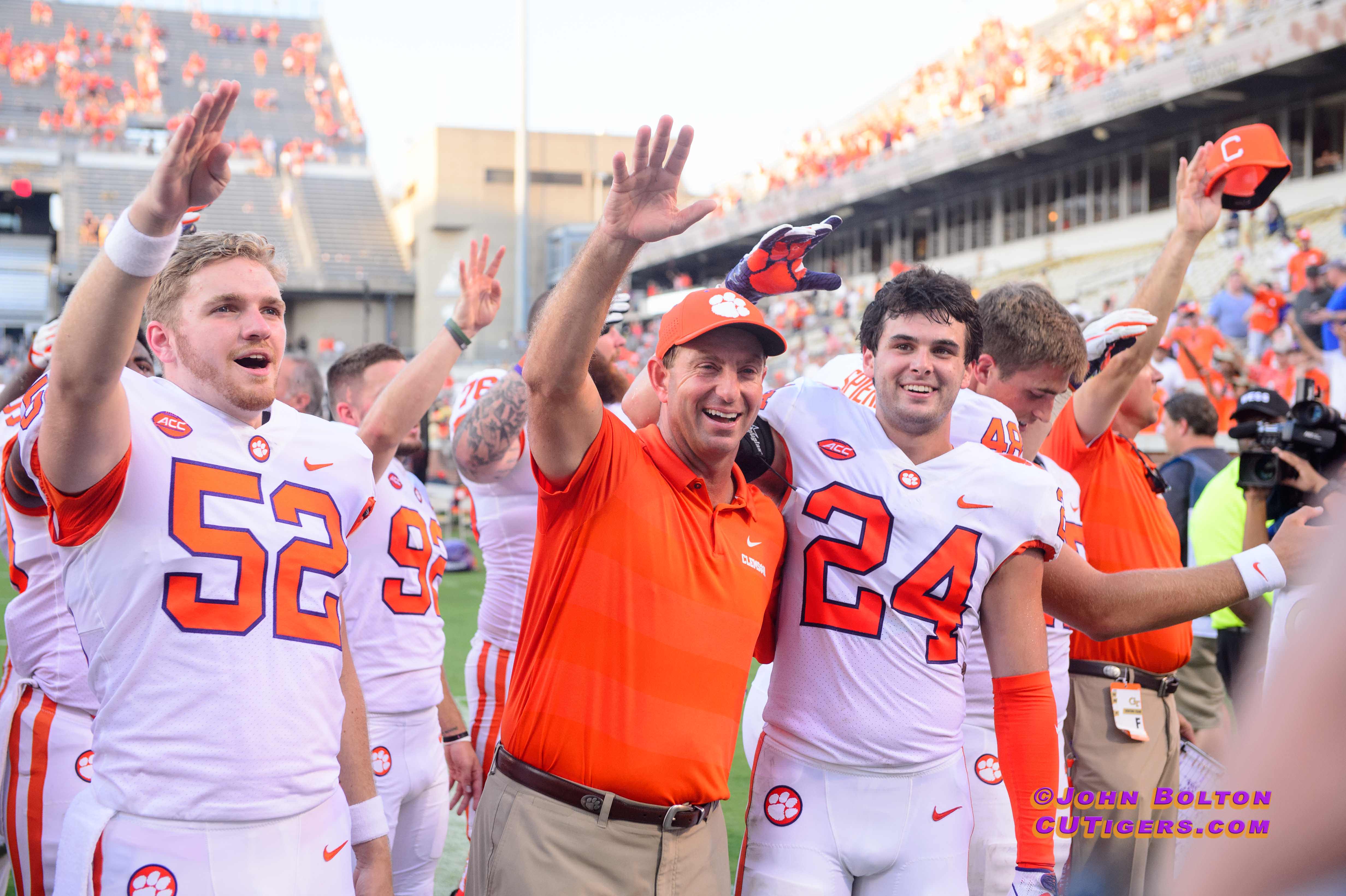 Next up for the Tigers is 4-0 in Syracuse at noon in Death Valley. I'll have a photo gallery tomorrow and our Sunday evening teleconference with Dabo, so stay tuned!
POST-GAME INTERVIEWS HERE