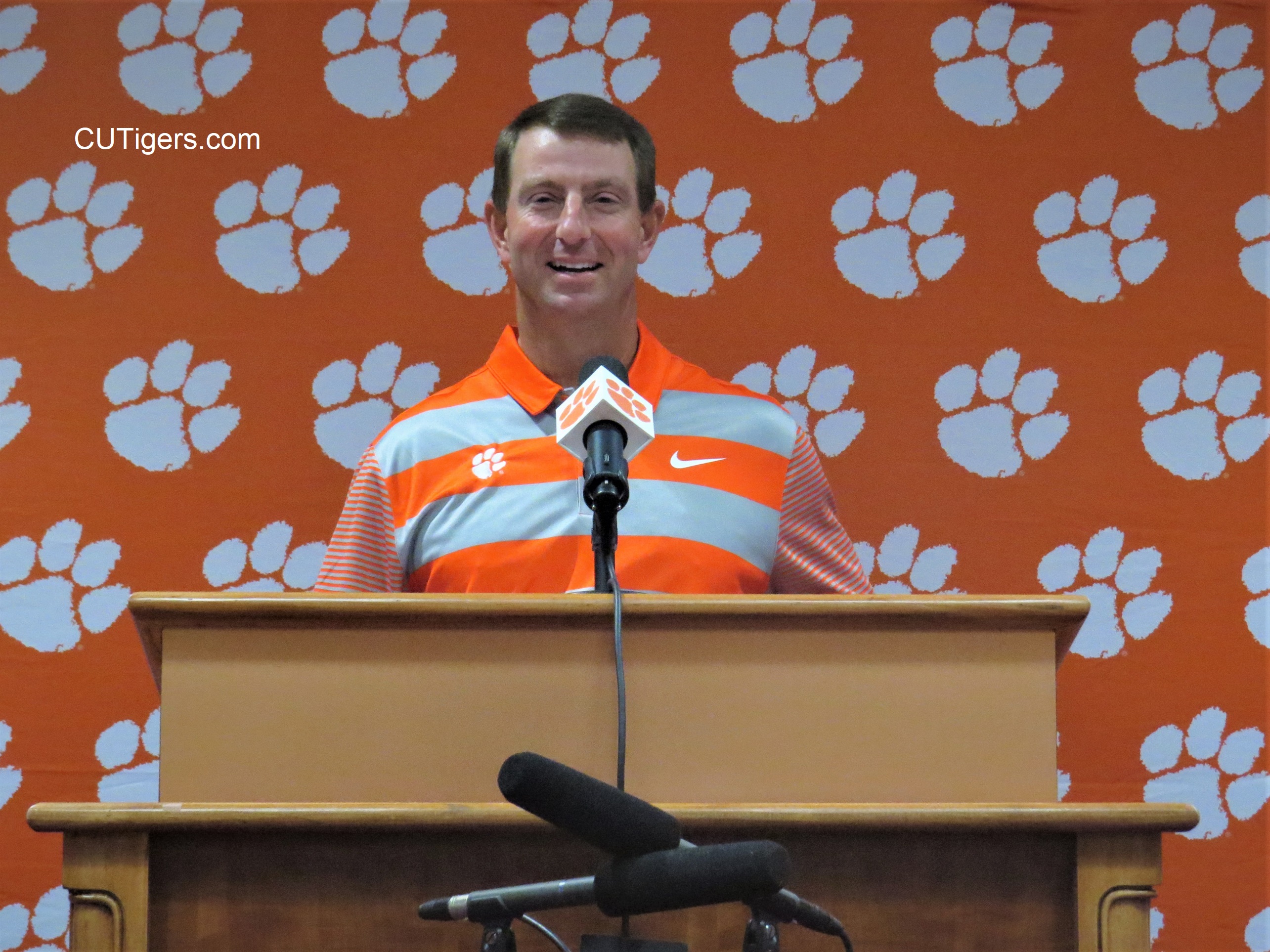 As we opened Dabo's weekly Tuesday press conference this morning, obviously the big thing on everyone's mind was Monday's announcement that Trevor Lawrence would get his first career start on Saturday against Syracuse. I asked Dabo if we could expect to see both quarterbacks, like they've been doing the first 4 games, and he confirmed that will be the case. Dabo emphasized that Kelly has not played badly, but the data and productivity clearly have shown that Trevor deserves to run out there first. It's not beyond the realm of possibility that we could see Kelly start again later in the season if Trevor has a bad game. I don't expect that to happen, but I won't be shocked if it does. After all, Trevor is still a freshman, though it's hard to remember that if you watched him play in Atlanta on Saturday.
When asked about the conversation with Kelly on Monday, Dabo said, "It was a bad day to be a head coach. I love Kelly." Dabo was also asked if Kelly gave any indication that he might want to transfer, and Dabo said he did not. Kelly is such a competitor and team player that I expect him to continue battling, knowing that there is a very good chance he will be called upon again to lead this team.
The question was asked whether this move at quarterback was motivated with winning the national title in mind. "Winning the national title is not our goal. Winning the division and beating Syracuse are our goals. But I'll say this: we can win the national title with either of these quarterbacks," Dabo said.
Dabo explained why he decided not to make either quarterback available to the media this week, and it was about what I guessed yesterday. "Just wanted to give these guys a break," he said.
I also asked Dabo for clarification on Jamie Skalski since they put him into the game in the first half against Tech. He confirmed that it was just because they were without Kendall Joseph and they thought they would need Skalski to win the game. I asked him if they'd prefer to save Skalski's remaining 3 games until the end of the season to meet the red shirt rule, and Dabo said that is what they're hoping for, but it's just a week-to-week situation right now.
Speaking of Kendall Joseph, Dabo is hoping to get him back this week. Jordan Williams will also be practicing this week. Dabo told us Noah DeHond has a shoulder injury he's been dealing with and might end up red shirting.
The only player made available to us today was Tanner Muse, who has curiously scored a touchdown in each of the last two meetings with Syracuse. He had a pick-six of over 50 yards in Death Valley two years ago and also returned a fumble over 50 yards last year in the Carrier Dome. Muse talked about the challenges Syracuse's offense presents, but I also get the impression he is looking forward to Cuse's style of offense after having to face option teams in 3 of the first 4 games. He will surely have a lot more passes to defend and interception opportunities in this game!
You can watch all of Dabo's press conference and our interview with Tanner Muse below. Don't forget, we'll get Dabo again Wednesday evening after practice, and be sure to check back on Friday morning for the What We Are Hearing!