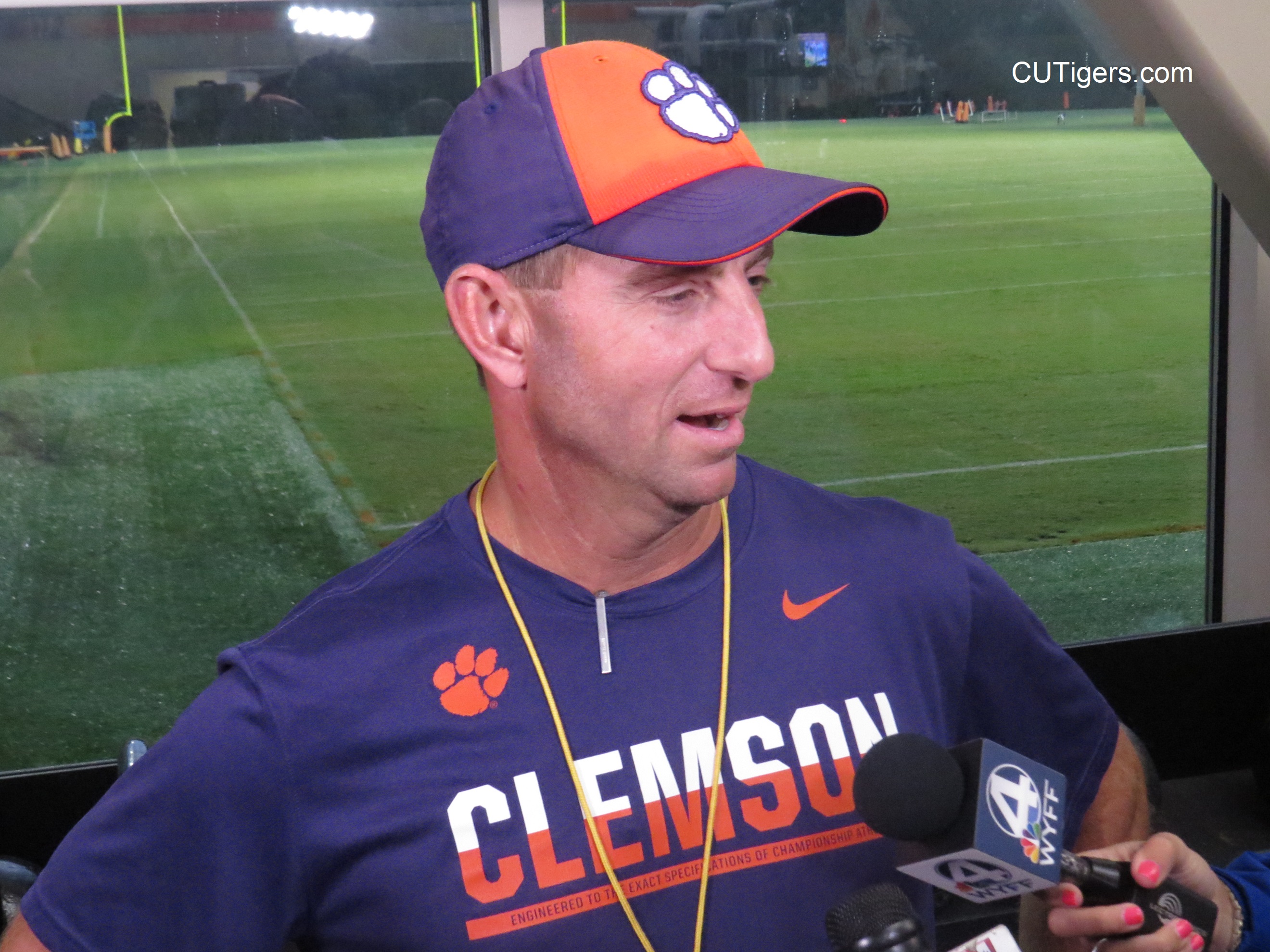 We just wrapped up our weekly talk with Dabo, and it was the biggest crowd I've ever seen for a Wednesday Dabo interview by a factor of 5! Usually it's just myself and 3-5 others, but the Kelly Bryant bombshell brought a bevy of media, including a reporter from ESPN.
Dabo went over the minutia of the Kelly Bryant saga once again for the second time today. I asked him about Ben Batson--how fortunate he feels that Ben decided to come to Clemson without a scholarship and how far he's come physically. Dabo nodded with a big grin and reminded us that they had intended to play Batson at safety until Hunter Johnson decided to transfer. It's amazing what a difference a few months can make. Less than a year ago, the Tigers had more 4 and 5-star quarterbacks than they knew what to do with. 4 QB's have left since then, and they are down to Lawrence, Brice, a former walk-on who was going to play safety, and now the fourth-string quarterback--believe it or not--is Hunter Renfrow! He is also the third-string punter, incidentally. Renfrow was a veer offense QB at his high school in Myrtle Beach, and you may recall he attempted a pass at A&M a few weeks ago. The Tigers are still in better shape--though not by much--than Randy Edsall and Maryland a few years ago, when they were reduced to converting a linebacker to quarterback, or "quarterbacker," as I called him. Batson has had a finger injury the last couple weeks, so he's not even 100%. One would hope Trevor Lawrence will only run if necessary, that he will learn to slide feet first and that the offensive line will protect him like they would their own mothers. Ben Batson is a sprained ankle and a concussion away from being the starter and Renfrow the backup. Brice is a very capable backup and could lead the Tigers to another ACC title if called upon, but I'm not sure he could take them all the way to another national title. Let's hope Trevor stays healthy, and we don't have to find that out!
I also asked Dabo if losing Kelly simplifies things at all for Coach Streeter and him, just from the standpoint of preparing one quarterback as opposed to two. Dabo basically reiterated that he just wished he still had two, but I would think that the extra time and attention Trevor will now receive has to be a positive. It can only expedite his development and grasp of the offense.
You can watch our full interview with Dabo below. Don't forget to check back Friday morning for my weekly game preview and prediction, What We Are Hearing!