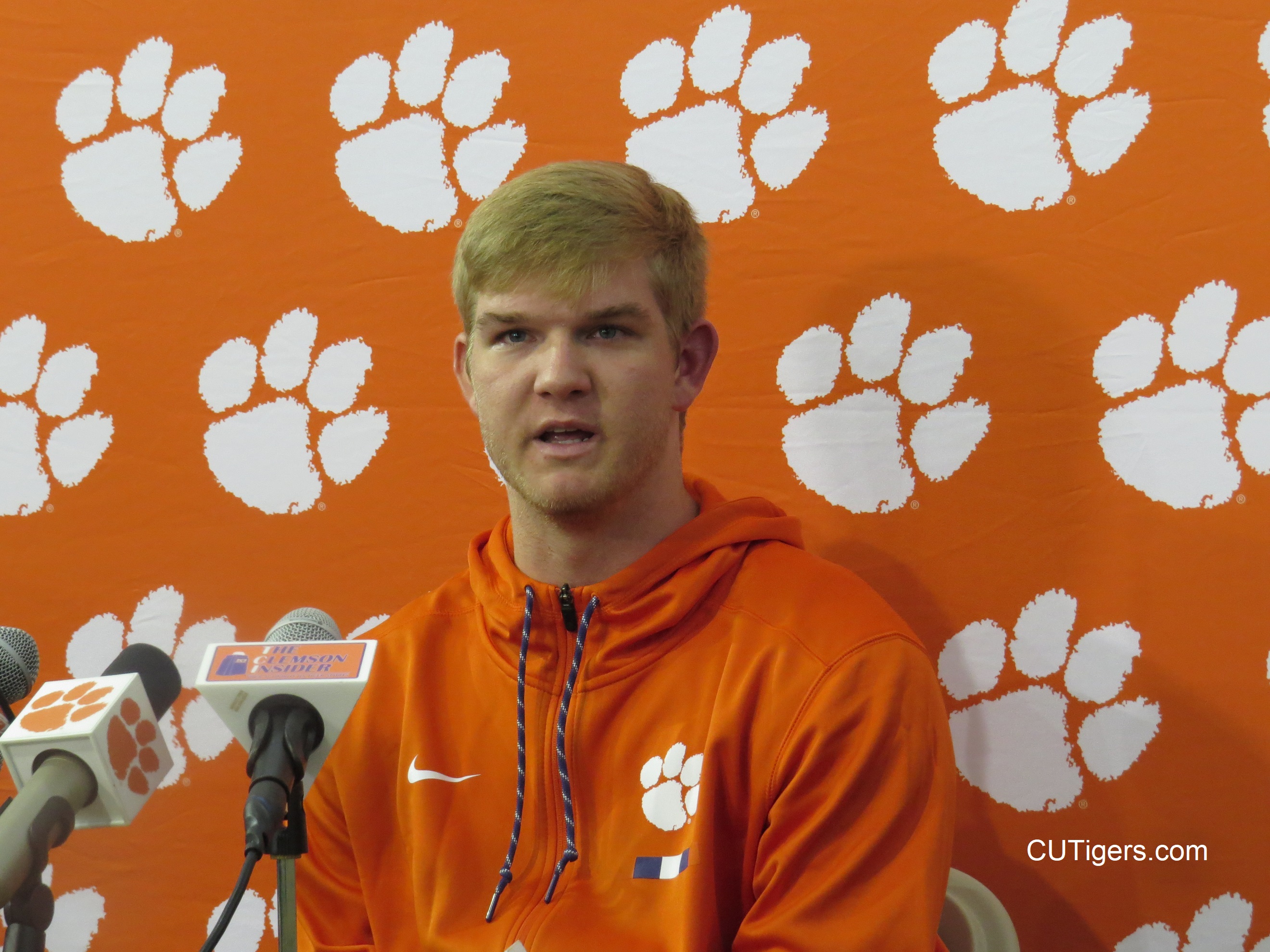 Jeff Scott told us this morning that they are hopeful Trevor will be able to practice as early as tonight, so the prognosis for him to start at Wake Forest on Saturday looks very good, but it will be a day-to-day situation. Scott talked about his emotions on the sideline on Saturday, and I asked him about the struggles Amari Rodgers had with his punts on Saturday. Amari has been solid all season, but he had 2 drops on Saturday, plus another one that he had to dive to catch. That Syracuse punter kicked the ball a mile high with a long hangtime, and Amari was clearly having issues fielding them. The coaches turned to the sure-handed and reliable Hunter Renfrow after Amari's last drop on the 10-yard line cost the Tigers 7 points. Thank goodness it didn't cost them the game! Scott said he talked about it with Amari and feels that he will bounce back from it. He is much more of a threat than Renfrow in the punt return game, so let's hope he's able to put Saturday behind him.
I asked Venables about the virtues of playing another warp-speed offense after facing a very similar tempo in Syracuse. The Orange was #4 in the nation last week in plays per game, and Wake is currently #2! Venables agreed that it will be good to have that familiarity, and that it should carry over from last week. However, he pointed out that Wake doesn't substitute as often as Cuse, which means he won't have as many opportunities to rotate players in and out on defense. That can make fatigue even more of an issue late in the game if the Tigers aren't able to get some three-and-outs early. I also asked Venables whether he feels more comfortable with his situation at corner now that he's seen Kyler McMichael respond in a big game. Trayvon Mullen missed a scrimmage back in August because he was at a funeral or some other personal matter, and Venables talked about how losing just one corner can make a big difference because they were so thin there. Well on Saturday, not only did Mullen leave the game with a rolled ankle, but they were minus Mark Fields for a one-game suspension. However, McMichael held his own, and I think Venables feels much more comfortable with their depth at corner than he did about 6 weeks ago.
We also had a nice interview with Chase Brice, and he took us through his range of emotions on Saturday, including some of the big plays he made at the end of the game. I asked him if he made the coaches nervous at all on that first down run when he refused to go down and was fighting for extra yards. He chuckled and said probably so. By the way, Wilkins also mentioned that run and joked that Brice is the slowest quarterback Clemson has ever had. You could tell that Wilkins had a lot of affection and respect for Brice. In fact, he said everyone on the team loves Chase. Wilkins said they would lovingly talk trash to each other last year when Chase was on the scout team and Wilkins was trying to sack him.
Speaking of Wilkins, Dabo told us the other night that he took Trevor Lawrence out to breakfast last week as a show of support from one of the biggest leaders on the team. I asked Christian to describe how that all transpired and what Trevor's reaction was. He said that it was just kind of a spontaneous idea he had as a team leader and joked that he got a date with a cute blonde out of it. Wilkins also reiterated what Venables said in response to my question about Wake's tempo on offense. Christian thinks that the warm-up of sorts against Syracuse's tempo will definitely serve them well this week.
Finally, we spoke to center/guard Gage Cervenka for the first time in this setting, and he was a nice interview. He spoke about making the change from defense over to offense and waiting for his opportunity. He sure made the most of it on Saturday. He had a great game outside of the one false start penalty and was instrumental in that final game-winning drive. Gage said that he's been playing a lot more guard lately, and he talked about how playing on the defensive line as well as his high school wrestling career helps him be a more effective offensive lineman.
You can watch all the interviews in full below. Don't forget to check back tomorrow for Dabo's 11:00 press conference, Trevor Lawrence update and more player interviews!