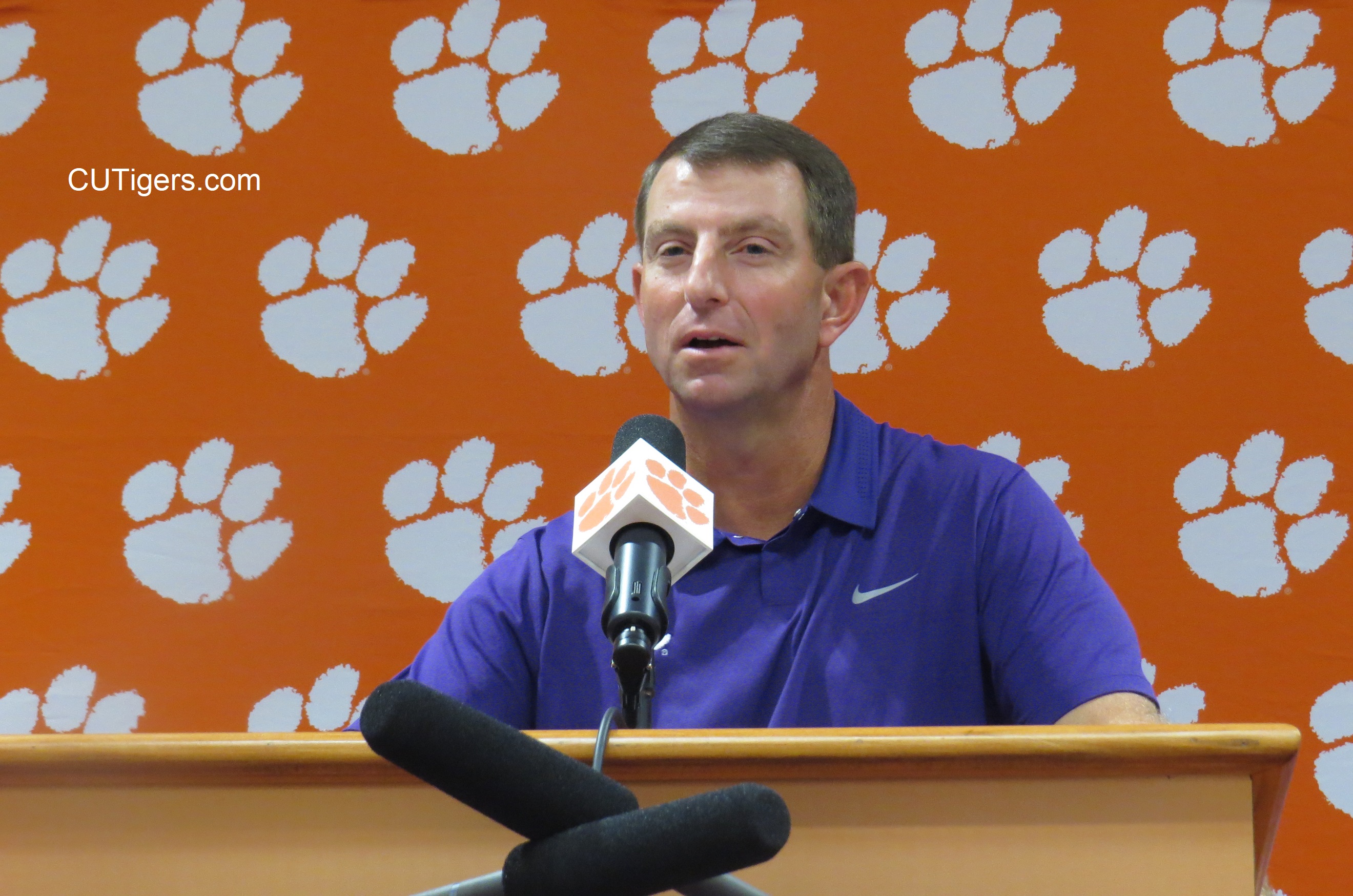 In his weekly Tuesday press conference, Dabo reiterated what a big step forward Saturday was for his team, making the analogy to charting his kids' growth on the wall as they were growing up. Dabo told me that Trevor Lawrence did everything in practice that he would normally do last night, and he also said that he fully expects Trevor to play on Saturday. Renfrow told us later that he thought Trevor looked great in practice. Dabo also talked a little about the "Indy," or speed package they ran out there for the first time on defense, with defensive ends Ferrell, Bryant and Xavier Thomas all on the defensive line at the same time with Christian Wilkins. Dabo said they hadn't really had a chance to run the package yet because of the option teams they played early, but we can expect to see more of it as the season goes on, and that is a frightening prospect for ACC defenses. The team is in good shape from a health standpoint. Dabo said he thinks Mullen and Anchrum, who both rolled their ankles last week, will be able to play on Saturday. I wouldn't be surprised if they hold Mullen just to be on the safe side. It would be much better to give him the next two weeks with the bye to heal his ankle completely if they can win without him. Mark Fields missed the Cuse game due to a violation of team rules, and they get him back this week. Also, McMichael proved that he was equal to the task when his number was called on Saturday. So it will be interesting to see if they decide to hold Mullen or play him sparingly.
Kendall Joseph was out on the field when they ran that package, and he got an ear-to-ear smile on his face when he was asked about it, saying "That was a beautiful thing, wasn't it?" I asked Kendall about facing that warp-speed Wake Forest offense, which is #2 in the nation in number of plays run per game behind only Texas Tech. He said since they substitute personnel even less than Syracuse does, it will be critical for them to create some three-and-outs early so they will still have fresh legs in the 4th quarter. He said getting lined up is toughest challenge against Wake's offense because they are snapping the ball so fast. I also asked Kendall if he was 100% on Saturday and how hard it was for him to sit out that Georgia Tech game. He said it was really hard for him to miss that game, and that he had butterflies waking up that morning. He said he definitely felt back to 100% on Saturday, and he was extremely proud of fellow linebacker J.D. Davis and the way he played that day, starting in Kendall's place. In fact, Kendall said that J.D. really pushes him to be better in order to keep his starting spot.
We also had a nice interview with Hunter Renfrow, who talked about what it's been like knowing he was the third-string quarterback on Saturday. In case you missed it, Jeff Scott told us yesterday that when they asked him if he was ready to play quarterback, he thought they were saying "cornerback," and he discussed some defensive techniques he would use until they cut him off and explained they said "quarterback." Hunter Renfrow is indeed a jack of all trades--he is even currently the third-string punter on the team! I asked Renfrow to take us through the acrobatic catch he made on that 3rd and 8, which really sparked the whole stadium, gave Chase Brice some much-needed confidence after his receivers dropped a couple balls and gave the Tigers their first points of the second half. Renfrow also talked about the whole Kelly Bryant saga that unfolded last week and his personal thoughts on the whole situation. Finally, Renfrow mentioned the upcoming bye week after the Wake game and how the team is really focused on sprinting through the finish line, as opposed to last year when they lost at Syracuse the week before the bye.
You can watch the full videos below. We'll have our regular Wednesday evening interview with Dabo after practice tomorrow, and don't forget to check back on Friday morning for the What We Are Hearing!