No.4 CLEMSON SETS RECORD, OBLITERATES WAKE FOREST 63-3 ON THE ROAD

WINSTON-SALEM, NC – The No.4 Tigers were indominable today in their 63-3 road rout of Wake Forest in front of what had to be an Orange-heavy crowd. The Clemson crowd outnumbered the home-standing Deacs to the extent that at one point a Wake Forest offensive lineman was gesturing for the crowd to be silent, not realizing it was the Clemson fans making all the noise. 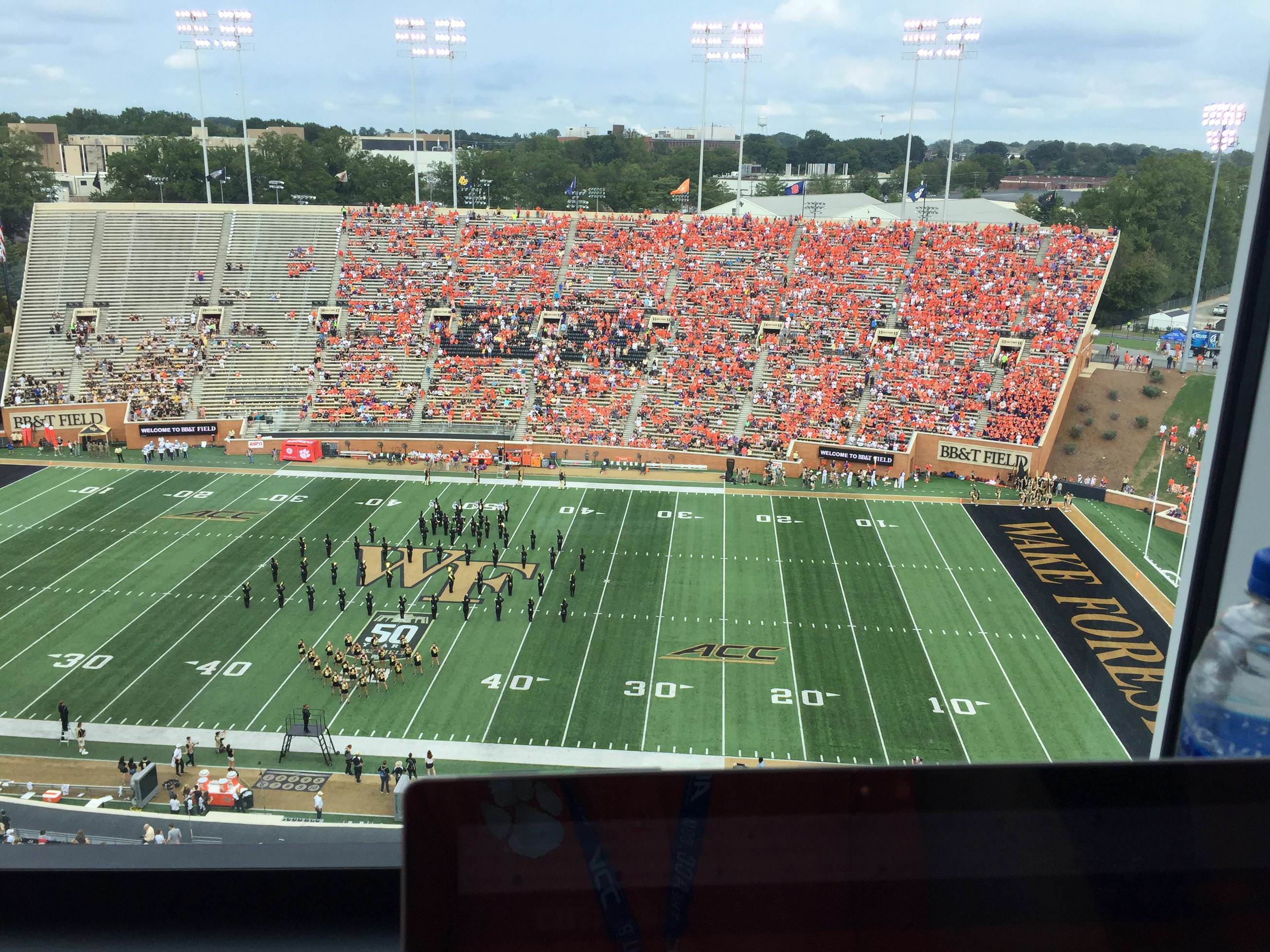 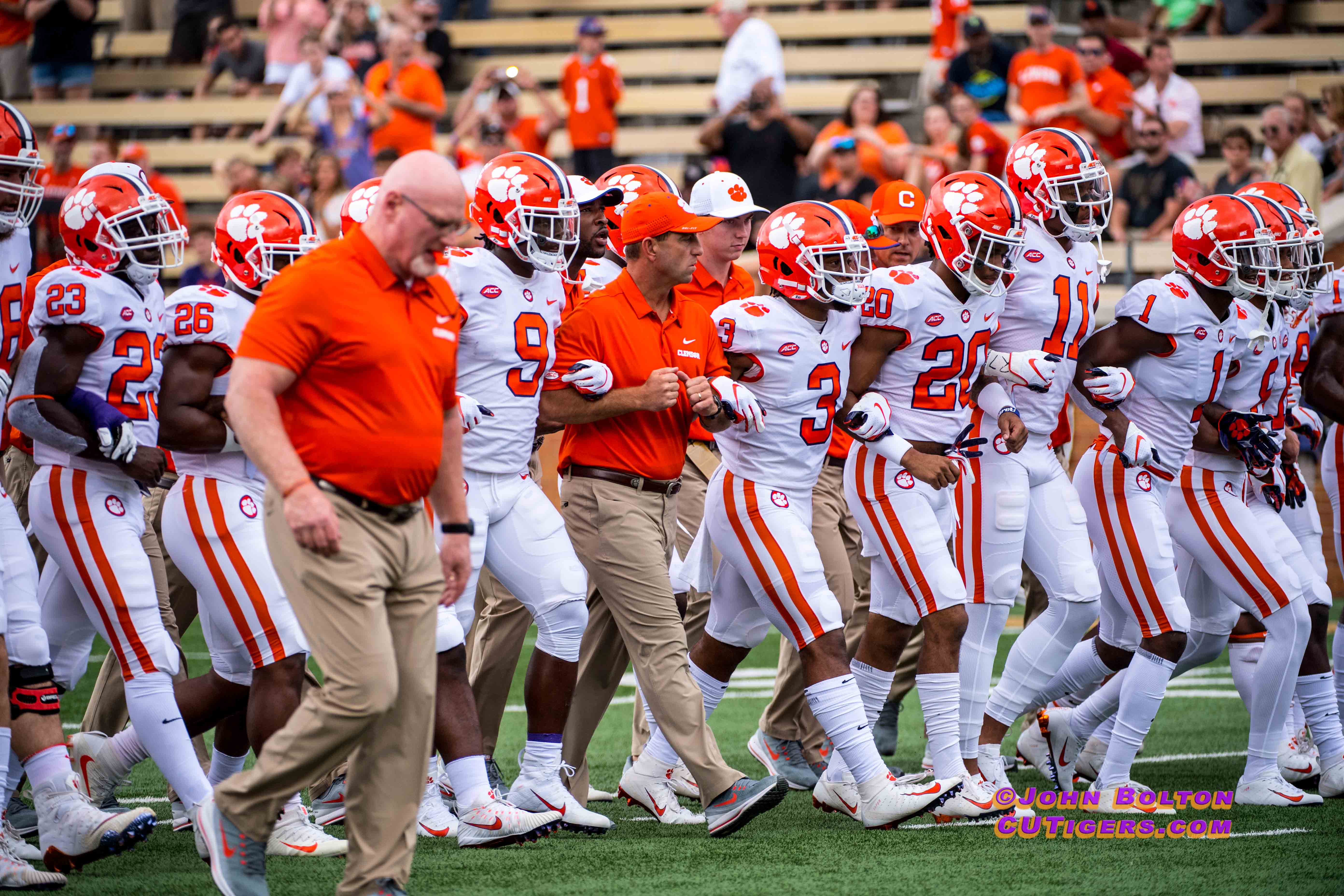 The Tigers exerted their will on both sides of the ball with an unstoppable running game of historic proportions. They finished with 471 rushing yards, the fourth-most in program history, and 698 total yards, the fifth-most in program history. The 60-point margin of victory is the most ever for the Tigers against an ACC opponent, breaking the previous mark set in their 59-0 win at Miami in 2015.

Amazingly, the Tigers’ offense took a little while to get going. They went three-and-out on their opening possession and Trevor Lawrence, in his first career road start, fumbled the ball on their 41 yard line on the next possession. Lawrence, of course, suffered a head and neck injury last week in his first career start, leaving the Syracuse game in the first half. He showed no ill effects at Wake, though, and soon found his groove with the support of a sensational ground game that averaged 11.8 yards per rush. Lawrence was 20-25, with several screen passes, for 175 yards, 2 touchdowns and no interceptions. He also had a 13-yard run but took a couple bad sacks. The Tigers had to punt again on their third possession after completion to Tee Higgins for a first down, their first of the game. With 6:34 left in the first quarter, however, Travis Etienne exploded on the first play of the Tigers fourth possession for a 59-yard touchdown run, and that set off an avalanche of explosive plays and scores. 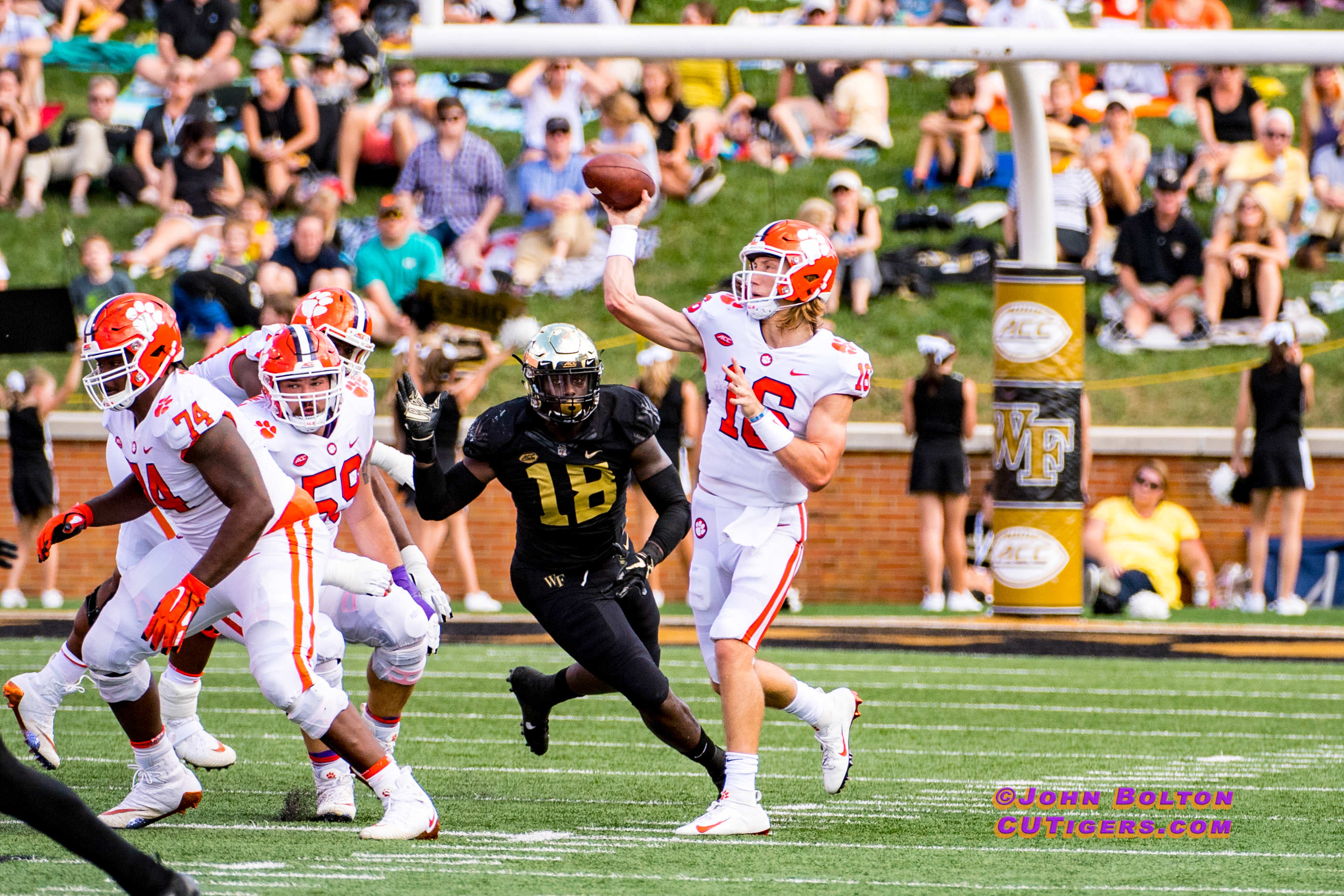 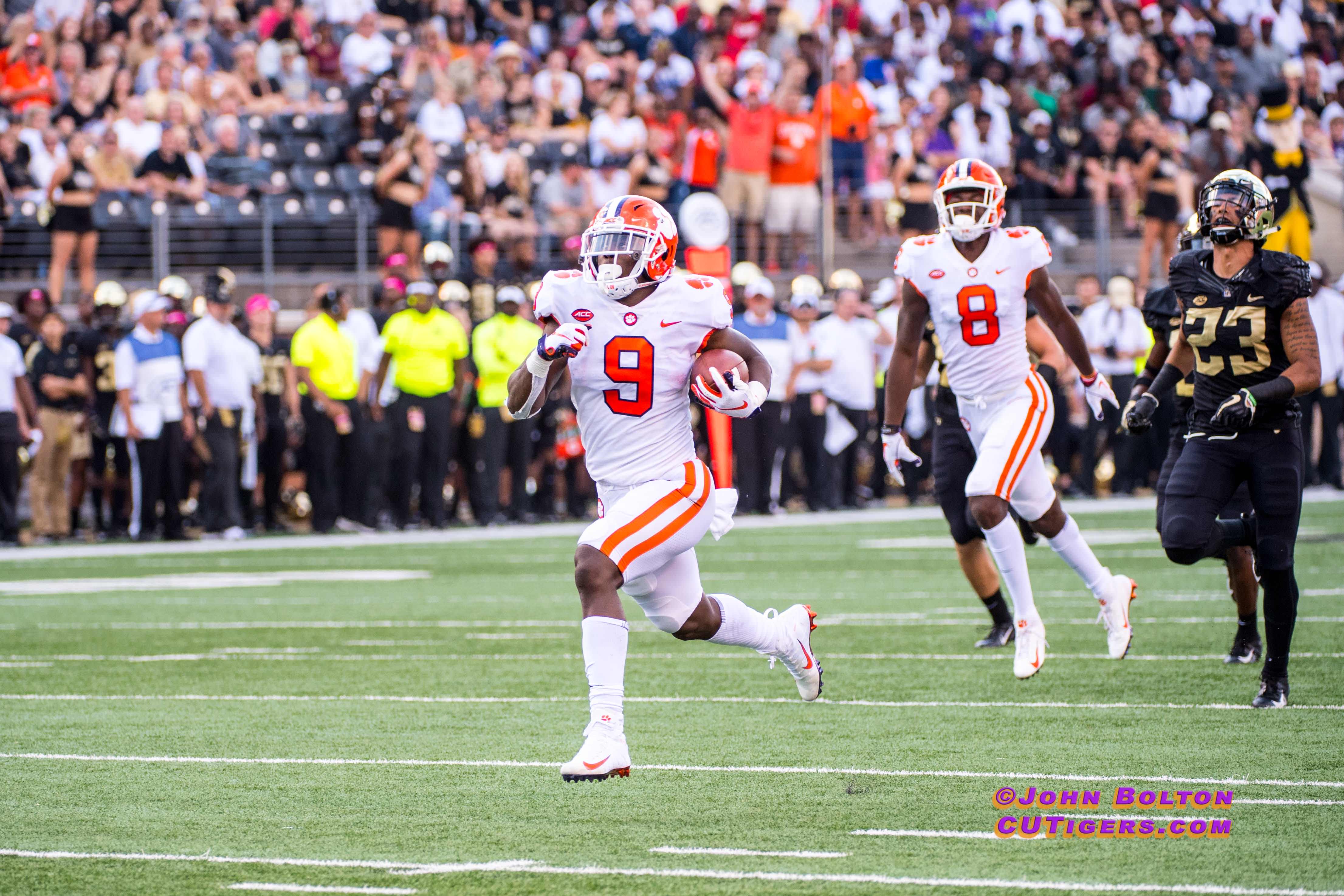 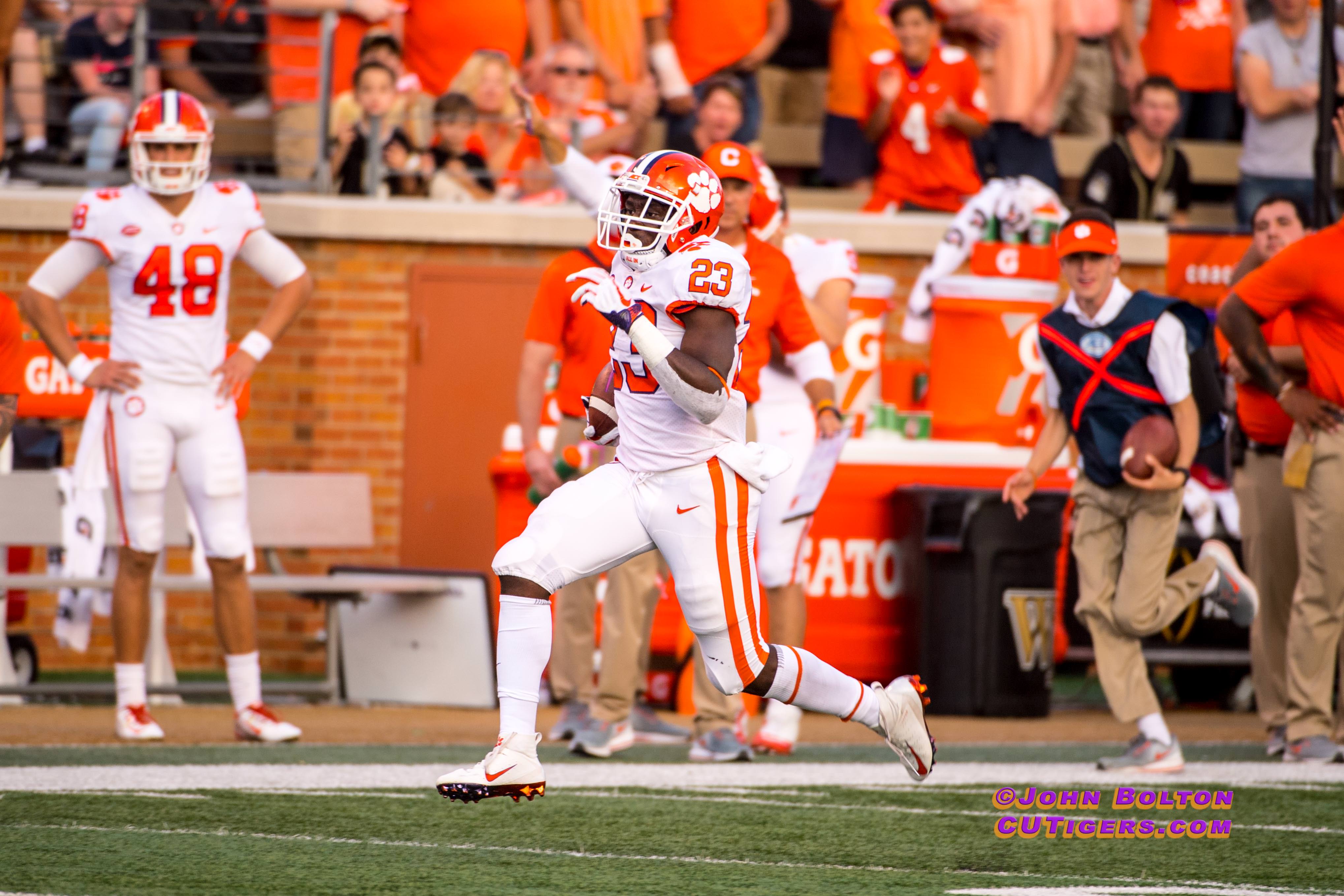 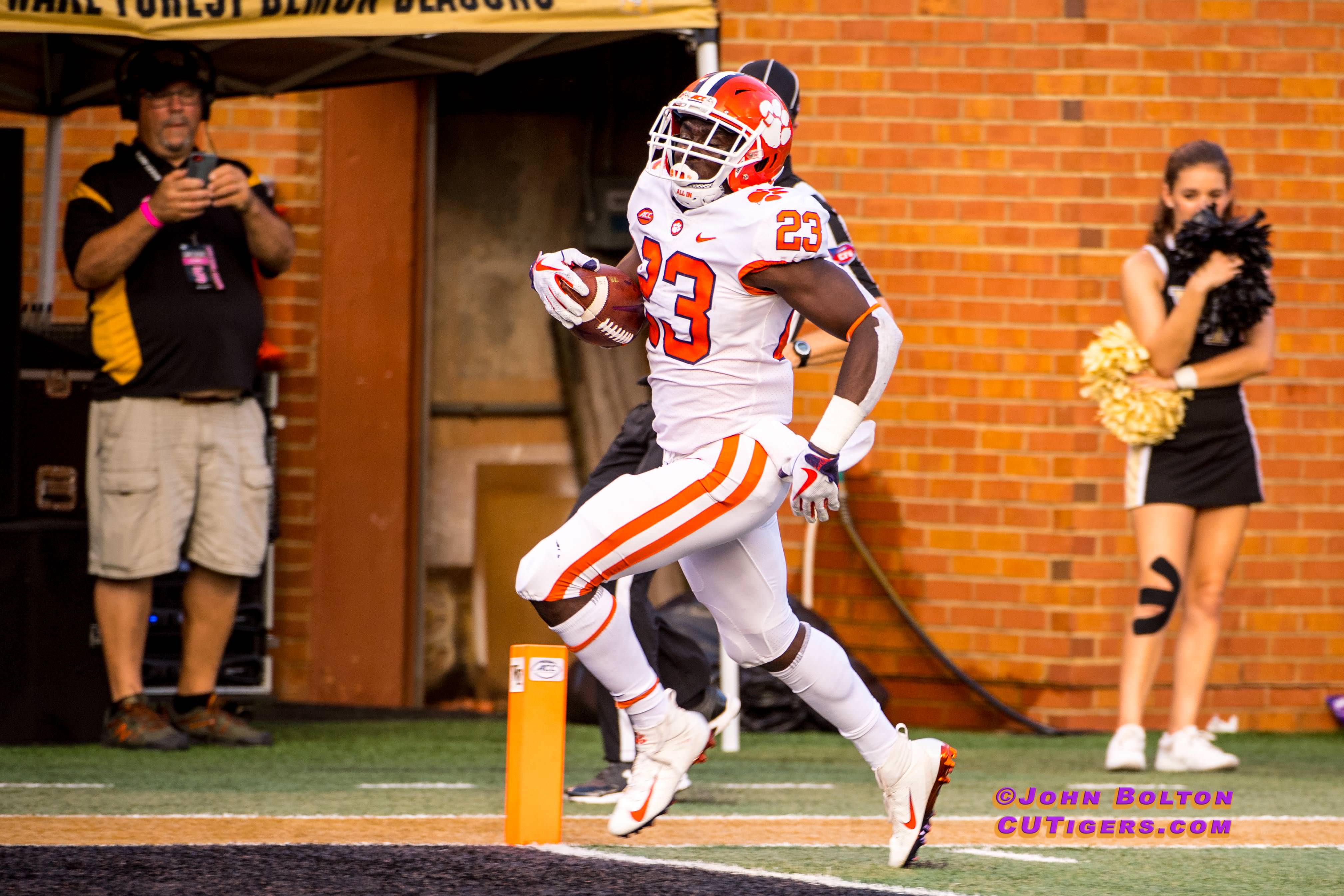 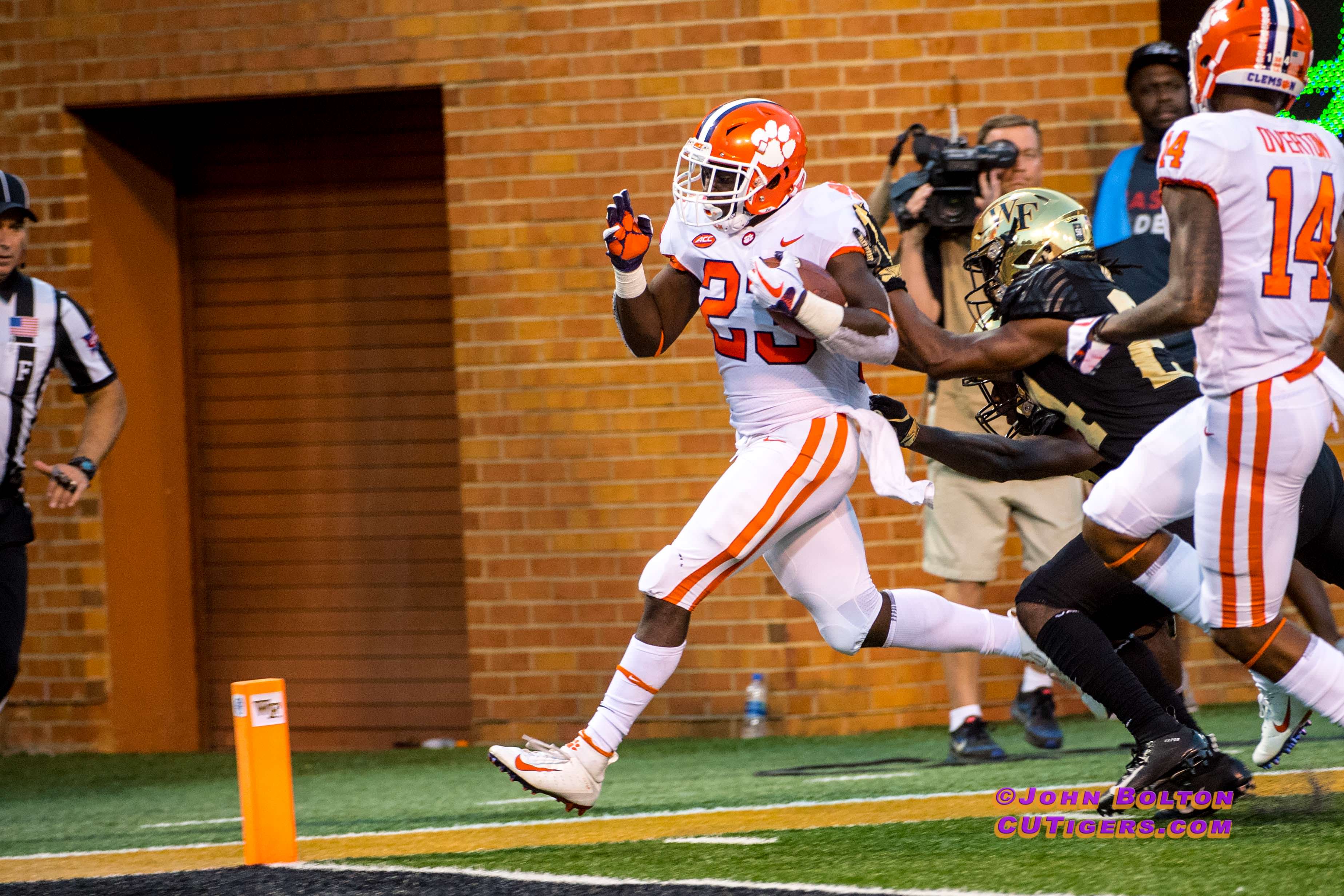 Remarkably, the Tigers would break three long touchdown runs on their first play from scrimmage—twice by Etienne and again by freshman Lyn-J Dixon. Etienne continues to make a serious push for joining the Heisman discussion with his 4th straight game with more than 100 yards and at least 2 touchdowns. It was his second straight game with 3 touchdowns, after he carried the Tigers to victory against Syracuse last week, scoring all 3 of their touchdowns and breaking 200 yards for the first time in his young career. Etienne has now scored 10 touchdowns over a 15-quarter span! He was #12 in the nation at 8.14 yards per carry entering the game and more than doubled that today with 16.7 yards per carry for a total of 167. He is now #7 in the nation with 9.17 yards per carry. But Etienne wasn’t the entire story of the Tigers’ monumental rushing performance. Adam Choice also set a career record with 128 yards and a touchdown on 10 carries, and freshman phenom Lyn-J Dixon went for 163 and 2 touchdowns on 10 carries! Dixon also had a 41-yard reception, so he finished with over 200 yards in just his first game with a significant number of touches. The coaches were raving about Dixon in August camp, saying that he was even further ahead of Travis Etienne at that point last year, and it was around this point of the season that we saw Etienne move up the depth chart. I asked Dabo after the game if they were reaching a comfort level with Dixon that would allow him to start seeing more substantial playing time in meaningful games, and he said that today was certainly a big step forward for Dixon in that regard. But Dabo also pointed out that there is only one ball to go around, and the Tigers have arguably the deepest running back group in the nation. You’re obviously not going to take carries away from Etienne, and it’s hard to take them from Choice after the game he had. Feaster, who hurt his shoulder in the first half and did not re-enter the game, has also been running well. Still, Dixon is something special—very similar to Etienne. He is a big play waiting to happen every time he touches the ball, and it will be harder and harder to keep him off the field—especially as he learns the offense and improves in his pass protection. Dabo told us after a scrimmage back in August that he thought they could have the best and deepest running back group in the nation, and that statement is beginning to look prophetic. 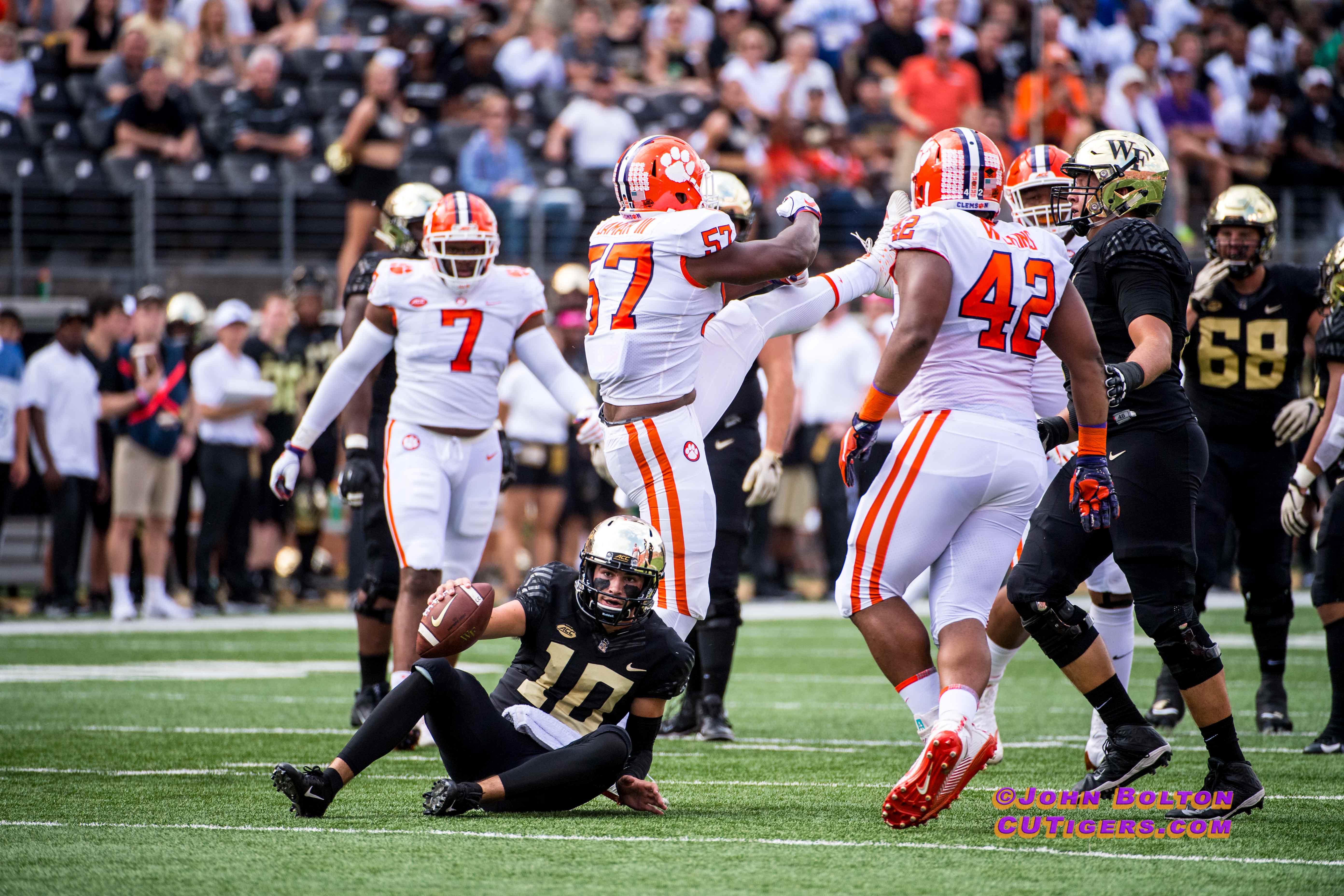 The Tigers’ defense was every bit as impressive as the offense, holding Wake to just 3 points and 249 yards of total offense. Wake was #29 in scoring offense—ironically, one spot ahead of the Tigers—averaging 38.2 points entering the game. They were also #17 in rushing offense, averaging 244 yards per game, but managed just 175 rush yards against the Tigers, with nearly half of them coming in the 4th quarter against the backups. As I suspected would be the case, starting corner Trayvon Mullen, who rolled his ankle last week against Syracuse, did not start the game and played sparingly. Mark Fields started in his place after missing last week’s game with a suspension for rules violation. He played well but dropped an easy interception for the second straight game, having dropped the easiest one he will ever get against Tech in Atlanta. Dropped interceptions has been a recurring theme for the defense this season, and not just by Fields. K’Von Wallace dropped two at Texas A&M, the latter finding its way into the wide receiver’s hands for a touchdown that gave the Aggies an opportunity for a 2-point conversion to tie the game. Fortunately, Tanner Muse did not repeat his drop against A&M and came up with the Tigers’ second interception in as many weeks after recording no interceptions in their first 4 games. It was the 14th straight game with a turnover for the defense. Tre Lamar had 2 of the Tigers’ 3 sacks, and Clelin Ferrell recorded his 6th sack of the season, tied for 8th in the nation and 1st in the Power Five for active career sacks. The Tigers also finished with 12 tackles-for-loss, including 2 apiece for true freshmen K.J. Henry and Xavier Thomas. Chris Register, a team captain for the game, also chipped in 2 TFL’s. The defense forced an impressive 8 three-and-outs in the game. Redshirt freshman DT Jordan Williams was back in action for the first time since bruising his knee in the opener. 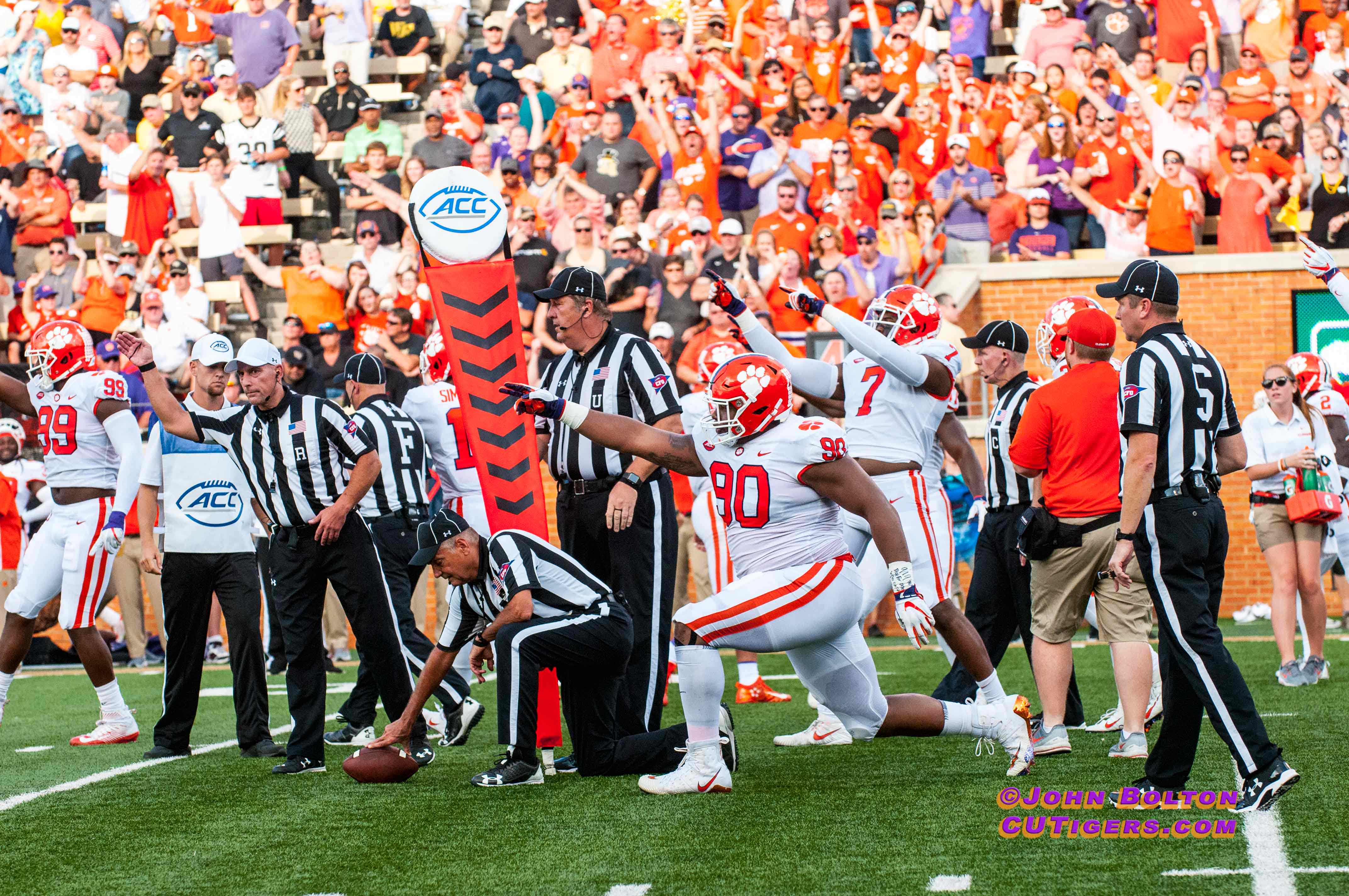 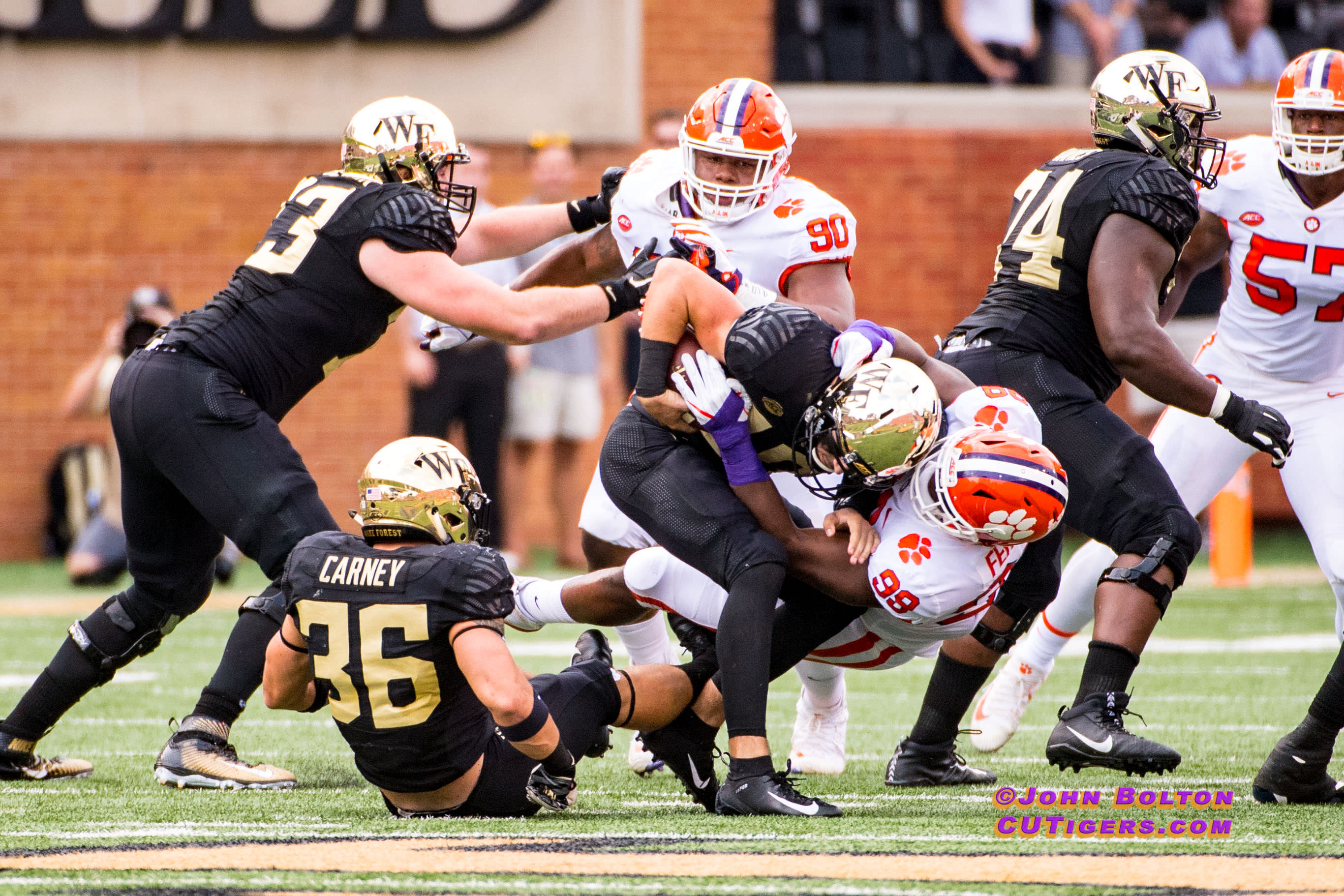 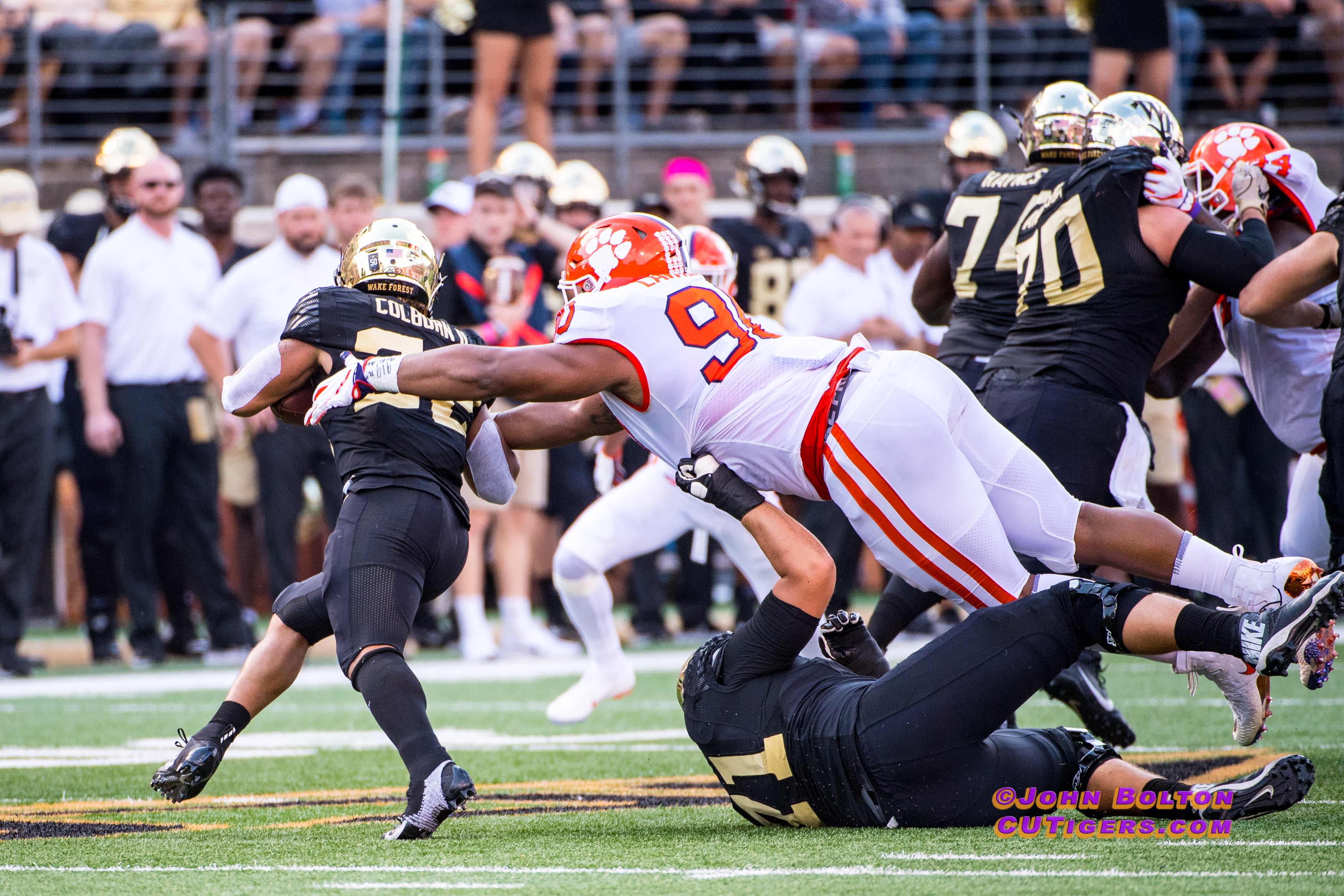 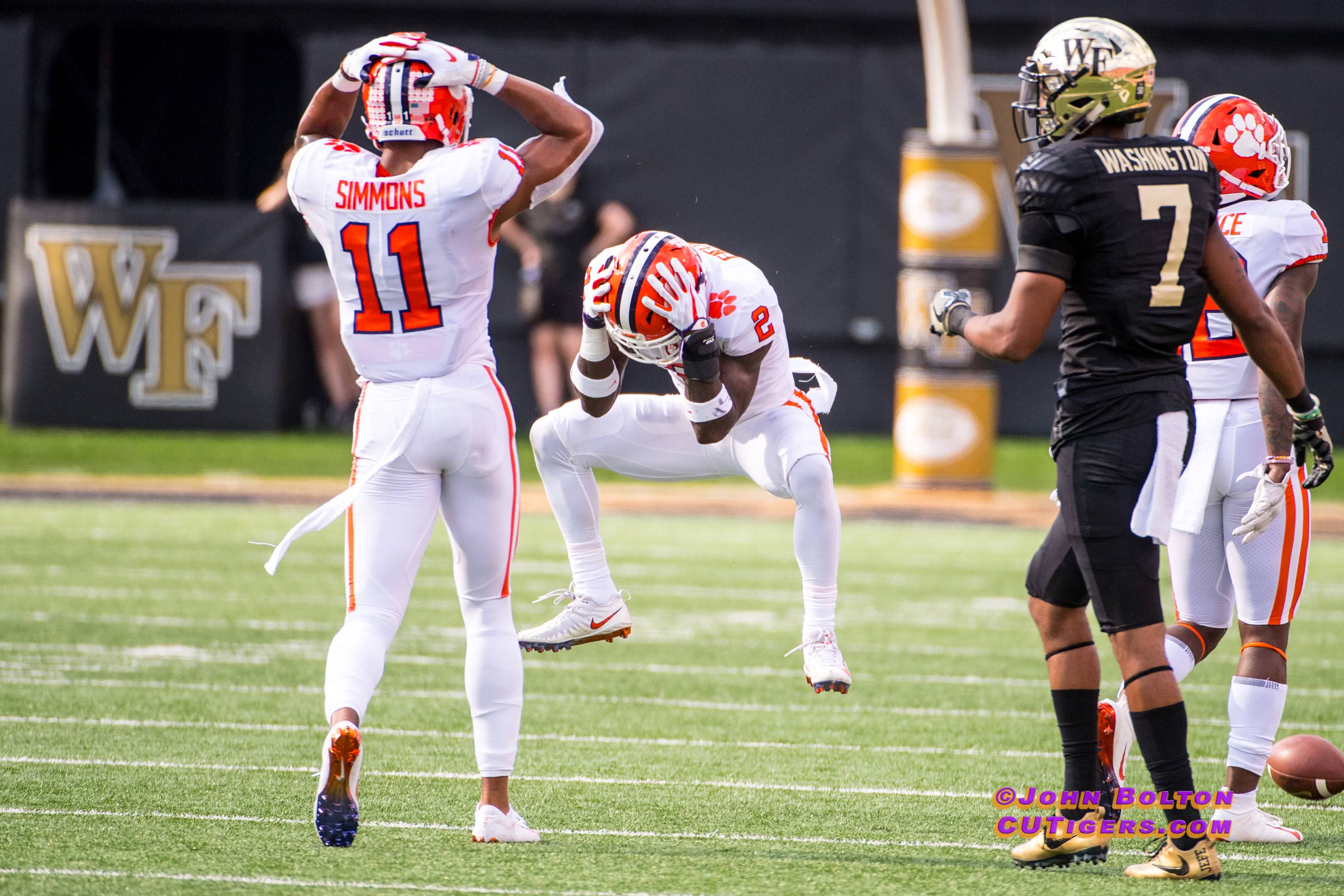 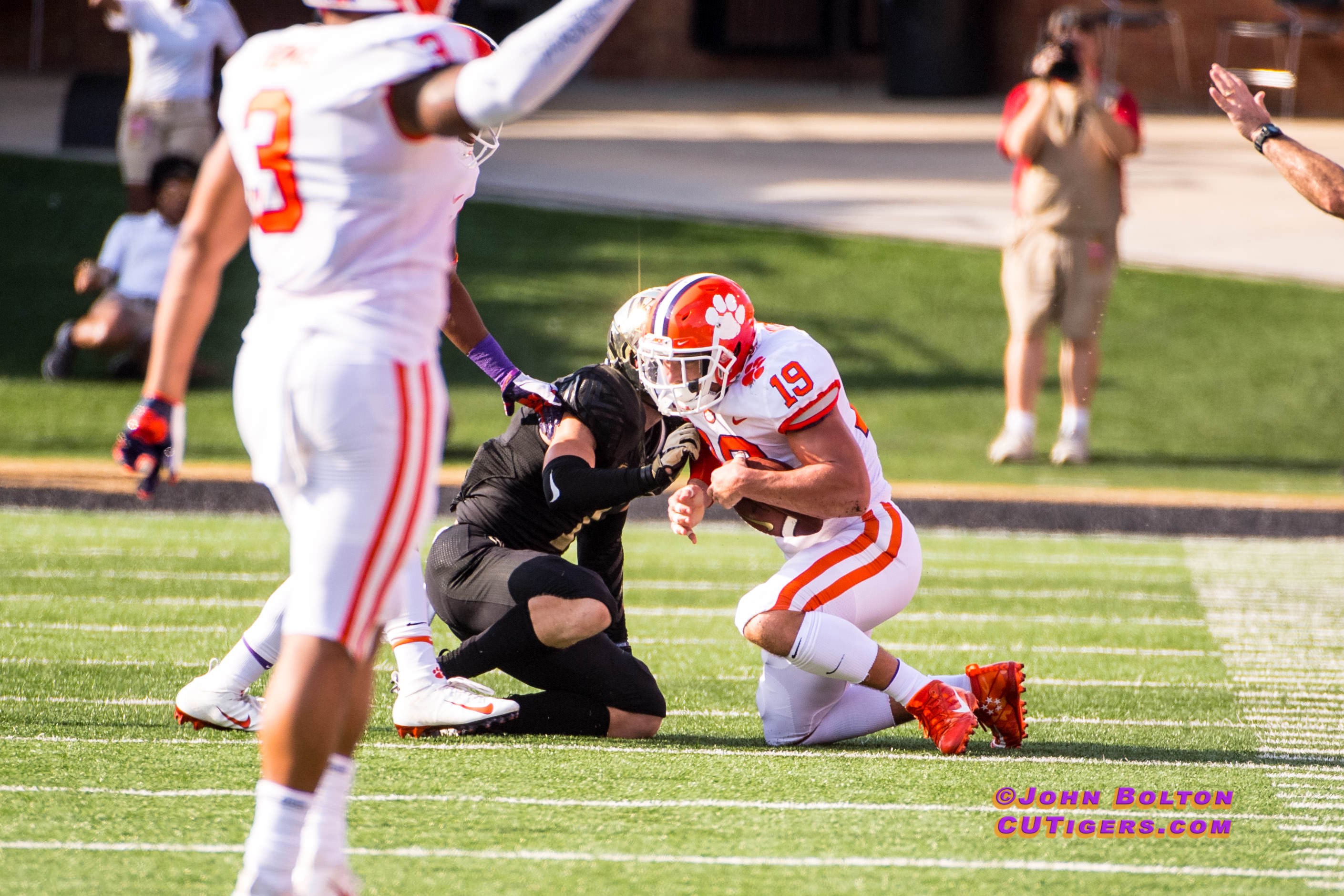 Hunter Renfrow not only caught a pass for the 34th straight game, he also completed a pass at quarterback and punted the ball 42 yards! He also made a big block on Dixon's long touchdown run at the end of the game. How's that for a Jack of all trades?! Renfrow doesn't get the national recognition that he should, but he can seemingly do it all on the football field. We haven't seen him play on defense at corner yet, but I'm sure if the Tigers need him to, he can do that at an exceptional level as well. Hunter told us last week that he believes the most important ability is "availability." He is one of the best examples of that concept that I can remember. 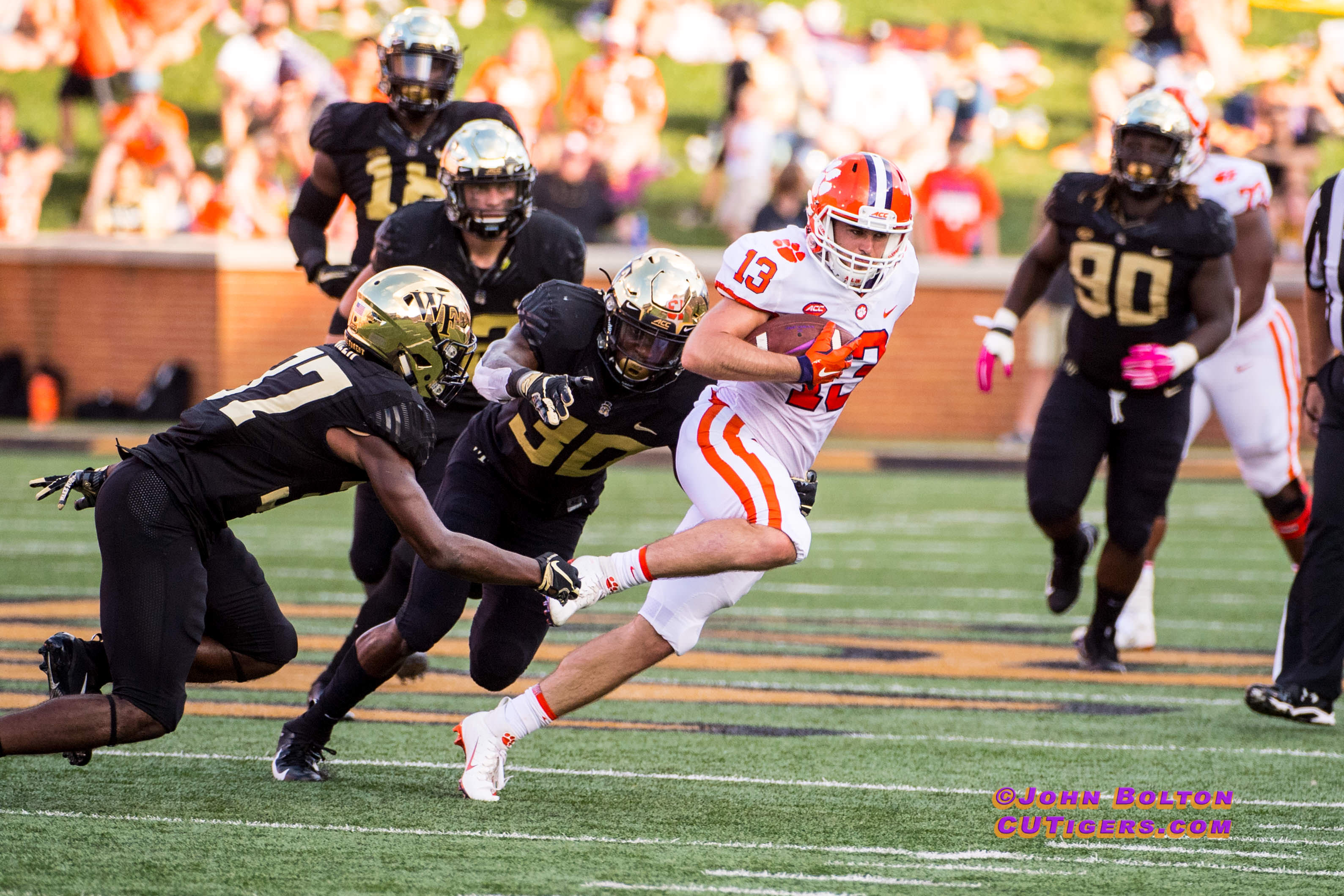 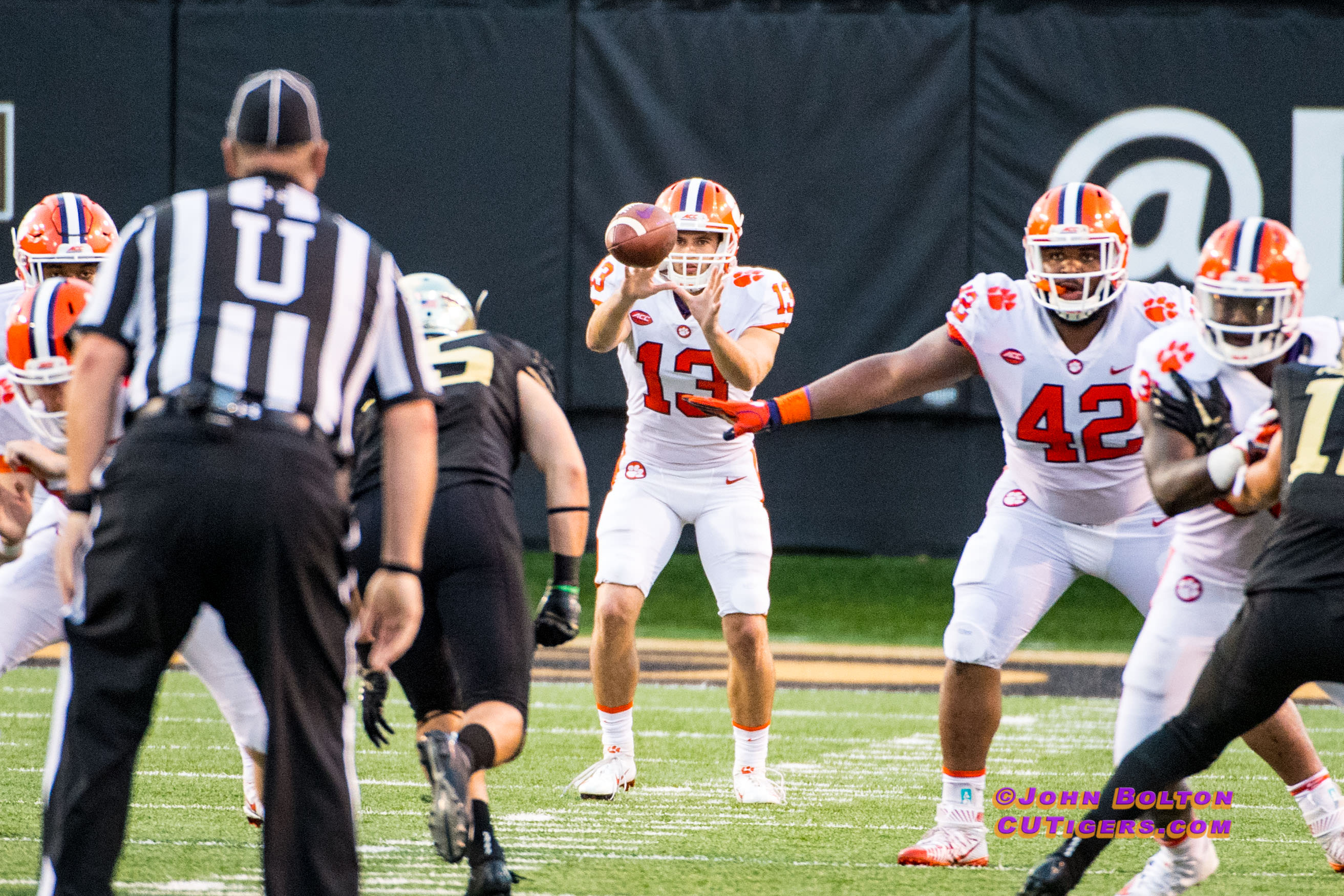 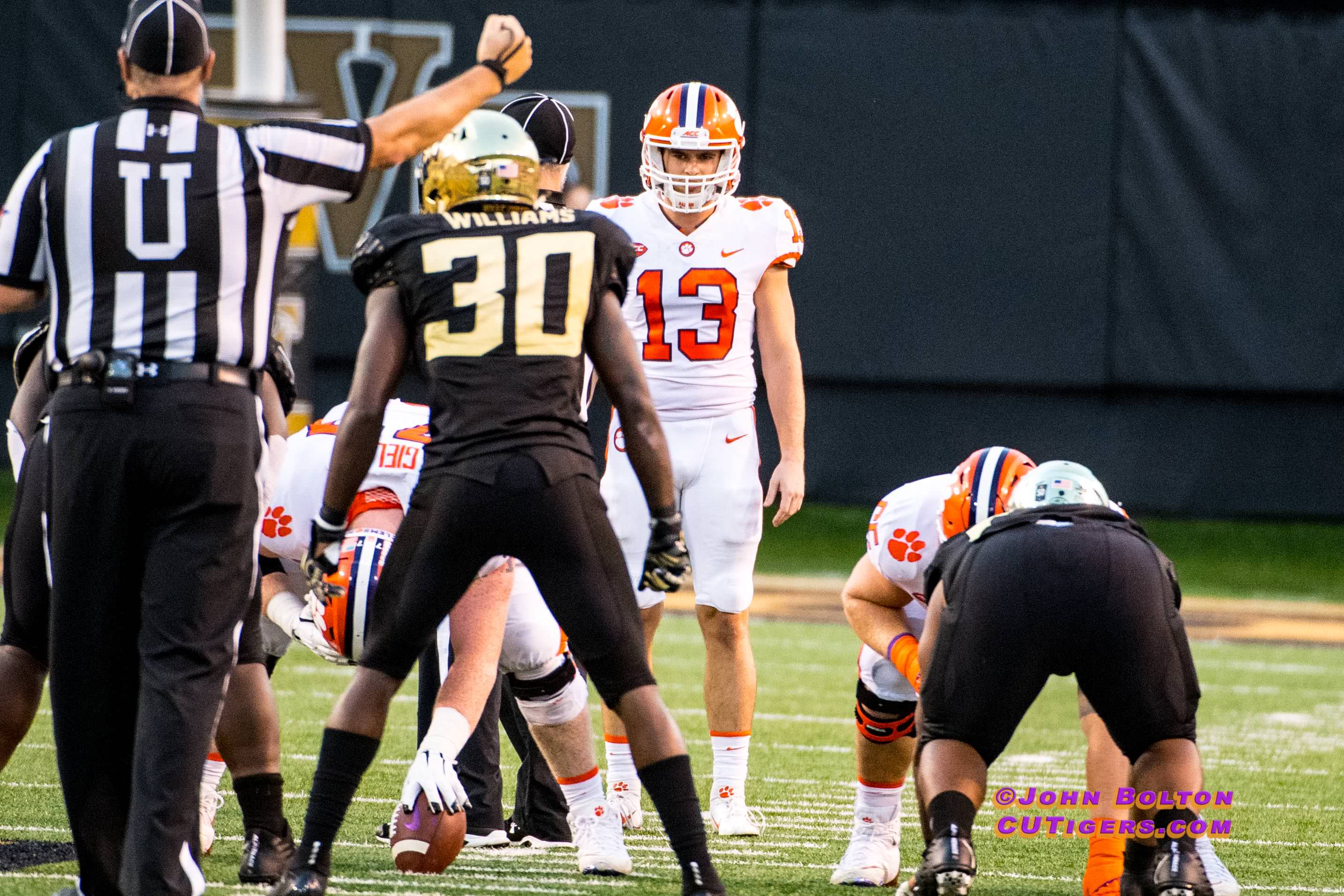 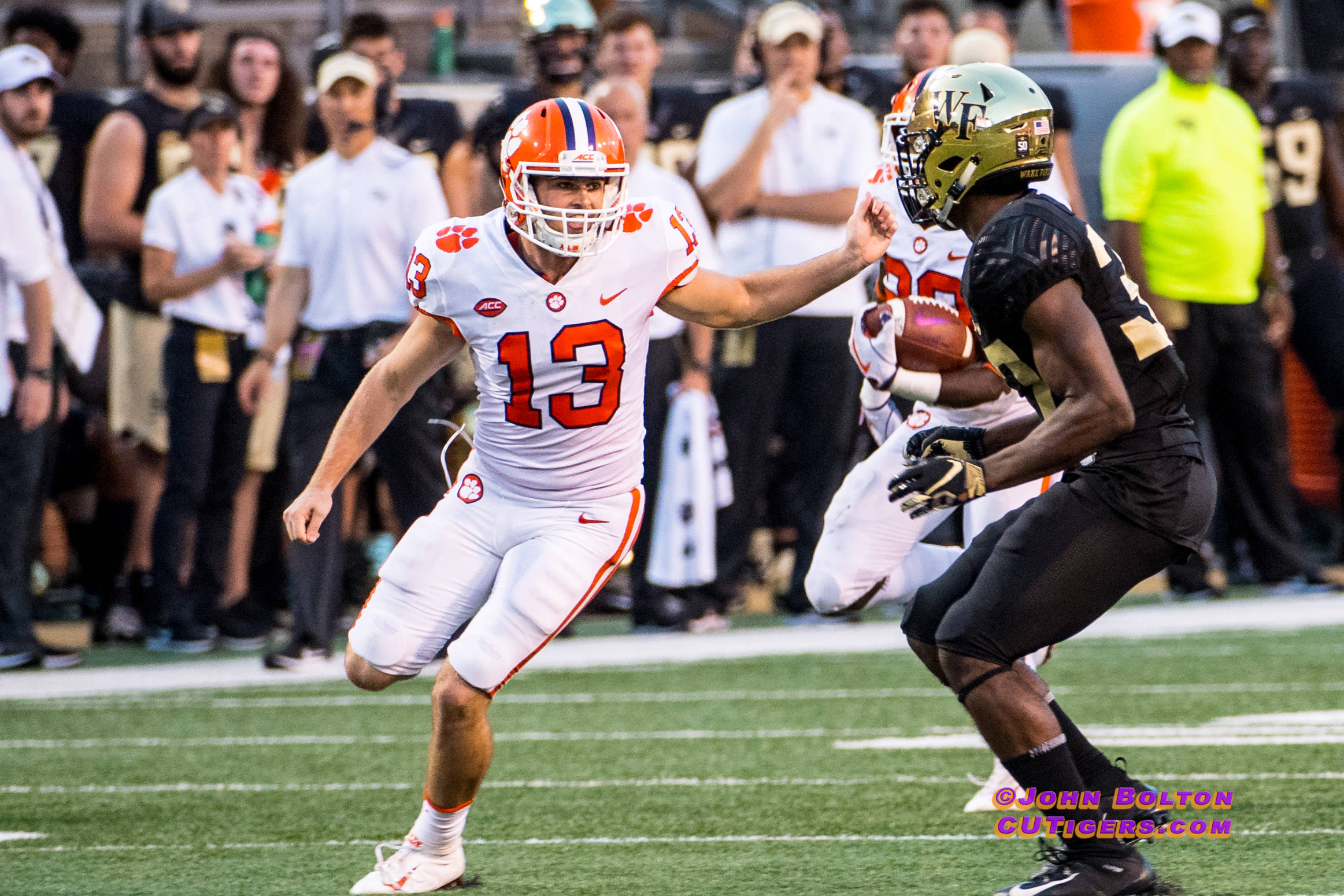 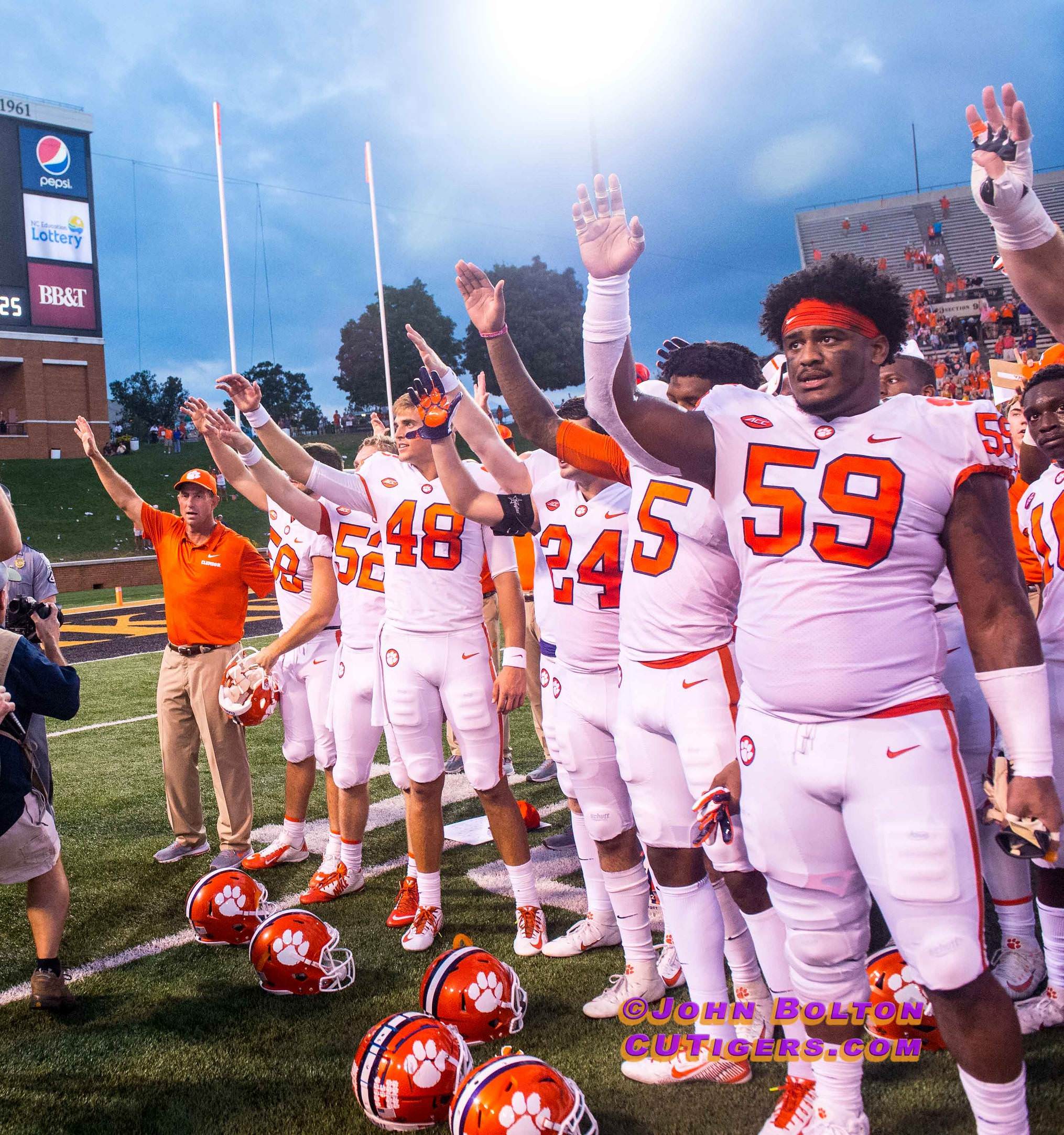 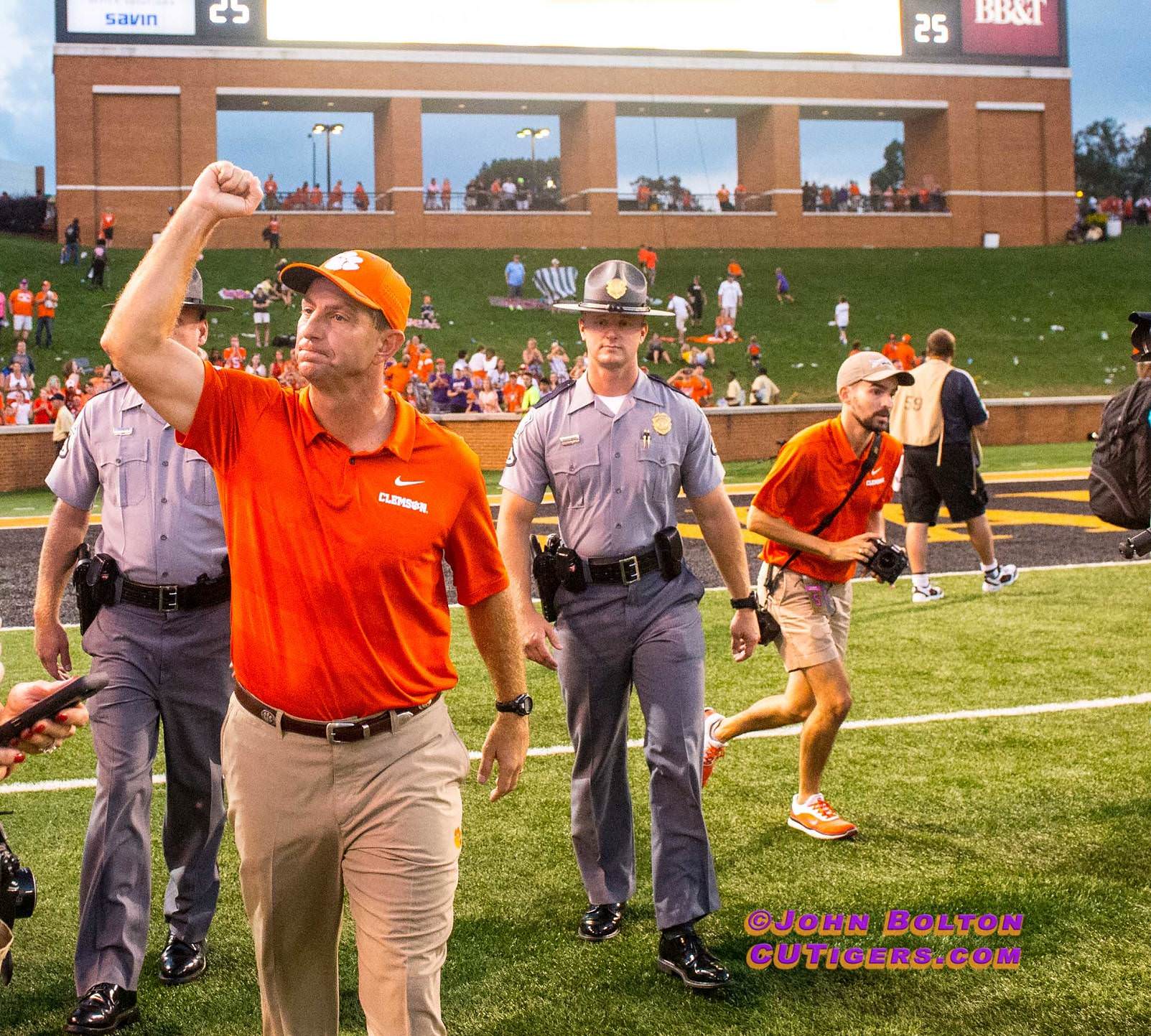 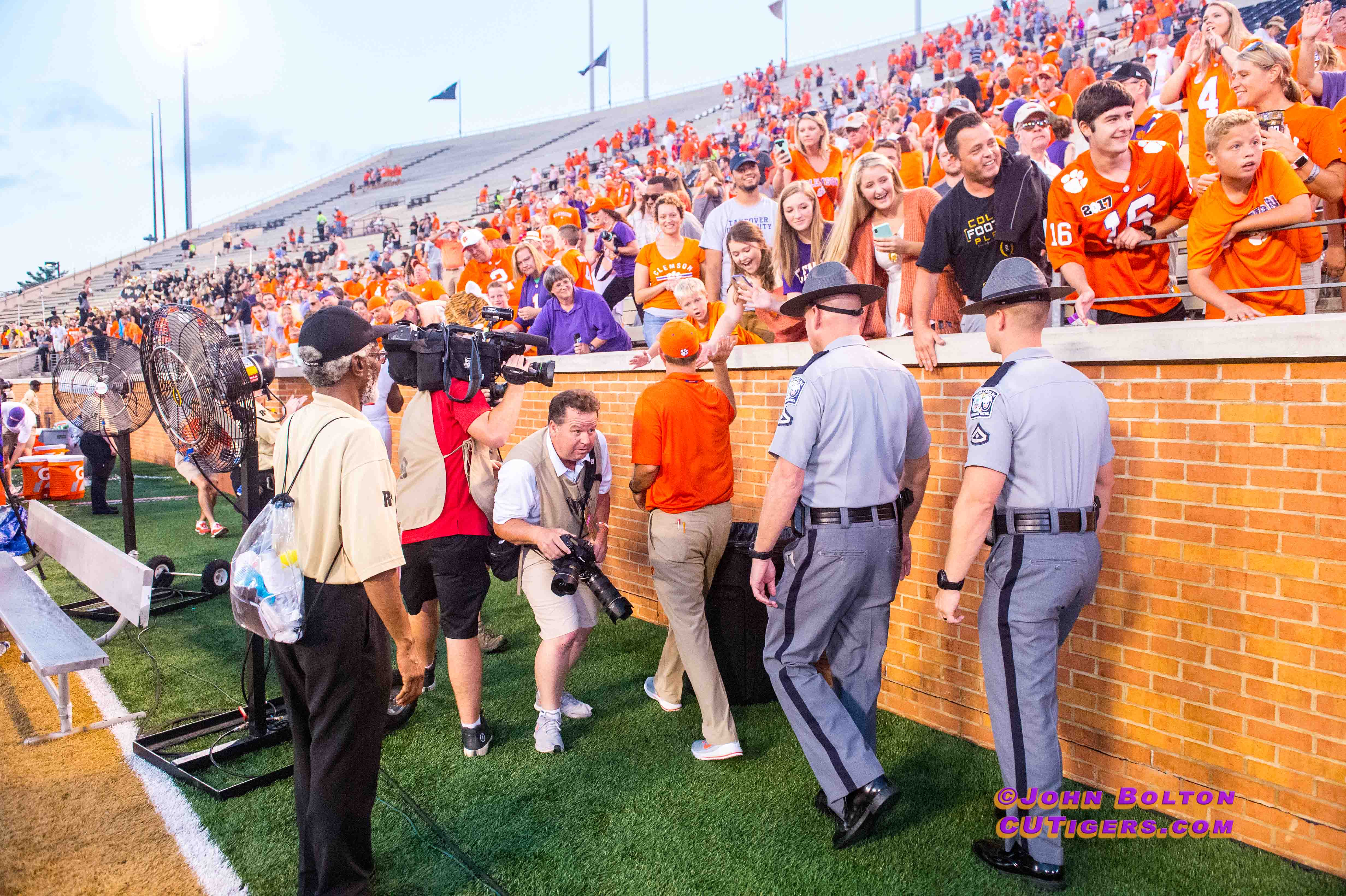 Dabo said it was the Tigers’ most complete game, and this is what they are capable of doing to just about any team on their slate when they put it all together. I had a gut feeling that the Tigers would do just that, which is why I predicted a score of 62-20 in my preview (READ HERE). If I knew they were going to play one of their best games on defense as well, I would have predicted 62-3. The one “x factor” I was unsure about was how they would handle the tragic news of C.J. Fuller’s death on Wednesday night. He had so many close friends on the team—especially among that running back group—that it would certainly be understandable if their minds weren’t 100% on Wake Forest. It was a second gut punch in a row after the drama that unfolded the previous week with Kelly Bryant. However, the leadership of the team clearly carried them through, and they ironically played one of their best games ever—particularly from the running backs. It was the first time in program history that the Tigers saw 3 players rush for over 125 yards in a game. Dabo said after the game that C.J. was looking down on them and smiling. The team will attend Fuller’s funeral on Sunday, and they will enjoy a much-needed and well-deserved bye week after a perfect 6-0 start for the 14th time in program history, their 6th in the last 8 years. The Tigers have now won 22 consecutive Saturday games, breaking a streak of 21 games from 2014 to 2016.

I’ll have more to come, so stay tuned!