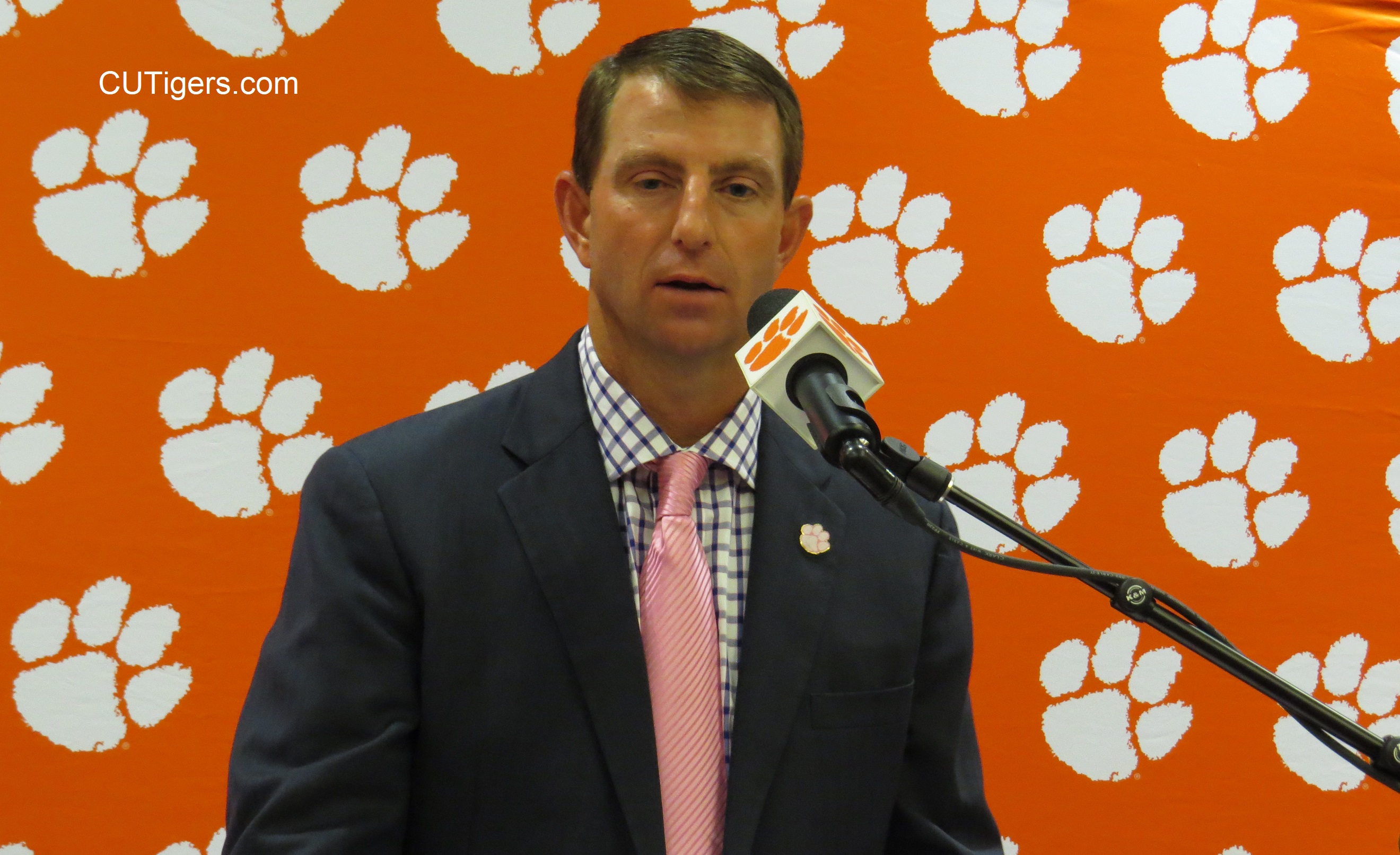 CLEMSON HEAD COACH DABO SWINNEY
On the game:
“That’s two games in a row that we’ve put together a complete effort. That’s what we’re capable of doing. Our guys were on edge all week because we’ve had a lot of close games with NC State. I was actually worried about them peaking too early, but they were ready to play. I’m really proud of them.”
On the complete performance by the Tigers:
“Our guys were locked in and committed to preparation all week long. That was a dominant performance today. NC State’s a good football team. We complemented each other in all phases of the game and put together a total team effort. We committed no turnovers on offense and forced three turnovers on defense. We had great energy from start to finish. We also played 85 guys and picked up the second-largest margin of victory against a ranked opponent for us.”
On the impact of the fans on Homecoming:
“I really appreciate our fans. They gave us an awesome environment at Death Valley today. The noise level seemed to create problems for NC State. It was a great atmosphere and a lot of fun out there today.”
On the solid offensive showing:
“Offensively, we threw the ball for 380 yards, and we were 8-15 on third down. Honestly, a lot of our passes were initially run calls. We just took advantage of what was there. Trevor Lawrence was on the money all day. The receivers did a great job, too.”
On the significance of the win moving forward:
“We control our own destiny in our division. This was a huge win for us. We’re going to enjoy it tonight and show up ready to prepare for Florida State on Monday.”
CLEMSON DEFENSIVE COORDINATOR BRENT VENABLES
On the play of the defense:
“Our guys played really well. [I’m] super happy for them. We’re getting into a good rhythm here in the last three games or so. I’m just really proud of the effort our guys put out there today. We played a lot of guys. We played with great physical toughness, and we played with precision in defending the passing game. Our guys came out and really made a statement from the jump with a good three-and-out. All three levels were really good today.
On the play of Jalen Williams:
“He can cover. [He] gives us a guy that understands how to play in the box. He’s done a lot of things since his freshman year for us. That was a huge interception. [He] did a great job of getting his head back and ripping the ball out. What a great play from a timing standpoint. Jalen played really well today and was a real fixture in what we were trying to do gameplan-wise.

On comfort in games:

“I felt really comfortable. It was really good. The offensive line played really well, the backs blocked well, and obviously, the receivers caught the ball well. All the way around, we played a good game.”

On opponents keying in on certain strengths:

On coaches’ message for game:

“We just didn’t want to leave any doubt…of [whether] the game should have gone a certain way. At the end of the day, I think we did that. We didn’t leave any doubt. It’s clear that we won the game by a good bit. That was the coaches’ message to us.”

“I think all of us know how talented [Trevor Lawrence] is from the arm perspective with what throws he can make. It was really good to see him do it on that stage. We’re talking about a top-25 matchup. It’s the first time for him really in a big game like that. For him to come out and not just make the big throws but manage the system and get to the throws. Not all of those were called designs telling him where to go. A lot of them were run/pass options. He just understood what we were trying to accomplish. They had numbers in the box, and he made those throws.”

On the offense’s versatility:

“Jeff [Scott] and myself, over the past four years, have tried to build an offense that can take advantage of what’s available. I think we’ve done that in the past. What’s comforting to see for these guys is that now they can understand the identity of what we’ve been in the past...an offense that’s going to take advantage of what’s available. If we need to run it, we can run it. If we need to throw it, we can throw it. If somebody’s dead set on taking something away, we have to take what’s available. It was good for those guys to get a glimpse of what they’re capable of.”

“I’m really pleased with the way our guys came out after an open week. Something we’ve been talking about all year long with the offense is getting off to a fast start. I don’t believe we’ve scored on the first drive [this season] until today. We knew that was going to be critical versus a good team like NC State. We really wanted to set the tempo and help our defense out by getting a touchdown, so [I’m] really pleased by that.”

On NC State “daring” the offense to throw the ball:

On momentum of the opening drive:

“It was important. The last couple of weeks we’ve kind of had a slow start, so we really wanted to change that and get it started early. We wanted to keep the momentum going throughout the game.”

“We really just try to get ready for the next game. We come in every Monday and focus on the next opponent. We treat the next game as the most important every time.”

On current state of the offense:

“It was second or third down, and we knew they were going deep. I just did my job. The quarterback threw it, the ball came, and I knew I had to attack it. I go against [Hunter] Renfrow every day and, as you guys have seen, Renfrow can catch the ball 180 degrees, so you have to attack the ball. It was a competitive play, and I just went for it.”

On facing a strong passing team:

“Coach Swinney really challenged the back seven to defend the passing game this week. During the Texas A&M game, we gave up a lot of passes, so it was going to be a challenge for us. We had two weeks to prepare, and Coach Venables called a great defense. You can’t give him two weeks to break it down and prepare, because he will execute.”

On the NC State rivalry:

“Top-25 wins never get old, especially in conference play. They’ve been talking all week, and we knew that, for the past three years, this has been a tough game. We knew as a team that we were better, so we wanted to come out and prove who we are as a team.”

On limiting third down conversions:

“Coming in, they were one of the top teams in the nation in third down, and that is a huge indication of success. We wanted to make it an emphasis to slow them down and make it hard for them to convert on third down.”

On seriousness of this game:

“As a team, we really took this game personally because of all the talk that has been going on this week. Every single person wanted to make sure that there were not questions after this game.”

“You have to give Clemson a lot of credit because they played really well. Obviously, I don’t think we did and I own that. We turned the ball over and weren’t good on third down. We didn’t tackle well enough and [Clemson] played a really good football game. I give Dabo, his staff and his players credit. We just didn’t do the things we needed to do today.

On outcome versus past games against Clemson:

“We are disappointed, for sure. I thought we were going to play a heck of a game and we didn’t. Like I said, it just didn’t go our way. It was 14-0, and we had the ball at the 50, and we turned it over in two straight series. It just got away from us, and we couldn’t get in a rhythm. For us, rhythm is important on offense, and we didn’t have any. Defensively, we were in a lot of tough positions today.”

On weakness in the pass rush: