NO.2 CLEMSON HANDS FSU WORST LOSS EVER, 59-10 IN TALLAHASSEE

TALLAHASSEE – The Tigers’ road show of record-setting performances continued on Saturday, as they humiliated Florida State 59-10, handing the Seminoles their worst home loss in history. It also tied the Noles’ worst-ever loss—they also lost by 49 at Florida in 1973, three years before Bobby Bowden took over. The 59 points were the most ever allowed by FSU at home. Three weeks ago, the Tigers won at Wake Forest 63-3 for their largest margin of victory ever against an ACC opponent, and they followed that up with a 41-7 win over #15 NC State, tying their second-largest victory over a ranked team.

As I predicted in my preview (READ HERE), Trevor Lawrence threw for over 300 yards for the second straight game, but the Noles were successful in stopping Etienne and the Tigers’ #9 rushing offense. FSU came into the game with the #8 rush defense in the nation, so it was the second straight week the Tigers faced a top-10 rush defense. Etienne ran for just 45 yards and no touchdowns with FSU loading the box to stop the run. NC State did the same thing last week and held the Heisman candidate to just 39 yards, but he scored 3 touchdowns in that game. 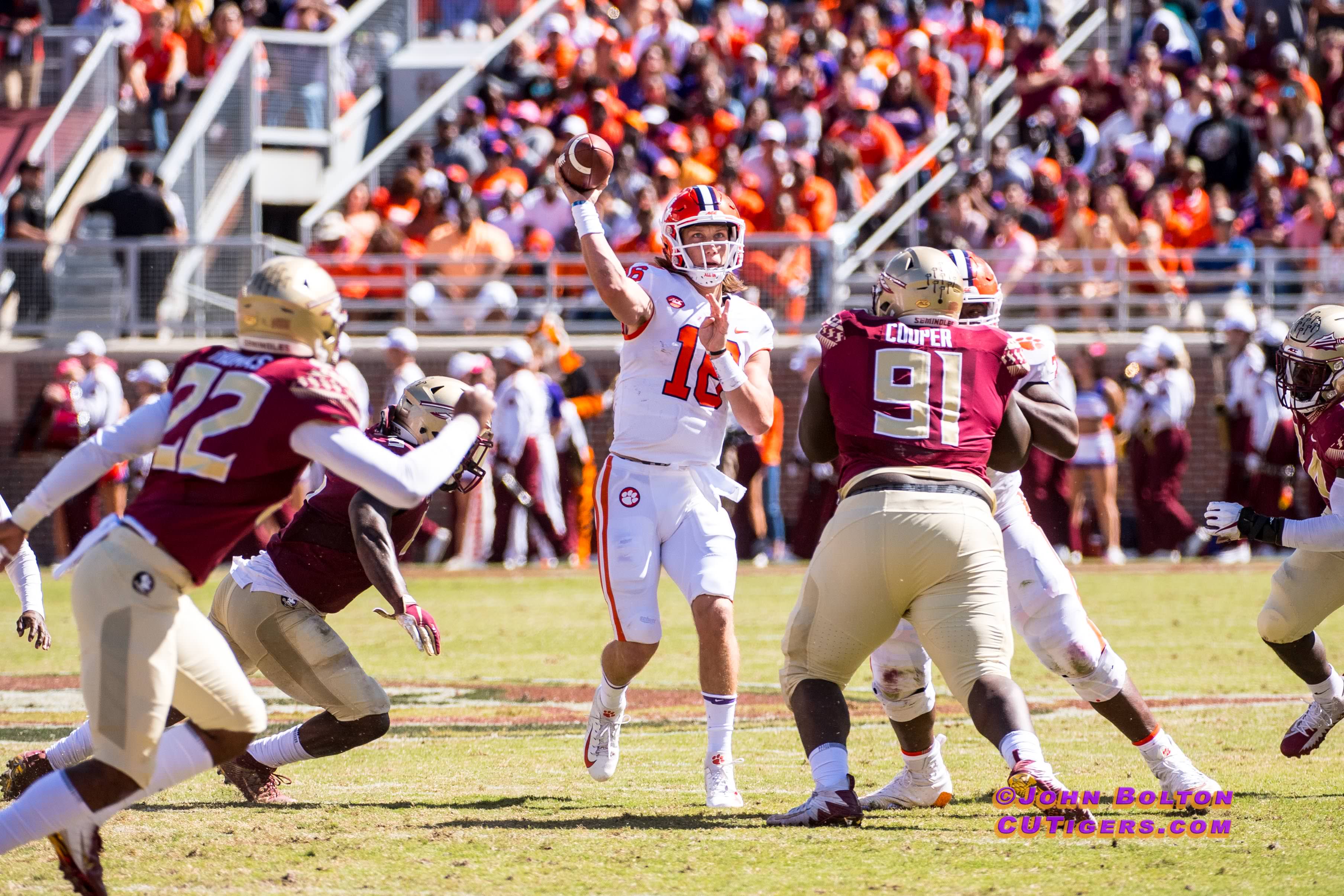 Just as last week, the defensive strategy opened up the passing game for the Tigers, and Trevor Lawrence was once again equal to the task. For the second straight game, his adrenaline got the better of him early, as he over-threw an open Tee Higgins for a touchdown, but Lawrence settled in after the first couple possessions.

It was a field position battle in the first quarter, with 7 punts and no points scored by either team—a first for the Tigers this season. However, the flood gates soon opened for the Tigers in the 2nd quarter. Trevor Lawrence connected with fellow true freshman Justyn Ross for a 41-yard completion just before the end of the 1st. After a missed field goal by Huegel was negated on a roughing the kicker call, the Tigers finally found the end zone on a 3rd and 5 pass to Tee Higgins. The Tigers would score touchdowns on their next 3 possessions to open up a 28-0 lead at the half, and the woes for the Noles were just beginning. 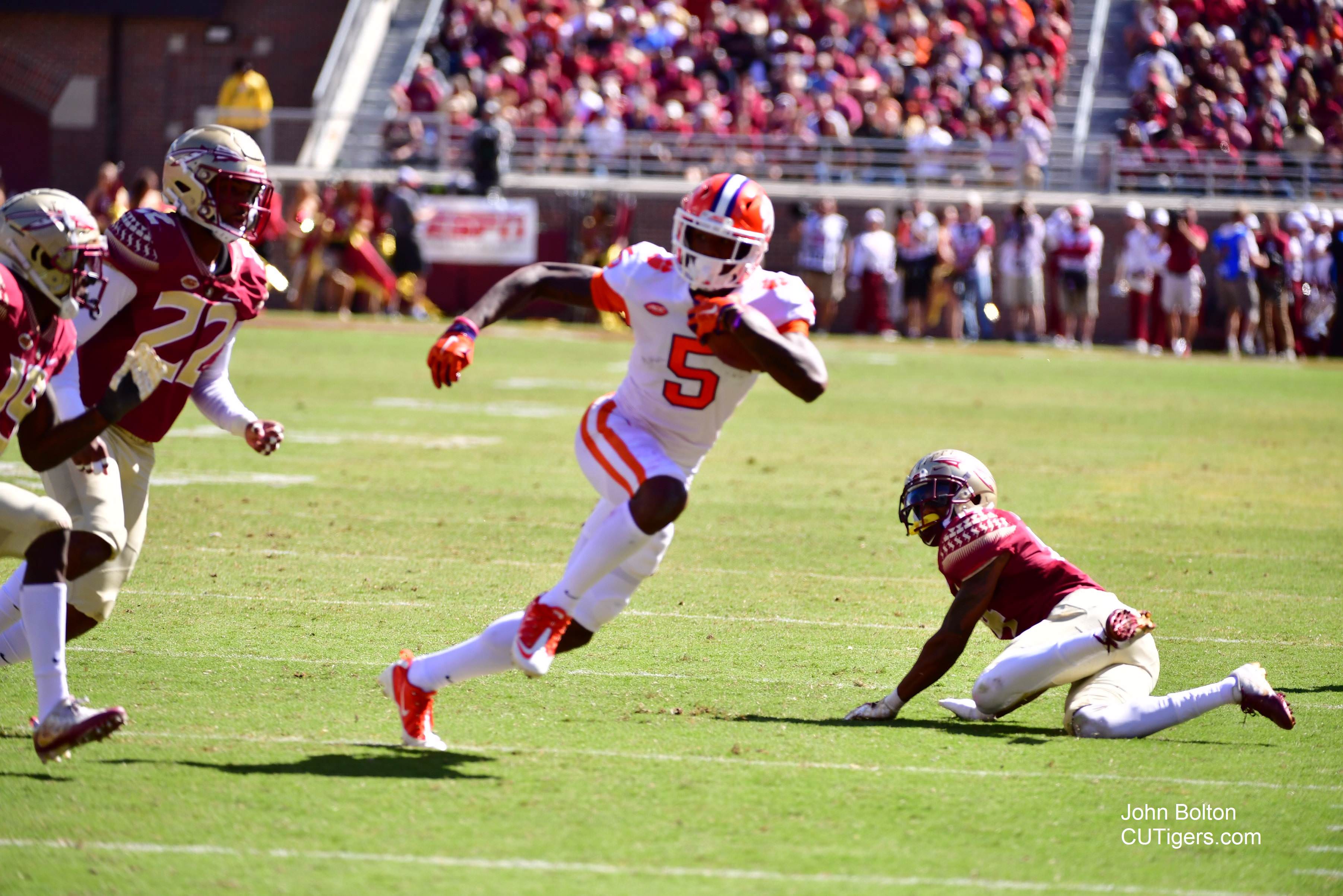 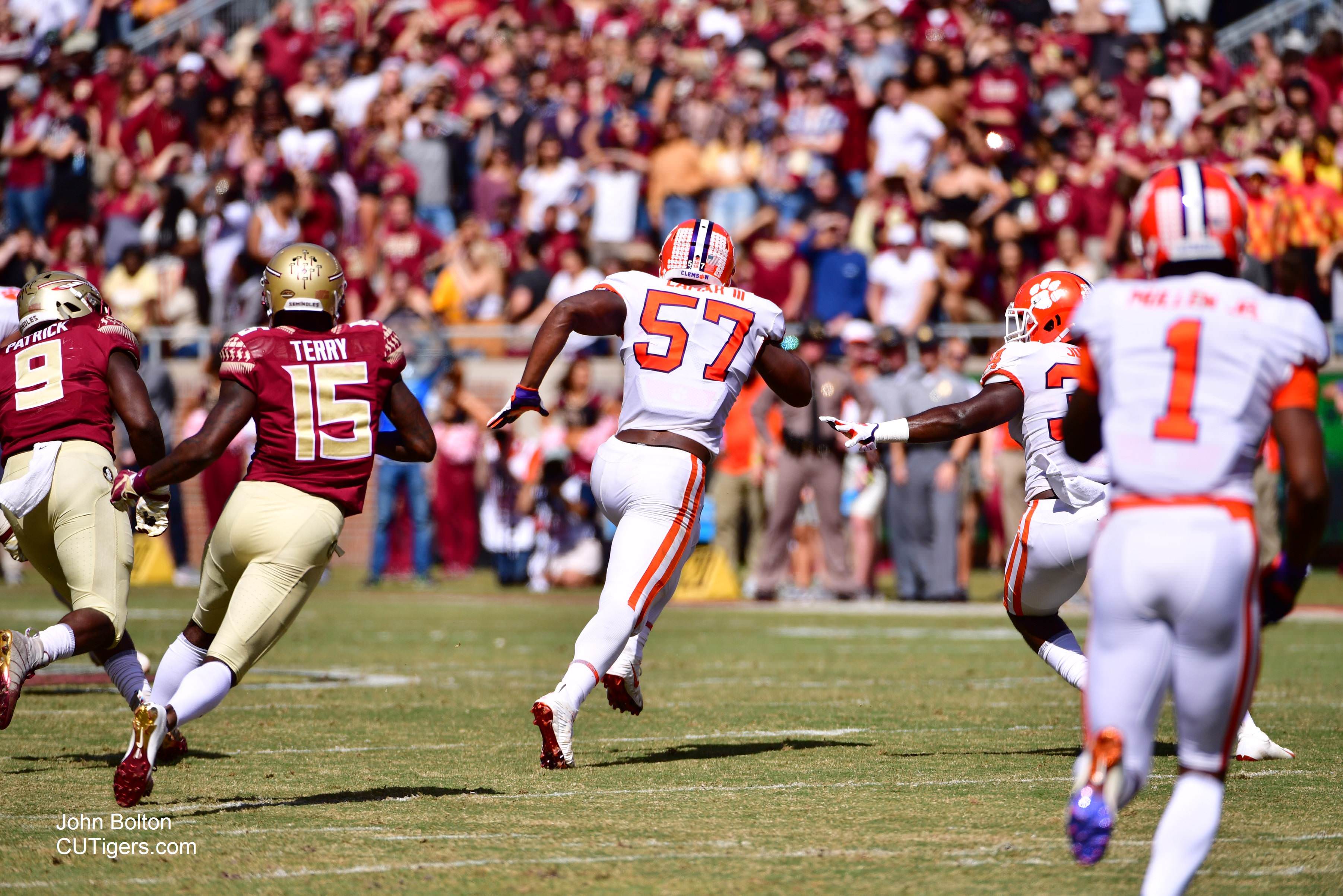 For the third straight game, the defense was superb, holding the Noles without a touchdown until the final 5 minutes of the game and allowing just 247 total yards, 20 yards less than their season average, and an astonishing -21 rushing yards! A year ago, I wouldn’t believe the Tigers would ever go to Tallahassee and hold the Noles to -21 yards rushing. But FSU rushing offense has been shockingly dreadful all season. As I wrote in my preview, they came into the game ranked #125 in the nation, with only San Jose State, Wazzou, Northwestern and Stanford ranked lower. That’s another thing I never would have believed a year ago. Cam Akers was one of the most recruited running backs in the nation and had a fine freshman season last year. Jaques Patrick was also good last season, and I thought they would be tough to stop this year, but they have really struggled. Tre Lamar caught his first career interception and returned it 43 yards. It was the Tigers' 16th straight game creating a turnover and their 4th straight game with an interception (5 total) after no interceptions in the first 4 games. The Tigers did not allow a first-half touchdown for the 9th time in their last 12 games, and the subs were almost as good as the starters. The late touchdown by the Noles was disappointing, but DE Xavier Kelly and DT Jordan Williams each recorded his first career sack. Xavier Thomas collected his 3rd sack of the season, and Albert Huggins had one as well. All-American Clelin Ferrell tallied his 7th sack of the season, tying him for 8th in the Power Five. The Tigers cleared their bench for the third time on the road this season, playing all 72 players. With a tough win at Texas A&M in front of a Gameday crowd of 105,000 at night and blowout road wins at Georgia Tech, Wake Forest and FSU, there probably isn’t a team in the nation with a more impressive road resume than the Tigers.

Tee Higgins followed his deadlock-breaking touchdown catch with another one on the same route in the same spot in the end zone. He now leads the team with 6 touchdown catches on the season. In all, he had 6 catches for 62 yards. It was a huge game for Tee's fellow Tennessee native and best friend Amari Rodgers, though. He had touchdown catches of 58 and 68 yards in the 3rd quarter, finishing the game with 6 catches for 156 yards. He also had 62 yards on 3 punt returns! Rodgers scored the first touchdown of the season for the Tigers in the opener and hadn’t scored since until his two TD's on Saturday. 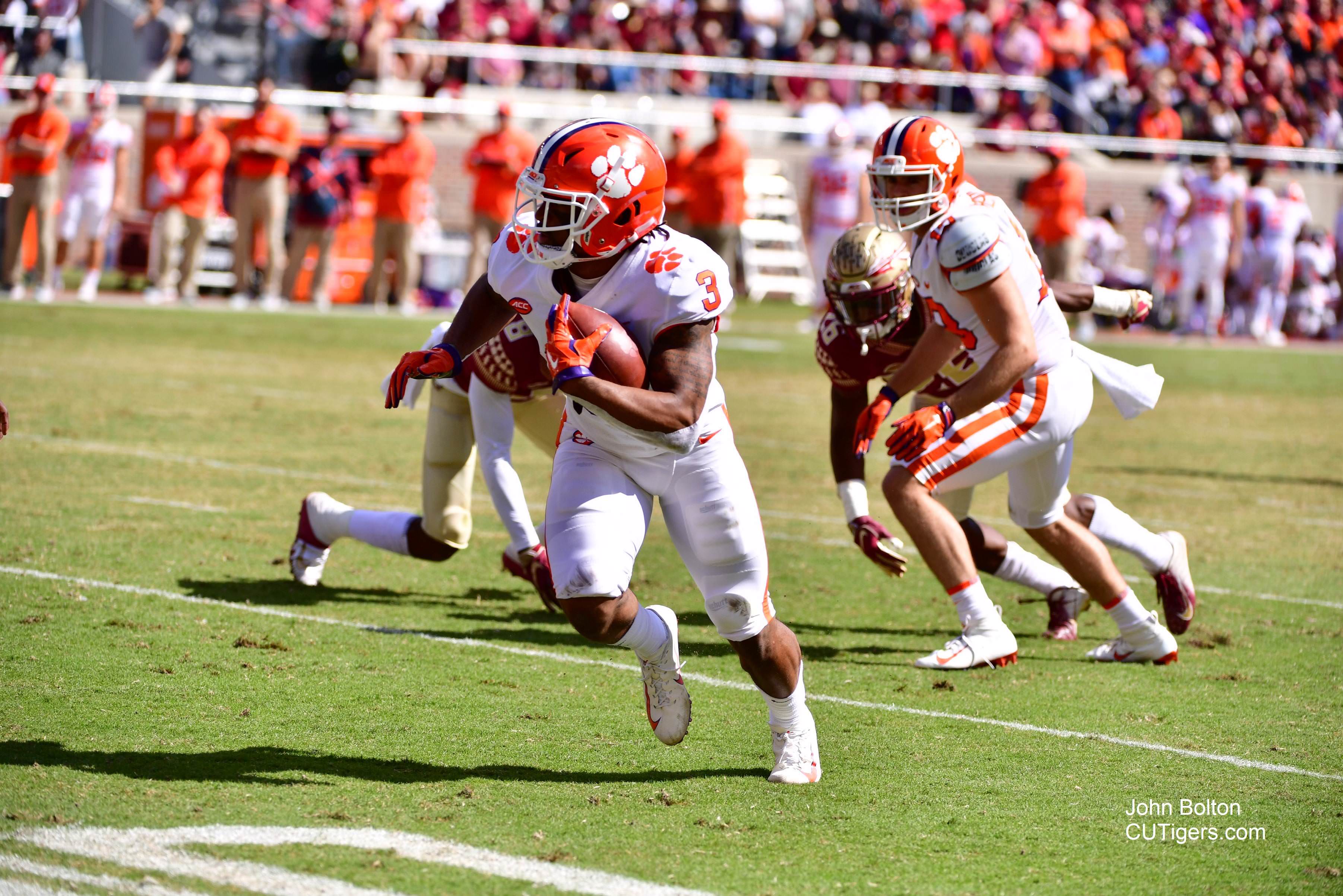 It was a special day for redshirt junior Garrett Williams from Orlando. His father, of course, played for FSU and was involved in the famous punt rooskie play that enabled the Noles to beat the Tigers in Death Valley back in 1988. Dabo named Garrett one of the team captains for the game and called a handoff to the tight end on goal-to-go that went for his first career touchdown! Dabo could have easily called Etienne’s number to give the Heisman candidate his nation-leading 15th touchdown of the season but instead gave Garrett Williams a moment he will never forget! 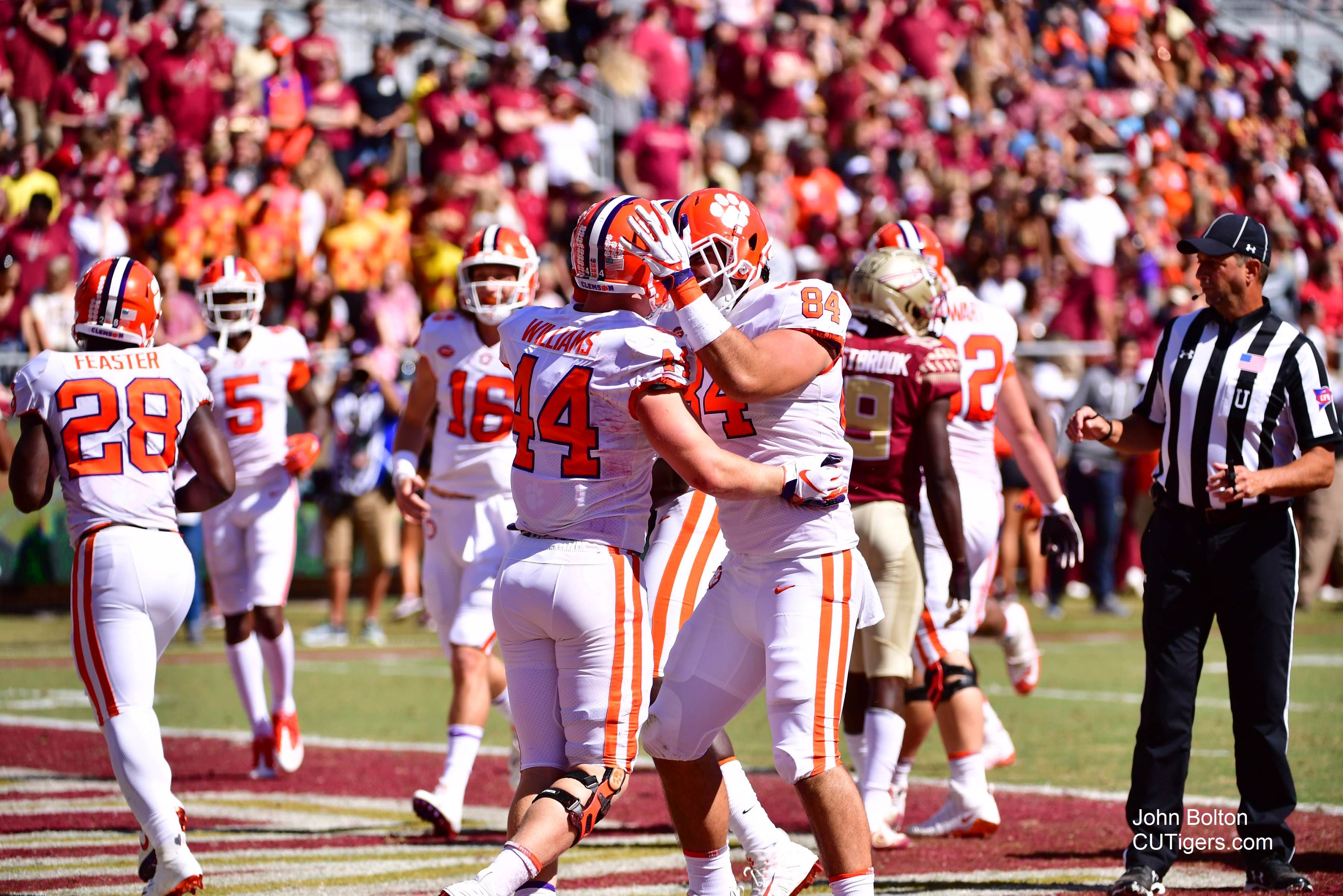 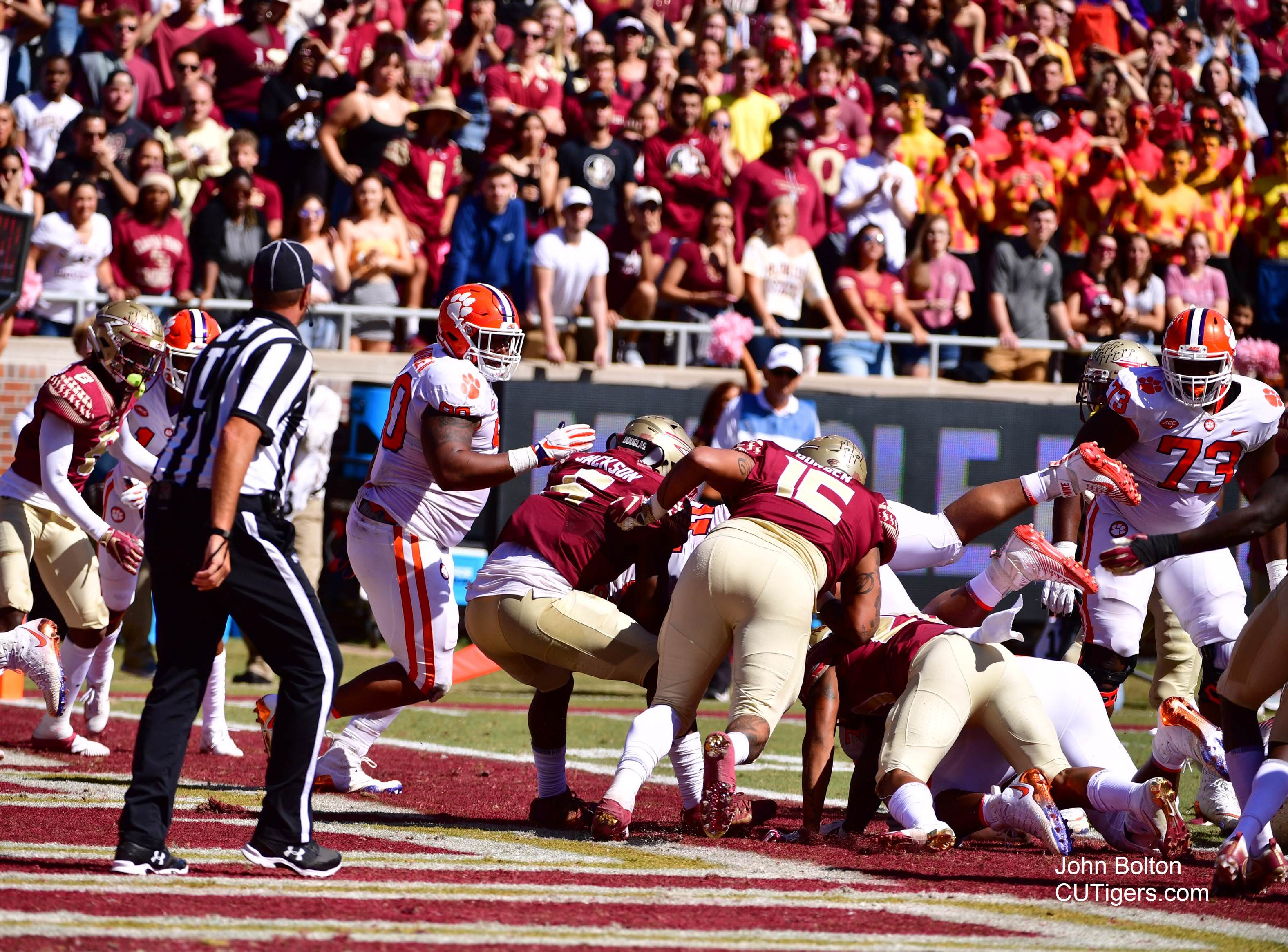 Christian Wilkins also got in the act on offense. On 3rd and goal from the one, the Tigers brought in their jumbo package with Wilkins and Big Dex Lawrence. But instead of using those two as lead blockers, they were lined up in the power I formation! Wilkins took the handoff and barreled into the end zone, ala William “Refrigerator” Perry in the 1986 Super Bowl for the ’85 Bears. It was Christian’s second career touchdown. 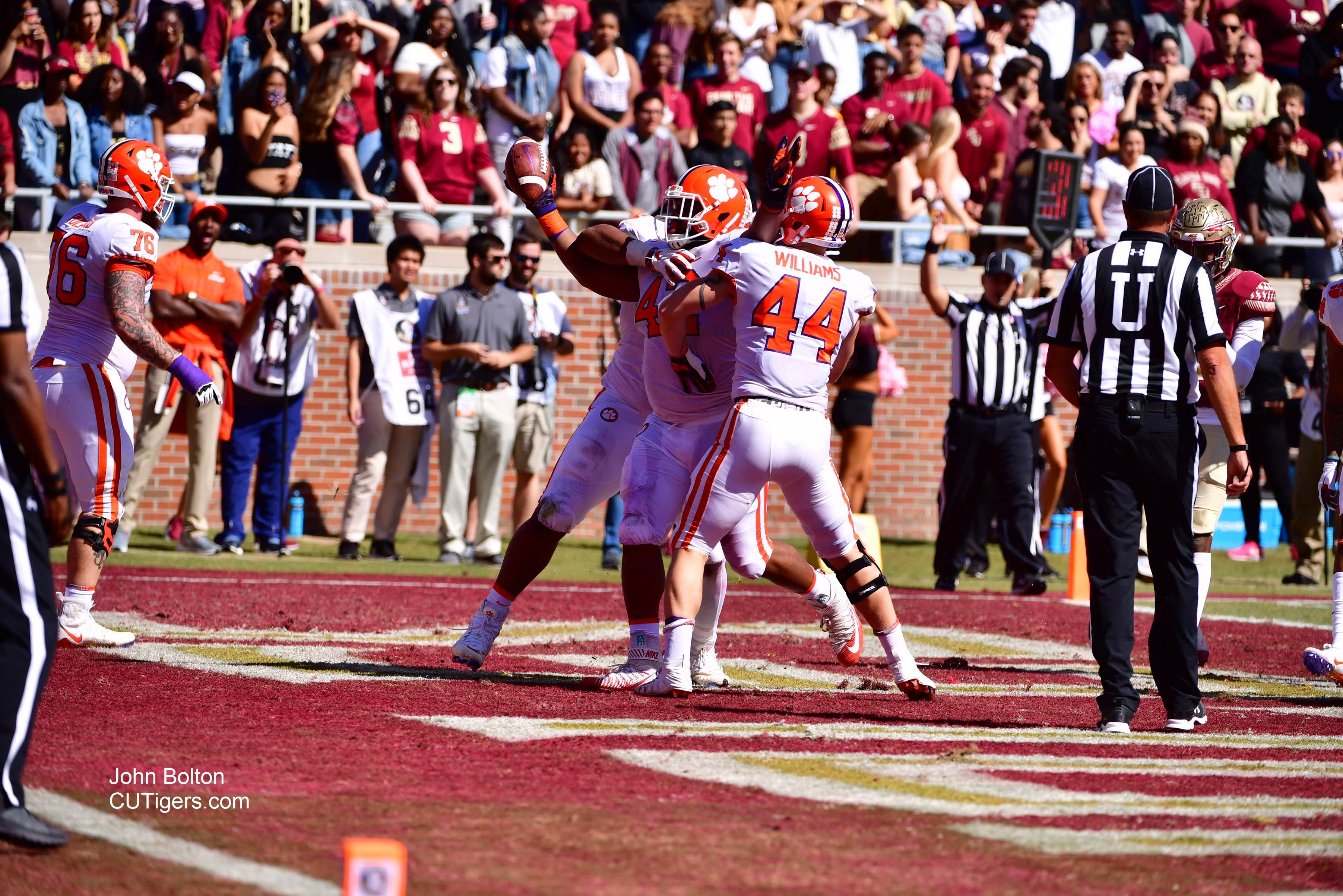 Trevor Lawrence finished the game 20-37 for 314 yards, 4 touchdowns and no interceptions. He broke Deshaun Watson’s Clemson records for yards and touchdown passes by a true freshman. Watson might be growing frustrated with Lawrence coming in behind him and shattering his records. Lawrence broke Watson’s Georgia state high school records for career yards and touchdowns, and now he has done the same at Clemson. Chase Brice also played well, going 4-7 for 90 yards and a touchdown. He led 2 touchdown drives but did have an interception. 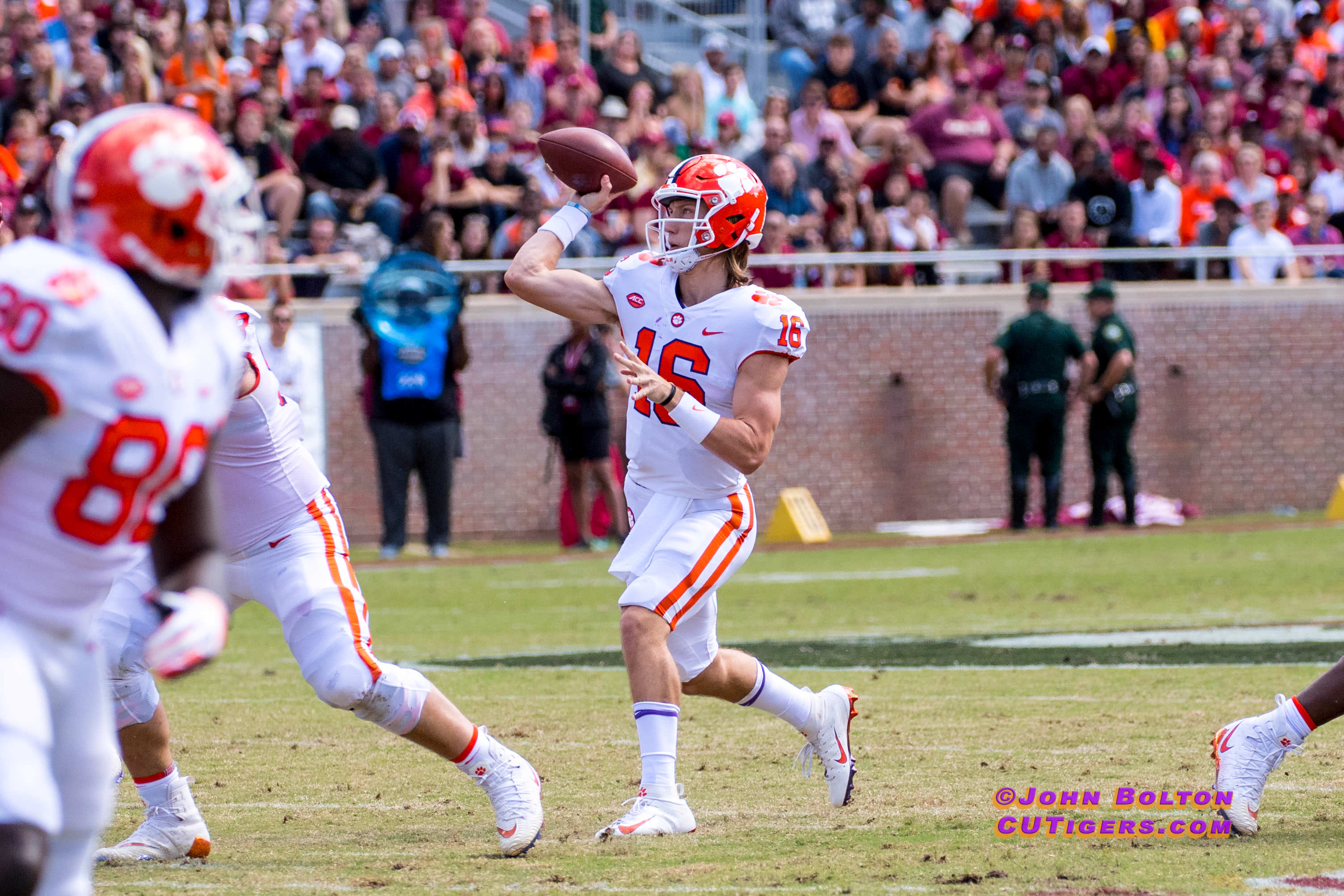 After getting hit on his first field goal attempt, freshman BT Potter came out for the subsequent PAT, but Huegel did return to the game later for a couple PAT’s, and Dabo said after the game that Huegel should be fine. Potter made a 24-yard field goal on his first career attempt.

It was a game for the ages if you’re a fan of the Tigers and further confirmation that Clemson is the undisputed king of the ACC. The Tigers have now handed Miami and FSU their worst losses in history in the last 4 seasons. Clemson is the first team to beat FSU 4 straight years--a huge accomplishment for Christian Wilkins, Hunter Renfrow, Mitch Hyatt and the rest of the seniors. It's also the first time the Tigers have won consecutive games in Tallahassee. On a personal note, I have only been to Tallahasse 3 times: in 2006, 2016 and on Saturday. Those are the only 3 times the Tigers have won there since the 80's! I joke with Dabo that he should have me on the payroll with as much success as they have had since I began covering them in 2015. The Tigers have now won 7 straight games in the state of Florida: FSU (twice), Alabama, Oklahoma (twice), Virginia Tech and Miami. Dabo is 8-0 for the 4th time and 3rd time in the last 4 years. Frank Howard, Danny Ford and Tommy Bowden each accomplished the feat just once. The Tigers’ differential in yards per game allowed and yards gained is 258.7, now #1 in the nation just ahead of Alabama. ESPN has been saying for weeks that Alabama is on a different planet than every other team. Well, the Tigers have put ESPN and the Tide on notice that they are a force to be reckoned with. The first College Football Playoff rankings will be released on Tuesday, and with Alabama idle on Saturday, the Tide will probably be #1 just because of the national perception and the fact that they have been #1 in the polls all season. However, if the committee were to look strictly at the metrics and the fact that the Tigers’ strength of record is better than Alabama’s, they would rank the Tigers #1 in their initial ranking for the 3rd time in the last 4 years.

As usual, I’ll have Dabo’s Sunday evening teleconference for you, so stay tuned!