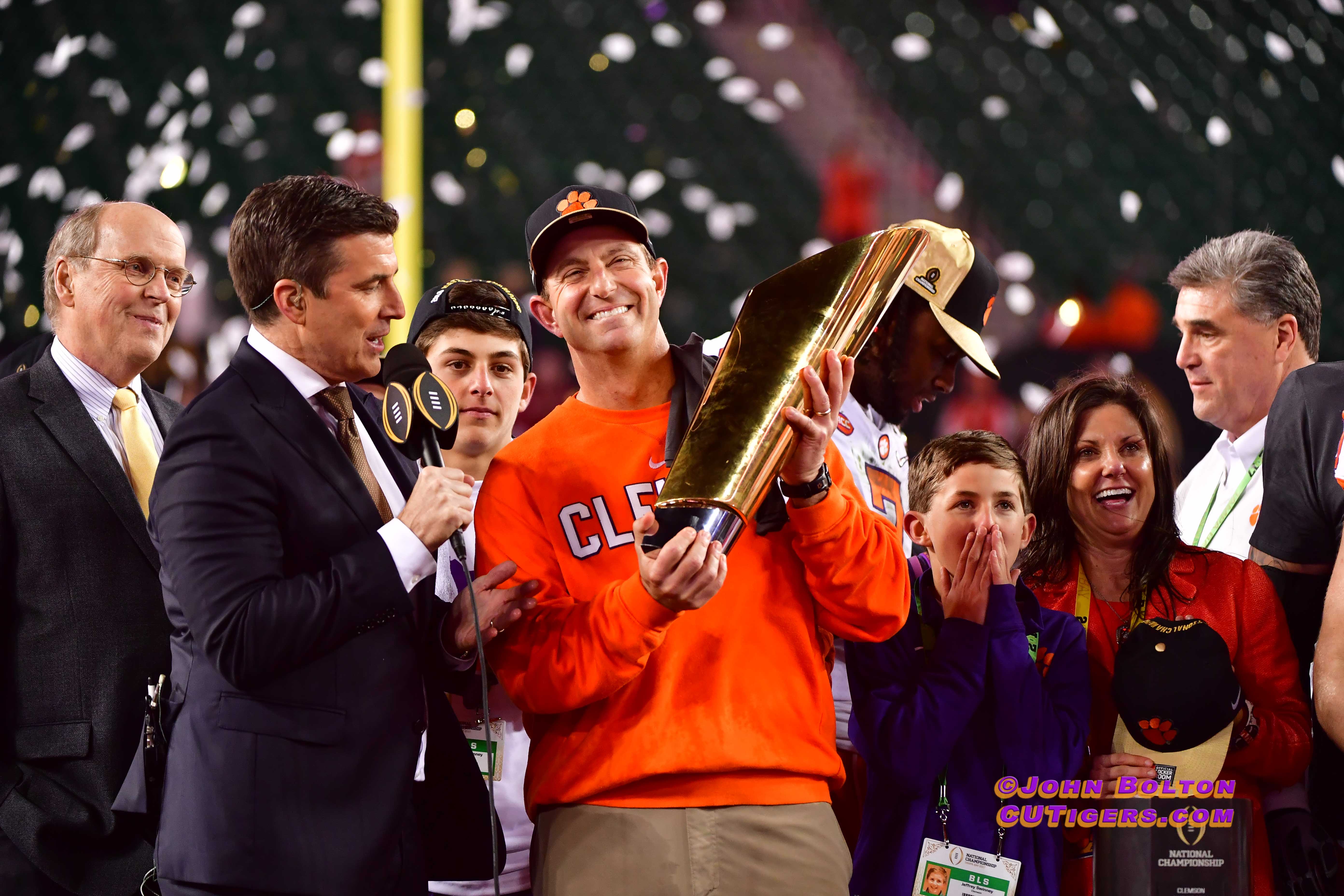 Photo by Trevor Groves CUTigers.com
The Tigers are ranked in the CFP top 4 for the 19th consecutive week since 2015, my first year covering my alma mater. I fully expected the committee to be gutless and rank Alabama #1 based on bias and rhetoric from the entire season, but the data says the Tigers should be #1, and there's really no disputing it. The Tigers' strength of record is better than Bama's, the Tigers have for weeks been the only team in the nation ranked in the top 10 for both total defense and total offense and their differential between yard per game allowed and yards per game gained is #1 in the nation, ahead of Alabama. Clemson is #1 in scoring defense and #6 in scoring offense. Again, the only team ranked in the top 6 for both. Bama is #16 in total defense, behind Fresno State. Clemson is #3 in total defense. The Tigers' opponents so far are 38-16 against all over teams, compared to 29-28 for Alabama opponents, which is why the Tigers' strength of record is so much better. So the Tigers' statistics are all better than Bama's despite playing better competition. Not to mention that Trevor Lawrence only played half the games for the first half of the season. If he had started the whole season, the metrics would be even more in favor of Clemson over Alabama. In the 3 games Trevor has started and not been injured, the Tigers have outscored their opponents 163-20. There is really no excuse for Alabama to be #1 other than "they're Alabama," which is not what the committee is charged with using as a criteria. But again, I would have been surprised if the committee has the guts to upset the apple cart--especially with some new faces and a new Chairman, Rob Mullens.
I  was on the CFP conference call with new Chairman Rob Mullens at 7:45 ET, just after his appearance on ESPN with Rece Davis. I was able to ask him the first question and asked him why exactly Alabama was ranked #1 ahead of Clemson, despite the fact that Clemson is the only team in the top 10 for total offense and total defense, the Tigers' opponents are 38-16 vs 29-28 for Alabama and the Tigers have the #1 differential in yards gained vs yards allowed. Furthermore, the Tigers have THREE wins against teams in their top 25, whereas Alabama has just one, and that was at home against the A&M team that the Tigers beat on the road, at night in front of an ESPN Gameday crowd of 105,000! According to their own criteria, Clemson should be #1. The chairman's response was very watered down, but at least I got it on the record. Personally, I think the committee just went blindly by the polls without really looking at the data and moved on to more pressing debates, even though they're not supposed to use the polls at all.
Of course, none of this will matter in the long run if the Tigers win all their games and win the National Championship. Everyone will know how wrong they were then. But I just like to see credit given where it is due, and Clemson is clearly the #1 team in the nation right now despite what ESPN has been saying for weeks. What you can surmise from last night's rankings is this: if Clemson and Alabama both win out, Alabama will be #1 no matter what the metrics say. And maybe by then they'll deserve it, having beaten LSU, Mississippi State, Auburn and Georgia or Kentucky. They just don't deserve it now. The Tigers' could have the opportunity to beat a 4th ranked team--and 2nd on the road--when they travel to Boston College in a couple weeks, and they could also play another ranked team in the ACC Championship Game. However, Alabama would still get the nod over Clemson if they did last night when the strength of record and everything else was clearly in favor of the Tigers. By the way, the one reason being #1 would matter significantly is that the #1 team gets to pick its location for the Semifinal. However, in this case that seems to be a moot point because Alabama is closer to Arlington than Miami and has played there a couple times in recent years. So the Tigers will likely be Miami bound, whether they are #1, #2 or #3 in the final CFP Rankings.
The audio and transcript from our teleconference with Mullens is below. 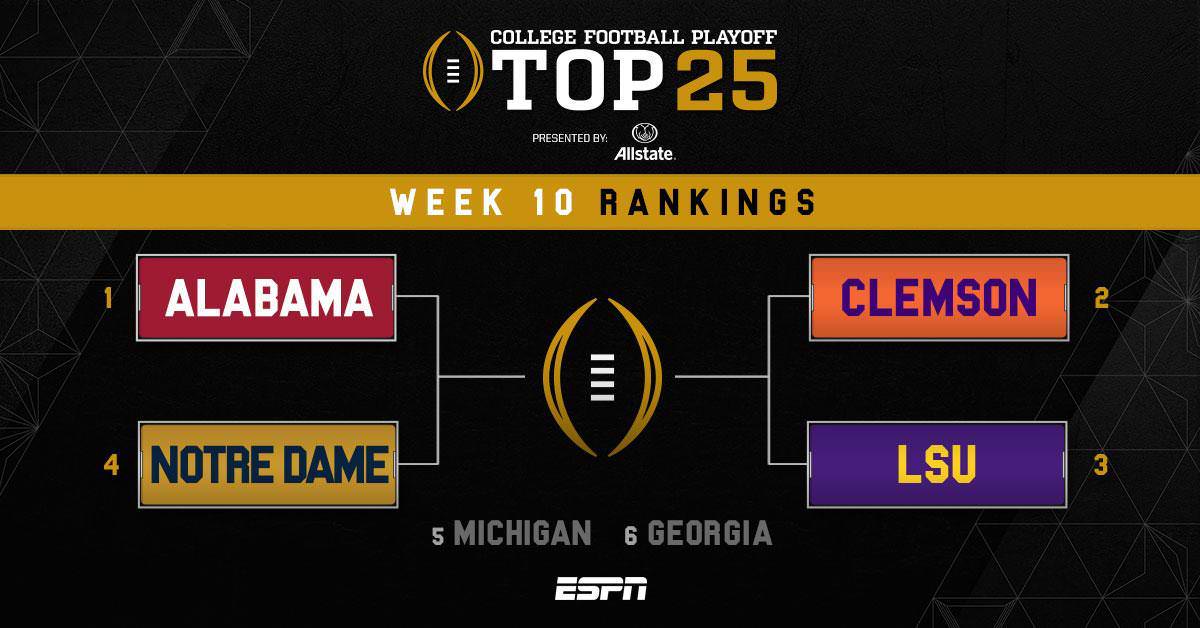 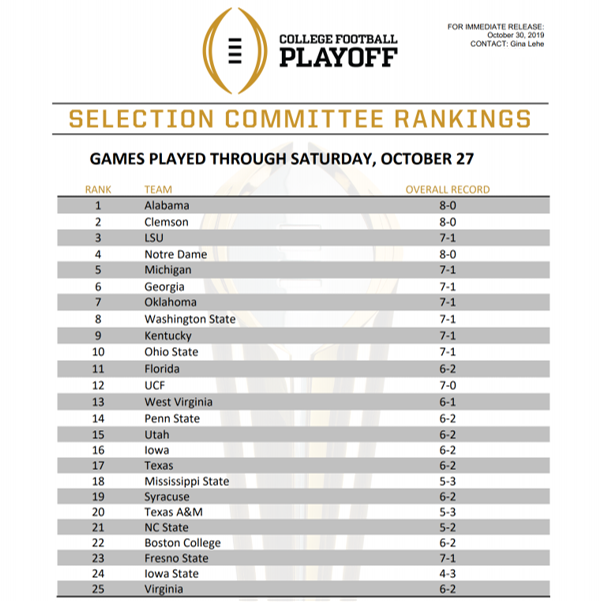