The name “Power Rangers” has a different connotation to it in Clemson, South Carolina and in the College Football lexicon. Four of the most well-known defensive linemen in the country could be referred to by school, by name or even by rankings, but they would rather be referred to by their self-proclaimed alter egos: “The Power Rangers.” These four linemen are Christian Wilkins, Clelin Ferrell, Austin Bryant and Dexter Lawrence. Prior to the 2018 season, these four combined for a total of 49.5 sacks, 87.5 tackles-for-loss, 21 pass breakups and 42 quarterback rushes, helping make Clemson the unanimous #2 in the preseason polls for 2018, just like the 2016 season when the Tigers won the National Championship. Three of the four Power Rangers—Ferrell, Bryant and Wilkins—chose to remain at Clemson to play football for one more year, spurning the NFL Draft and potentially millions of dollars. The four linemen have a deliberate reason calling themselves the Power Rangers. Wilkins, the patriarch of the group, says in complete seriousness, “We’re tough. We never give up. We fight the forces of evil.” 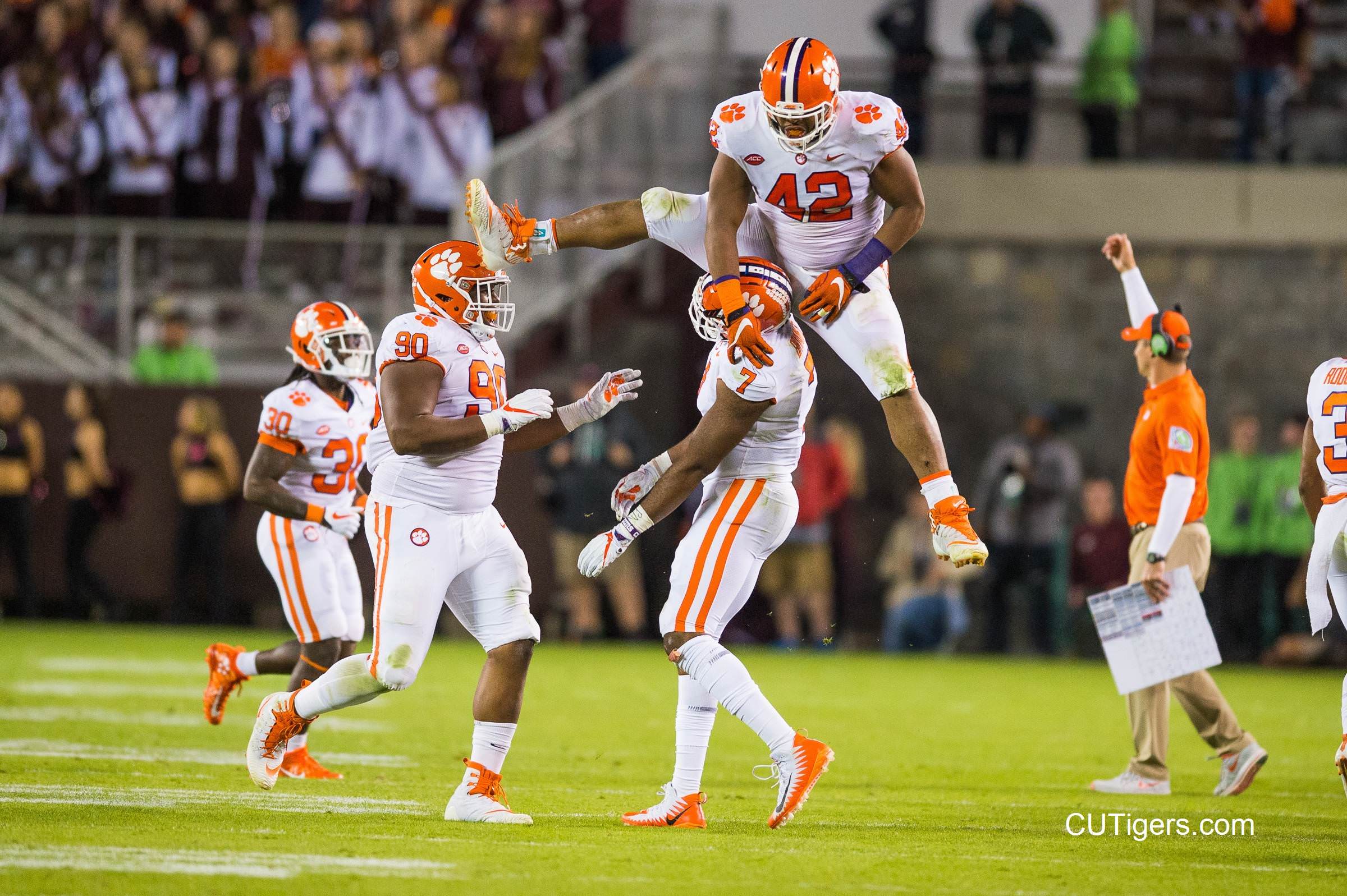 All-American DE Christian Wilkins is the first and original Power Ranger. When asked why he chose to stay in Clemson for one more year, Wilkins said, “I’m a gut-feeling kind of guy. When my gut tells me to do something, I do it, and my gut was telling me there’s more I need to accomplish here at Clemson.” At 6’4” and 314 pounds, Christian Wilkins not only plays on the defensive line, but occasionally on the other side of the ball as well. In the Tigers’ game at Florida State last weekend, Wilkins even scored a touchdown at running back out of the I formation, behind lead blocker and fellow Ranger Dexter Lawrence. It was the second career touchdown for Wilkins—he caught a TD pass in 2016—and, as a freshman, he caught a long pass on a fake punt against Oklahoma in the 2015 Orange Bowl at a critical point in the CFP Semifinal. Wilkins even saw one play at safety in the Orange & White game last spring! It’s often difficult to tell when Wilkins is being serious or silly because of his fun-loving charisma, but he has let us know how determined he is about getting some snaps in at quarterback and other positions lately. Just this past week, a depth chart was found floating around on the floor of Clemson’s practice facility. On the depth chart, the names for the starting TE, WR’s, RB, FS, CB, PK, P, KO, KOR, and both QB’s were redacted with Wilkins’s name written in. Even though he has only gotten to play a few of those positions so far, Wilkins has outdone himself in his career at Clemson so far. In 52 games as a Tiger to date, Wilkins has had 213 tackles, 29 tackles-for-loss, 43 QB pressures, 14 pass breakups, 12 sacks, 3 fumbles recovered, 2 forced fumbles and 1 interception. Wilkins said, “I wanted to put an exclamation point on my career and make sure that I’m leaving Clemson way better than I found it,” and he has made sure to live up to his words. In fact, on Halloween of all days, the White Power Ranger was named one of just 13 finalists for the Campbell Trophy and was named to the National Football Foundation National Scholar-Athlete Class. He is just the fourth Clemson recipient of the honor, which requires players to be in their final year of football eligibility for candidacy. So Wilkins already has one very tangible reward for his decision to postpone the NFL. 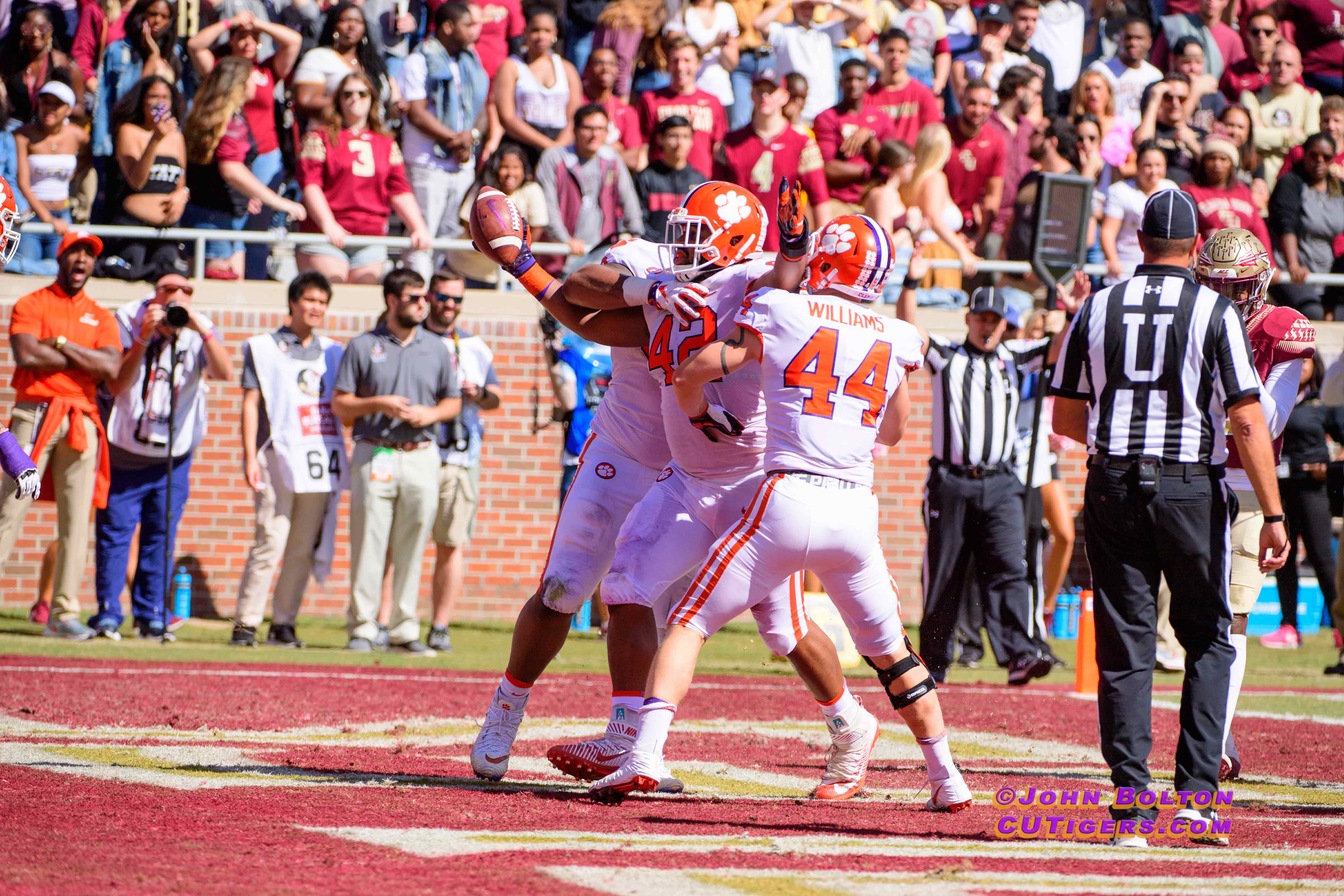 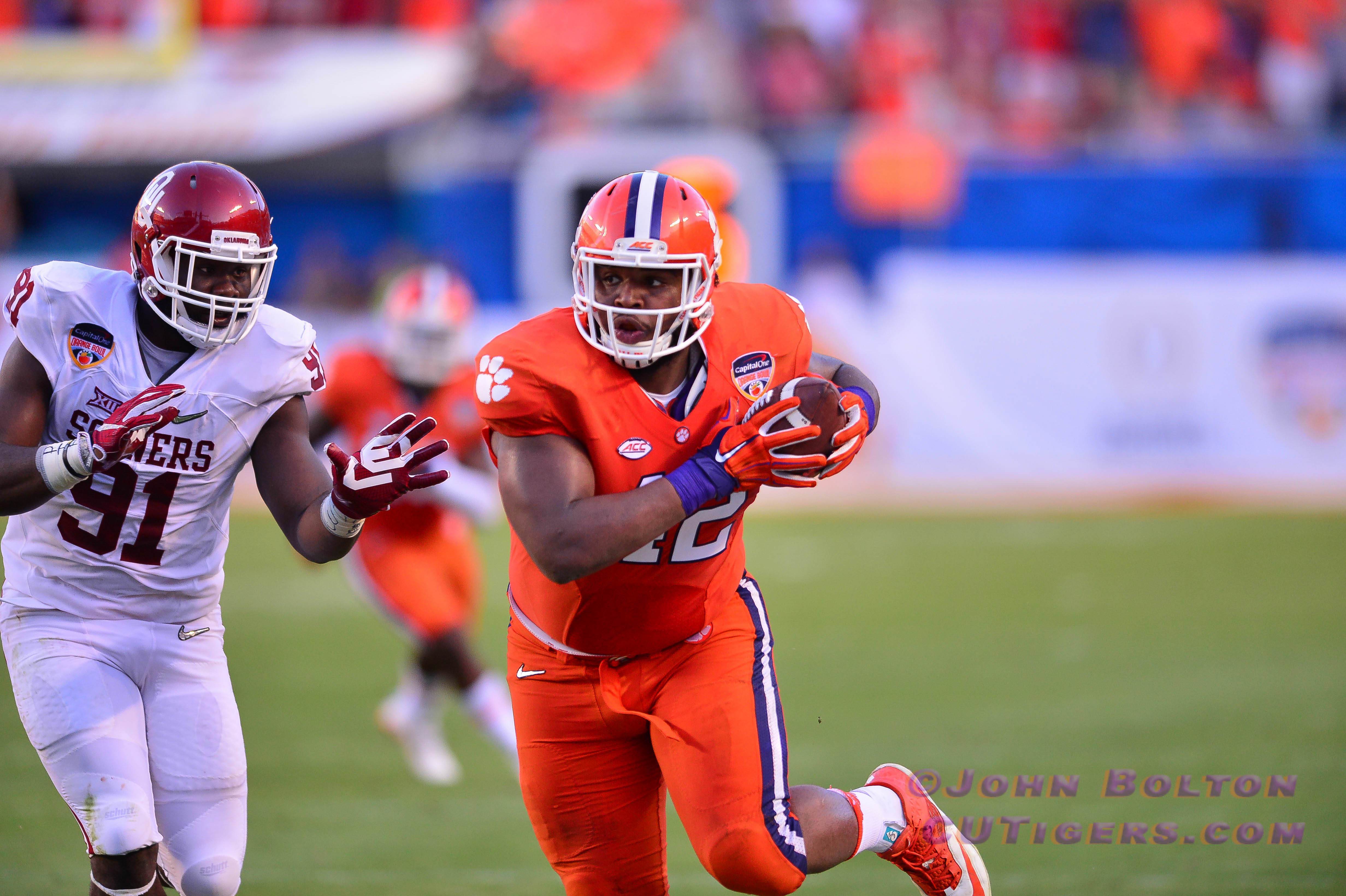 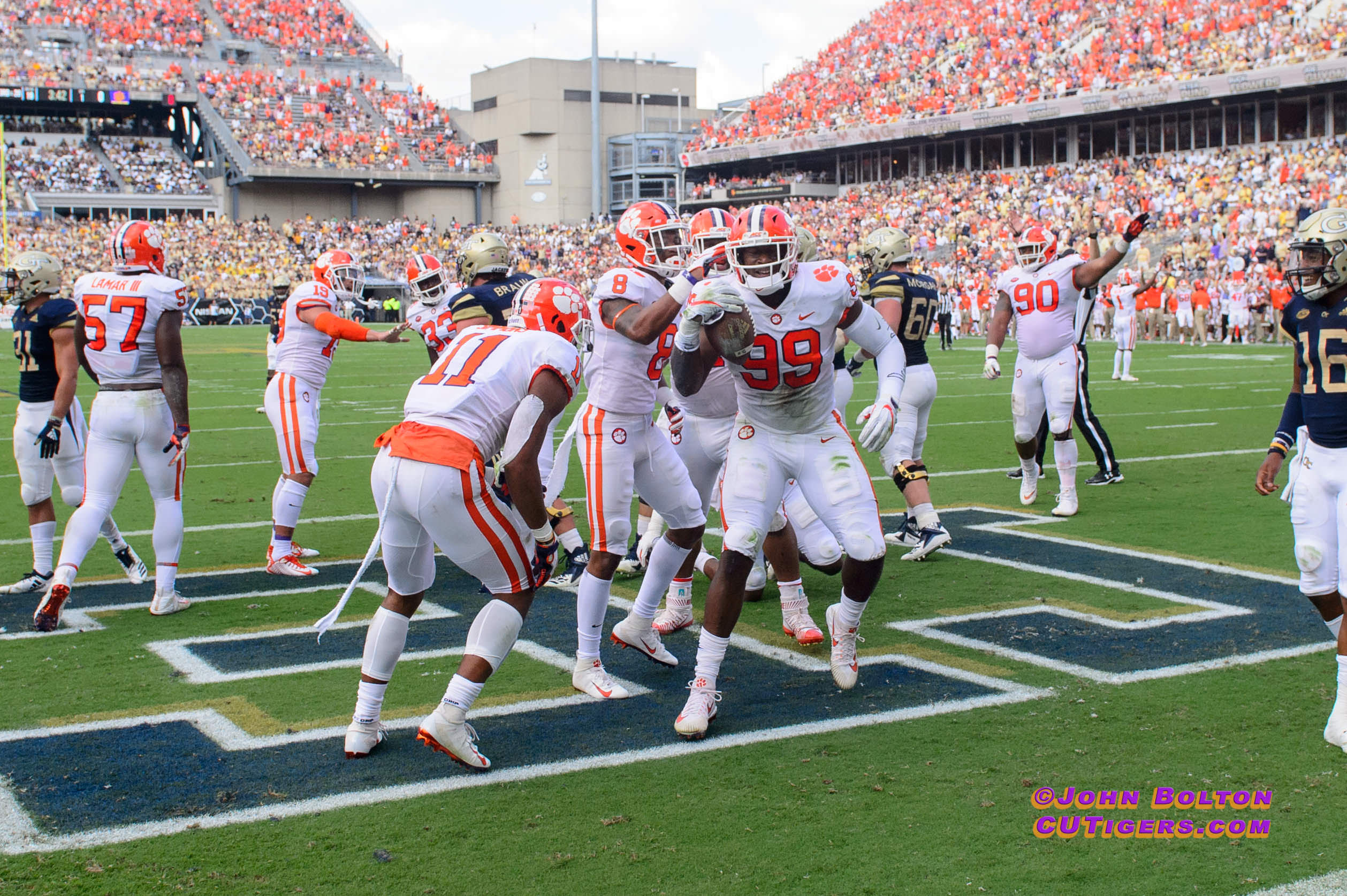 The second Power Ranger is Clelin Ferrell. The 6’4”, 265-pound lineman has irrefutably made a profound impact on Clemson Football since he has been on campus. In his 37-game career as a Clemson Tiger, the redshirt junior has recorded 134 tackles, 38.5 tackles-for-loss, 36 QB pressures, 3 pass breakups, 21.5 sacks and 2 forced fumbles. Ferrell never even had plans to play football in college because he intended to join the military after graduating from his military-Catholic high school. Now he is one of college football’s most note-worthy defensive linemen. When Clemson offered Ferrell in his sophomore year, he fell in love with Clemson’s program, coaches and atmosphere. When asked why he chose to return to Clemson for one more year rather than declaring for the NFL Draft, Ferrell said, “When I came to Clemson, I wanted to be one of the best players to come through here. That’s really the strongest reason why I came back.” Ferrell is tied for 8th in the Power Five with 7 sacks this season, and he has the third-most career sacks for an active player. It’s safe to say that he will be known as one of the best players to ever come through Clemson, just like he wanted.

The third Power Ranger is 6’6”, 280-pound Austin Bryant. When asked why he chose to stay at Clemson for one more year, Bryant said, “I can leave a legacy in a place like this.“ In 44 games as a Tiger, the senior has recorded 124 tackles, 20.5 tackles-for-loss, 20 QB pressures, 15 sacks and 1 fumble recovered. As the season goes on, Bryant keeps adding on to the legacy he has earned for himself at Clemson. Coming from the small town of Pavo, Georgia, Bryant was used to a homegrown relationship with his town. He was related to almost everyone there, and that’s where he learned one of the most important principles in life: family. He felt that family vibe as soon as he stepped foot in Clemson, and that’s what appealed to him the most throughout the recruiting process. Despite all of the relationships he’s made here at Clemson, the most important one he’ll take with him is the family he gained through the other three Power Rangers. When talking about his defensive line mates beside him on the field, Bryant said, “We’ve bonded like no other, and that’s something really special… No matter whether it’s football or life, they’ll be there for me.” 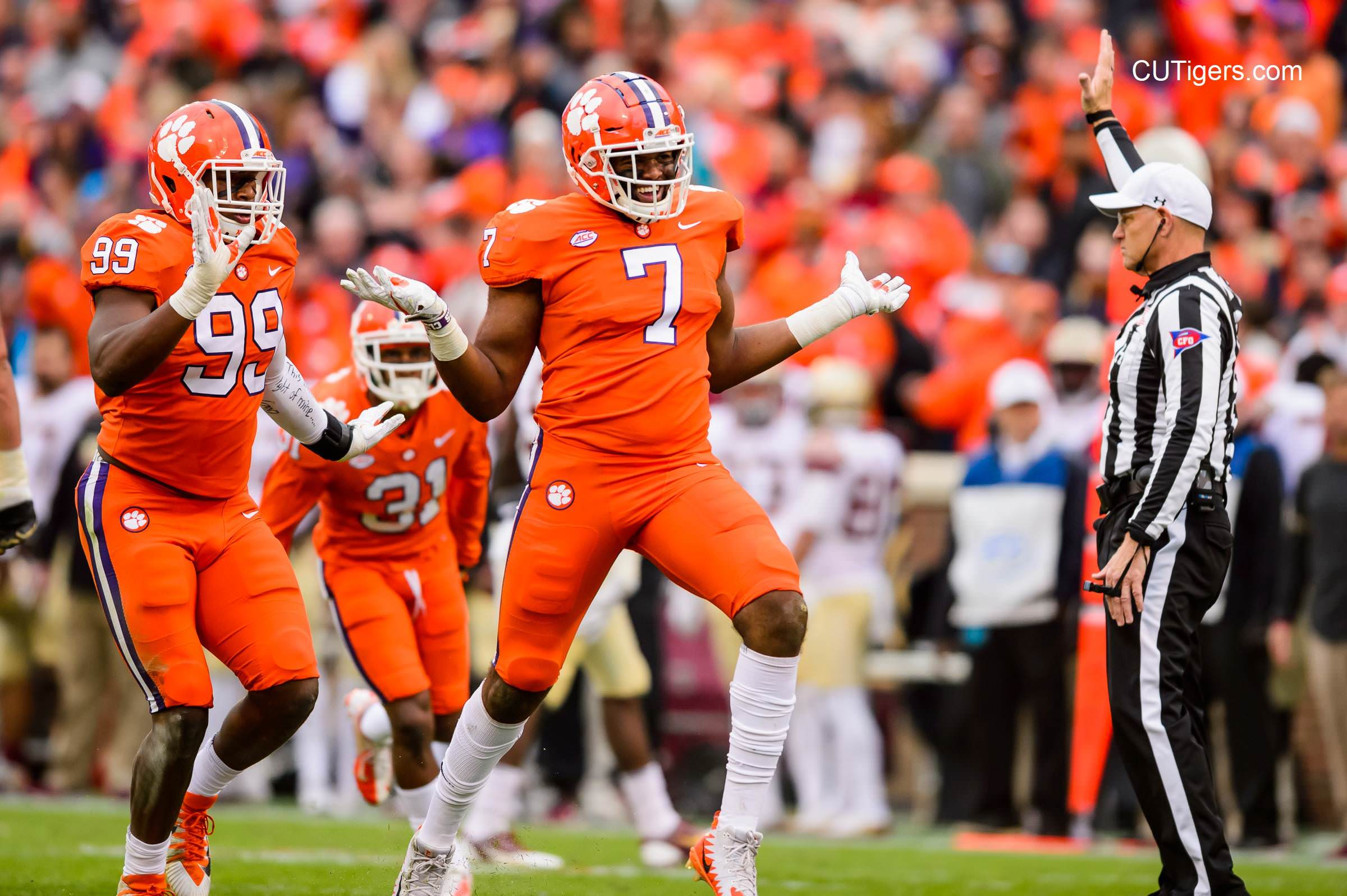 The last—but certainly not least—Power Ranger is Dexter Lawrence, who, as the youngest of the group, was naturally assigned the pink uniform. Although he’s the youngest of the Power Rangers, he is notably the biggest, at 6’4” and 350 pounds. Like his teammate Christian, Big Dex would also like to play on the other side of the ball at running back, since he started his youth football career as one. Although he hasn’t been given the opportunity to take a handoff yet, Lawrence has made his mark as a defensive lineman. In 35 games, the true junior has recorded 136 tackles, 14 tackles for a loss, 28 QB pressures, 9.5 sacks, 2 pass breakups, 2 fumbles recovered and 1 forced fumble. Lawrence said that he was never promised playing time or a guaranteed starting spot at Clemson. All Lawrence ever wanted was an opportunity, and he has made sure to take advantage of every single one given to him since becoming a Tiger. He has even been involved in a few scoring plays, as a blocker in the Tigers’ “jumbo package.” He lined up in front of Wilkins in the I formation on the aforementioned touchdown in Tallahassee last week. What ultimately made Lawrence choose Clemson was how nice and genuine the people, players and coaches were. Since making the decision to wear Orange and Purple, Lawrence says he has “grown socially and spiritually.” He gives much of this credit to his coaches, but most of it he owes to the selflessness of the other three defensive linemen alongside of him. When asked about his relationship with the other three Power Rangers, Lawrence said, “They’re my best friends…We all genuinely care for each other…It’s real.”

The four Clemson D-Linemen have lived up to their expectations and have made a legacy at Clemson that will be hard to replace. One of the main reasons the three NFL-eligible self-made superheroes decided to return to Clemson was due to the grades they received from the NFL. They knew there was more to be done at Clemson in order to get a higher grade, so they made the decision to come back and go out with a bang, in the hopes of improving their draft stock and brining another National Championship Trophy to Clemson along the way.  They also ultimately did not want to leave their fourth and youngest Power Ranger, Lawrence, behind by himself.  As sad as it will be to let them go, we cannot wait to see the first-ever Power Rangers in the NFL. Despite the high probability of them playing for different teams and wearing different colors for the first time in years, they will always be White, Green, Red and Pink underneath and maintain a close relationship. Christian Wilkins wants one thing known to everyone: “Those are my brothers for life.”

So if you’re near the Clemson campus on this All Hallows Eve, be on the lookout because you might just encounter the super heroes of college football in full Morphin regalia! 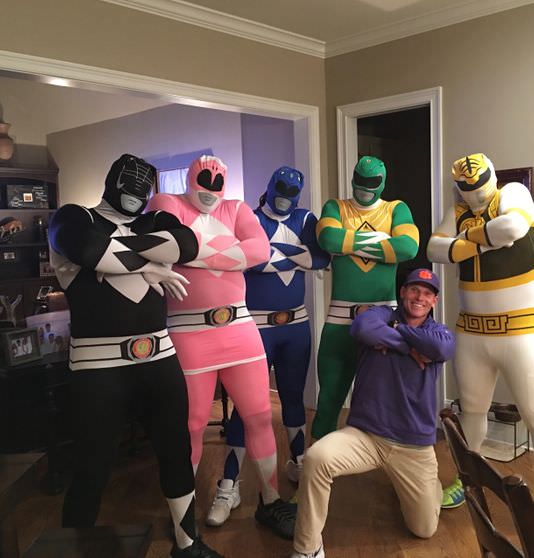 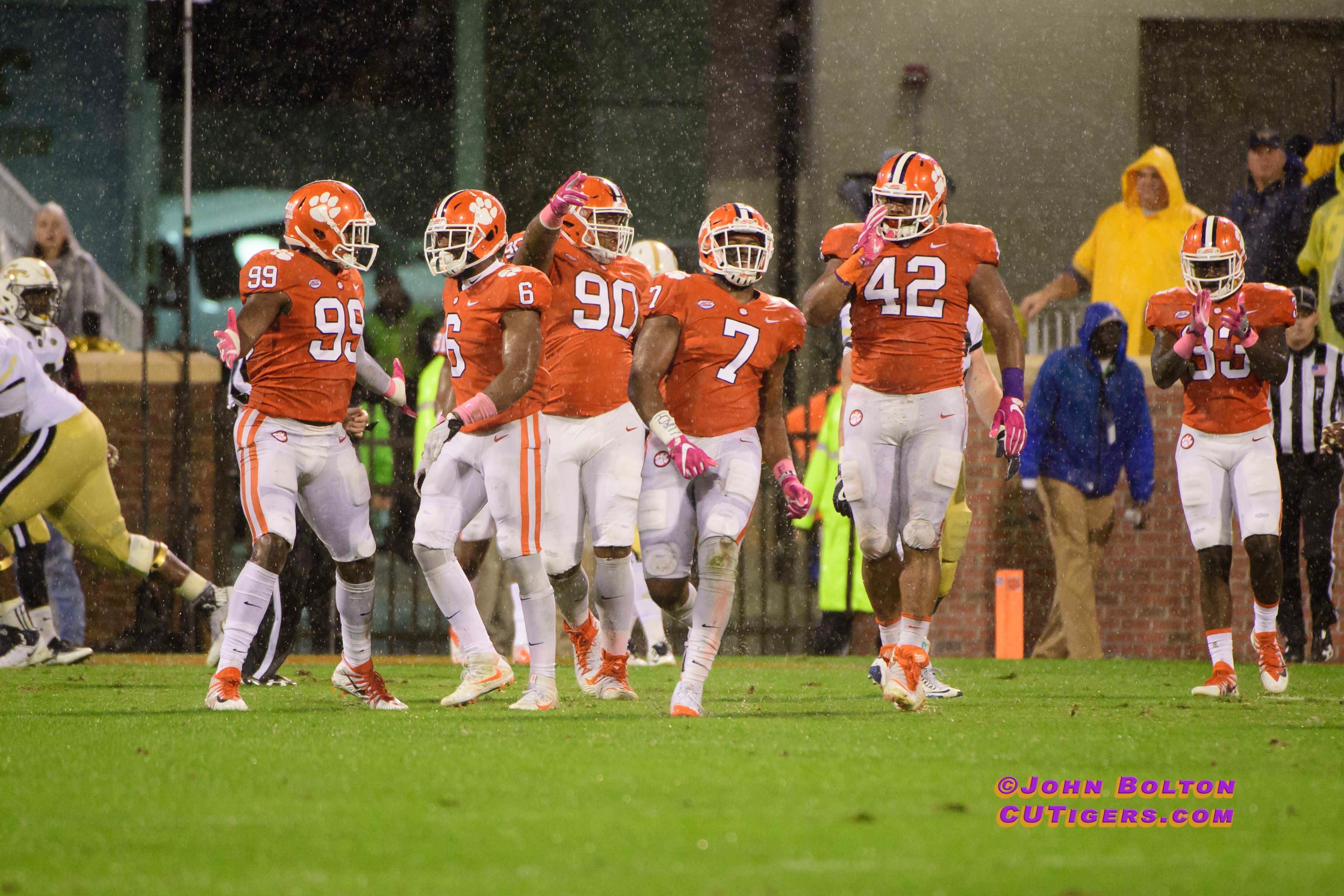