ELI THOMAS RETURNS, NO.22 CLEMSON HANGS 100 ON THE CITADEL IN SEASON OPENER

Photo by John Bolton CUTigers.com
BOX SCORE
CLEMSON, SC - Brad Brownell picked up his 150th win with the Tigers, as the No.22 Clemson scored 100 points for the first time in his tenure and the first time since 2009. The Tigers' defense still isn't where Brownell would like it to be, giving up 40 per half on Tuesday night and 80 points for the second straight game, but he said The Citadel is a tough team to defend because of their style of play. 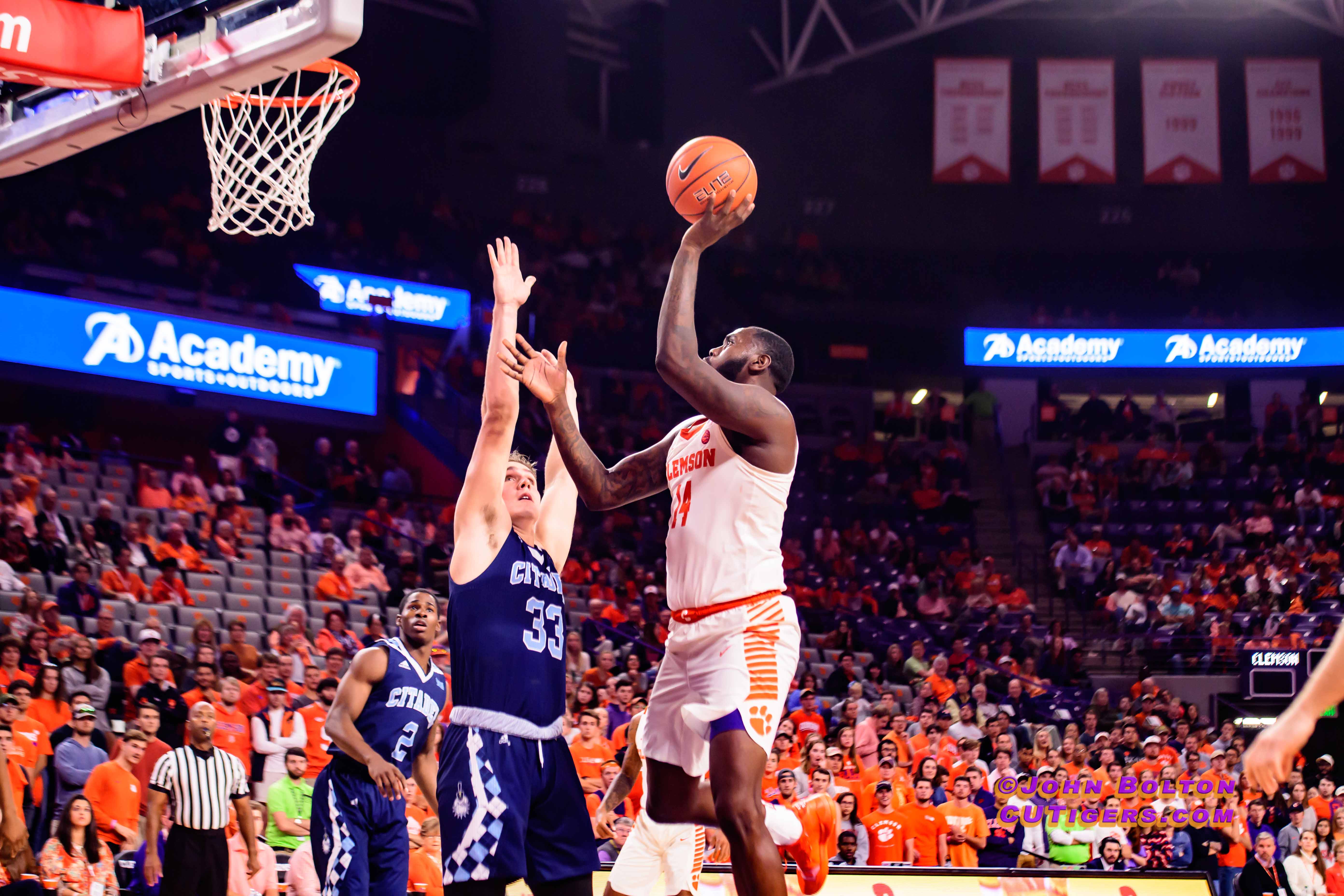 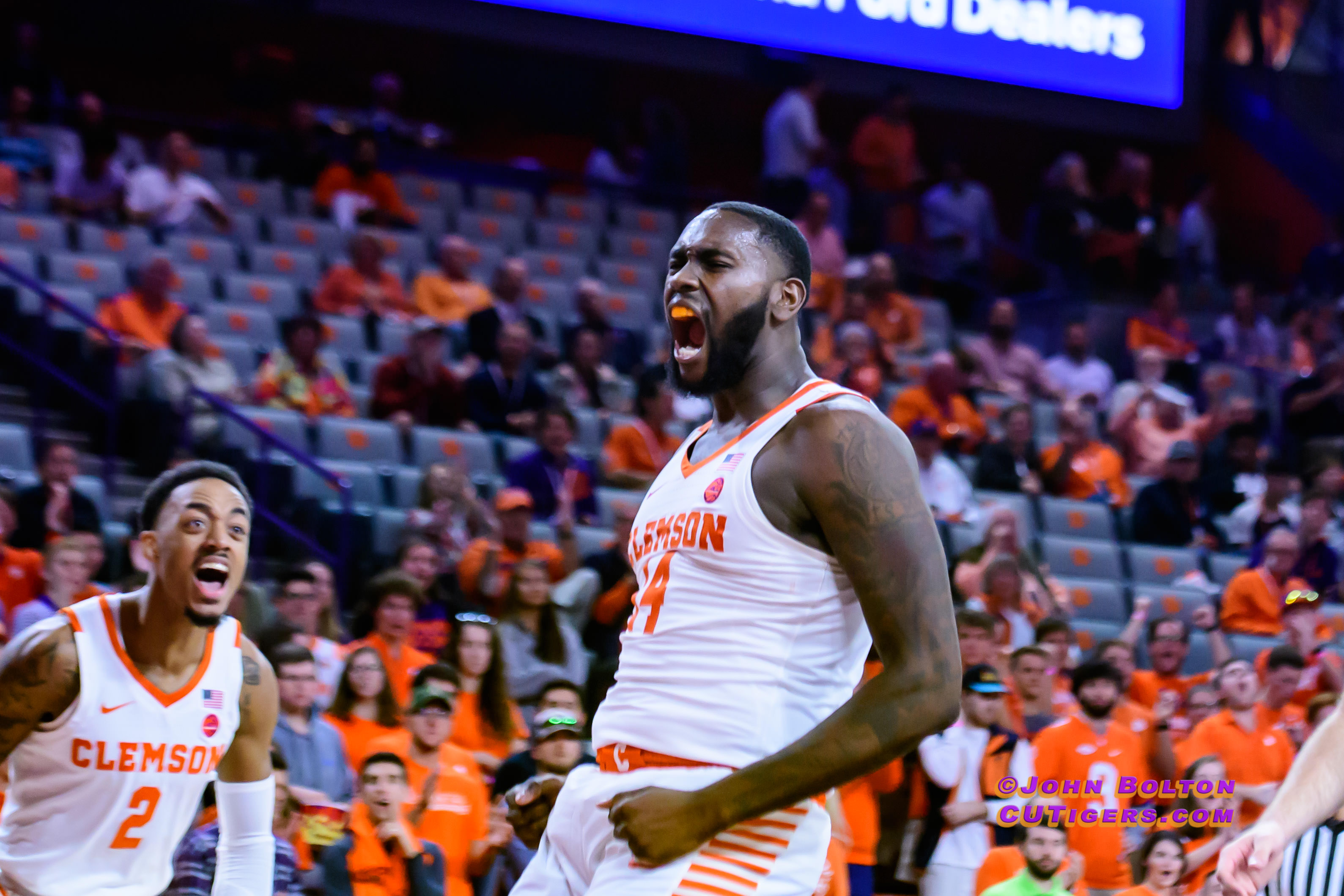 Starting center Eli Thomas was a game-time decision after missing nearly two weeks of practice with an ankle injury, but he was able to make the start and had an impressive season debut, scoring 15 points with 9 rebounds in just 24 minutes. Thomas won the opening tip and scored a layup on the first possession of the game. 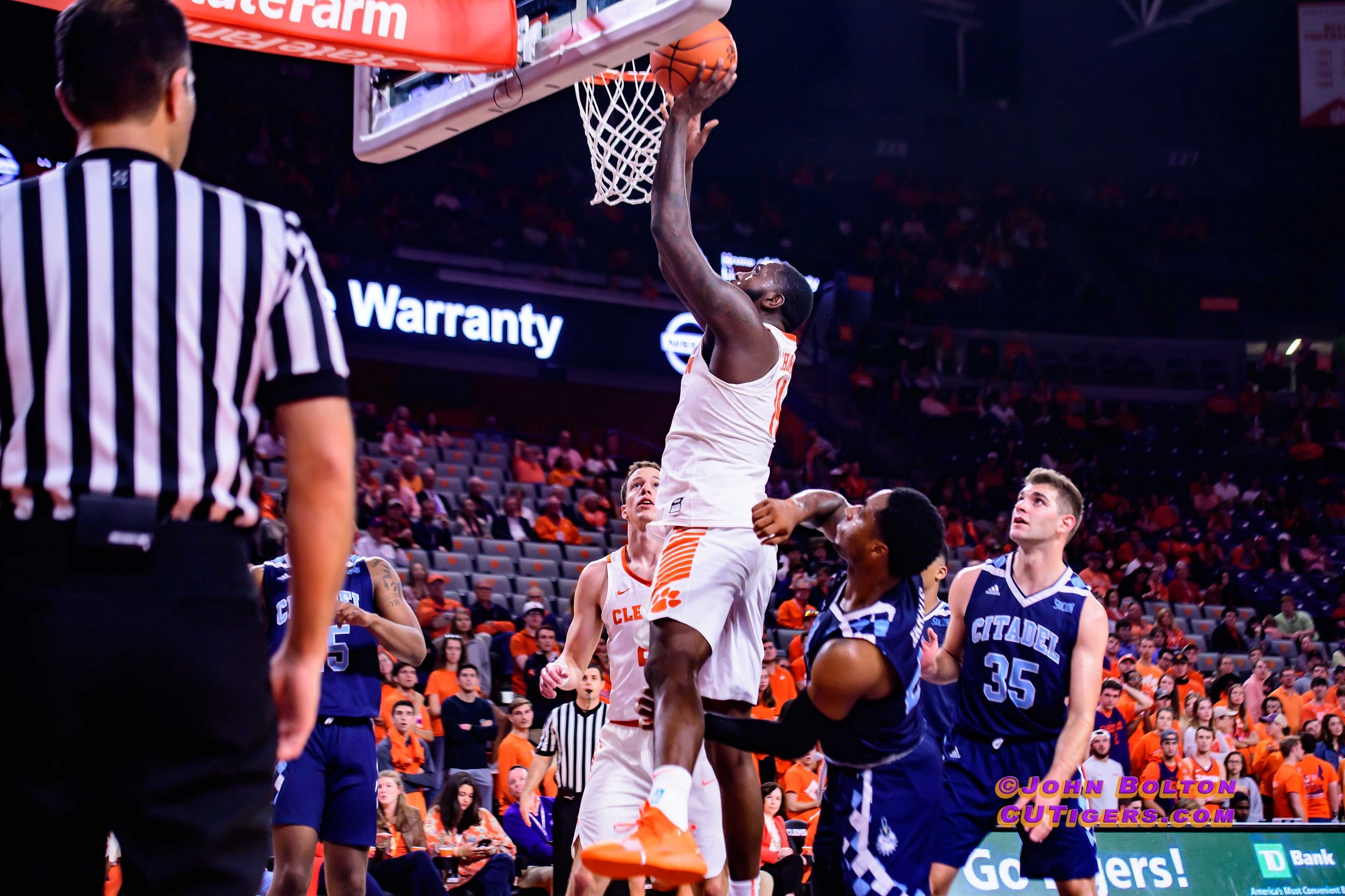 Marcquise Reed led the Tigers in scoring with 20 points after a 29-point performance in the Tigers' exhibition game on Thursday night. His partner in the back court, Shelton Mitchell, scored 16 and was 4-7 from the arc. Aamir Simms had probably his best game, scoring 16 points on 7-8 from the field and 2-2 beyond the arc! David Skara continued his good shooting, going 4-7 from the field with a 3-pointer for 11 points. Clyde Trapp also played his best game as a Tiger, scoring 13 points. Freshman guard John Newman played 18 minutes after starting on Thursday night and scored 5 points with a 3-pointer, going 2-3 from the field. 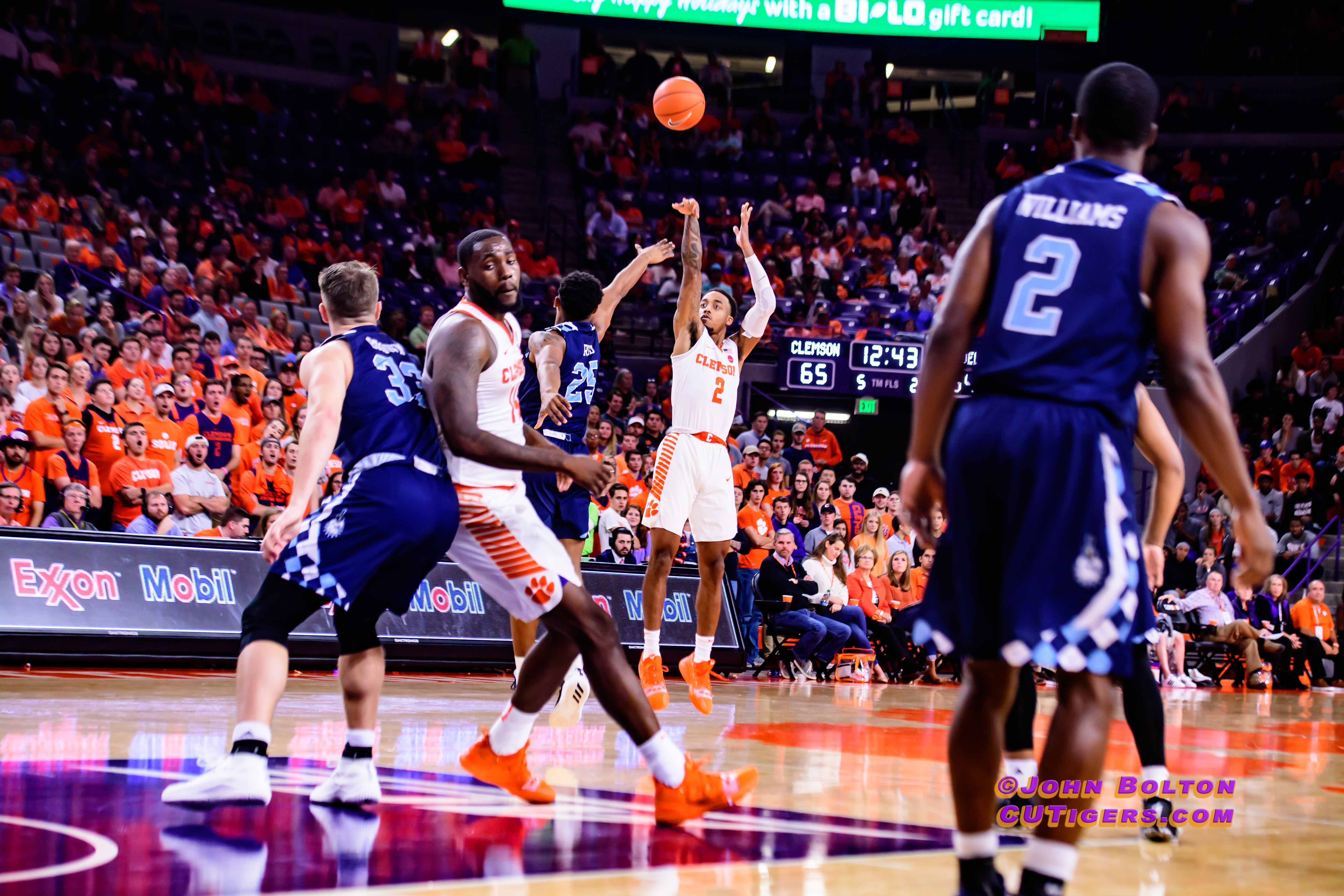 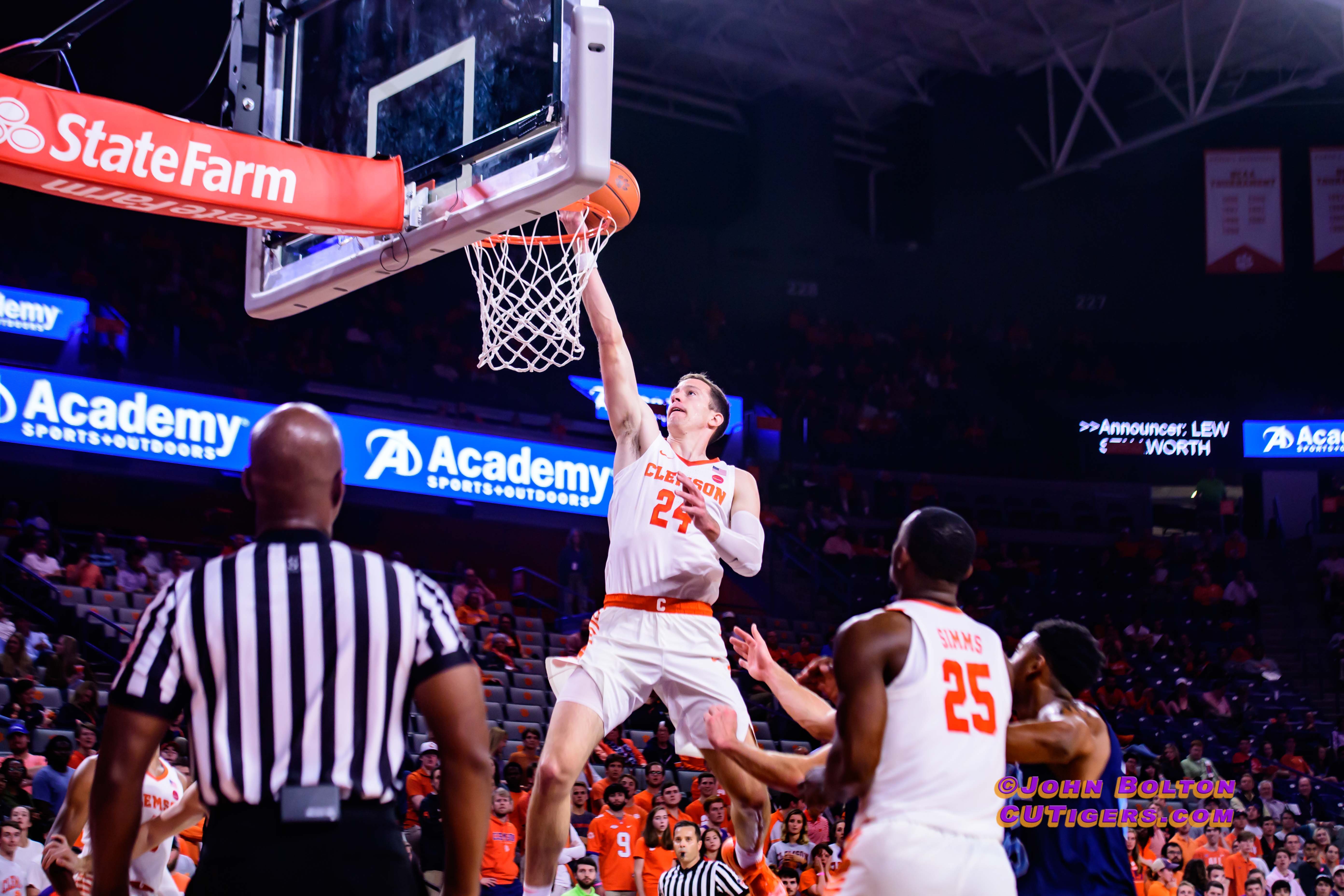 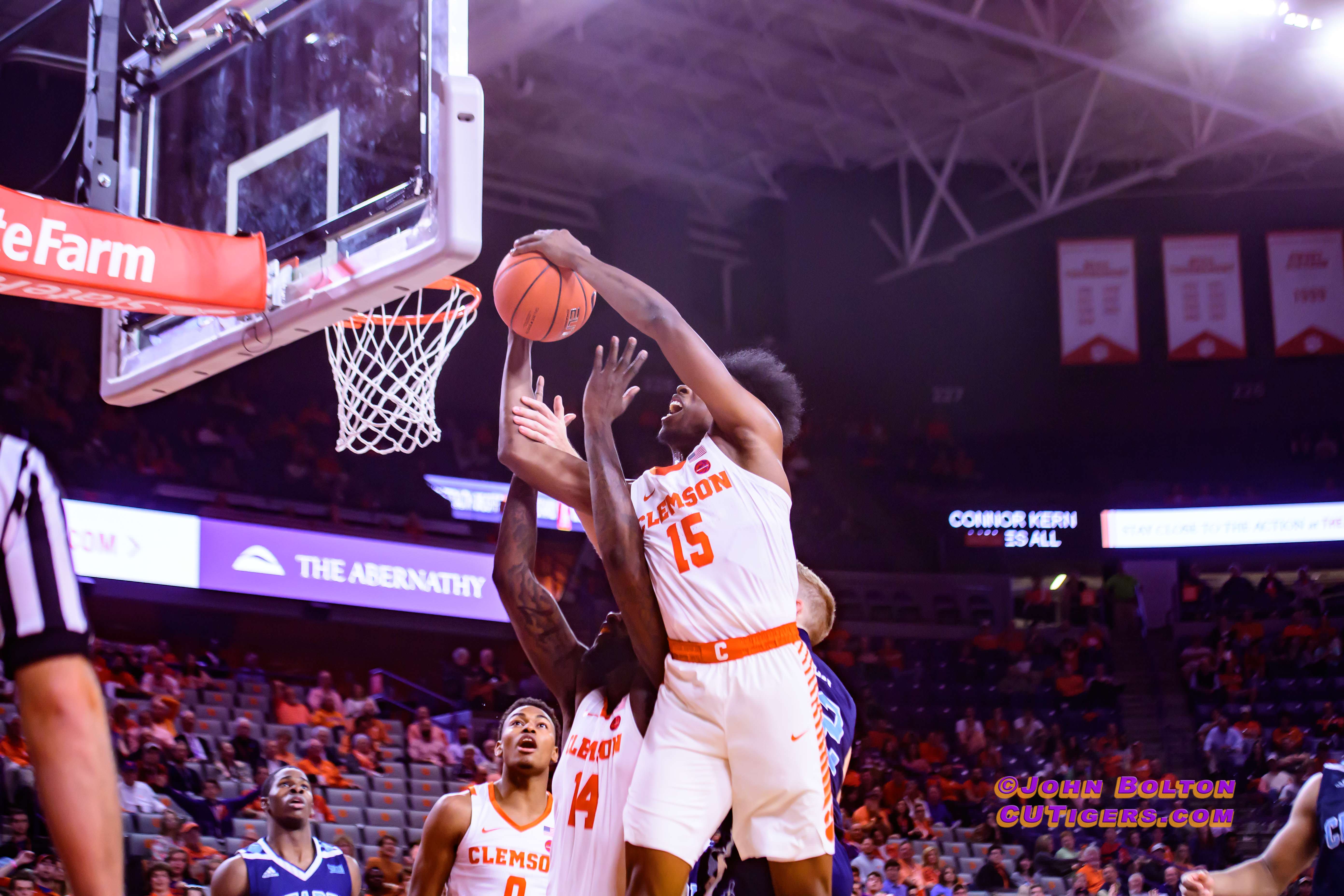 Brownell said he felt fortunate to be around long enough to win 150 games at Clemson and hopes he's able to win 150 more here. He has won the third-most games of any coach in program history. After the game, he thanked the fans for showing up and providing a good atmosphere on an election Tuesday during fall break for the students. Brownell said he has no idea when Malik William might be able to play. He's been suffering from concussion symptoms ever since a practice collision a teammate over the summer. He's been to several doctors and can't seem to shake the symptoms. Even if he's cleared to play soon, you have to wonder when he will be game ready, having missed so much practice time and conditioning. The Tigers are also thinner in the back court than they were a week ago, having lost guard A.J. Oliver, who decided to transfer.
The Tigers will next play on Friday, when they host NC Central at 7:00 in Littlejohn. Post-game interviews with Brownell, Reed and Trapp are below!