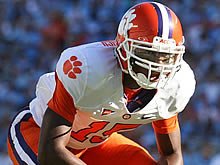 
From Clemson to the Steel City: Catching up with Coty Sensabaugh