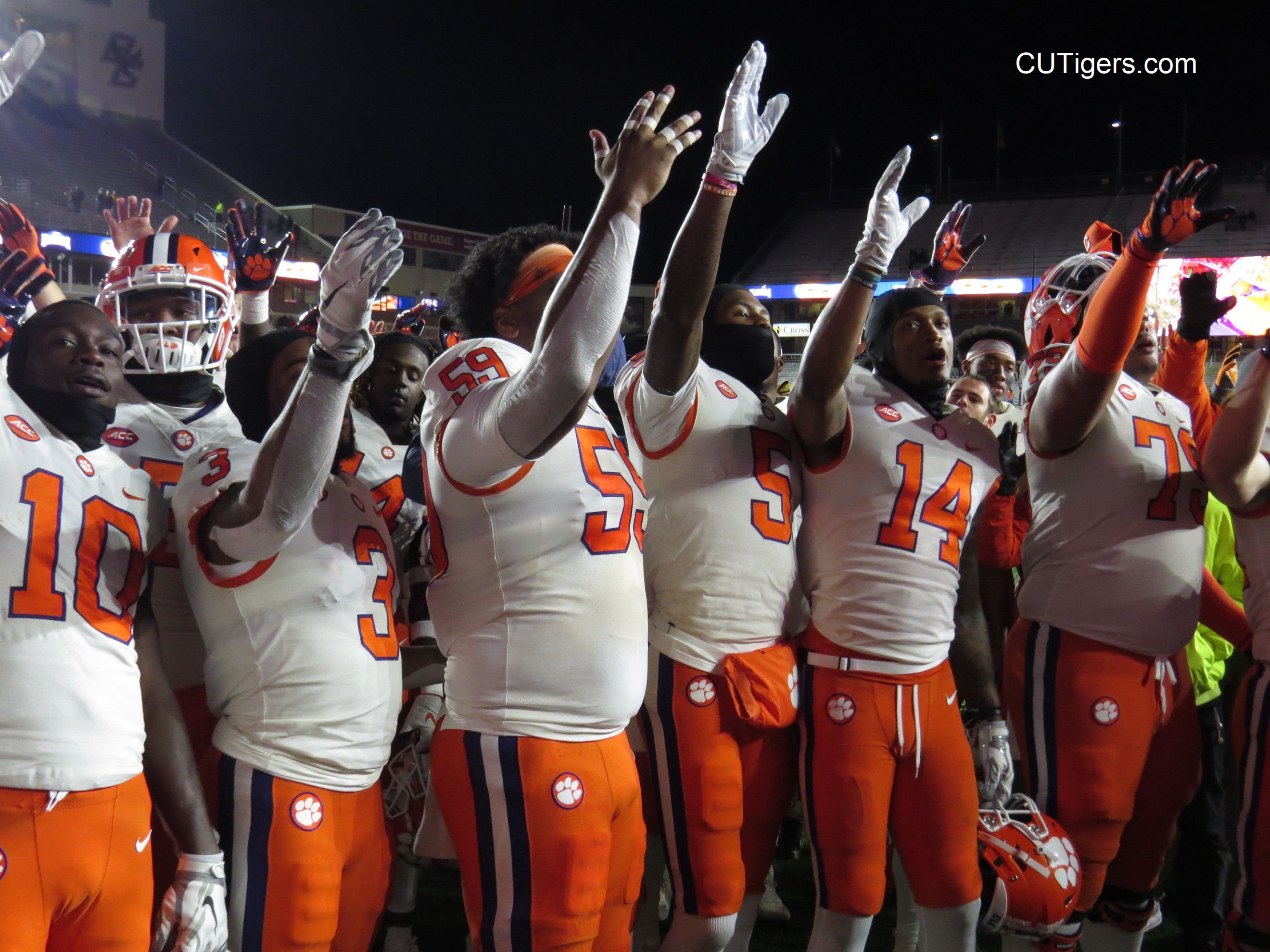 CLEMSON, SC – No.2 Clemson clinched its fourth consecutive Atlantic Division Title and ACC Championship berth in dominant fashion on Saturday night in Chestnut Hill, beating No.17 Boston College 27-7 in front of a sellout crowd. The Tigers are 10-0 for just the fourth time in program history but the second time in the last four years. It is their 8th straight 10-win season, tying them with Miami and Virginia Tech for the fourth-longest streak all time. The Tigers will take home the O’Rourke-McFadden Trophy for the 8th straight year and the 10th time in the last 11 years.

The Tigers were not as sharp offensively as they had been in their last four games, failing to convert on their first three 3rd downs in the red zone. However, the defense was as good as they’ve been in those four blowout wins and then some. They did not allow a single point and held BC to just 113 total yards. Every time the Eagles got a stop, the Tigers’ defense was able to get the ball back and keep the crowd out of the game. The Tigers have not allowed a first-half touchdown in 12 of their last 15 games. Starting Boston College quarterback Anthony Brown was knocked out of the game in the first quarter, and that obviously was an impediment to the Eagles’ offense, but the Tigers did an outstanding job containing All-American RB AJ Dillon as well. He rushed for just 39 yards, averaging 2.4 yards per carry. The Tigers held Dillon to 57 yards on 18 carries last season. Boston College was just 3 of 16 on 3rd down, and the Tigers had 4 sacks and 10 tackles-for-loss. Ironically, the Tigers failed to create a turnover, breaking a streak of 17 straight games.

Despite all the talk about Trevor Lawrence playing in the coldest conditions he’s ever faced, the true freshman was superb and was chosen to wear the leather helmet as the MVP of the game. Christian Wilkins was visibly upset that he didn’t get to don the leather helmet in his last meeting against his childhood favorite team, but he was also proud of his teammate. Trevor was 29-40 for 295 yards with one touchdown pass and an interception, which came late in the game. He also scored his first career rushing touchdown on a well-executed bootleg in which he fooled the entire defense.

The “Fridge Package” is now 3-3 this season, and the coaches have added a wrinkle each time. Rather than hand the ball off to Wilkins or Big Dex in the I formation, this time Trevor faked the handoff and threw a pass over the top to TE Milan Richard. The play was run to perfection, and that package is going to be a nightmare for opponents to defend. The Tigers ran the play on 4th and 2, and it was their first touchdown of the game.

Hunter Renfrow probably played his best game of the season, with 8 catches for 80 yards—both season highs. He caught a pass in his 38th consecutive game, tying the Clemson record set by Artavis Scott. Amari Rodgers also had a big game, catching 5 passes for 63 yards, but his biggest play was a back-breaking 58-yard punt return touchdown that put the Tigers ahead 27-7. It was Amari’s first punt return touchdown after coming close to going the distance several times this season. Rodgers muffed a punt earlier in the game on a missed interference call by the officials, so the touchdown was a nice redemption for him.

Other than the red zone struggles, the biggest negative for the Tigers was the punt return touchdown they allowed after a rugby-style punt by Will Spiers. The Tigers allowed a kickoff return touchdown in the second half last week, so the coverage team has some work to do.

Mitch Hyatt left the game for a few series in the first half with a shoulder stinger, but freshman Jackson Carman played well in his absence, and Hyatt later returned in the second half.

Wilkins, Bryant, Renfrow, Hyatt, Huegel and the rest of the seniors tied last year’s senior class with 50 wins—the most by any class in Clemson history. They are also, of course, the first group to play in 4 consecutive ACC Championship Games. The Tigers will host Duke next week on Military Appreciation Day, and the ACC has just announced that the game will have a 7:00 kickoff on ESPN.

As always, we’ll have our Sunday evening teleconference with Dabo, and I’ll post the audio for you shortly after. Stay tuned!