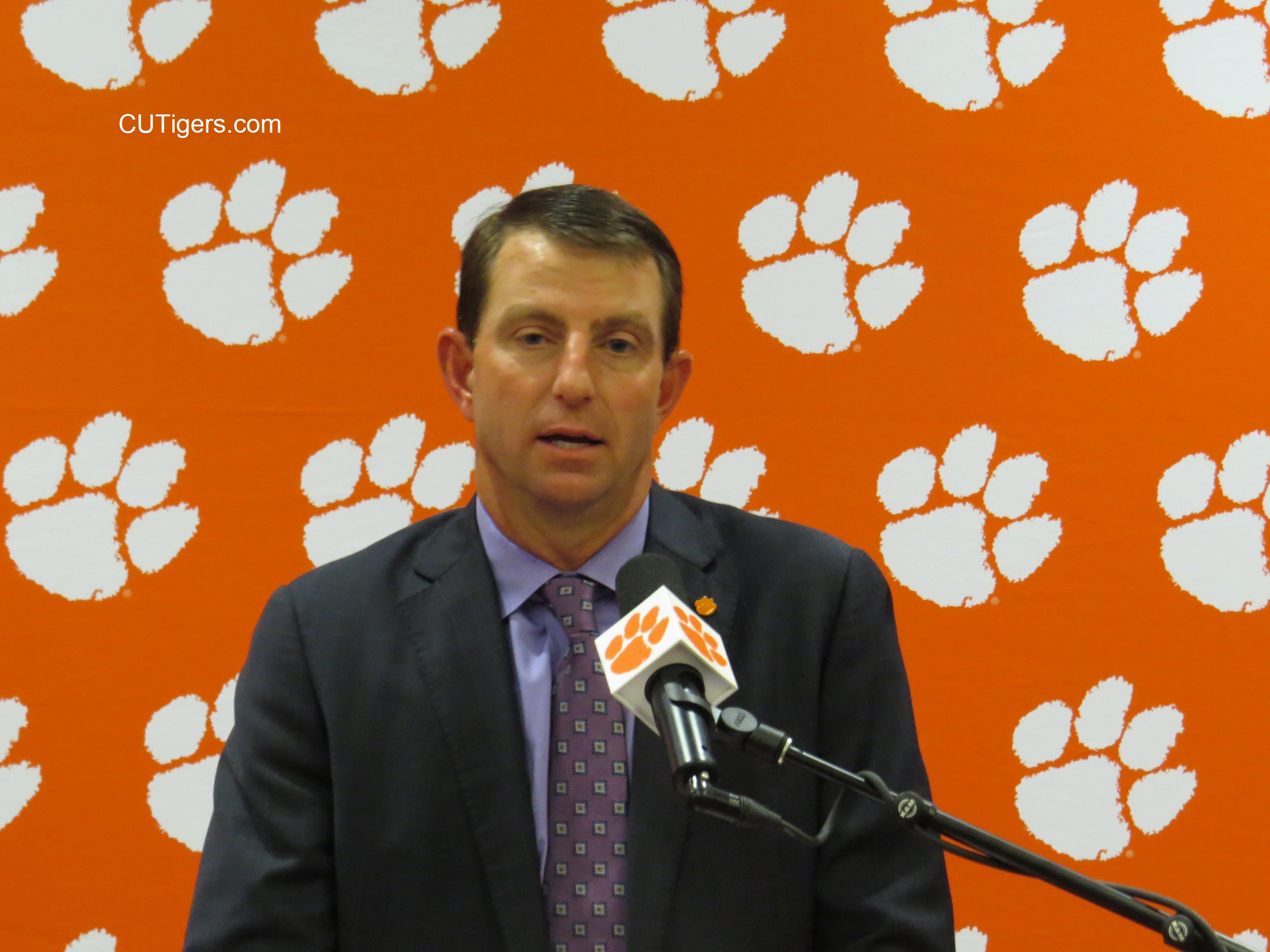 “I’m really proud of our team for how they responded in the second half. Obviously, we did not get off to a great start. We missed a couple third-and-twos and dropped more balls in the game tonight than we have all year. I was really disappointed in how we started, but it’s a four-quarter game. I challenged them at halftime to see how they could respond. To win 35-6 against a good football team...I’m really proud of our guys and how they responded. We had no turnovers and no sacks [allowed], so that is a positive to take away from the game.”

On the senior class:

“Our seniors have won 51 games, and I am so proud of them. They are an enjoyable group of young men that I get to be around every day. Every week, they lead our team in a tremendous way. It’s pretty impressive when you look on paper at what this group of seniors has been able to accomplish in their careers.”

“I thought Military Appreciation Day was an awesome night. Clemson does such a fantastic job at honoring our military. It was really cool for our guys to be able to see that.”

“We didn’t start how we wanted to, obviously, but we knew what we had to do. We wanted to leave no doubts. We wanted to come out, play well and execute and do the things that we were doing the first half.”

“I feel like I played decently. I definitely missed some throws, and there were some third downs that I wish I would have thrown a better ball. Overall, we won the game by a good bit. A win is a win, and that is what we came here to do.”

On the upcoming game against South Carolina...

“Even watching it on TV last year, you could see the rivalry between the two teams. It’s a big game, so we are just going to have a good week of preparation.”

On design of the pass rush:

“I think our guys played pretty well up front...nothing special. Sometimes the coverage was decent, and [Daniel Jones] held the ball. We felt going in that if we could get lined up and be in the right position, we could make him hold the ball a little bit.”

On the Duke’s play designs in the first quarter:

“They ran some new stuff [in the first quarter], and it’s not our guys’ fault. That’s on me in terms of making adjustments and getting them to understand what they’re doing, and I thought our guys responded well.”

“That was a very interesting first half. We got to a third and short, had an RPO called. The quarterback chose to throw, and he’s got every right to throw it there...we just missed the throw. We come back on another short yardage, and we don’t convert. We try to get some stuff going in the running game, and obviously, they were dead-set on stopping the inside run, so it’s going to take us a little bit of time, but we needed to get the game under control. They were giving us a lot of soft coverage, so we’re going to take the easy throws. Then you saw in the second half...they decided to take those throws away and forced us to run the ball. We challenged our guys at halftime. I think we only had about 17 yards rushing, obviously because of the situation in the first half, and they came out there and responded.”

On halftime message to team:

“Settle in and be who we are and respond. You have an opportunity to respond. You got the second half. It’s zero-zero. The biggest thing for us, offensively, was to challenge them and make sure we could establish the running game, and we were able to do that the first drive coming out and spark the second half for us. The biggest thing was to challenge them to have the heart of a champion. We say we’re a championship-caliber team. We have to respond that way in the second half.”

On establishing the running game:

“[Duke] has a lot of seven-man boxes, so they were dead-set on getting those safeties down there, and they were playing soft coverage. They were rotating their safeties, so the biggest thing there was we didn’t get into a rhythm running the ball, because we weren’t have success. We weren’t staying ahead of the chains, so we had to throw the ball, and they were jumping back into cover two, doing a lot of line twists. It took us a little bit of time to get settled in, and once we were able to commit to establishing the run we found some success.”

“I’m proud to get the win. Big congrats to our seniors...51 wins in four years. That’s a Clemson record and ACC record. I’m really happy for those guys. Obviously, we had a slow start in the first half and some issues on third down. We couldn’t stay on the field, but we turned it around and were 4-for-7 in the second half...it’s good for us to have an opportunity to refocus. Our guys will continue to work hard and improve on that, but we’re really happy with the win and how we responded.”

On the first half:

“The biggest thing in the first half was all of those third-and-long situations. We didn’t have as many opportunities to get in rhythm. They played some coverage of some different things, so we really needed everyone on the same page. Guys got frustrated that we weren’t getting it done like we needed to in the first half, but everyone was running hard, and we did a better job up front. Getting the first downs in the second half helped us get a better tempo and wear [Duke] down.”

On halftime message to team:

“We challenged our guys at halftime. We’ve had a lot of games where we have the upper hand going into the half, but that’s not going to be the case as the competition continues to get better. We just told them ‘Hey, let’s find out what we’re made of today.’ There’s no reason to be worried about what we didn’t do in the first half...let’s go focus on the second half.”

“I didn’t want to take this moment for granted. It was just a great experience.”

“We started off slow, and someone needed to make a play, so I felt like I had to step up, make a big play and help us win for the seniors. I’ve definitely grown a lot since the first game.”

On the second half:

“We tried to put the first half behind us and keep pushing. We made plays throughout the game, and we left some out there, but we just need to keep better every week.”

On his first night game:

“It’s a totally different environment...the best one I’ve been in. The fans flashing their lights...it’s the best environment I’ve played in.”

On his mom, a veteran:

“I was thinking about my mom while I played. After I scored, I looked to point to her, but I couldn’t see her. It meant the world to me to play this game and have her watching me. She’s sacrificed so much for me. I knew Military Appreciation Day was a big deal, but it’s even more than I thought it was. People came in and told us their stories...it means a lot and I’m thankful for their sacrifices.”

“We came together as one and put all our power into it. It was fun to see...it was fun to be there. I had a great time. It was good to actually buckle down as a defense and hold them to six points.”

On the upcoming game against South Carolina:

“I really don’t have much to say about South Carolina. It’s another game. At the end of the day, we play Clemson. As long as we don’t lose to Clemson, we’ll be fine. It’s just business. I grew up thirty minutes from Columbia. I visited USC a lot. It’s just another game for me. It’s another opportunity to go out there and play for my brothers and show my talent off.”