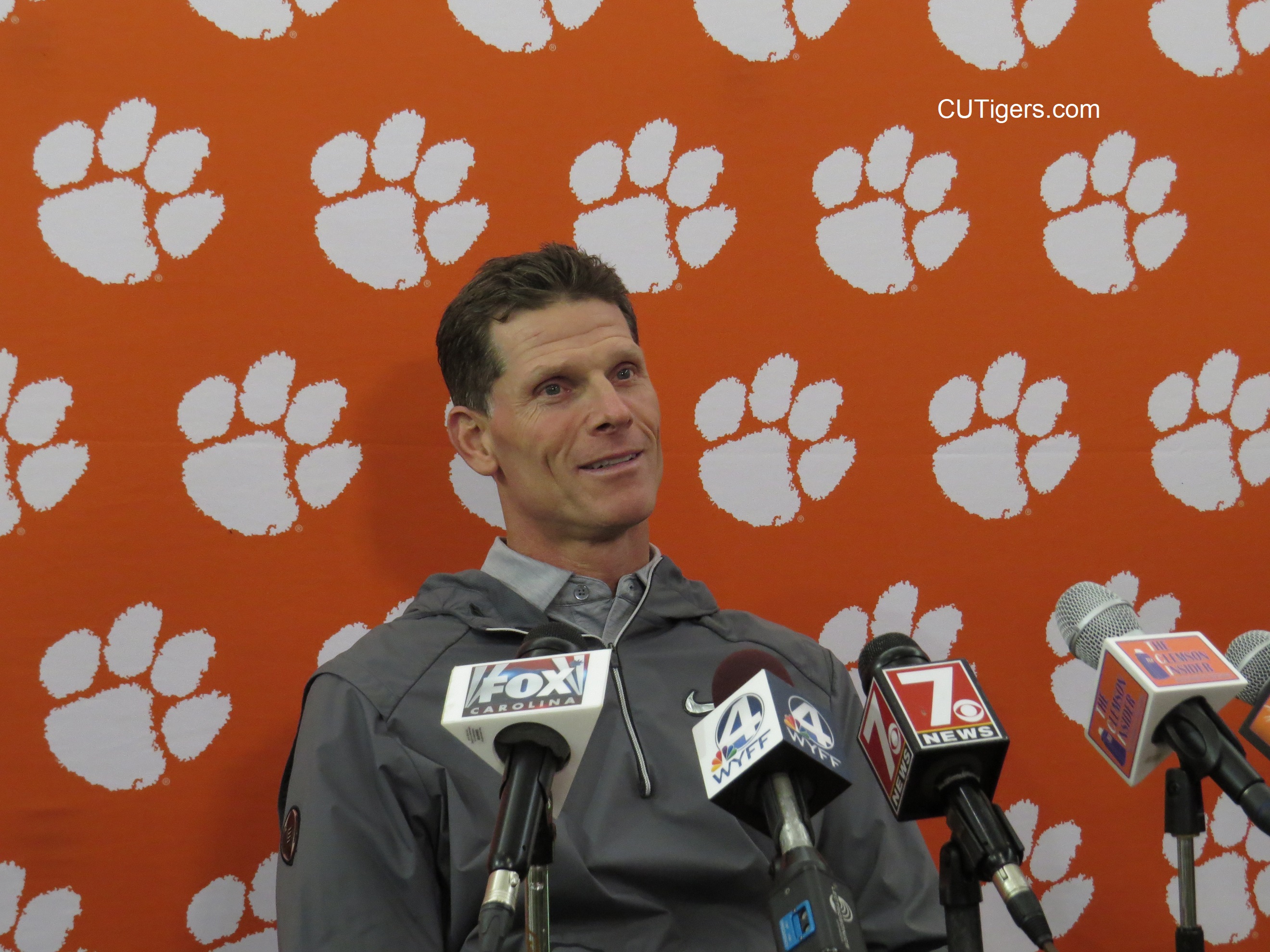 Photo by Trevor Groves CUTigers.com
We spoke with Brent Venables, Jeff Scott, Shaq Smith, Justin Falcinelli and Will Spiers today. I asked Venables about what, to me, is one of the key matchups on Saturday night: the Tigers' pass rush against the Gamecocks' offensive line, which is probably their biggest strength. It's a veteran group that has allowed just 1.5 sacks per game this season. Conversely, the Tigers are #2 in the nation in sacks and have registered an average of almost 5 sacks per game over the last 4 contests. Venables said the Gamecocks' low sack allowance is a product of both the veteran offensive line play and Jake Bentley's pocket presence. He knows his way around the pocket and how to avoid taking sacks. I also asked Venables for his thoughts on the Les Miles hire at Kansas, and he had a good response to that. Venables, of course, is from Kansas originally and played at Kansas State. He also coached against Miles when he was the defensive coordinator at Oklahoma and Les Miles was the head coach at Oklahoma State. In fact, Miles upset the Sooners a couple of times in that Bedlam rivalry.
Jeff Scott told us an amusing story about growing up on both sides of the Clemson-South Carolina rivalry. He was in high school when his father, Brad Scott, moved from Head Coach of the Gamecocks to Offensive Coordinator for the Tigers, so he has a unique perspective on the Palmetto Bowl. I asked him if he and the other coaches talk to the players about maintaining their composure if things start to get chippy on the field. He said that there is such strong leadership on the team that they do a good job of policing themselves and avoiding those situations, but they do remind some of the younger guys about keeping their cool. We all remember the brawl in 2004 that cost the Tigers a bowl when they were blowing out the Gamecocks and the game was all but over. That was the only season the Tigers missed a bowl in the last 20 years!
Finally, we spoke to Will Spiers, Justin Falcinelli and Shaq Smith. Shaq saw more of the field on Saturday than he has in his career as a redshirt sophomore, and he talked about staying the course and continuing to work hard and being ready when his opportunity comes. He grew up in Maryland like I did, so I asked him when he first learned how intense this rivalry was. He said he quickly found out when he got to campus a couple years ago, and he also talked about the South Carolina fans spitting on the players and throwing things at them last year in Columbia.
You can watch the full interviews below. Don't forget to check back in tomorrow for Dabo's Tuesday press conference and more player interviews, including Trevor Lawrence!l