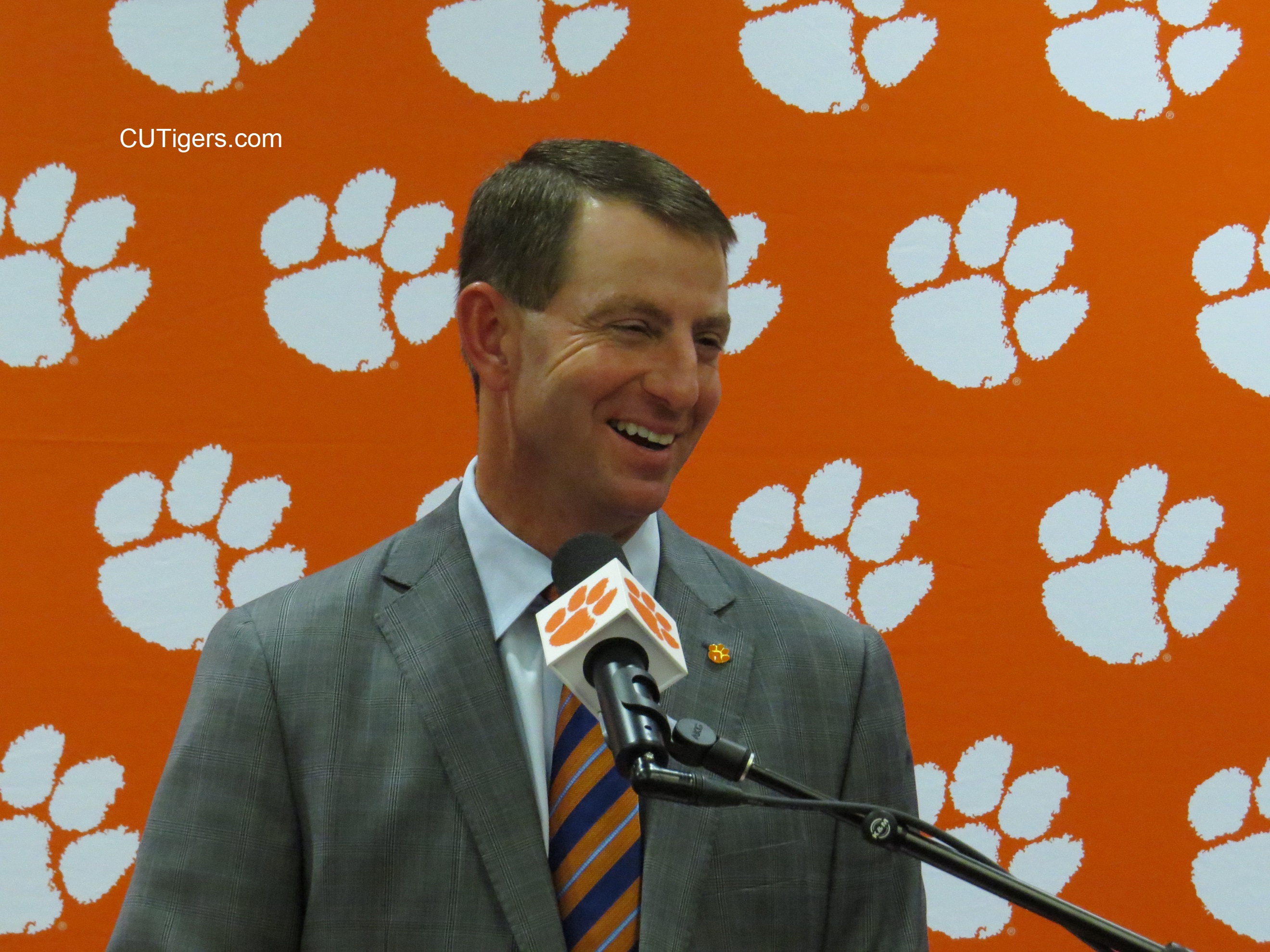 “I’m so proud of our team. It’s so hard to go 12-0. It’s only the third time ever that’s been done here. Also, what an amazing accomplishment for this team to achieve something that hasn’t been done in my lifetime by beating South Carolina five times in a row.”

“Give South Carolina credit for making plays and continuing to compete. At the end of the day, our team was too strong across the board. I take my hat off to my players and staff to win a rivalry game by three touchdowns.”

On the offensive showing:

“That was an amazing performance by our offense. Trevor [Lawrence] was unbelievable in his first rivalry game. Our receivers made tons of plays. Hunter Renfrow made some amazing plays on third down. Our offense played maybe its best game of the season and had great balance. All of our running backs ran well, and our offensive line dominated and gave up no sacks.”

On the outlook moving forward:

“There’s a lot that happened in tonight’s game that we can improve on defensively, but the positive is that we won by three touchdowns. But it’ll make us better heading into postseason. Now, we’ll focus on making more history next week. There’s never been a team win four ACC Championship Games in a row, so we’re excited about having that opportunity.”

On the significance of the win:

“The seniors got their 52nd win. Playing in his last game at Death Valley, Christian Wilkins was amazing. He had a great touchdown run and got a sack, as well. All in all, we’re division champs and state champs, so we’re going to enjoy this one tonight. We’ve got bragging rights for a year, but we’ll be ready to move on tomorrow and focus on Pitt.”

“It was awesome. It was a great experience. The atmosphere was crazy.”

On the shootout between himself and South Carolina QB Jake Bentley:

“I didn’t really know [if that would happen]. I knew we were prepared and played a good game. We did what we set out, which is to win the game, so I’m really proud of that.”

On setting the Clemson passing yards record against South Carolina:

“That’s awesome. Really, I have to shout out my offensive line and wide receivers. They make it really easy for me.”

On the senior class:

“First of all, I’m really happy for our seniors. That was the big message for us going into this game...this senior group deserves a great finish in Death Valley. We said ‘we’re four quarters away from your last game in Death Valley.’ For that group to finish the way that we did is really special.”

On Clemson’s start to the game:

“To have a great finish, we needed a great start, and to be able to go out on our first four drives and get touchdowns was huge and was something we talked about all week long.”

On the offensive line’s performance:

“I am really proud of the offensive line...no sacks [allowed] again tonight. I believe we’ve had one sack [allowed] in [the last] five games, which is incredible. Also, [we] had over 350 yards rushing, which is awesome. Those guys don’t get enough credit, since we have a bunch of special, skilled kids around...we’ve had skilled guys around here for a long time, but now we’re running the ball better than we ever have.”

“I’m just really, really proud of our guys and how they showed up ready to play. We knew that we were going to have to set the tempo up front, in the trenches. We told the guys that in the first two play calls, we were going to establish the run. They really took that to heart and carried over the momentum from the second half of the Duke game.”

“For him to come out and have such a big game...it couldn’t have happened to a better guy. He’s been the rock in my room, and I’ve tried to express that as much as I can. He makes me a better coach.”

“I’m proud of our guys to be 12-0 and beat [our] rival five years in a row. It’s tough to do. It’s been done once in 78 years. I’m proud of our seniors and their incredible leadership. They won 52 games, and to finish their last game here in Death Valley, that’s big time.”

“I’m disappointed in our performance tonight...not with everyone. I thought South Carolina and Jake [Bentley] had a good plan, and they played well. Obviously, I didn’t coach them very well tonight. I’m very embarrassed about different things that happened there tonight, and obviously, it’s my responsibility to get our guys ready.”

“We kept letting guys get inside of us. It’s not really complicated.”

On when he knew he was playing tonight:

“I knew I was playing [last] Saturday night whenever I got knocked out. I knew that I wasn’t going to let this opportunity pass up, regardless of what happened. If I had to lie, I had to lie. But I felt pretty good. Tuesday was the biggest jump for me. I felt really good Tuesday after practice and [have] felt pretty good for the most part [since then].”

On type of injury he suffered last Saturday against Duke:

“It’s weird. I never really had a concussion, but I guess I might have had one on Saturday. I knocked myself out. But I remember everything, and I felt fine. I remember Coach [Daob] Swinney coming in and asking me when I was getting married, and I was joking with him...I told him the wrong girl, and I was having a good time with that.”

“Watching that Oklahoma game and the Michigan game today with Ohio State, there was a lot of offensive firepower this weekend. So, it was good to go out there and play well.”

“I read the quarterback, I tried to make a play, and the ball kind of ended up in my hands.”

“It feels great, but we know the journey is not over. One of our goals was to win the state championship, so obviously we’re really excited about that...but we know that there is a lot more work to do.”

On giving up over 600 yards on defense:

“I wouldn’t have imagined it. I’m glad we finished the game.”

On what he learned about the team from this game:

“The offense was able to complement us well, and the special teams did a great job. We just kept fighting through adversity, and we’ll learn from this game.”

“He’s a great quarterback. He made some good throws.”

On if he’s disappointed with defensive performance:

“We came here to win the game, and we didn’t get the job done.”

On the defense’s injuries and ability to get stops:

On the play after halftime:

“Offensively, we played extremely well. We needed to score touchdowns in the red zone. In both situations, I told [offensive coordinator Bryan McClendon] he had four downs. We needed to go score, knowing our situation defensively.”

On fourth down plays:

“I think they defended the ball on both of those. I had a hard time seeing down on the other end zone, but down here [in the West End Zone], I thought they did a good job defending the ball.”

“The guys fought their guts out. We came here to win the game.”

“I thought he played extremely well...gutsy, tough. That’s who he is. I’m glad he’s our quarterback.”