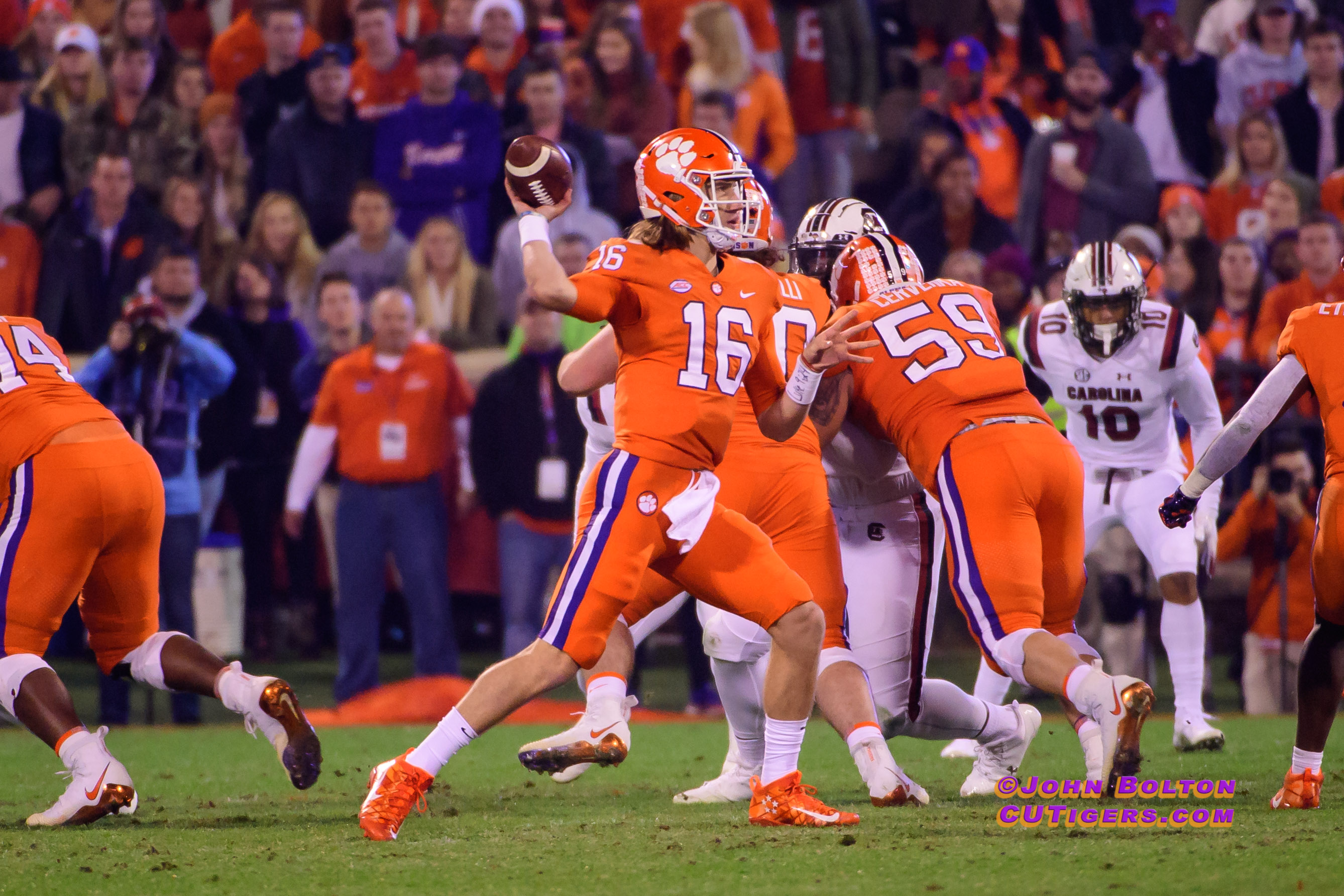 CLEMSON, SC – It seemed almost a foregone conclusion that No.2 Clemson would win its fifth straight Palmetto Bowl, and the only question was how ugly it would be. It wasn’t as bad as the odds-makers thought—the Tigers were favored by 26.5 points—but the Tigers quickly put the game to bed in the 3rd quarter, scoring touchdowns on their first two possessions to double up the Gamecocks 42-21. The Tigers would indeed go on to win their fifth straight Palmetto Bowl by a score of 56-35. It's their longest win streak in the series since they won their seventh straight in 1940. Coincidentally, the Tigers also scored 56 against the Gamecocks two years ago, winning 56-7 in Death Valley on their way to a national title.

Saturday night was a bit of a wake-up call for the Tigers’ defense, which had been playing like the best unit in the nation for the last 6 games. As Dabo put it, “they got a dose of cough syrup.” The Tigers hadn’t allowed an offensive touchdown in their last two games and hadn’t allowed a first quarter touchdown all season long. Both of those trends went by the wayside, as the Gamecocks took their first possession right down the field for a touchdown. The Tigers had busted coverages in the secondary all night, and Jake Bentley finished with 510 yards, the most ever by a Gamecock quarterback against the Tigers. It would appear the third time is the charm, as Bentley had miserable outings in his first two meetings with the Tigers. Deebo Samuel missed this game last year with a broken leg, but he made up for it with 3 touchdowns and 210 reception yards. Offensive Coordinator Bryan McClendon and the Gamecocks brought the kitchen sink offensively, and it clearly confused the Tigers. It could end up being a blessing in disguise, though, because it exposed a vulnerability that didn’t seem existent before. It was very similar to the Pitt game two years ago, except the Tigers lost that game—their only loss en route to a national title and only home loss in the last four years. The Tigers were #2 in the nation in total defense coming into the game, allowing about 250 yards per game. The Gamecocks racked up exactly 600 yards against the Tigers with a couple scoring drives under a minute and another one that took 1:05. You can bet Pittsburgh, Notre Dame and Alabama will be taking notes and try to replicate what no other offense has been able to do against Brent Venables and the Tigers this season.

As bad as they were on defense, however, the Tigers were even better on offense. The Tigers racked up 744 total yards of offense to go with their 56 points. Trevor Lawrence also set the record for most passing yards by a Clemson quarterback against the Gamecocks, completing 27-36 for a career-high 393 yards and a touchdown with no interceptions. He also had his longest run of 32 yards after posting his longest run last week of 19 yards. I asked Dabo last week if Trevor’s running could become a bigger part of the offense moving forward, and it looks like it will.

As good as the offense was, it could have been even better if not for some mistakes, especially in the first half. Justyn Ross dropped a touchdown, and Trevor Lawrence committed a fumble in Gamecock territory. Amari Rodgers had a touchdown negated for offensive pass interference that easily could have gone either way.

The running backs were outstanding, averaging 6.26 yards per carry and 6 touchdowns as a group. Adam Choice had the best game of his career with 3 touchdowns, and Etienne added 2, becoming the first Tiger with 18 and then 19 rush TD’s in a season. He came into the game tied with Wayne Gallman, James Davis and Lester Brown for the Clemson single season record. Lyn-J Dixon came into the game in the first half, suggesting the coaches are feeling more and more comfortable with the true freshman in critical situations. He came into the game leading the nation in yards per carry—the only player with over 10 yards per carry—so it’s hard to keep him on the sideline! In all, the Tigers rushed for 351 yards. Even Christian Wilkins got in the act, running the ball on consecutive plays in the Fridge package. He was stopped for the first time on 3rd down, but the Tigers gave him a mulligan with a toss sweep on 4th and one, and Wilkins would not be denied again in his final game in Death Valley.

Wilkins wasn’t the only senior with a big final home game. Hunter Renfrow’s status was questioned all week after coming down on his head in the first quarter last week, but the Clemson legend extended his school record for most starts by a receiver and also extended his record to 40 straight games with a catch. Renfrow made a couple enormous drive-extending catches and finished the night with 5 receptions for 80 yards. J.D. Davis got the start for Tre Lamar, who could have played but sat out with an injury, and he made his final home game count, coming up with his first career interception. He told me after the game that he really didn’t want to end his career without a pick, so to do it in his final game in Death Valley against the Gamecocks was incredibly special. The Tigers hadn’t produced a turnover in their last two games after 17 straight games with at least one turnover, and Davis’s interception was the only one of the game.

Tee Higgins also had a monster night with 6 catches for 142 yards and a touchdown, and the offensive line deserves a lot of credit as well. Not only did the Tigers rush for 351 yards, but they did not allow a sack for the fourth time in the last five games. In fact, they have allowed just one sack in those five games. John Simpson was helped off the field at one point but returned to the game and appears to be fine.

With the Palmetto Bowl win, Clemson has won 100 games in this decade, joining Alabama and Ohio State as the only programs to do so. The Tigers are 12-0 for the second time in the last four years and will set their sights on Pittsburgh for their fourth consecutive ACC Championship Game. Remarkably, it will be the Tigers’ fourth different Coastal Division opponent in the last four title games and fifth different opponent overall, having played Georgia Tech in 2009. It is illustrative of the incredible consistency Dabo has built over the years when there is so much parity across the board in college football.