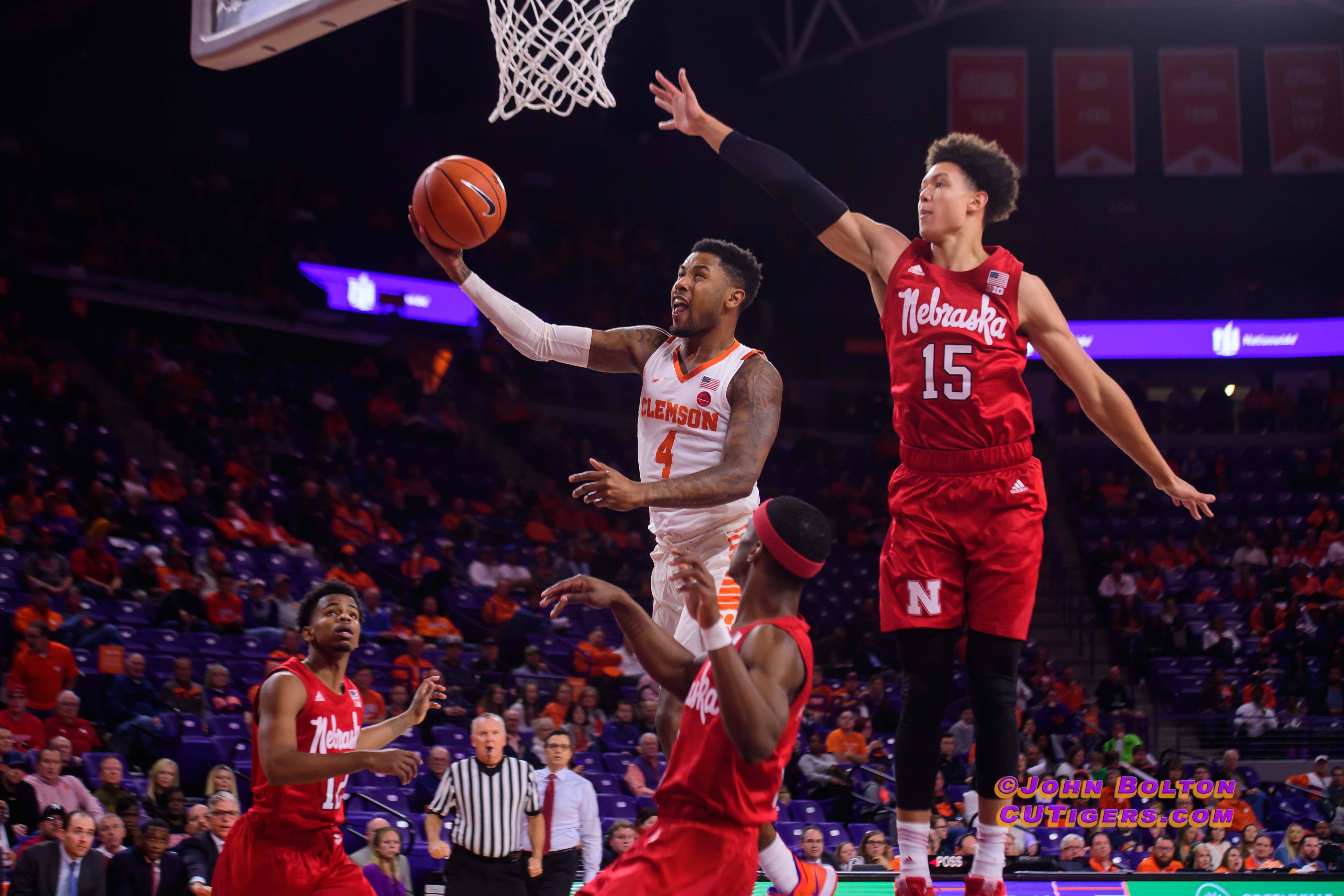 
FURIOUS RALLY COMES UP JUST SHORT, AS NO.24 CLEMSON LOSES TO NEBRASKA 68-66

BOX SCORE
CLEMSON, SC - No.24 Clemson suffered a tough 68-66 home loss to a good Nebraska team that was 5-1 coming in. It would have been a miraculous comeback by the Tigers if they pulled it off. Nebraska got a big offensive rebound that led to a 3-pointer to put Nebraska up by 8 points with about 2 minutes left, and then they led by 7 with 1:20 left. A free throw by Mitchell and a put-back by Thomas on a miss cut the lead to 4. Mitchell came up with a steal on the half-court press and found Skara for a dunk to cut the lead to just 2 with a minute left. The Tigers got the stop they needed on defense, but their best scorer, Marcquise Reed, traveled on his way to the basket for the would-be tying score. It was the right call--Reed took an extra step. Ironically, Clemson has lost multiple games over the years because the refs didn't call a travel on the other team. This time, they got the call right, and it was a huge turnover. Nebraska made both its free throws, and the Tigers were unable to complete the comeback.
It was the second straight loss for the Tigers after a 5-0 start. They lost just one home game in all of last season. The crowd definitely wasn't very good tonight for an ACC/Big Ten Challenge game, and Brownell mentioned that after the game. Whether the extra energy from a packed house could have made the difference is anyone's guess.
Reed finished with 15 points but only had 4 at the half. He traded his pink shoes for blue ones at the break, and it appeared to work because he had a better second half. I imagine Brownell would like to see him more aggressive early, though. Reed came into the game averaging almost 20 points per contest. Eli Thomas got into foul trouble early, and that hurt as well. Brownell told me after the game that he needs to get a couple solid weeks of practice in without any complications. He had the ankle injury at the beginning of the season and then missed time with the flu a couple weeks ago.
Ultimately, it just seemed to be an off night for the Tigers, and you have to wonder if they were a little lethargic from the long trip to the Cayman Islands, where they played 3 games in as many days. They were 3-4 from beyond the arc early but made just one 3-pointer the rest of the way, finishing 4-12.
The Tigers have a week off to figure some things out before their next game here at home next Tuesday against St. Peter's, and the long break comes at the perfect time for the team to regroup. Post-game interviews with Brownell and Shelton Mitchell are below.