When I moved from Pennsylvania to the small town of Dillon, South Carolina in 2011, my oldest brother was the starting quarterback for the AA football-famous Dillon High School. Every single week during football season, new statistics came out that ranked the quarterbacks in the Pee Dee. While my brother was ranked consistently at No.10, the Socastee High School quarterback, Hunter Renfrow, was ranked consistently around No.33. That modestly ranked high school quarterback is now one of the most well-known wide receivers in the nation, playing for one of the top teams in the land. 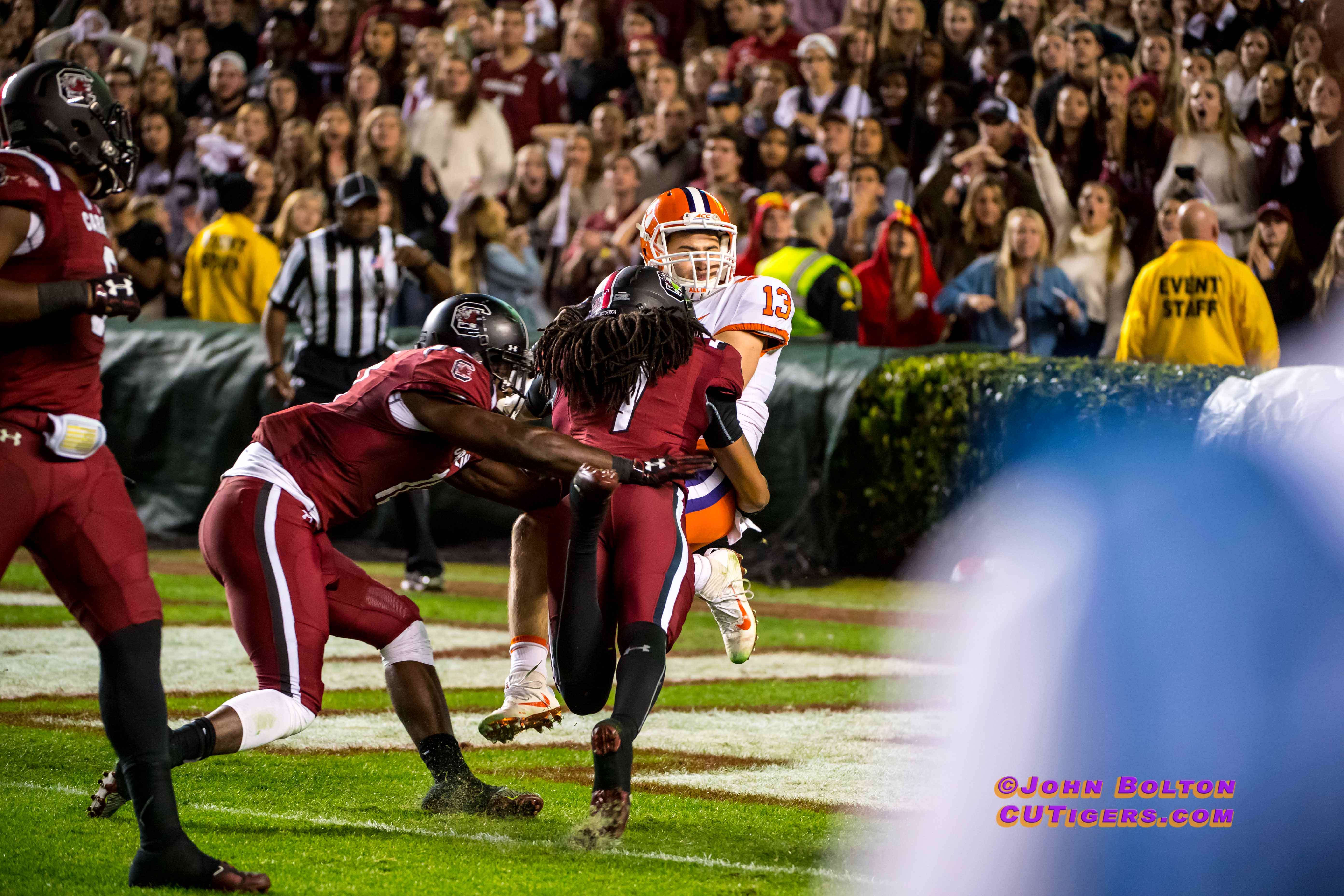 Anyone who's ever met the 5’10”, 185-pound Myrtle Beach native would tell you he's built like anything but a football player. If Renfrow told you he is a football player, you’d probably guess he’s a kicker or a punter. Since Renfrow’s parents did not let him play football until middle school, he started his athletic career playing soccer and baseball. Ranked the No.6 Diamond Prospects outfielder in South Carolina, Renfrow had his eye on playing baseball after high school. He considered playing for the entire summer before his senior year but flipped the script when Clemson invited him to their summer football camp that year. 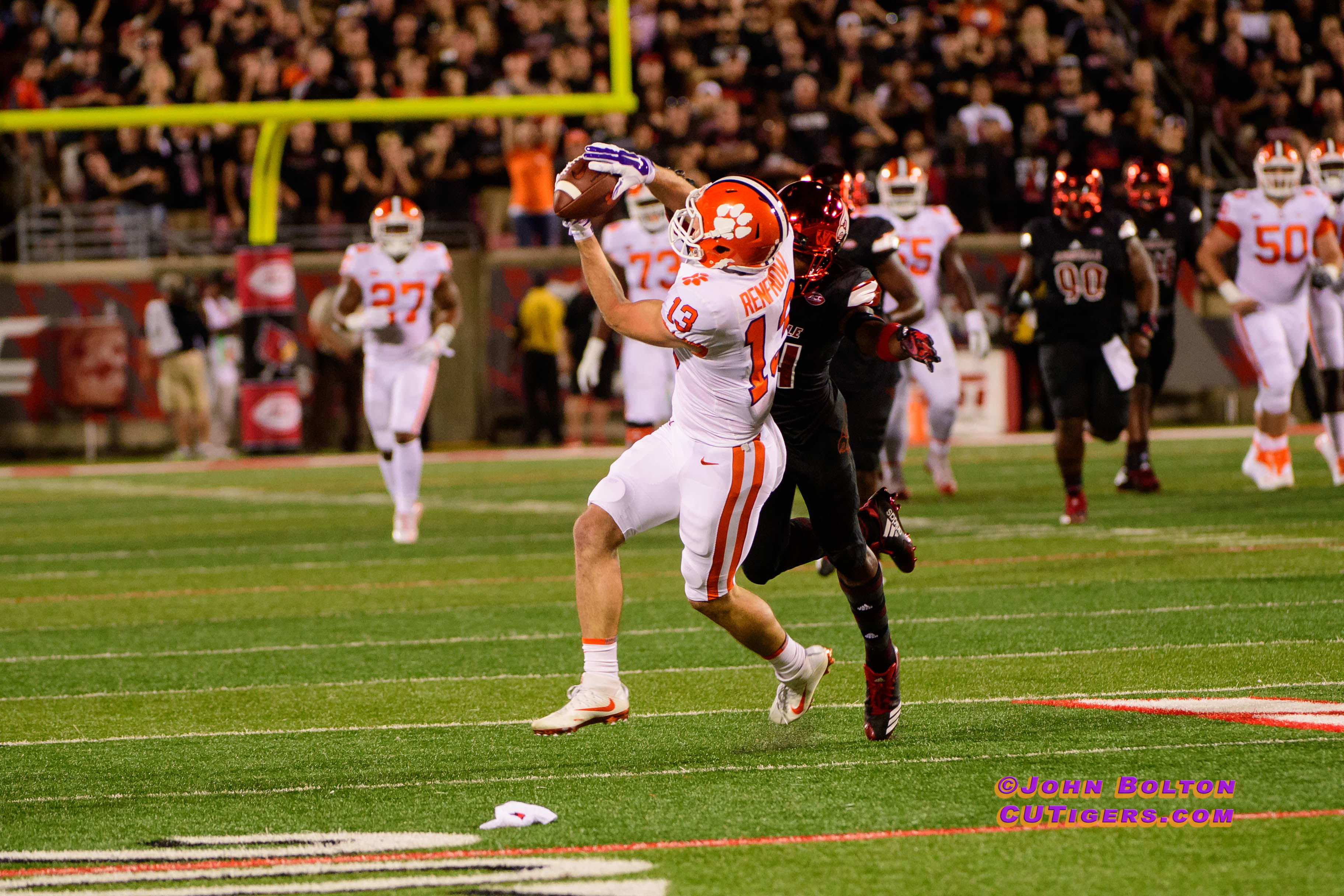 Clemson Head Coach Dabo Swinney offered Renfrow a spot as a preferred walk-on after the first session of the summer camp before his senior year. At the time, Renfrow had received scholarship offers from Presbyterian College, Appalachian State, Gardner-Webb University and Wofford College. However, Renfrow’s dream was to play at Clemson since he was a little boy, playing in the front yard with his future high school football coach, who just happened to be his father. After receiving the offer from Swinney, Renfrow thought back on how he always pictured himself getting a scholarship to play for Clemson. “I have to take what I have earned. Nothing is given to me,” was one of the lines Renfrow played in his head before he committed to Clemson to play football.

Renfrow started his Clemson career by redshirting his freshman year. The summer before his next year, during a team retreat, Dabo Swinney handed Renfrow an envelope granting him a full ride to Clemson. Swinney looked at the team and said, “Hunter is a great example of ‘don’t judge a book by its cover,’ because he damn sure doesn’t look like a football player…but this old boy can ball, and I think he’s earned everybody’s respect in this room.” Coach Swinney finished off the moment with letting him know that the scholarship was only good for a year, and that Renfrow would have to earn it every year after that.

His redshirt freshman season after earning the full scholarship, Renfrow played in 15 games and started in 10 of them. In those 15 games, Renfrow had 33 catches for 492 yards and 5 touchdowns. One of his TD’s came in the College Football Playoff Orange Bowl Semifinal against Oklahoma, which was led by another former walk-on, Baker Mayfield, who would later win the Heisman. In the subsequent National Championship Game, Renfrow caught 2 of Deshaun Watson’s 4 touchdown passes, which earned him the “Co-Player of the Game,” alongside the current Houston Texans quarterback. That first season’s performance earned him a full-ride scholarship for the rest of his Clemson career.

As a graduate student now in his fifth year at Clemson, Hunter Renfrow has played in 49 games, starting in 44 of those games—a new Clemson record for starts by a wide receiver. In those 49 games, Renfrow has caught 164 passes for 1,894 yards and 15 touchdowns. Five of those touchdowns have been in College Football Playoff games. In his four years on the field, Renfrow has earned numerous awards and honors. One of the highest honors he has received was being named a finalist for The Burlsworth Trophy, which is awarded to the top football player in the country, in his final year of eligibility, wo began his college career as a walk-on. Dabo Swinney, a former walk-on wide receiver himself, said he’s been waiting for the chance to nominate one of his players for the award for years, and Renfrow is the ideal candidate. He has also received the Offensive Hustle Award in 2016, a Third-Team All-ACC selection in 2017, a Preseason Third-Team All-ACC in 2018, and just before leaving the first quarter of the Duke game with a concussion, Renfrow broke Artavis Scott’s Clemson record for most consecutive games with a catch. Not bad for a former walk-on at a school known as “Wide Receiver U.” Renfrow is currently ranked the #140 player in the Nation according to NFL.com.

Not every athlete in the world can have the versatility to play several different positions at a high level. Hunter Renfrow is one of the rare, natural talents who can do just that. Not only does he start at wide-receiver, but he also has played at quarterback and punter in the same game at Wake Forest this season! He led a touchdown drive at QB, and his punt was a good one—it went for 42 yards. Apparently, Hunter Renfrow can play on the other side of the ball as well. After Kelly Bryant decided to leave Clemson earlier in the season, Trevor Lawrence got hurt in his first collegiate start at QB. Hunter Renfrow was then put on the depth chart as one of the backup QB’s. The funny thing about him being put on as a back-up quarterback is that the week after Kelly Bryant made the decision to leave Clemson, Coach Venables walked up to him and asked him, “Ready to play quarterback?” Renfrow thought that he said “corner back” and started going on about how ready he was and that he knew all of the coverages. After Venables gave him a funny look and went about their practice, Renfrow realized that he meant quarterback, not corner back.

Although though Clemson fans appreciate Renfrow for being such an all-around player and guy, they are even more thankful for all of the acrobatic catches he makes at his primary position. In college and even the NFL, many players will not make an attempt for the ball if it doesn’t look like it is going to land right in the bread basket. Renfrow throws himself all over the field, ducking, diving, twisting and contorting to make sure he can catch anything that comes his way. He leaves people speechless with the ways he is able to make plays that even some of the best receivers would not come close to making. Dabo Swinney addressed the catch Renfrow made in the Syracuse game: “Some of the plays he makes – you ever expect him to make.” 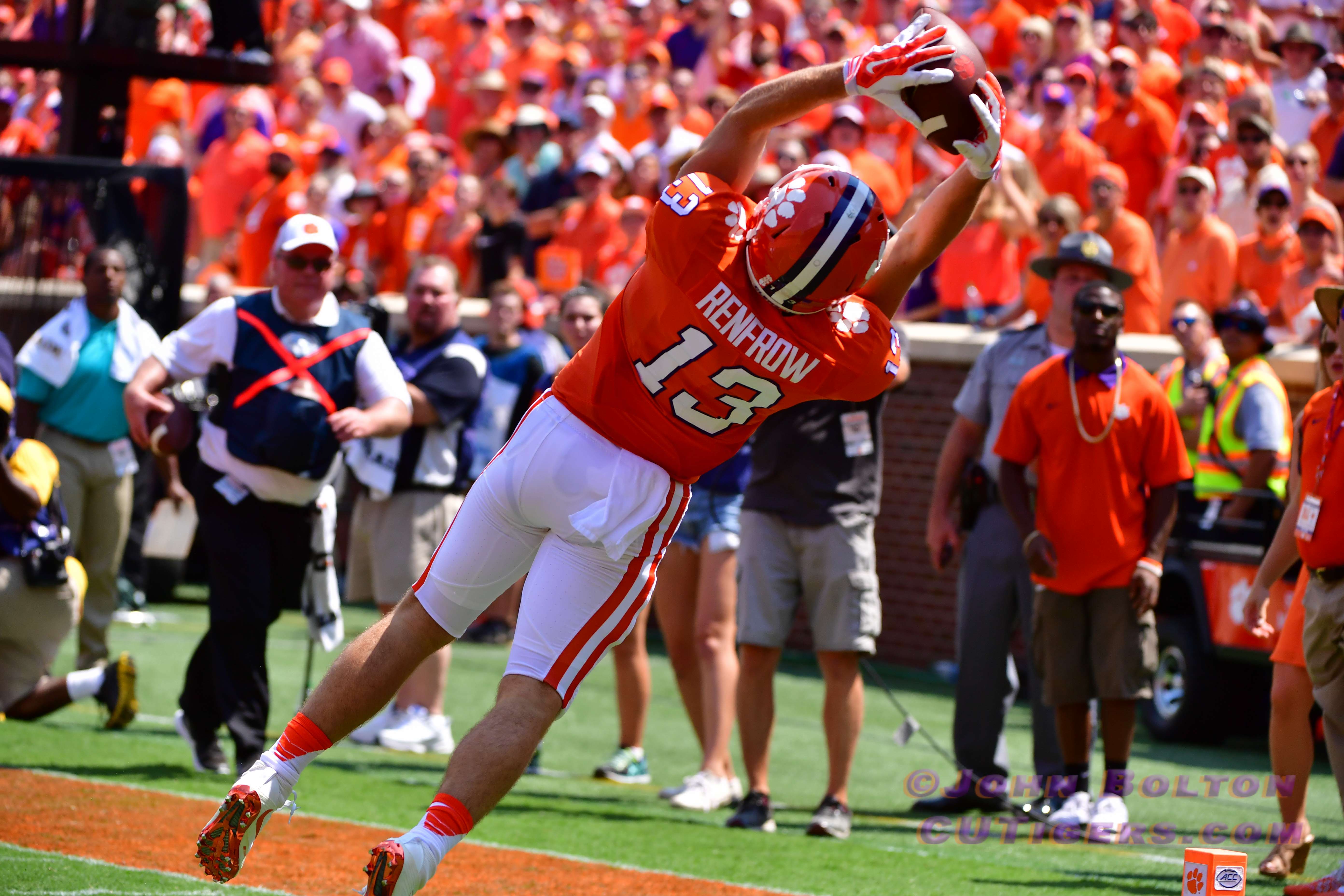 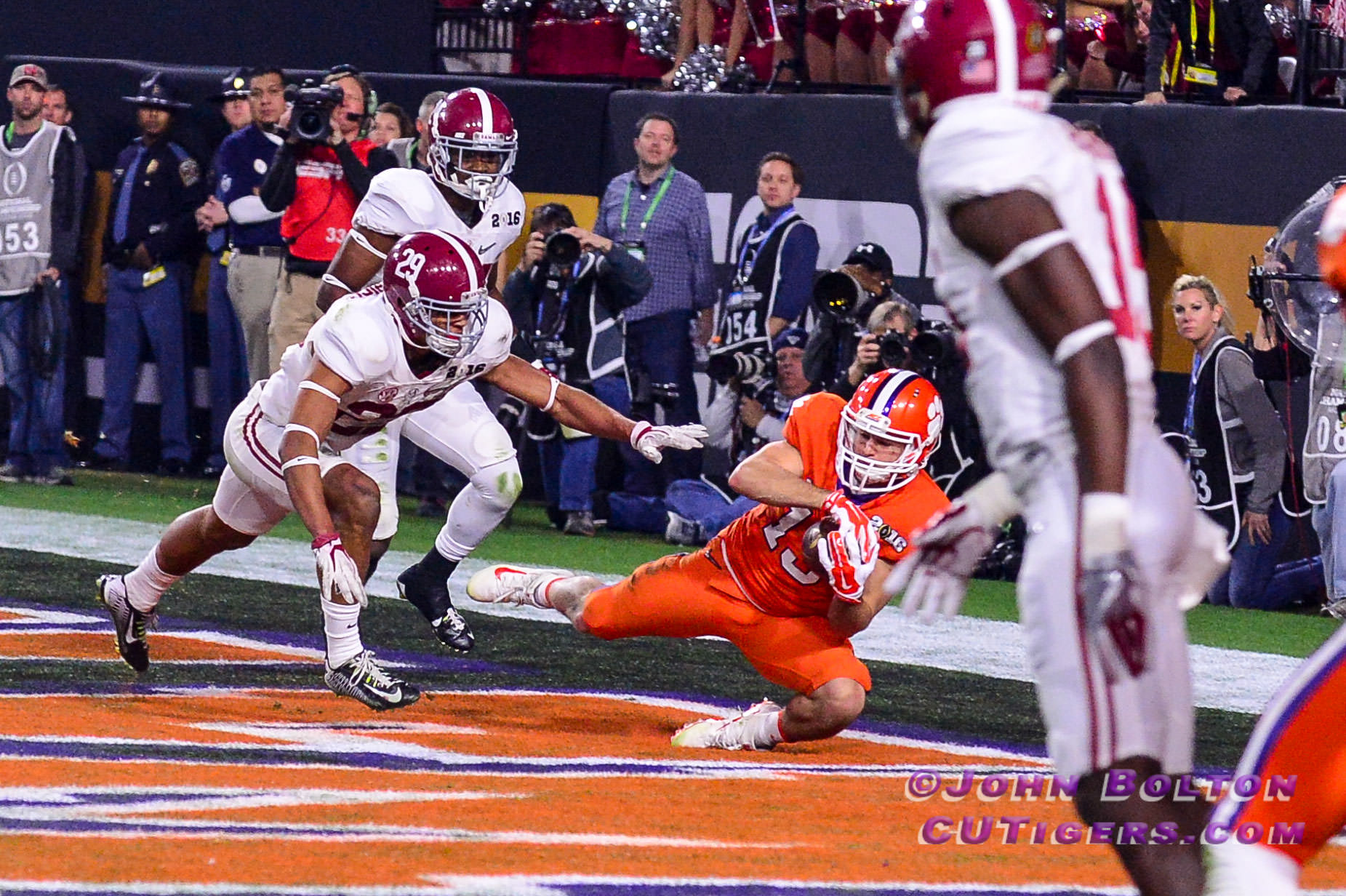 Not only is Renfrow versatile, but he is also consistent. “So dependable, so reliable – always has been,” is how Dabo Swinney describes him. Dabo also says, “When he drops one, everybody just goes ‘holy cow – he’s human.’ He’s just that consistent, and it’s amazing.” People all over the country give Hunter Renfrow the respect he deserves, regardless of whether they are a Clemson fans. Although it is hard to look past his baby face and contradicting hairline, as well as his size, they have all come to realize how phenomenal he is. Hartsville High School’s Head Coach, Jeff Calabrese, coached against Hunter Renfrow’s high school twice in the playoffs while Hunter was the starting QB. Coach Calabrese looks back at Renfrow’s high school days and says, “He looks like a banker, but in over 20 years, he and [No.1 NFL Draft Pick] Jadeveon Clowney might be the two best high school players I’ve ever seen in this state.”

Hunter Renfrow and his magic hands will go down in Clemson and College Football history after making the game-winning catch in the final seconds to beat Alabama for the 2016 National Championship. Incidentally, Renfrow is engaged to be married (sorry, ladies), and it is no coincidence that his wedding date is 4/13. The aforementioned play that won the Tigers their second national title was a pass from #4 to #13. Dabo said at his press conference on Tuesday, “Renfrow walks around, I really believe he’s Clark Kent. He looks like the most normal human being, and then he steps in that phone booth…Renfrow puts his helmet on and he’s Superman.” As if making that championship-winning catch wasn’t enough, Renfrow also put on his cape and saved the day by making a touchdown-saving tackle after an interception earlier in the game. He has kept us coming back for more ever since that catch, and even if he has a rare drop, he never disappoints. After a Wednesday night’s practice, Dabo Swinney said, “When Renfrow drops a ball it’s like ‘what just happened?’” Even though nobody can put their finger on what it is that makes Hunter Renfrow so special, the only people who will ever complain about it is those who have had to play against him. For all their 5-star recruits in the defensive backfield, even Alabama couldn’t stop Renfrow from scoring 4 touchdowns in 2 games against them. Dabo Swinney said what every Clemson fan, player and coach would love and what every other college defense in America would hate when he said, “I wish we could get a sixth year out of him.” Renfrow humbly stated that “IF” he left a legacy at Clemson, it would be that his teammates appreciate him and that they will miss him when he’s not there. Hunter Renfrow put his paw prints on Clemson and dug them deep into Frank Howard Field at Death Valley. He has left more than a legacy as he ran his way into the hearts of the Clemson Family and one of the most beautiful walk-on stories college football will ever see. A couple similar overachieving Clemson wide receivers, Tyler Grisham and current NFL star Adam Humphries, also wore the #13. But don’t be surprised if Hunter Renfrow is the last of many great players to wear that number for the Tigers.