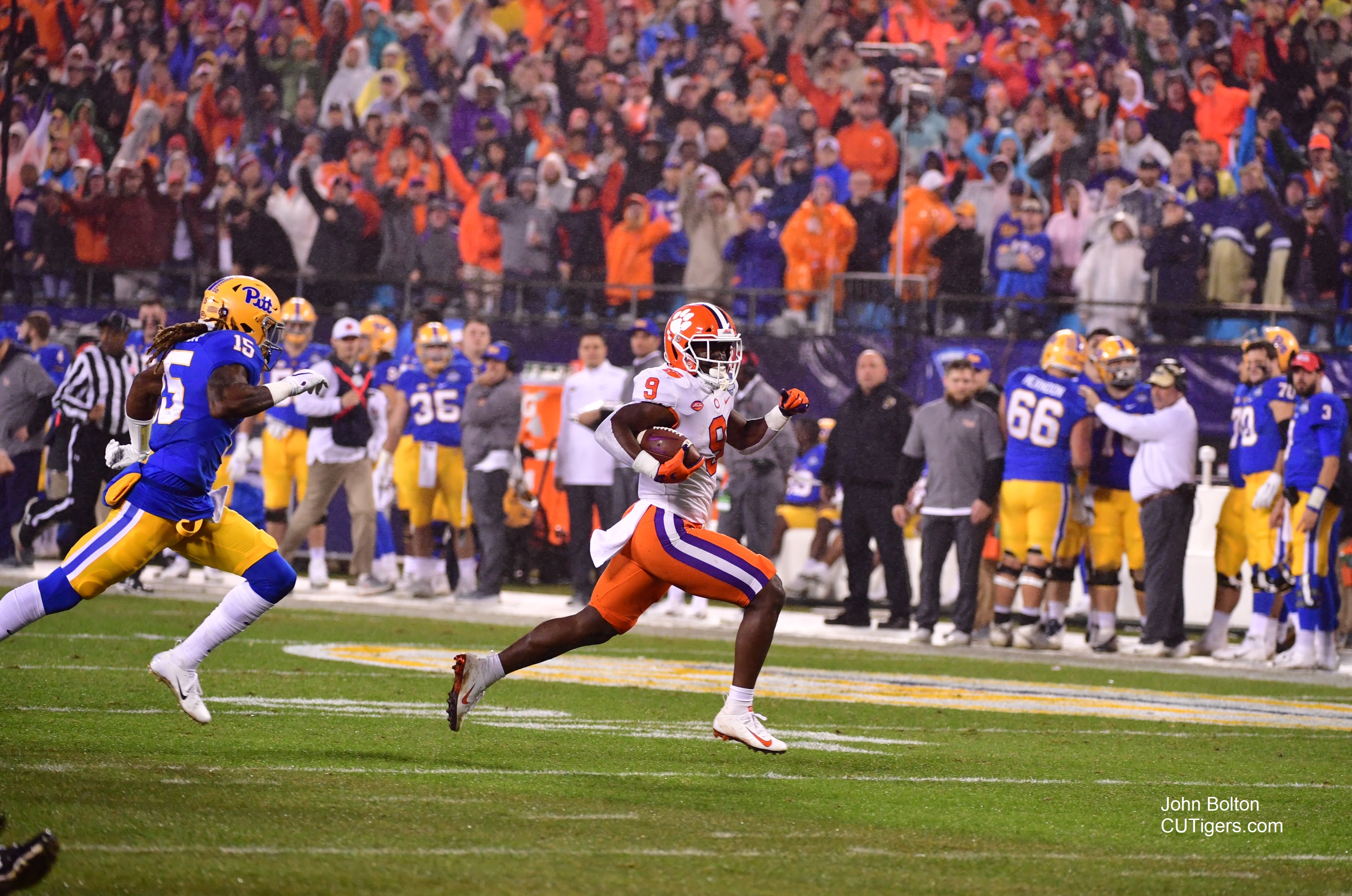 
ANOTHER CLEMSON CHAMPIONSHIP: NO.2 TIGERS RUN AWAY FROM PITT, PUNCH TICKET TO 4TH STRAIGHT PLAYOFF

CHARLOTTE, NC – No.2 Clemson continued on its collision course with No.1 Alabama for a fourth consecutive College Football Playoff showdown as it annihilated Pitt 42-10 for the Tigers’ unprecedented fourth consecutive outright ACC Title. Clemson joined Florida as the only Power Five programs to win four consecutive conference championship games, and Dabo coached against a couple of those Steve Spurrier-coached Florida teams when he was on the Alabama staff in the 1990’s.

The weather conditions were just what Pittsburgh was hoping for—it steadily rained all day and throughout the game, somewhat diminishing the wide disparity in talent and athleticism that favored the Tigers. However, ACC Player of the Year Travis Etienne made a statement on the very first play from scrimmage, bursting into the open field for a 75-yard touchdown run. It was the fastest score and longest play from scrimmage in ACC Championship Game history.

The defense also made a statement early, forcing a three-and-out on Pitt’s first possession and creating a big turnover on the second. Isaiah Simmons forced a fumble recovered in the air by Christian Wilkins and returned to the Pitt 3-yard line. Etienne quickly paid it off with his second touchdown of the quarter to put the Tigers up 14-0, and it was all the points they would need. The defense was anxious all week to redeem itself for its worst performance since the Texas A&M game in week 2, allowing 600 yards and 35 points against the Gamecocks last week. All night long, they demonstrated how anomalous that game was by dominating the Panthers’ offense. They allowed just 10 points, 200 yards of total offense and 8 passing yards after giving up 510 last week. They forced 8 three-and-outs and a turnover on downs. After forcing just one turnover in the previous three games, the Tigers forced two in the first half, and both led set up the offense inside the 10-yard line for touchdowns. In addition to the fumble return by Wilkins, A.J. Terrell collected his second interception of the season and returned it to the Pitt 10. LB Tre Lamar missed the South Carolina game with an ankle injury and had a huge night. He led the Tigers with 9 tackles, including one of their two sacks and another tackle-for-loss. The Tigers finished with 9 TFL’s.

Travis Etienne is arguably the most efficient running back in the nation, and Saturday night was no exception. He rushed for 156 yards and 2 touchdowns on just 12 carries, averaging 13 yards per. He extended his Clemson single-season rushing touchdown record to 21 and still leads the Power Five in that category. He has just one fewer touchdowns than the two players who lead the nation but has 85 less carries than one of them and 38 less carries than the other. After the game, Etienne thanked God, his family, his offensive line and his fellow running backs. It is impressive how humbly the true sophomore carries himself. He is a true superstar and will be one of the favorites to win the Heisman neat year, but as the Clemson coaches have said, he doesn’t seem to know how good he really is.

As usual, Trevor Lawrence played like a fifth-year senior rather than a true freshman. Despite the inclement weather, he made a few incredibly accurate touch passes down the field. One of them was unfortunately dropped by Tee Higgins on the sideline in the first quarter, and that led to a three-and-out. He made another magnificent throw to Justyn Ross for 32 yards in the first quarter and connected again with his fellow true freshman in the second half for 38 yards, the longest pass play of the game, on a flea flicker that went to the one-yard line and set up a touchdown. Lawrence also delivered a perfect ball on a fade route to Higgins for one of his two touchdowns. Trevor was 12-24 for 118 yards and 2 touchdowns with no interceptions. He also had a couple nice runs, including a 16-yard scramble for a 3rd down conversion, in which he juked a defender out of his shoes. For the last few weeks, I’ve been talking about how Trevor’s running ability is gradually becoming a bigger part of the offense. He rushed for his first career touchdown at Boston College, followed that up with his longest rush against Duke and then topped it again with a 32-yard run last week and a 3rd and 3 conversion. Trevor won’t run the ball a ton, but his ability to make a couple big run plays per game is the last piece of the puzzle for this explosive offense.

The Tigers only totaled 419 yards of offense, but they only had to run 59 plays thanks to the explosive plays and two turnovers inside the red zone. In fact, they had three one-play scoring drives that consumed 4 seconds, 5 seconds and 13 seconds! The 28 points scored by the Tigers in the first half matched the ACC Championship Game record set by FSU in 2014. At one point, the Tigers had 14 scoring plays of over 70 yards in their last 14 quarters played in ACC Championship Games.

Chase Brice got into the game late and posted a career-long 28-yard run. True freshman Lyn-J Dixon, who led the nation last week with 10.21 yards per carry, bounced a nice run outside for a touchdown to put an exclamation point on the game and make the final 42-10. It was the Tigers’ 8th straight win by 20 points or more, as school record, and 13th straight game scoring 27 points or more, also a school record. The Tigers have now won 29 straight Saturday games, which is a school record and the longest active streak in the nation. Incidentally, the College Football Playoff Semifinal will be on a Saturday this year!

The College Football Playoff Selection Show begins at noon ET on ESPN. It will almost certainly be Alabama, Clemson, Notre Dame and Oklahoma in that order. The only question is who will play where. Contrary to popular belief, the CFP Selection Committee makes that determination, and although Alabama and Oklahoma are closer to the Cotton Bowl than the Orange Bowl, they may put Clemson in the Cotton Bowl in order to avoid giving Oklahoma a virtual home game. I’ll have the media teleconference with CFP Selection Chair Rob Mullens posted for you around 4:30. I’ll also have our teleconference with Dabo and (presumably) Brian Kelly posted at about 6:00, so keep it right here all day!