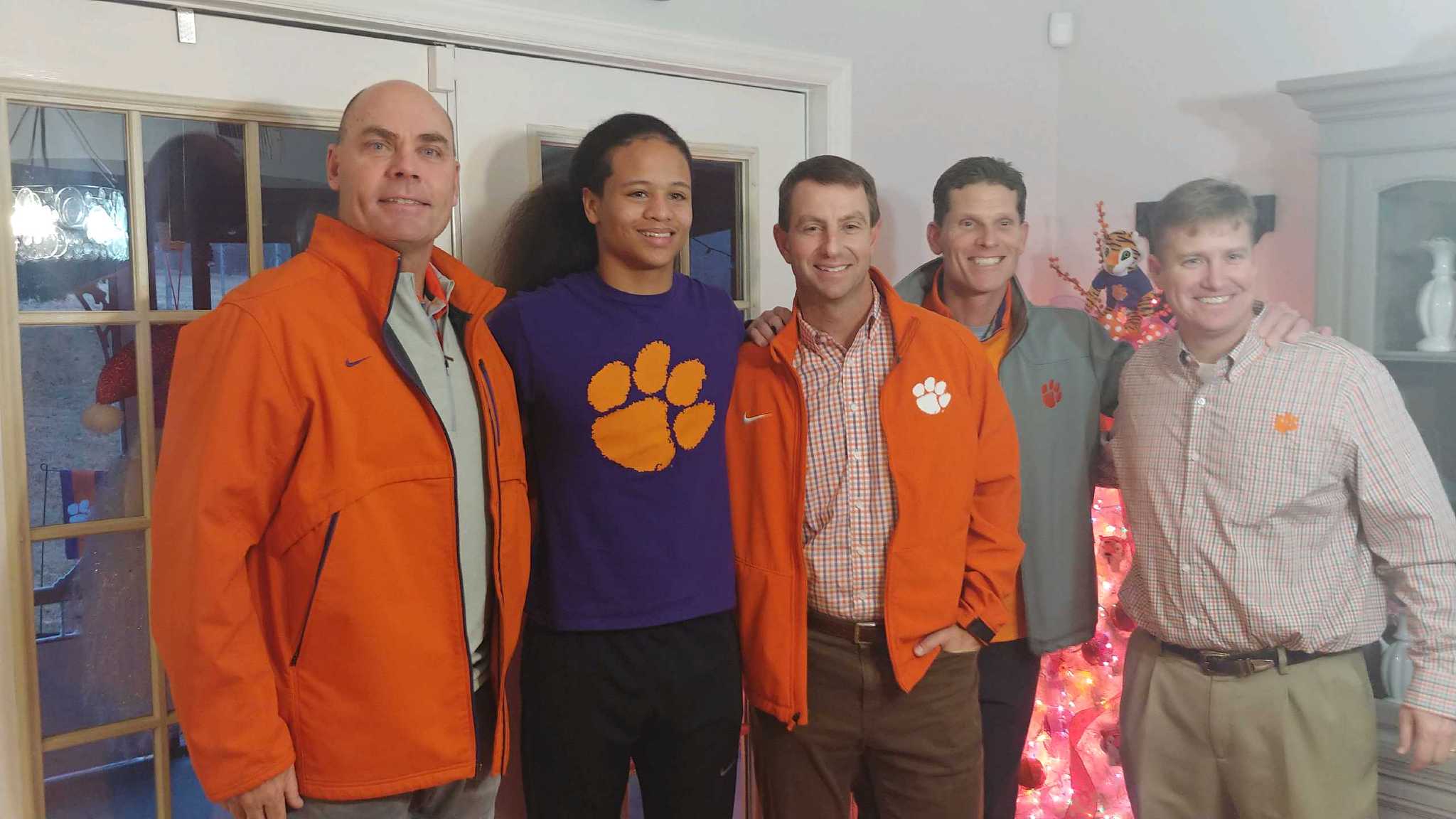 In Dabo Swinney’s tenure as Head Coach, Clemson has been ranked in the AP Poll 9 out of 10 years, been to the College Football Playoff 4 times and played in The National Championship Game twice, winning one National Title and 7 out of 12 bowl games. The Tigers have won at least 10 games in each of the last 8 seasons and are 4-time ACC Champions as of December 1st, the 10-year anniversary of Swinney being named Head Coach. Swinney won his first ACC Championship in 2011, the first for Clemson since 1991. Swinney’s current record at Clemson is 114-30, and in his 10 years as Head Coach, Clemson has sent 53 players into the NFL. A major component for Clemson’s consistent success is how well Dabo Swinney and the staff have recruited. Many youngsters have dreamt of growing up to play football for Clemson, but it’s a dream only realized by a select few. Clemson chooses its players not only based on how well they can play football, but by their character off of the field as well. One future Tiger that stood out in both of those categories is free safety Lannden Zanders.
Lannden is a senior at Crest High School in Shelby, North Carolina. Lannden started playing football when he was just 4 years old. Although Zanders was recruited by Clemson as a free safety, he also played wide-receiver on varsity, with occasional playing time at RB, QB, CB and OLB. During his two years on the varsity, Zanders played in 26 games, recording 105 tackles (69 solo), 11 interceptions, 1,424 all-purpose yards (896 receiving and 267 rushing) and 14 touchdowns. Lannden’s favorite safeties and wide receivers are Earl Thomas, Antonio Brown, and former Clemson greats Brian Dawkins and DeAndre Hopkins.
In addition to Clemson, Zanders had a wide variety of scholarship offers to choose from, including Oklahoma, Stanford, NC State, Tennessee, Georgia Tech, North Carolina, South Carolina and many others. Zanders committed to Clemson in April of his junior year. When asked about making his final decision, Zanders said, “Clemson has always been my dream school ever since I was a kid. Everything about the university brought my attention to it. The coaches and players that are a part of the Clemson Football program are also a big reason I decided to follow my dream and commit to Clemson.”
Zanders is very excited about making an impact at Clemson. He believes that his athleticism and ability to make open-field tackles will benefit the defense. He looks at playing for a coach like Brent Venables, with the defensive legacy he has built at Clemson, will be an amazing opportunity, and Lannden hopes to add on to that legacy. As much as Lannden can offer the football team, he is even more excited about what Clemson has to physically and intellectually offer him. Zanders believes that Clemson will offer him guidance in every aspect of life and a valuable degree. Zanders is definitely NFL hopeful, but he will not be upset if it does not happen as planned, saying, “I understand that not everyone is meant to play football forever, but it is a dream of mine, so of course playing pro football would be everything.” Zanders is majoring in nursing at Clemson to pursue a career in physical therapy. He wants to be able to help the world and his family as much as he can, and he knows Clemson’s academic culture will help him fulfill that goal, just as well as Clemson’s athletic culture will help him fulfill his goal of playing in the NFL.
Exactly one week after winning a fourth consecutive ACC Championship, Dabo Swinney, Defensive Coordinator Brent Venables, Safeties Coach Mickey Conn and TE/Special Teams Coach Danny Pearman took a trip to North Carolina to visit Zanders and his family. Lannden will make his pledge to attend Clemson official on Early Signing Day this Wednesday, and he plans on enrolling early at Clemson in January. Lannden had the opportunity to finish out the whole year at his high school but decided to get to Clemson early to get a head start on his college career, including spring practice and his degree in nursing. He is most excited about playing in Death Valley and winning some championships with his new teammates and coaches. During the home visit, Swinney and the other coaches told Zanders to keep being himself and to trust them in everything, and he plans on continuing to do both of those from this point on.
Zanders is eager to step foot on Clemson’s campus for good and begin a new chapter in his life. Sophomore defensive end Justin Foster went to the same high school as Zanders and has helped him immensely with his decision. Zanders is also close with freshman Mario Goodrich, who was his player-host during his official visit. In addition to Goodrich, Lannden has built relationships with several other current players, including freshmen Braden Galloway, Xavier Thomas and K.J. Henry. Zanders has become close with most of the other Clemson commits that he has met in the recruiting process as well. Before Zanders committed, Justin Foster told him all about the football program, the school and how much he loved it there, which gave Zanders comfort in his decision to commit as early as he did despite all of his other options. When speaking on the best advice he has heard from all the current players, what stood out the most was: “They told me to embrace the grind and fall in love with it. Don’t be afraid of a new challenge, and be ready for everything.” Zanders intends on taking this advice with him as he begins his journey as a Clemson Tiger on January 6, 2019.
For fun, I asked Lannden to give us his thoughts on the two semifinal games, and he is predicting a 38-15 blowout win for the Tigers and a 28-25 upset win for Oklahoma over Alabama. Should the Tigers beat Notre Dame as Lannden predicts, he will be able to watch the Tigers play for a National Championship one day after he enrolls.
ZANDERS HIGHLIGHTS: