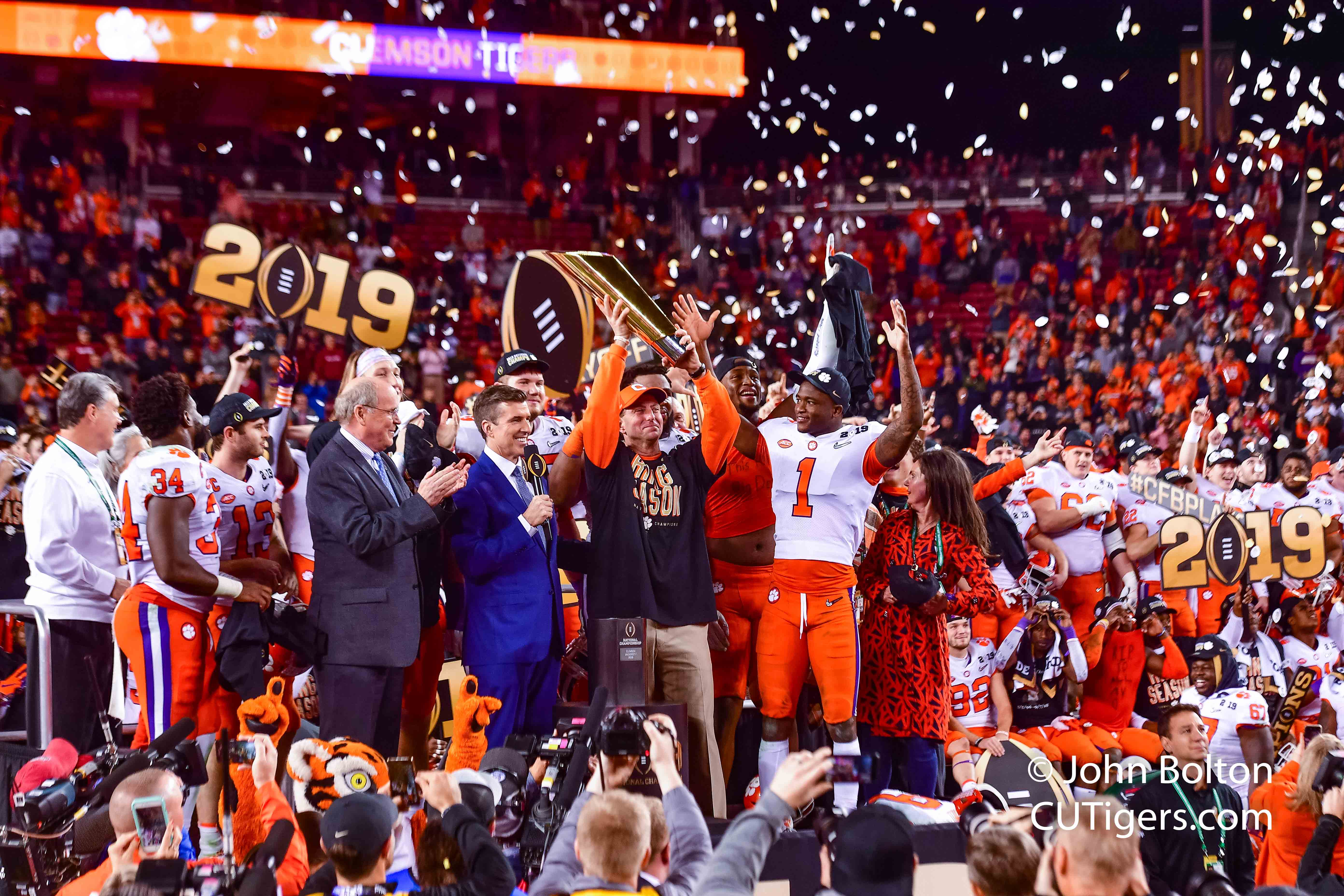 BOX SCORE
SANTA CLARA, CA - What a resounding win over the mighty Tide! Probably less than 5% of the national media was picking the Tigers to win, and no one had Clemson blowing Alabama's doors off.
Dabo evened the score with Nick Saban 2-2 and more importantly has taken 2 out of 3 from him in National Championship Games. In actuality, Dabo should be 3-0 against Saban in National Championship Games, as the Tigers outplayed Bama in 2015 but beat themselves with several mistakes. Still, Saban is now 6-2 all-time in National Championship Games with both losses coming to Dabo and the Tigers. Dabo said after the game he can't wait to turn around and do it again next year.
Trevor Lawrence was sensational, passing for 347 yards, the most against Alabama in the last two years, and he became just the second true freshman ever to start and win a National Championship Game. He had help, of course--especially from fellow true freshman Justyn Ross, who played his best two games of the season in the College Football Playoff. He made two of the best catches you'll ever see on the same touchdown drive, including perhaps the best catch ever in a National Championship Game. Travis Etienne turned in his fourth hat trick of the season, rushing for 3 touchdowns in the first half.
The defense was also superb, stifling Alabama all night in the red zone. Trayvon Mullen was Defensive MVP, coming up with a huge interception and return in the first half, and A.J. Terrell had a pick-six on Alabama's first possession to put the Tigers up 7-0. Terrell also recorded the first INT of the season for the Tigers in their fifth game.
With the monumental win, Clemson is the first program since Penn in 1897 to go 15-0. Renfrow, Wilkins, Ferrell, Hyatt, Joseph, Bryant, Huegel and the rest of the seniors go out on top, tying the Alabama seniors with an all-time best 55-4 record. Wilkins had tears in his eyes on stage during the trophy celebration. What a moment for him and the other seniors who decided to forego the NFL and come back this season!
I'll have the post-game PC with Dabo, Offensive MVP Trevor Lawrence and Defensive MVP Trayvon Mullen posted in a bit along with coach and player interviews. Stay tuned!
POST-GAME PC WITH DABO, TREVOR & MULLEN PLUS PLAYER INTERVIEWS HERE