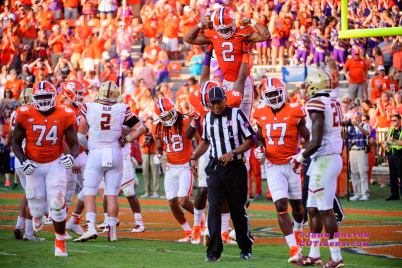 It was a slow start for the offense on Saturday, but the defense was phenomenal once again, and the offense finally exploded for 4 touchdowns in the 4th quarter, as the Tigers blew out divisional foe Boston College 34-7 and improved to 4-0 on the season. Here are my grades for the Tigers’ performance.

Players of the Game:  Travis Etienne and Offensive Line

Again, the offense took a while to score, but it wasn’t a case of three-and-out after three-and-out. The Tigers were able to move the ball fairly well but had a lot of drives stall and had lousy field position all day. Their first possession started at their 3-yard-line, and 4 of their first 6 drives started inside the 10! They had 6 possessions in the game that started at or inside the 10-yard-line, so that was a big part of the Tigers’ scoring struggles. Not only does that field position obviously force you to go further to score, but it affects the coaches’ play calling. In addition, Boston College designed its game plan to stop the pass, giving Kelly Bryant some looks he wasn’t expecting, so he and the coaches had to adjust accordingly.

Kelly was accurate for the most part, going 17-26 for 140 yards, but he was a little off the mark on deep balls, and he had a couple of unlucky interceptions. One was a tipped ball off Renfrow’s hand on a high throw, and Kelly’s arm was hit on the other throw. His only other interception this season was also a tipped ball. Dabo said that of his 4 career starts, it was probably his worst in terms of his reads and decision-making. He did, however, run the ball extremely well, rushing for 106 net yards and 2 touchdowns.

The Tigers’ backs also ran the ball incredibly well. Feaster has distinguished himself as the starter after strong back-to-back performances against Louisville and BC. His average per carry wasn’t as good against BC, going for 73 yards on 3.7 yards per carry, but he picked up a lot of “dirty yards.” Ironically, Feaster has not reached pay dirt since his only touchdown of the season in the opener, but he has been more consistent than Fuller and Choice and has earned the starting spot.

On Fuller’s first and only carry, he put the ball on the ground for the second time in 3 games, and although he was able to recover it, the coaches did not play him the rest of the game. Fuller has been and will be a valuable part of this offense, but he needs to clean up his ball security. He has scored some big-time touchdowns like the one at South Carolina in 2015 and the long TD catches against South Carolina and Ohio State last year, so the Tigers will likely need him going forward, but they have to be able to depend on him to protect the football.

Choice was steady again, scoring the big touchdown early in the 4th quarter to put the Tigers ahead 14-7. He averaged 4.3 yards on 6 carries.

But the real star, of course, was true freshman phenom Travis Etienne, who ran wild in the 4th quarter after just 2 carries in the 3rd quarter and none in the 1st half! His first touch of the 4th quarter went for a 50-yard touchdown and gave the Tigers a little breathing room with a 21-7 lead. It was his 3rd run of 50 yards or more in 3 games—he did not have a carry in the Auburn game. It was also his second consecutive game with a long touchdown run, having taken it 81 yards to the house at Louisville. Of course, he wasn’t done there, scoring another TD later in the 4th quarter. With 4 touchdowns already this season, the speedy freshman from the bayou of Louisiana is amazingly averaging better than one touchdown every 6 carries! Etienne finished with 9 rushes for 113 yards and 2 touchdowns, averaging 12.6 yards per carry. It’s safe to say you can expect to see Etienne several carries early in the game at Blacksburg on Saturday night! He is too explosive to keep on the sideline for the entire first half like he has in the first 3 games. It will also be interesting to see if he makes a difference in the kick return game on Saturday.

Hunter Renfrow had another solid game with some big-time catches. He led the team with 6 catches for 53 yards. Deon Cain only had 3 catches for 25 yards, and Milan Richard added 3 for 19. After probably the best game in his career at Louisville, Ray-Ray only had 2 catches for -1 yard against BC. He did come up with a big punt return, however.

Diondre Overton only made one catch, but it was another big 3rd down conversion, just like the Louisville game. It was a 23-yard catch in traffic on the sideline, and it set up the Tigers go-ahead touchdown in the 4th quarter. He seems to be coming into his own, and he should get a few more opportunities on Saturday in my opinion.

The offense put up 482 total yards on 84 plays, 4 over their target, rushing for a whopping 342. The Tigers were an impressive 8 of 16 on 3rd down and 1 of 2 on 4th down. They were once again outstanding in the red zone, scoring 4 touchdowns in 4 trips. The offensive line did a tremendous job in both the run game and passing game, allowing just 2 sacks. Dabo said it was John Simpson’s best game so far. And what can you say about the heady play by Taylor Hearn to not only recover the fumble but to run it for a first down! He was ACC Offensive Lineman of the Week after the Louisville game and has been a real strength this season. The Tigers out-possessed BC by about 10 minutes and had 27 first downs in the game. However, they did have 2 interceptions and put the ball on the ground 2 twice. They cannot afford to do that at Virginia Tech!

Players of the Game:  Christian Wilkins and Kendall Joseph

It was another dominant performance by the nation’s #1 defense on Saturday. They held BC to just 238 total yards on 97 yards rushing and 141 passing. Great job once again on 3rd down, holding BC to just 4 of 16. The defense only sacked the quarterback once. Quite a contrast from the 11 they had in the previous home game against Auburn. It’s not too surprising because the Eagles’ freshman QB wasn’t allowed to sit in the pocket very long, but you’d like to have seen them come up with a couple more. The Tigers also only had 6 tackles-for-loss, which is well below their average. Austin Bryant came up with the lone sack, making his total on the season 5, which is tied for 4th nationally. He added a tackle-for-loss, and Kendall Joseph, Tanner Muse, Dorian O’Daniel and Isaiah Simmons came up with the other TFL’s.

One of the best things about the effort from the defense was the fact that they created two turnovers after just one in the first 3 games. Trayvon Mullen high pointed a spectacular interception, and freshman A.J. Terrell came up with the first interception of his career. The Tigers have yet to recover a fumble this season, so it would be nice to see that change!

Player of the Game:  Ray-Ray McCloud

The big story last week was obviously the loss of Greg Huegel for the season. Alex Spence acquitted himself pretty well given the circumstances. Unfortunately, he didn’t get any field goal opportunities, so his first one will likely come at one of the toughest places to play in a nationally televised night game. He did hook the one PAT, but we’ll give him a mulligan on that. After all, even Huegel missed a PAT this season. Spence got a touchback on his first kickoff, which was good to see, and he averaged 64 yards on his 3 kicks, which was right about what Huegel’s average was. Christian Groomes also got 3 kickoffs but only averaged 55.3 yards on his. BC only averaged 20.4 yards on their 5 kickoff returns, so the coverage team remained solid.

Spiers continued his good play, averaging 48.2 yards on his 6 punts. He did put one in the end zone, though, and didn’t land any inside the 20. I noted in the What We Are Hearing last week that BC had a dangerous punt return man in Michael Walker, and sure enough he had 53 yards on 3 returns against the Tigers.

Ray-Ray had a huge punt return of his own for 56 yards, which was a big play in the game, and Etienne had one kickoff return for 26 yards. He caught the ball this time, which is always a plus!

This was kind of the type of game I was expecting more of early in the season—the defense keeping the Tigers in it until the offense could get its feet under it. I think we were all a little spoiled by the early explosive plays at Louisville, but you have to be encouraged by the way the Tigers are running the ball right now. And it’s not fair to expect Kelly Bryant to drop every long ball in the bucket—not even Watson did that. The important thing is that he’s managing the offense well, still making good decisions for the most part, and he’s running the ball extremely well. The big plays in the passing game will be there, and this offense will continue to get better and better as the season progresses. Hopefully Kelly will have his touch back on the deep ball when the Tigers go into Blacksburg on Saturday night!