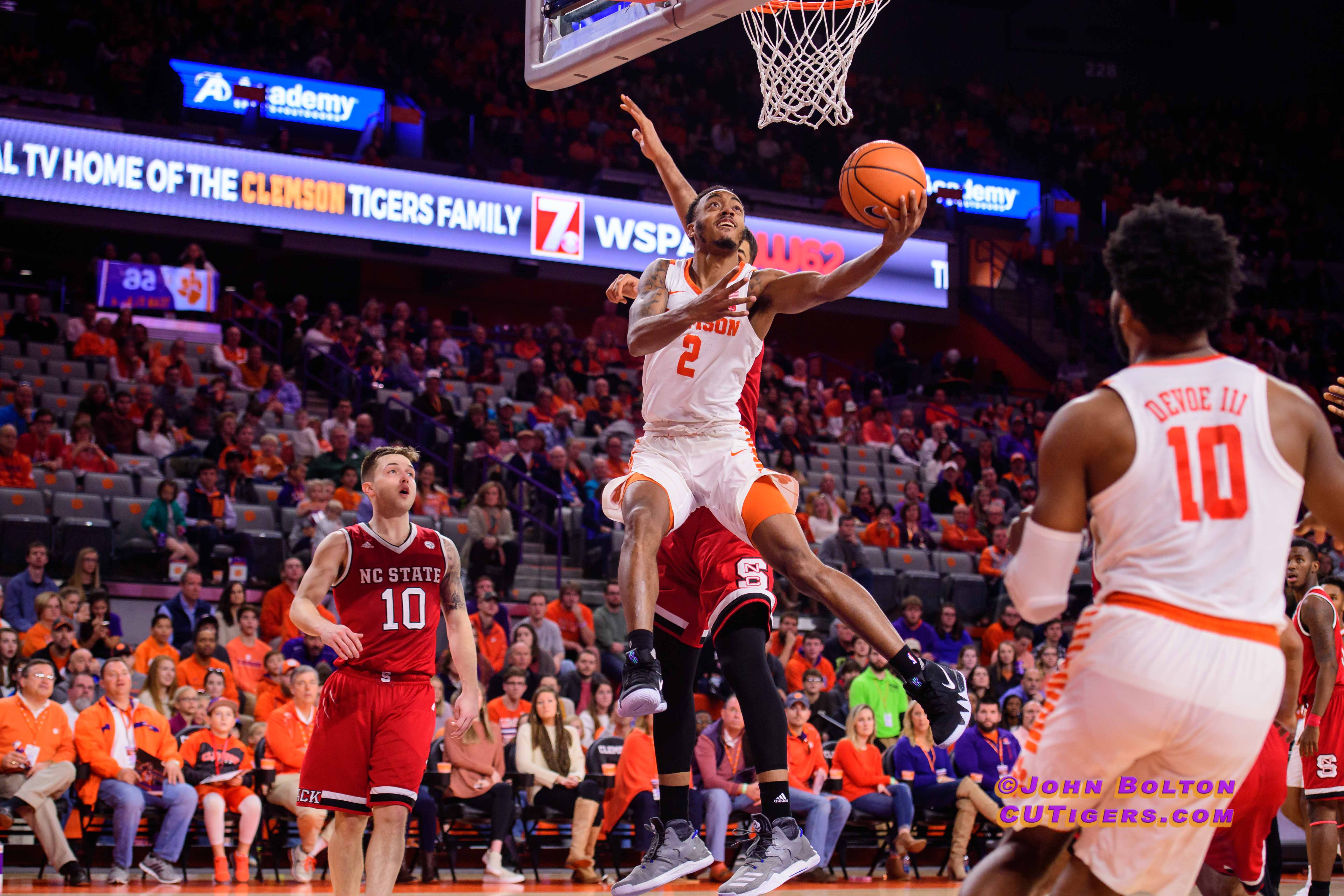 CLEMSON at #21 NC State
Tip: 2:06
TV: Raycom Sports Network (ABC local)
The Tigers are 1-4 in ACC play thanks to a brutal early schedule, and it doesn't get easier with a road game on Saturday at #21 NC State, which beat #7 Auburn earlier in the season. The tough early ACC schedule was one of the things I asked Brownell about back in October at our Media Day at the golf course, and it has been a major story line for the Tigers. 4 of their first 6 ACC games have been on the road, and 4 of their first 6 opponents have been ranked this season. One of the two unranked opponents was at Syracuse, which beat #1 Duke in Cameron Indoor Stadium. The Tigers have a much better team than their current record in the nation's toughest conference indicates, and an upset win in Raleigh on Saturday could really turn things around for Brad Brownell.
The Tigers trail the all-time series with NC State 53-102 and are 14-49 in Raleigh. Their last win at NC State was in 2015. The Tigers split with the Wolfpack last season, blowing them out by 16 in Littlejohn before losing by one in the last meeting in Raleigh. The Tigers have won 3 of their last 4 versus the Pack, going 2-0 against them two years ago, including a 14-point win in the ACC Tournament.
NC STATE SYNOPSIS
Kevin Keatts and Brad Brownell have both been Head Coach at UNC Wilmington--that was Keatts's previous stop before NC State. He's in his second year in Raleigh and has done a tremendous job with the Pack. Next to Clemson, NC State was the biggest surprise of the ACC last season. The Pack are 15-4 this season with a big win over No.7 Auburn, but they are just 3-3 in the ACC with losses at Wake Forest and at No.23 Louisville in their last 3 games, which exemplifies how difficult life is in the nation's toughest conference. A contributing factor in both of those losses was the absence of starting point guard Markell Johnson, who injured his back against Pitt and has missed the last 3 games. Sharp-shooter Braxton Beverly has been running the point since the injury, but it doesn't seem to affect his ability to score. He is coming off a 19-point game at Louisville. Johnson is expected to miss this game as well.
State has the third-best scoring offense in the ACC, averaging 85.7 points per game. The Pack are also second in the ACC in field goal percentage and third in 3-point percentage, so the Tigers will need to step up their defense--especially on the perimeter, where they have been burned several times this season. The Tigers will see plenty of full-court press from the Pack. They like to trap in the corners, so Mitchell, Reed and Trapp will need to be sharp on Saturday. State is a great rebounding team--they really crash the glass. The Pack are second in the ACC in offensive rebounds and rebound margin. Their wings--Bryce, Dorn and Daniels--really attack the basket off the dribble and are great finishers. The Tigers' opponents always seem to have their best shooting games against them, so look out for Beverly spotting up for 3's. If he gets going, it could be a long day for the Tigers. He was just 1-6 from 3 at Notre Dame and 3-10 at Wake, indicating playing point guard might have an adverse effect on his shooting, but he found his stroke in their last game at Louisville, going 5-8 from beyond the arc. State doesn't have a ton of size in the paint, but sophomore D.J. Funderburk is starting to come into his own and will be a good matchup for Eli Thomas.
CLEMSON STATUS
This will be the Tigers second straight road game against a pressing team, and I asked Brownell about his experienced back court handling that pressure at Florida State. Brownell thought his guards handled the Seminoles' pressure well for the most part. Most of the Tigers' turnovers in Tallahassee came in their half court offense. Brownell seemed to be pleased with how his team fought at FSU on Tuesday night and realized that the Noles just made some shots that they haven't made all season. For example, Nichols was about a 30 percent 3-point shooter this season but went 4-5 from the arc against the Tigers.
I asked Brownell on Thursday about State's wings and their proclivity to attack the basket off the dribble. It will be important for the Tigers' guards to keep State from getting by them off the bounce, not only to prevent layups but to prevent Eli Thomas from picking up some fouls in help defense.
I also asked Brownell about Shelton Mitchell's knee. Brownell indicated last week that he thought the wear and tear of the season is taking its toll on Mitchell's knee, which was a problem for him last year. Brownell thought the long break after last week's win over Tech helped, but that he is continuing to receive treatment and will not do as much as others between games.
This will be the first home game for NC State in two weeks after three straight road games, so it will be an amped up crowd and hostile atmosphere for the Tigers. They'll need to limit turnovers and get back in transition to avoid big momentum plays that will get the crowd fired up. An upset win could really turn the season around for the Tigers, but it won't be easy! They will need to play their best, and Marcquise Reed will need to score 20 or more. He scored a career-high 30 in the win over Georgia Tech but only scored 13 in the loss at FSU. Eli Thomas will need to avoid foul trouble and have a big game as well if the Tigers are to pull the upset.