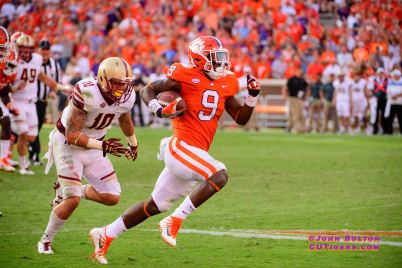 CLEMSON, S.C. – Four fourth-quarter touchdowns led the No. 2 Clemson Tigers to a 34-7 win over the Boston College Eagles on Saturday afternoon at Death Valley. With the win, Clemson remained undefeated at 4-0 overall and 2-0 in the ACC, while Boston College dropped to 1-3 on the year and 0-2 in conference play.

On offense, the Tigers were powered by the run game, as all five of their touchdowns came on foot. Kelly Bryant rushed for a career-high 106 yards and two touchdowns on 22 carries, and Travis Etienne, who ran for 113 yards and two touchdowns on nine carries. Defensively, Clemson was sparked by Trayvon Mullen and A.J. Terrell, who both hauled in their first career interceptions, and Kendall Joseph, who had 10 first-half tackles.

The Tigers struck first, breaking a scoreless tie midway through the second quarter on a 94-yard drive that was capped by a Bryant 11-yard touchdown run. That proved to be the only scoring of the first half, and Clemson took a 7-0 lead into the break. Boston College evened the score at 7-7 late in the third quarter when AJ Dillon ran in a one-yard touchdown, and the Tigers and Eagles entered the fourth quarter tied.

Clemson took the lead for good on its opening drive of the final quarter on a six-yard touchdown run by Adam Choice, set up by a 23-yard pass from Bryant to Diondre Overton on the previous play. An Etienne 50-yard rushing touchdown put Clemson up by 14 late in the fourth quarter, and Bryant scored on a four-yard quarterback keeper with just under three minutes left in the game. The Tiger offense was not done, however, as Terrell’s interception set up a 41-yard scoring drive that saw Etienne find the endzone on a 10-yard scoring run with less than a minute remaining in the contest.

Clemson will travel to Blacksburg, Va. for a matchup with the Virginia Tech Hokies next Saturday at 8 p.m.

On the Tigers’ overall performance:

“I was a little frustrated because I thought we were going to finish on a few drives early, but I knew it was going to be a tight first half. I felt like we could eventually wear them down, and we scored 27 unanswered points. And that’s what good teams do when they finish the right way in a hard-fought game. At the end of the day, you’ve got to play four quarters, and that’s what our guys did. We stayed patient. We tried not to get frustrated. We had a couple of turnovers that hurt us. But we had 368 rushing yards, which made all of the difference.”

On the critical fourth quarter:

“We had a huge turnover and a huge punt return. We had several great passing plays, and [Tavien] Feaster and [Travis] Etienne were amazing in the ground game.”

On the significance of the win moving forward:

We’re a team that’s 4-0 and we’re learning about our team every week. We’re battle-tested, and we had our nose bloodied today, but, at the end of the day, we came away with the win. This game was a challenge, but it’s going to make us better.”

On the high number of players to see action for the Tigers:

“We’re playing them. That’s one of things that we’ve committed to do. We’re going to play our guys. It’s something that we’ve got to do. It’s going to be a long season, and injuries happen. So I’m really proud of our guys for being ready. We played a lot of guys on defense and rotated a lot of guys up front. We also have four running backs that we like to play and multiple tight ends, as well. And having that type of defense can wear opposing teams down.”

On the impact of the fans at Death Valley:

“You always feel like you got a chance because of their support. They bring such great energy and do a great job. They were awesome for us in the fourth quarter, and the team rallied around them, especially on defense. I’m really proud of how we played defensively, as well as how we finished on offense. We finished strong and earned a win because of it.”

On his team’s overall performance:

“We took this team, that’s the No. 2 team in the country, late into the fourth quarter. Our kids played their tails off. That’s the storyline of the game. I thought we went after them with everything we had. I thought we made plays on offense, we made plays on defense, and I’m proud of the way our kids fought and battled against this team. This team that’s one of the best, if not the best, team and one of the best, if not the best, defenses in the country...and we had them nose-to-nose. Those are the facts.

“What I want you to hear from me is the truth, which is that we battled hard and played tough. We wanted to drag this team into the fourth quarter, and we drug them into the fourth quarter. We played with great heart and you can see the potential in this football team right now. The key right now, though, is having enough guys to come out of this thing and let that work for us. We’re hoping we’re not going to be so crippled that we’re going to have a hard time with that.”

On injuries sustained against Clemson:

“We’re very concerned right now with the amount of injuries we have and what we just took in this game. I don’t know the extent of them yet, but we’re just losing an incredible amount of starters right now. That’s a big concern that I have, and I just have to get my arms around where we are. It seems like every week, we have to restart something. I just have to figure out the extent of these things and where we are right now.”

On gaining experience from a close game:

“We were definitely tested today, but every game has four quarters. We knew this game was going to be a physical game, and we just had to stick together. It wasn’t pretty at first, but in the fourth quarter, we got it going. It was a complete game when we put it together.”

On the effort of the game:

“It is all about being able to win the game when adversity kicked in. That is a tough defense, and you have to give credit to Boston College, because they played with all they had. It took us a little time to get it going, but when we needed it, we got it. We had a bunch of guys come off the sideline and contribute.”

On having Travis Etienne as a weapon:

“A guy like that...you give him the ball, and he just runs like his head is on fire, he runs so hard. It’s fun to watch him get into space and run like that. We see it every day in practice, but in a game where the passing game isn’t clicking, it’s huge to have him on your team.”

On being able to finish the game:

“We didn’t come out hard, and getting off to a slow start always puts you back, but as I’m sure you’ve heard all day, a game has four quarters, and we were able to get it done.”

On the confidence gained from making a big play:

“It definitely feels good to have the trust of the coaches in big situations like that. I’m glad I got the opportunity to show them what I can do for this team in times like that.”

On the mechanics of the long drive downfield:

“They manned up in man coverage, and any time you see that, it’s a great time for the outside receivers to get the ball in their hands. I just got a good clean match up and was able to make the play that needed to be made.”

On what he takes from contest that is a tie ball game:

“I learned a lot about teammates, offense, defense and special teams. It was a tough game from the first through the third quarter. We really opened it up in the fourth quarter. We will take the experience of a tough game, a team that is physical, that has good players and is well coached. It’s one of those games that you will be able to look back on later in the season and say that we have been here and help us build confidence later in the season.”

On where the defense stands four weeks into the season:

“I think we are in a good place, but there is so much room for us to still improve. We played great today, but we made a lot of mistakes that people don’t notice, but the coaches see it and we know it. I’m looking forward to getting back to work this week...looking at the film and seeing the good spots and the bad spots and correcting those for our big matchup this weekend against Virginia Tech.”

On the conversations among the defense when offense is struggling early on:

“We’re really just focusing on us, because we can’t control what the offense does. All we can do is try to stop other teams from scoring. When they were struggling, we were just ready to play...everybody was having fun playing, and everybody wants to play. We’re out there, so let’s go play.”

On it being a tie ball game in the fourth quarter:

“We just know how to respond to adversity...the outside expectations were for us to blow them out. We knew who Boston College was...it’s a team that has a lot of pride and is real physical and real tough. For us to just stay with it, and not point fingers and not get discouraged but just keep playing hard, we knew we would end up pull out the win.”

On how the players played against Boston College versus Louisville:

“I think we played a lot more physical. We will definitely see the tape, and there will be plenty of mental errors that coach Venables always finds. I think as a collective unit, being able to hold their rushing game to a low and they take pride in that, is really huge for us.”

On how his own game has grown:

“I think it has grown pretty good. For me, understanding my whole defense and having to move positions, I really have to grasp what is going on around me. For me, I am just trying to be a leader, bring it hard in practice every week.”