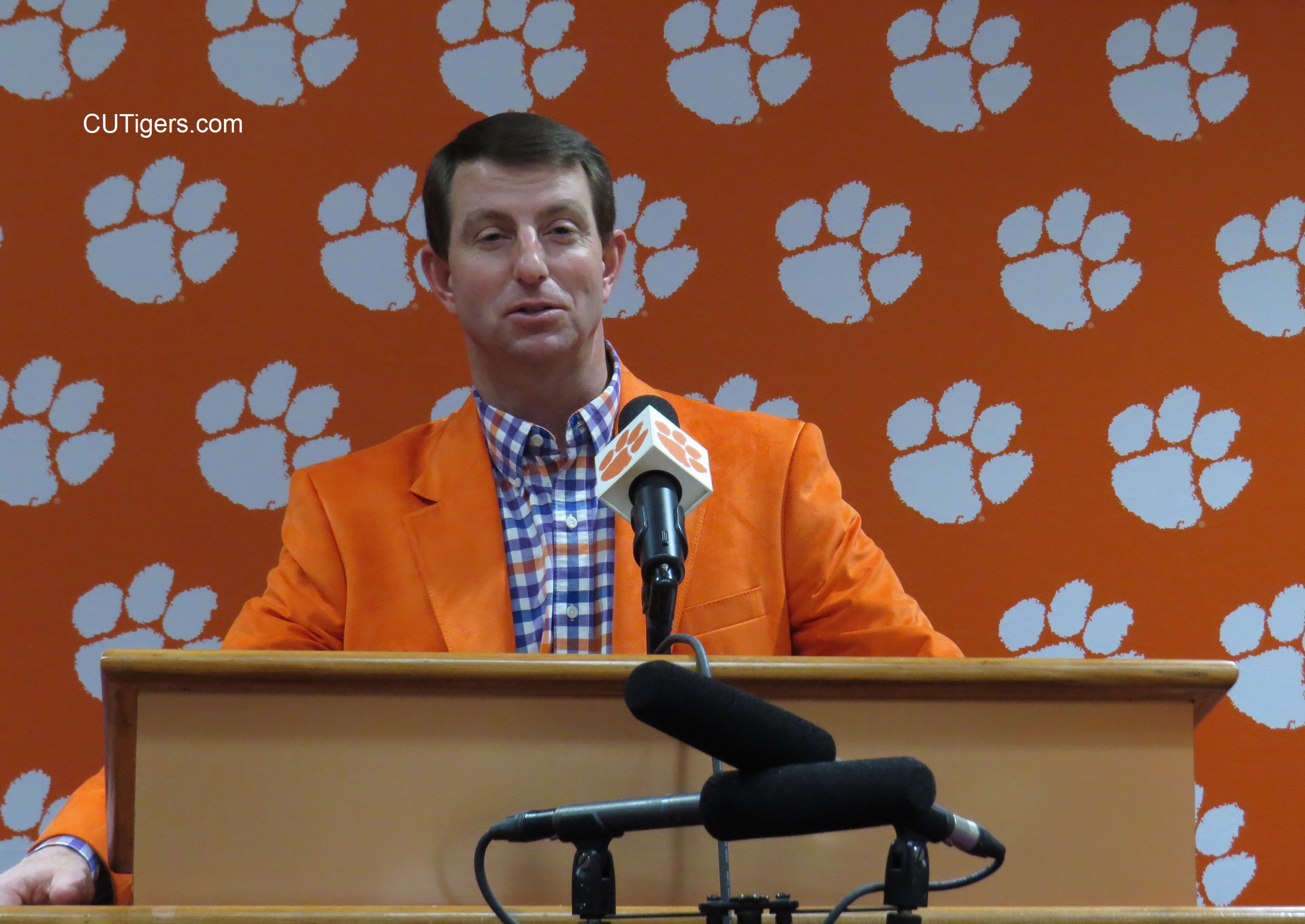 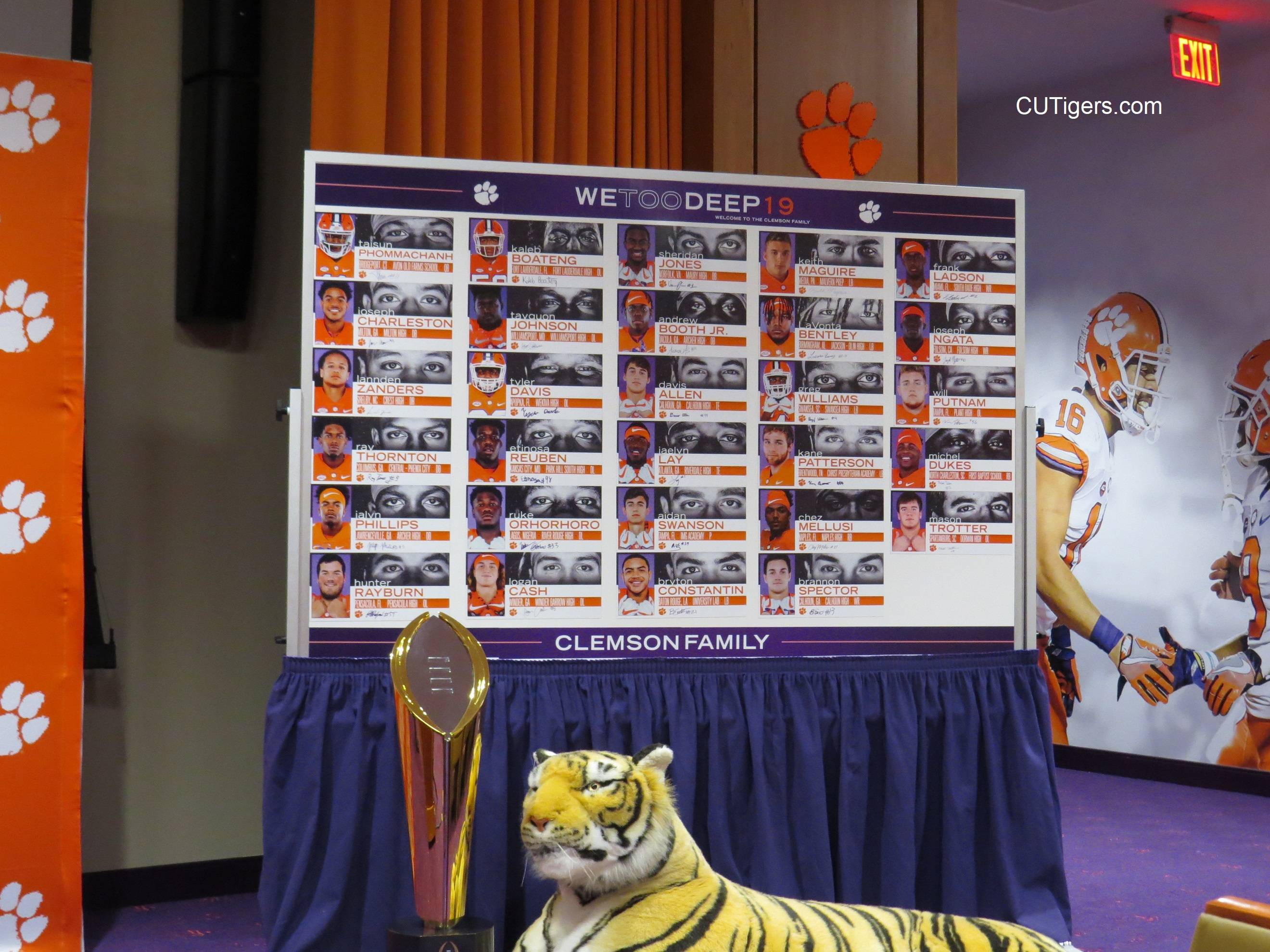 CLEMSON, S.C. — In the old days, there used to be a lot of drama in Tiger Town on National Signing Day in February. Clemson students, alums and fans would wait on the edge of their seats to see if a high-profile recruit like C.J. Spiller would sign with the Tigers. Those days are seemingly long gone, as NSD has become somewhat anti-climactic for Dabo and the Tigers as their success on the field and national brand have grown exponentially in recent years. With an increased trend toward early commitments and now the addition of an Early Signing Day in December, most of the hay is in the barn well before February, and that's just the way Dabo Swinney, Brandon Streeter and company like it.

The Tigers signed a school-record 27 scholarship recruits on Early Signing Day in December and added just one more, 3-star RB Michel Dukes from North Charleston, on NSD Wednesday. He had announced his commitment to the Tigers last week. They also extended a gray shirt to OL Mason Trotter from nearby Dorman High School. Like Cade Stewart, who started a couple games on the offensive line last season, Trotter will come in as a walk-on and receive a scholarship at a later date. That was the only real National Signing Day news from a recruiting standpoint for the Tigers. They were in the mix for 5-star RB Jerrion Ealy from Mississippi, but those in the know were expecting him to sign with his home town school, Ole Miss, and the late commitment from Dukes seemed to reinforce that expectation. Even if he had signed with the Tigers, Ealy is projected to be a top-20 pick in this spring's MLB Draft, so it is unclear whether he will even play college football at this time.

The Tigers welcomed a couple notable preferred walk-ons to the Clemson Family in twin  brothers Jake and Tye Herbstreit, sons of ESPN personality Kirk Herbstreit. Tye is a WR and Jake is a DB. I talked to Kirk about a month ago before the National Championship, and he described the decision process to me, saying that his boys were fully brainwashed Ohio State fans, but after talking to Dabo, they completely bough into his vision and the culture at Clemson. I asked Dabo to talk about their recruitment today, and you can watch his response below.

The Tigers have a school-record 17 mid-year enrollees on campus right now, and Dabo is very excited about them. He said he has not been able to spend much time with them yet because of all the travel he's had to do, but the early returns from the staff have been very positive. As for the returning players, Dabo had a few notes of interest for us. He said that defensive tackles Nyles Pinckney and Jordan Williams will both miss the entire spring. Pinckney has a slight tear in his pectoral, and Williams had to have a screw put in his leg. Also, DE Logan Cash had a surprise appendectomy, but he should be ready to go for the spring next month. With all the departures on the defensive line and now Pinckney and Williams out for the spring, it will be very interesting to watch the freshmen compete. The only returning player on the interior this spring will be Xavier Kelly, who moved over from end last season and has little experience. Finally, Dabo did not have an update on the NCAA appeal for TE Braden Galloway. He said it is a long process and is still ongoing. Dabo said that they are not expecting Garrett Williams to return next season. He will be with the team this spring but is leaning toward foregoing his final year of eligibility to join the military. So depending on what happens with Galloway, true freshman Jaelyn Lay could be thrown in the fire immediately.

Our NSD press conference with Dabo and Recruiting Coordinator Brandon Streeter is below, along with bios for Dukes and Trotter followed by notes on the 2019 class.

Congratulations @tye_h19!
So proud of you!
You’ve worked SO HARD for this opportunity. We couldn’t be happier with your choice to attend Clemson and to be a part of such an incredible program and more importantly such a special culture! https://t.co/geSJcskpio

What a big day for you @jake_herbie02!!
Can’t begin to tell you how proud we are of you—Your hard work and dedication has paid off with this incredible opportunity! Couldn’t be more excited for you to join the Clemson program. Good luck and we love you!
Go Tigers!! ???? https://t.co/qYutbVwp08

In High School: Ranked by 247Sports as one of the top 50 running backs in the nation and as the No. 13 player at any position in South Carolina … rated by Rivals.com as the No. 21 player in the state … considered the No. 17 player in South Carolina by ESPN.com … PrepStar All-Atlantic Region selection … concluded prep career with 685 carries for 8,762 rushing yards and 117 rushing touchdowns as well as 34 receptions for 743 yards and nine receiving touchdowns … led his team to an 11-2 record and a state runner-up finish as a senior in 2018 in the school’s first season in AAA … rushed 188 times for 2,030 yards with 29 rushing touchdowns and caught 11 passes for 136 yards with two receiving touchdowns in 2018 … won Lonnie Robinson Memorial Award as SCISA Player of the Year and shared All-Lowcountry Player of the Year honors … notched 335 rushing yards in his penultimate high school game, a win over Porter-Gaud in the SCISA AAA semifinals … helped team to SCISA AA titles in 2016 and 2017 … played his high school football at First Baptist School for coach Johnny Waters … primary Clemson recruiter was Tony Elliott … will enroll at Clemson in the summer of 2019.

In High School: Three-year starter who started 41 career games for Dorman … two-time all-area selection by the Herald-Journal, helping his team to back-to-back Region II-AAAAA titles … earned second-team all-state honors from USA Today … guided team to an 11-2 record and a berth in the third round of the SCHSL AAAAA playoffs as a senior in 2018 … credited with a team-high 27 pancake blocks that year in helping his starting running back produce 1,720 yards and 19 touchdowns … as a junior in 2017, recorded 28 pancake blocks and led an offensive line that helped produce three 1,000-yard rushers en route to a state championship berth … ranked among the top 75 recruits in South Carolina according to 247Sports … participated in the Shrine Bowl … played for coach David Gutshall at Dorman … high school teammate of Clemson quarterback Ben Batson and offensive lineman Jordan McFadden … primary Clemson recruiters were Robbie Caldwell and Jeff Scott … plans to enroll at Clemson in the summer of 2019 with intent to grayshirt.

Included below are additional notes on the 29 football student-athletes signed by Clemson this year: