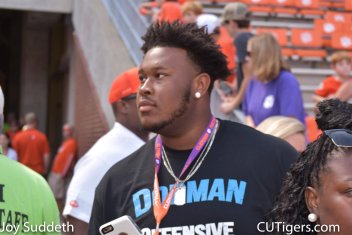 Clemson took on Boston College on a hot, late-September afternoon on Saturday in the confines of Death Valley, otherwise know as Memorial Stadium.  The Eagles and Tigers fought hard through 3 quarters of football to finally see the Tigers pull away in the fourth quarter on their way to a 34-7 win over the Eagles.

Along with over 82,00 Orange-clad Clemson fans, some of the best local and regional prospects in the 2019, 2020 and even the 2021 recruiting classes were in attendance, as were a few players from this year's 2018 haul.

The day's list was headlined by current Virginia Tech commit and in-state offensive line star Jordan McFadden, who was in Tiger Town with his family to check out the ACC Atlantic matchup. McFadden, who just recently picked up an offer from the Defending National Champions, was being given the Orange Carpet treatment from the staff, as Jordan and his family were shown all over the facilities and escorted onto the turf of Frank Howard Field to see what Clemson has to offer.  Currently still committed to VT, McFadden and family are starting to waver on the pledge to VT according to our sources, and Clemson is starting to gain speed in the recruitment of the big-time Dorman Cavalier. The Tigers' domination of the Hokies in Blacksburg could only intensify it!

Also in attendance was 2019 WR prospect Trey Knox out of Tennessee. Knox is a player the staff has been trying to get on campus for quite some time, and finally the chance arose to show Knox the attention the staff felt he deserved.  Bringing him in on the BC game allowed the staff to put the needed time in and let Knox know he is a priority to this staff's 2019 haul for WRU.  As we reported in last week’s radar, we expected an offer to be disbursed during his visit and, as predicted, the staff initiated the offer to Trey.

Trey Knox picked up an offer from Clemson during his visit for the Boston College game (Photo: Joy Suddeth CUTigers.com)

A few Clemson commits were also in attendance. BT Potter, the Tigers' 2018 kicker and local TE commit Braden Galloway from Seneca, along with LB Jake Venables, all represented the Tigers' next signing class on campus Saturday. We saw Potter hanging out with McFadden and his teammate, Dorman QB Ben Batson, the son of Clemson Strength and Conditioning Coach Joey Batson.

Jordan McFadden leads the parade of recruits up The Hill for The Most Exciting 25 Seconds in College Football (Photo: Trevor Groves CUTigers.com)

Clemson recruits climb up The Hill for the Most Exciting 25 Seconds in College Football (Photo: Trevor Groves CUTigers.com)

Clemson has done well when mining the Metro Atlanta area in recent years when it comes to defensive back talent.  Names on the current roster include Ryan Carter, A.J. Terrell, LeAnthony Williams, all from the “ATL."

Another player to hail from this area of the Peach State is current commit Kyler McMichael, a player who the Tigers covet as a large cornerback in the Brent Venables scheme.  Over the past 3 recruiting cycles, Clemson has systematically gone after more versatile and taller defensive backs. The Tigers like to be able to place their DB’s in the box as nickel backs and cross-train them at safety.  Consequently, the staff has chosen to go with the bigger, lankier bodies, with big wing spans and long range to fill these roles. Look at past defensive backs like NFL star Jayron Kearse as an example.

McMichael checks all the boxes that the Tigers' DB coaches are looking for in a prospect.  He's a versatile player that plays both ways in high school and is known to really bring the wood when he has to play on the defensive side of the ball.  Kyler is also is blessed with speed and the ability to spin his hips and roll into coverage with ease. For a player of his current size and expected growth inside of Clemson's strength and conditioning program, he’s just what the doctor ordered if you are Coach Brent Venables and his staff.

Clemson reached into the Volunteer State and offered vaunted 4-star WR Trey Knox out of Murfeesboro, TN. Knox has a who’s-who list of offers at present with the Tigers throwing one in with the likes of Alabama, Ohio State, Auburn, Tennessee, Florida, Louisville and LSU, to name a shorts list, to go along with a host of ACC and SEC schools.

Knox just attended the Clemson vs Boston College game and picked up the Clemson offer while on the visit to Tiger Town.  It's an offer Knox coveted coming in and one that will play out going forward, as Knox has reciprocal interest.  Stay tuned, as this one will heat up fast for the big-time wideout from over the hill in Tennessee, just short of the Nashville area.

Stay tuned to CUTigers.com for all your Clemson recruiting info, especially on Knox as the Tigers heat up the trail to Murfeesboro in the upcoming weeks and months in their recruitment of this intriguing 2019 prospect!

I'm truly blessed to say that I have received an offer from Clemson University #ALLIN @coachski_  @coach_jeffscott pic.twitter.com/304HBI3tMT

I'm truly blessed to say that I have received an offer from Clemson University #ALLIN @coachski_  @coach_jeffscott pic.twitter.com/304HBI3tMT

Coming sooner than you know ?? pic.twitter.com/iui0hfiLEt

Thankful that @GregHuegel is alive and well after a successful surgery pic.twitter.com/ijotX3Jg5b

This kid is a freshman, people. #ALLIN ???? pic.twitter.com/kMuCHjp6Vc

Had a great time practicing with the clemson-central rec football teams during the off week! pic.twitter.com/7x53k1arjO

You’re not going anywhere against this #Clemson defensive front.#ALLIN ???? pic.twitter.com/LAuoRmuv0Y