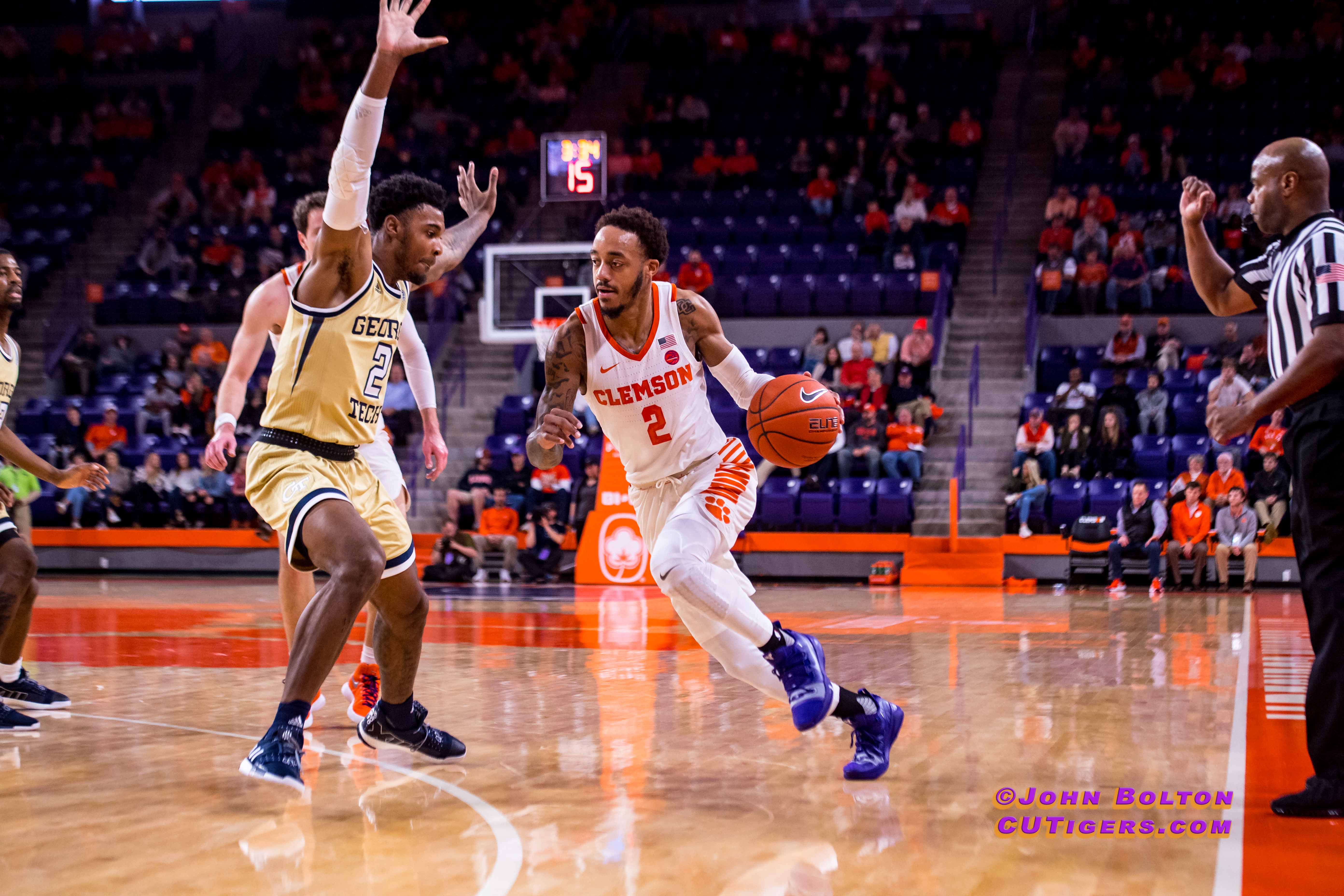 Brad Brownell continued his dominance over rival Georgia Tech, as the Tigers won their 7th straight over the Jackets, and Brownell improved to 15-4 against Tech. The 65-42 final was the Tigers' third straight blowout win since the devastating buzzer-beater road loss at No.21 NC State nearly two weeks ago, and it marks the first time the Tigers have beaten three consecutive ACC teams by double digits since the 1974-75 season! It was also the Tigers' first ACC road win.
The Tigers led nearly throughout on Wednesday night despite early foul trouble for Eli Thomas. Two of the fouls on him were questionable, and he played just 17 minutes as a result. Eli continued his stellar defensive play, however, managing to block 5 shots in his 17 minutes, and a 6th block was one of the questionable foul calls. Thomas had 7 blocks in the Wake win on Sunday. Marcquise Reed had a big second half, finishing right on his season average at 19 points with 3 steals. However, Reed's cold 3-point shooting continued, as he was 0-4 from beyond the arc, and the ACC's leading free throw shooter was 1-4 at the charity stripe. David Skara had his best offensive game in weeks, scoring 13 points. It was his first-ever double-digit ACC game. Simms found his stroke from outside, going 2-4 beyond the arc for 13 points.
The big story of late for the Tigers has been their defensive improvement. The Tigers came in dead last in 3-point defense but held Tech to 4-12 from beyond the arc. The Tigers allowed just 23 first-half points against Pitt, 37 total points against Wake and now 42 points at Georgia Tech. This group has always been offensive-minded, and Brownell has challenged them over the last couple years to play better defense. It looks like they are finally starting to embrace that philosophy, led by Eli Thomas. The Tigers are now 14-8 overall and 4-5 in the ACC setting up a huge home game against No.11 Virginia Tech in Littlejohn on Saturday. If the Tigers can pull off the upset, they will amazingly be .500 in the ACC after the 1-5 start and knocking on the door of the rankings.

Notes: Clemson won its third league game in a row … it marked the first time that Clemson has won three-straight ACC games by double digits since the 1974-75 season … the 23-point victory margin was the fifth-largest in an ACC game in Clemson history … combined with allowing just 37 points to Wake Forest on Feb. 3, after allowing 42 to Georgia Tech, it marks the fewest points allowed in back-to-back league games in Clemson history … Clemson has now won seven games in a row in the series with Georgia Tech and earned the program’s 26th road victory at Georgia Tech … in three of the last four halves of basketball the Tigers have held its opponent to 20 points or less … Brad Brownell improves to 16-4 overall against Georgia Tech … the win was the 163rd career victory for Brownell at Clemson – leaving him just 14 shy of tying Cliff Ellis for the most all-time … the win signified the 44th time Clemson has held its opponent to 50 points or less under Brownell and the second time in as many games … the Tigers are 42-2 in those contests, including having won their last 23 in a row … Elijah Thomas swatted five more shots against Georgia Tech – giving him 12 blocks in the last two games and 151 (10th all time) for his Clemson career … he is averaging 1.86 blocks per game in his Clemson career – tying him with Trevor Booker (2006-10) for fifth all-time in program history … Thomas corralled six more rebounds to give him 544 for his Clemson career – leaving him 60 rebounds shy of tying Horace Wyatt (1978-82) for 25th on Clemson’s all-time list … Marcquise Reed turned in his 59th career double-digit scoring game at Clemson – leaving him 11 shy of tying Larry Nance (1977-80) and Butch Zatezalo (1976-70) for 16th all-time … with his 19-point effort, Reed now has 1,244 points in his Clemson career – good for 22nd all-time in program history … Reed came away with three steals against Georgia Tech and is now tied for 15th all-time in program history with Bobby Conrad (1976-80) with 141 career steals … his 1.62 steals per game in his Clemson career ties him with Derrick Forrest (1988-90) for fifth all time.

“I thought we played very well today. Obviously, I thought defensively we were very locked in and played with great energy. The activity level was high. I didn’t think we gave them anything easy. Offensively, I thought we had spurts when we were very good tonight, and there were a couple spurts when we weren’t. I thought we started the game in a good place. The beginning of the second half we struggled a little bit, but we found our rhythm in the middle. We played through Eli [Thomas’] foul trouble which is hard for us to do sometimes so that was good to see. Just a well-played game by my team. I thought we came in here with a pretty good plan and our guys executed pretty well.”

“I think Georgia Tech is a physical team. I think they defend really well. Their inside guys are big and strong and hard to deal with. Our guys are older and more experienced, so they’re not afraid of that. We like to think we play pretty hard as well and are pretty competitive and physical. Our rebounding was pretty good tonight. I thought our first-shot defense was great. In the first half, we had a couple times when we didn’t rotate down and block out the center when our center was helping on a drive, but that improved the longer the game went. Our guys just kind of hung with it. They do a nice job of mixing man and zone and trying to keep you out of rhythm. We finally got into a better rhythm in the middle/end of second half and that’s when we pulled away.”

“Hopefully, it just builds confidence as much as anything. It’s not easy on players and this is an unforgiving league. You can have a great week of practice, play two games against very good teams and play well and lose. That’s not easy when you’re coaching to keep the guys’ morale going. I’m proud of our guys. We have an older team with some pride, so I think when we were 1-5 our pride took over. Now that we’ve won three in a row we feel a little better about who we are and how we’re playing. We just want to continue that. The best way to do that is to have really good practices and we’ve had really good practices throughout most of the ACC season.”

On the play of Clemson’s defense recently:

“Our guys have really bought into what we’re trying to do. Our margin for error is… we’re not one of the highest scoring teams in the league. We really have to click on all cylinders defensively and make it hard for people. We had an unbelievable first half against Pitt and not a very good second half. We defended Wake [Forest] well and we defended tonight very well. We understand that playing that way gives us a much better chance to win. Hopefully our guys are going to continue to do that.”

“Getting back in transition. Being physical and doing what we could to make them uncomfortable in the rhythm and flow. They do a really great job of turning their offense over on you. If you’re not careful, you give up layups. Whether it’s a back cut, a cut off a post… we just wanted to make sure we took away the layups and make them make plays.”

“I want to give Clemson credit, obviously, they are great. They’re a very good basketball team. Secondly, I don’t have the answers as why we’re struggling offensively. Clemson has 60 with a minute to go and maybe we’re not winning but it should be 60-57. We just can’t keep scoring in the 40s. It falls on my shoulders because I am the head coach. We shoot about as much as we can shoot in practice and after practice. We bring them back at night to shoot. It’s hard when Jose [Alvarado], for the last 20 shots, is 1-20 and again, I’m not blaming him or Mike [Devoe], or anybody. We need scoring. We are struggling with our guard spot right now. We have to figure it out there is no time to feel sorry for ourselves.”

On if the scoring woes have become a mental problem:

“I think it’s seeping in. Again, we had 24 points in the first half. You can’t do that, we are in the ACC. We have to figure it out and yes it could be mental and it’s a fine line so I’m trying to be honest with the guys but I’m also trying to positive. In a sense, you’re trying to do both because a lot of it is a mental thing. James [Banks III], we can’t miss an and-one. You miss the and-one and we only get one point out of it. And the bottom line is our guards have to help us. We can’t have Jose go 1-20 in the last two games. That obviously makes it really hard. This is men’s college basketball, we have to be tougher than that.”

On the scoring struggles against Clemson:

“We had that stretch in the first half where we couldn’t score again. And we had a long stretch in the second half where you can’t score. Eventually, it sucks the life out of you defensively. It should be a ballgame. We may not be winning but it should be 60-57 or 60-56. And it’d be different if it was just one game but this has been a regular occurrence for us, every game with offensive situations. It’s on me to figure out a way for us to score more to help us wins games.”

On rebounding against zone defense:

“They scored in the first half off of second chance. I went small in some areas in the first half and that hurt us because I tried to go smaller for offense. And that hurt us on the glass, not having James [Banks III] and AD [Abdoulaye Gueye] together. We’ve been really good on the glass – you look at the last few games with those two in – but the problem is, offensively, you get a little bogged down. We turned down a lot of open threes to shoot contested shots and I’d rather have us shoot the threes. We’ve talked about it and I’ve told the guys, “If you’re open, shoot it.’ First look is to punch inside, second, if you’re that open, you have got to keep shooting it. This is big boy basketball and we have to figure it out.”