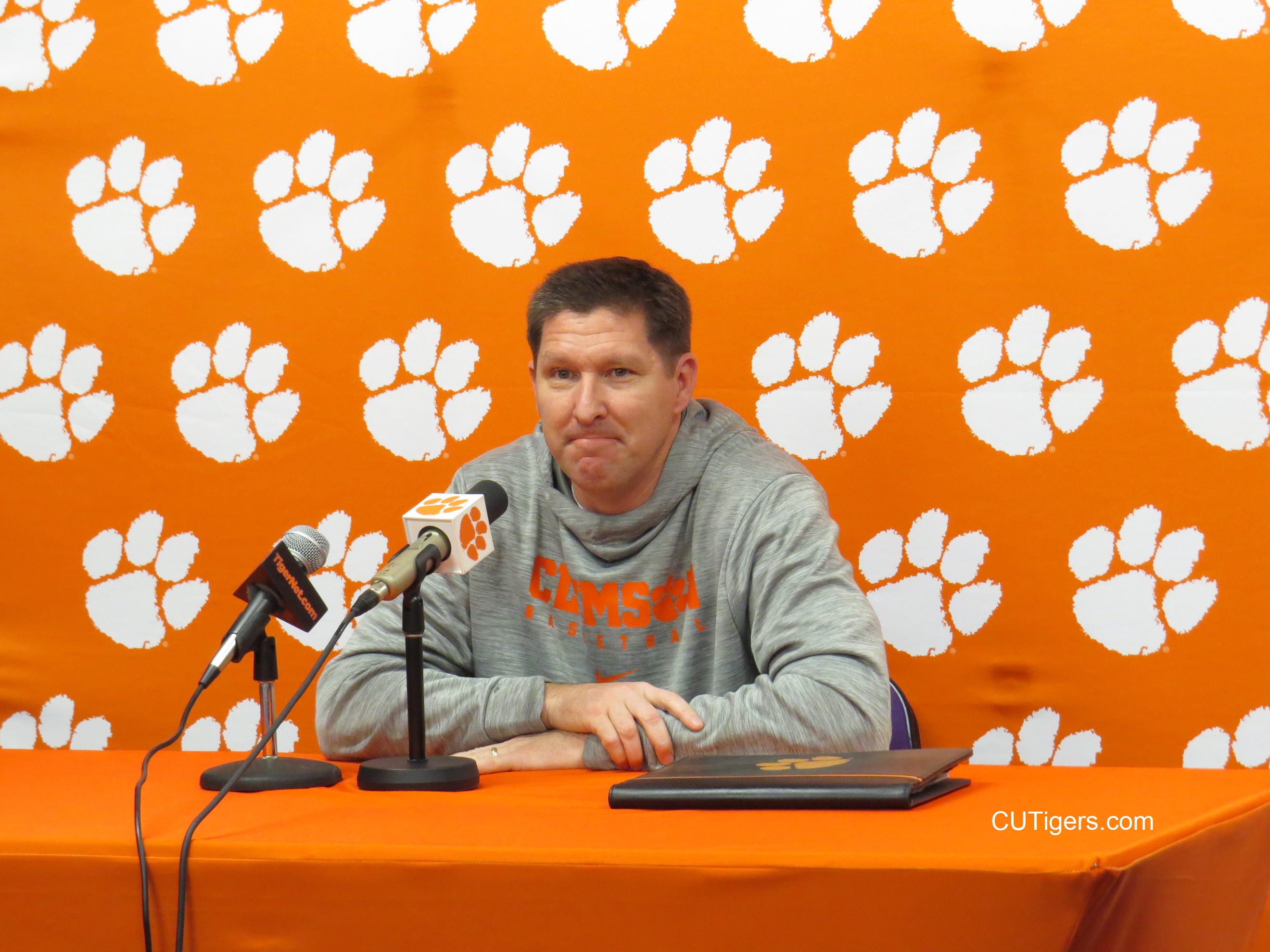 
PREVIEW: Clemson vs. No.16 Florida State

CLEMSON vs #16 Florida State
Tip: 9:05
TV: ESPNU
All-Time Series: FSU leads 42-32
This series between Clemson and FSU has been about as even as you can get since the Noles joined the ACC, with countless games going down to the wire, including several in the ACC Tournament. FSU leads the all-time series 41-32, but the Tigers are 20-12 against the Noles at home.
FSU SYNOPSIS
Florida State is one of the hottest teams in the nation at 20-5 and 8-4 in the ACC. They Noles have won 7 straight games, beginning with the 77-68 win over the Tigers in Tallahassee. The first meeting was much closer than the final score indicates. It was a 3-point game with 4 minutes left, and the Tigers led with 9 minutes left. If not for an anomalous 3-point shooting game for David Nichols, the Tigers would have won. Nichols was only a 25% shooter from beyond the arc coming into the game, but he went 4-5 against the Tigers, the most 3's he has made in a game all season. In his previous 5 games, he was just 2-15 from beyond the arc. Similarly, FSU as a team was dreadful shooting 3's, 10-47 in their 2 previous games, but made 10 of 22 against the Tigers. That's emblematic of the Tigers' bad luck all season. They could easily be a top-15 team right now if the breaks didn't always go against them.

FSU lost a trio of its best players from last year’s Elite 8 team: Bacon, Beasley and Isaac—all of whom are playing in the NBA. Isaac was the 6th overall pick in the draft after his freshman season. However, the Noles still have one of the deepest teams in the country with 11 players averaging 10 or more minutes per game. The last time these two teams met, FSU was without senior forward Phil Cofer, and he returned to play the following game against Miami. Cofer has not lit up the stat sheet since returning from his injury, but his presence makes the Noles deeper and more dangerous. He averaged 12.8 points per game last season and scored 16 against Michigan in the Elite 8. He scored 5 points in their last outing against Georgia Tech, 11 points against Syracuse and was scoreless in 30 minutes in the overtime win over Louisville. Starters Terrance Mann and Trent Forrest were also playing hurt against the Tigers in the last meeting, but they are playing at about 100% now. Mann has averaged 18 points per game over the last 3, and Forrest scored 15 in the Louisville win. FSU likes to wear teams down with their depth and full-court and half-court pressure defense. The Tigers have a good, experienced back court in Mitchell and Reed, so hopefully they won’t have any trouble breaking the press and will keep turnovers to a minimum. They did a good job breaking the press in Tallahassee.

Picking up the slack for the Noles this season has been sophomore Mfiondu Kabengele, the most pleasant surprise of the season for FSU by far. He only averages 20 minutes per game coming off the bench, but he leads the Noles with 13.2 points per game and averages 5.4 rebounds per game. He is averaging 14.7 and 6.3 rebounds in ACC play and scored 22 points in the Noles' overtime home win over Louisville 10 days ago.

The Noles have an imposing center in 7’4 senior Koumadje, but he is still extremely raw and only averages 6.6 points and 5.7 rebounds in his 16.2 minutes per game. However, he will alter shots and make things difficult when Reed and Mitchell drive to the rim. He averages 1.6 blocks despite playing less than half the game. Koumadje is the third-tallest player in the nation.

FSU is not a particularly good 3-point shooting team, shooting just 33.7% on the season, but, of course, they were 10-22 from beyond the arc against he Tigers. Teams seem to have their best shooting games of the season against the Tigers, but hopefully that won't be the case this time in Littlejohn.

FSU is a good free-throw shooting team at 73.8% this season and was even better in the first matchup, 17-21, so the Tigers will need to play solid defense without fouling.

The Tigers are coming off the heartbreaking 56-55 loss at No.16 Louisville, a team that had a 23-point lead on No.2 Duke with less than 10 minutes left in their previous game. Clemson has to be the unluckiest team in the nation. Since that last meeting with FSU, the Tigers have played 7 games, and all 3 of their losses over that stretch went down to the wire on the road. The 3 road losses were by 4 points combined, two of them were against ranked teams and the Tigers led with one second left in two of them. It's painful to think how close they are to winning 7 straight and being ranked in the top-20 right now. Instead, the Tigers are 15-10 overall and 5-7 in the ACC. For Brownell and the players, it has to feel like deja vu from two seasons ago, when the Tigers lost close game after close game. Morale of the team can't be good, but the team showed a lot of resilience in bouncing back from a 1-5 start in ACC play to win 4 straight games with 3 blowouts, culminating in an 8-point win over No.11 Virginia Tech. We'll see on Tuesday night if they have another rebound in them.

Eli Thomas is #8 in the nation and #4 in the Power Five in field goal percentage at 64.6%. He is also #10 in the Power Five in blocks per game and is one of just four players in the nation to average at least 13.0 points, 7.5 rebounds and 2.0 blocks while shooting at least 60% from the field. He scored 16 against Miami and 15 against Louisville but played only 21 minutes in that game due to foul trouble. That is probably the most important key to the Tigers' success in any given game--keeping Eli out of foul trouble early. If he plays at least 30 minutes, the Tigers are very tough to beat. The Tigers are simply not the same team with Javan White or Trey Jemison on the floor.

Leading scorer Marcquise Reed is 4th in the ACC at 18.6 points per game, but he is coming off one of his worst games of the season, going 5-18 for 13 points at Louisville. He was 3-14 for 6 points late in the game before making back-to-back 3's in the last 10 seconds to give the Tigers a chance at a miraculous comeback. He also came up with a steal with 3 seconds left but missed the would-be game-wining layup.

The Tigers have been much better defensively over the last 6 games. They are 3rd in the ACC and 21st in the nation in scoring defense, and they are #9 in the nation in defensive efficiency. In their last 5 games, they are allowing just 50 points per game. FSU likes to push the ball up the court in transition, so the Tigers will have to make sure they get back and force FSU into its half court offense.

The Tigers play much better at home, and Reed and Mitchell shoot much better in Littlejohn, where they are 11-2 this season. One of those losses was against No.4 Virginia. Again, Eli Thomas will have to avoid the needless early fouls off the ball and on screens so he can stay on the floor. If he does that, I think Reed and Mitchell will make a bunch of 3's, and the Tigers will come up with their second consecutive home win over a top-16 team. The Tigers are not out of contention for a return trip to the NCAA Tournament, but they need to keep winning at home and start getting some breaks on the road.

Our Monday interview with Brad Brownell is below!