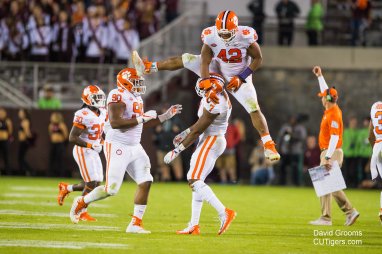 BLACKSBURG, VA. - Capped off by fourth quarter interceptions by Dorian O’Daniel and Austin Bryant, the No. 2 Clemson Tigers defeated the No. 12 Virginia Tech Hokies 31-17 at Lane Stadium on Saturday night. With the win, Clemson remained undefeated at 5-0 on the year and 3-0 in the ACC, while Virginia Tech dropped to 4-1 overall and 2-1 in conference play.

Offensively, the Tigers were led by Kelly Bryant, who threw for 186 yards and a touchdowns on 12 completions. Bryant also rushed for 109 yards on 19 carries. O’Daniel piloted the Tiger defense, recovering a Hokie fumble, returning an interception 22 yards for his second pick six of the season and completing 10 tackles, including one of the Tigers’ two sacks.

Clemson struck first, holding Virginia Tech to a three-and-out on its first drive before taking a 3-0 lead on an Alex Spence 23-yard field goal just over five minutes into the first quarter. After the Tiger defense forced another three-and-out on the ensuing Hokie drive, Clemson took a 10-0 lead on a Tavien Feaster 60-yard touchdown reception, the running back’s first career receiving score.

The Hokies put their first points on the board with three minutes left in the second quarter on a Joey Slye 43-yard field goal that cut Clemson’s lead to 10-3. The Tigers scored the last points before halftime, though, finishing a drive in which Deon Cain mustered 55 receiving yards with a C.J. Fuller one-yard touchdown run. Virginia Tech attempted and missed a 45-yard field goal as time expired in the first half, and Clemson took a 17-3 lead into the break.

The Tigers also opened the second half scoring, as Feaster gave the Tigers a 24-3 lead on a one-yard rushing score after O’Daniel recovered a Hokie fumble. The Tigers maintained that lead entering the final quarter, as the defense stopped a Virginia Tech fake field goal attempt in the final seconds of the third quarter.

Virginia Tech narrowed the Clemson lead to 24-10 a minute into the first quarter when it scored its first touchdown, a Sean Savoy two-yard run. O’Daniel’s pick six came on the Hokies’ next drive, putting the Tigers up 31-10. The Hokies scored the final points of the matchup with less than two minutes left in the game on a Josh Jackson 30-yard touchdown pass to Savoy.

Clemson returns to Death Valley for its homecoming matchup with Wake Forest at noon next Saturday.