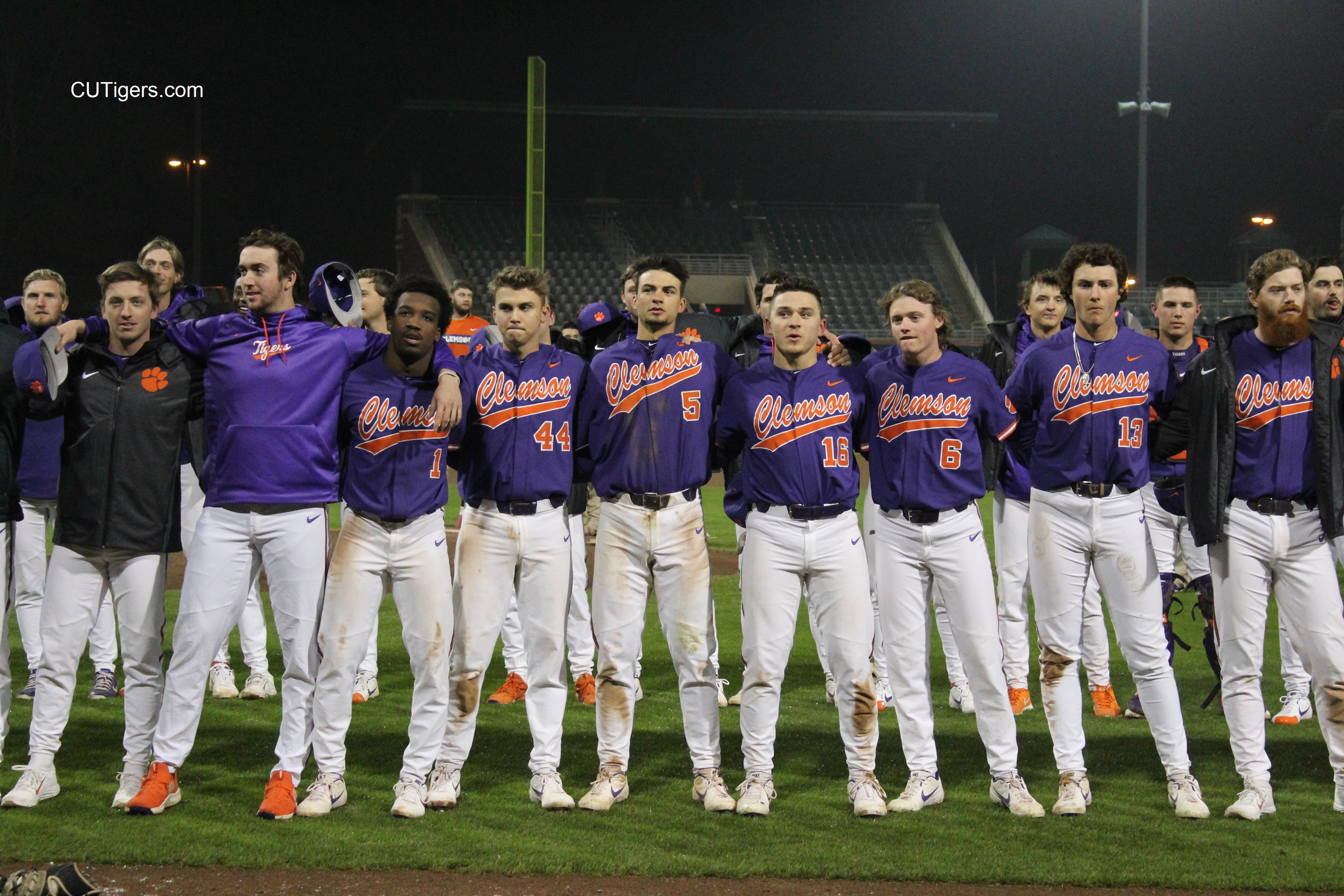 
NO.20 CLEMSON GETS BIG GAMES FROM MEREDITH, HALL & HAWKINS IN DOUBLEHEADER SWEEP; BEATS NO.3 UNC 17-3 TO CLINCH SERIES!

CLEMSON, SC - When it rains, it pours! The Tigers were scoreless through the first 6 innings on Saturday against No.3 North Carolina, but the two games of the doubleheader were as diametric as they could be. The Tigers scored 3 runs in the last 3 innings of game one, rallying from a run behind in the 9th inning to win 3-2 thanks to a "balk-off," a balk by the UNC pitcher to score the winning run. In game two, the Tigers saw an offensive explosion rarely seen--especially against a team as good as the Tar Heels--winning 17-3 on 20 hits. The Tigers scored at least 2 runs in 6 consecutive innings, including the 9th inning of game one, but only had one HR on the day, by freshman Bryar Hawkins, his second of the season. The Tigers scored 12 of their 17 runs with 2 outs! Hawkins was 4-5 with the HR, and is now batting .435 on the season. Sam Hall was 4-6 with 2 doubles, bringing his season average to .346, and a couple of sensational plays in the outfield. Hall started in center for Bryce Teodosio, the first game he has not started this season, and moved over to left later in the game. Monte Lee explained to me after the game that the decision was based on a desire to reward Meredith with a start in game two, and it payed off. Meredith was 1-2 and reached base 3 times with 3 runs scored. He was 2-3 in game one with the game-tying RBI in the 9th inning. Meredith is now batting .438 on the season.
It was a fine outing for 2-way freshman Davids Sharpe, who did not get the decision but allowed just one run one run and 3 hits with 7 K's in 6 innings of work. Former starter Jacob Hennessy picked up his second win of the week out of the bull pen, allowing one run in 3 innings. Mat Clark (3-0) was superb in his first start of the season and second of his career. He allowed 2 runs on 4 hits through 6 innings with 5 K's.
The Tigers had not beaten the Tar Heels since the 2014-15 season, so Saturday gave Monte Lee his first wins over UNC. The Tigers were swept in 3 close games at Chapel Hill against a top-10 Carolina team two years ago. The Tigers are now 11-3 (2-0 ACC) and will go for the sweep tomorrow at 1:00 with freshman Keyshawn Askew (2-0) making his first weekend start.
Post-game interviews with Monte Lee, Grayson Byrd, Bryar Hawkins and Mat Clark are below!