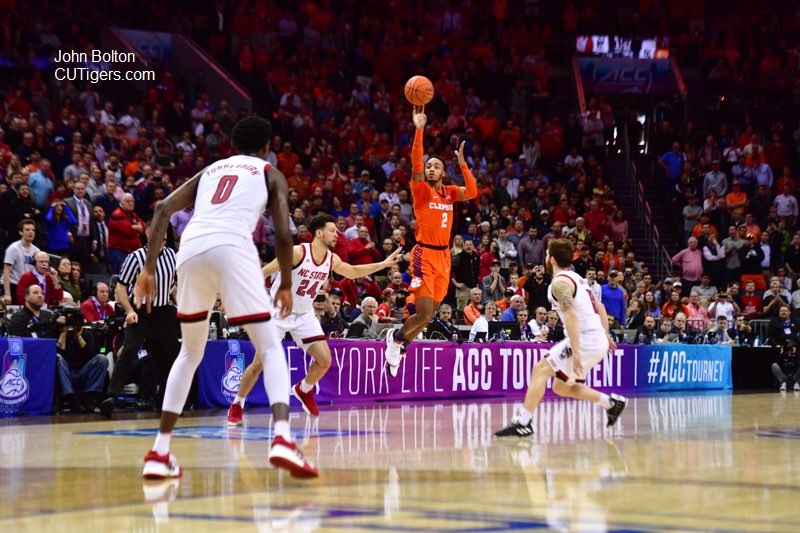 CHARLOTTE, NC - Heartache. That about sums up the season. The Tigers led by as many as 18 points, and after being down 4-3 did not surrender the lead again until 5:38 remained in the game. Once again, they had a one-point lead over State with 3 seconds left, and once again they lose by one. This time, though, rather than a buzzer-beater by Beverly to win the game, it was a horrendous call by the refs that gave State the game-winning free throws. There was at least a foot of air between the Clemson defender and the NC State shooter. What a frustrating season! The Tigers should have been 2-0 against State and easily in the NCAA field. Instead, they are 0-2 and will have to sweat it out. Let's just hope those 2 losses don't keep the Tigers from getting an NCAA bid! It will be a nervous Selection Sunday for the Tigers now. St. Mary's already stole a spot from someone on the bubble by upsetting Gonzaga in their conference championship game. I have a feeling the Tigers are going to be a No.1 seed in the NIT again and left to wonder what might have been this season. This was the 5th game that the Tigers either led with less than 3 seconds left or had the ball with a chance to win at the buzzer. 3 of those games were against ranked teams, and one was less than two weeks ago against now No.3 UNC. In that game, the refs robbed the Tigers of an opportunity to tie the game at the free throw line on a play that was clearly a foul on UNC. This time, the refs rob the Tigers in the opposite way, calling a foul on a play that was clearly not one, and putting NC State on the free throw line to win the game with 2.6 seconds left. I know how frustrating it is as a Clemson alumnus. I cannot begin to imagine what it must feel like for the players to go through this again. And now their dreams of playing in the NCAA Tournament hang in the balance. If the NCAA Selection Committee has any sense of justice, they will put the Tigers in the field. Goodness knows they are an NCAA caliber team, and their ranking bears that out.
Of course, the game should not have even come down to free throws with 2.6 seconds left. The Tigers led by as many as 18 in the first half and 16 at the break. If you look at the stats, it's hard to understand where the Tigers went wrong. They out-shot State from beyond the arc even though State is a better 3-point shooting team. They out-rebounded State by 8 even though State is a better rebounding team. They had less turnovers despite the fact that State has a better season turnover margin than the Tigers. The one thing I can point to is that Eli Thomas did not have his typical game. He was impeded by foul trouble and played just 18 minutes with 8 points and 4 rebounds. He fouled out with about 30 seconds left with a bump out on the perimeter, and who knows if his presence would have made a difference on that final possession by State. Since the Tigers were called for a bogus foul, it's hard to say his presence would have changed that, but who knows. It was one of the fewest number of minutes Thomas has played all season, though, and it definitely impacted the game. Reed also scored 16 points, a few below his average, but he had a good game with 10 rebounds and 4-7 from beyond the arc. Reed scored 24 in the Syracuse win on Saturday.
It will be frustrating for everyone if the Tigers are relegated to a No.1 seed in the NIT after being so close to so many wins and a top-25 ranking, but maybe the bright side is that we will get to see this senior group all play in Littlejohn a few more times. Reed and Eli both told me if that happens, they will be highly motivated to make a run in the NIT.
Post-game locker room interviews with Eli, Mitchell and Reed are below, and I'll have the press conference with Brownell and Reed shortly as well.