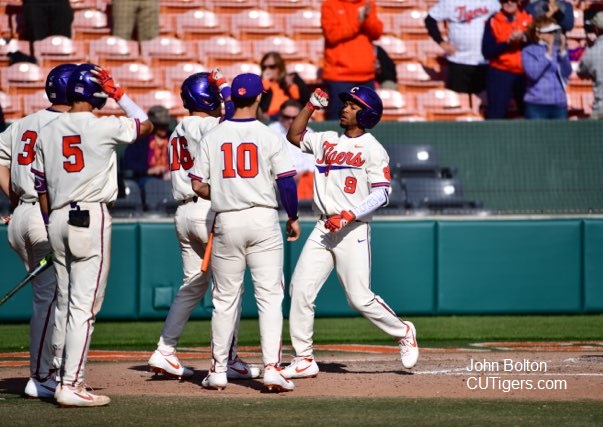 CLEMSON, SC - Runs were tough to come by over the weekend in the Notre Dame series, but the bats woke up on Tuesday as the Tigers dominated Monte Lee's alma mater and former team, College of Charleston, coached by former South Carolina Head Coach Chad Holbrook. Logan Davidson set the tone early with his team-leading 7th HR of the season, a 2-run shot in the 1st inning. The Tigers tacked on 2 more runs and never looked back. Jordan Greene hit his 3rd HR of the season.
Brooks Crawford made his first mid-week start of the season and picked up his first win in just over 4 innings of work. Transfer Sheldon Reed made his Clemson debut and pitched well. Reed redshirted last season and is a converted pitcher, throwing in the low 90's. The Tigers should have had their first shutout of the season, but a 2-out error by Byrd at 3rd gave the Cougars their only run. It was Byrd's third error in the last two games.
I asked Monte after the game about Kier Meredith's status, and he said that he definitely would not play for the rest of this week and will probably be out for a few weeks. Meredith was hampered by injuries all of last season and injured his quad while chasing a foul ball on Saturday shortly after making the defensive play of the season, robbing a homer.
Christian Wilkins threw out the first pitch to fellow future NFL first-rounder Big Dex Lawrence, as you can see in the video above. It had to be the longest first pitch in history, as Wilkins is never short of antics. It was probably the heaviest as well, with the pitcher and catcher weighing 650 pounds combined!
The Tigers improved to 15-5 on the season and will face College of Charleston again on Wednesday at 7:00 in Columbia.
Post-game interviews with Monte Lee, Jordan Greene, Sheldon Reed and Brooks Crawford are below!