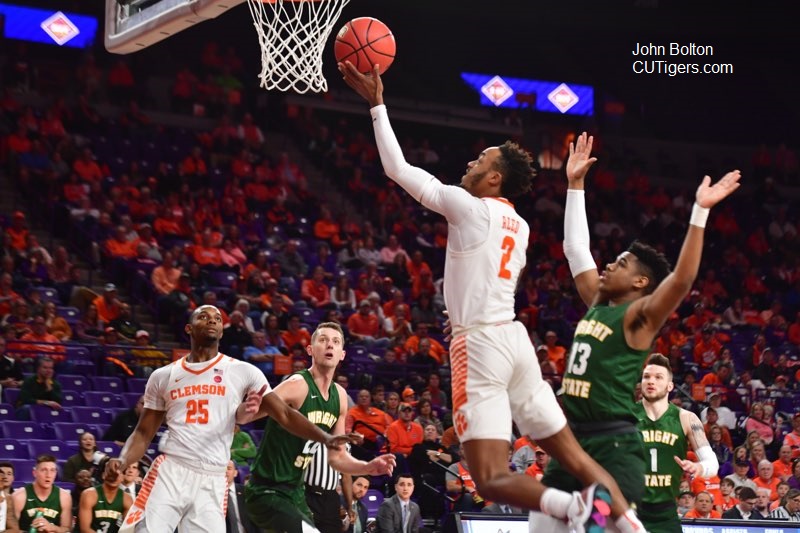 CLEMSON, SC - After the Tigers jumped out to a fast start on Tuesday night, leading 16-2, Brad Brownell's former team Wright State fought its way back to tie the game at the half with hot 3-point shooting. The second half was a back-and-forth affair, and for a while it looked like the Tigers might be one-and-done in the NIT again like they were two years ago, losing to Oakland in Littlejohn. The Tigers were without starting point guard Shelton Mitchell, who did not miss a game all season, as it was announced shortly before the game that he would not play due to his knee.
The Tigers kept battling and found a way to win a close game--something that has been a struggle all season and kept them out of the NCAA Tournament. The Raiders' best player, Love, missed 2 big free throws when they were down 3 points in the last minute. Trapp was huge at the end of the game, scoring 7 points in the final 3 minutes. John Newman came up with a big offensive rebound in the last minute that helped the Tigers seal it.
Reed scored 24, Eli 17 and Skara 16, one short of his career high. Skara was 4-8 from 3. He joked after the game that he's more comfortable with the international 3-point line. Eli picked up a foul about 10 seconds into the game, which might have made Brownell's head spin, but he managed to play a good stretch in the second half with 3 fouls before picking up his 4th late. Aamir Simms has had a disappointing second half of the season, at least offensively. He didn't score a single point on Tuesday, going 0-4 from the field. He scored 11 in Charlotte against NC State, but he has seldom scored more than a handful of points in a game down the stretch. He will need to take a big step forward in the off-season or next season will be a long one for the Tigers.
The bad news is that Shelton Mitchell is done for the season. Brownell said after the game that it's been more of a problem all season than he or Shelton have let on. I asked both of them a couple of times about his knee throughout the course of the season (no one else in the media did), and Shelton always said it felt great. Brownell told a little bit different story, saying they tried to limit how much he would do in practice. He said tonight that all season Mitchell hasn't been as explosive because of the knee. That will be a tough loss for the Tigers going forward. It will be impressive if they can make it all the way to the NIT Semifinals in New York without their starting point guard.
The Tigers will play the winner of No.3 seed Furman and No.6 seed Wichita State. Don't know the day and time yet, but it will likely be Friday or Monday. Hopefully the latter! Not only would Friday conflict with the NCAA Tournament, but the students will be back from spring break on Monday. If the game is Friday, I wouldn't be surprised if Furman fans outnumber Clemson fans in Littlejohn.
Post-game interviews with Brownell, Reed and Skara are below!