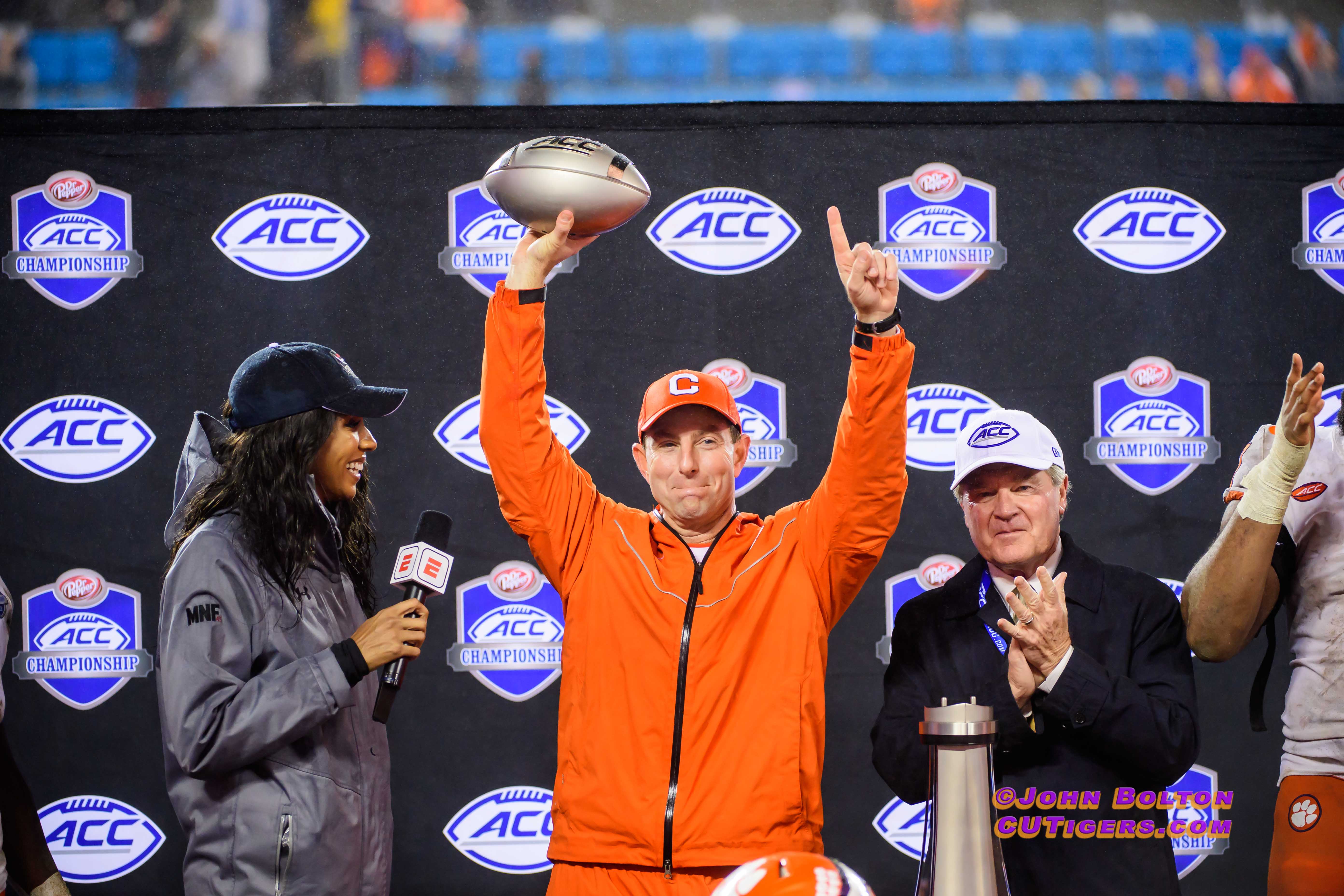 It should be a surprise to no one that the Tigers were nearly a unanimous pick by the ACC media to win a fifth straight ACC Championship in 2019. The Defending National Champions have won 13 straight ACC games, including championships, and 34 of their last 36 since 2015. The Defending National Champions are riding a nation-best 15-game win streak and have won their last 10 games by 20 points or more. That is tied for the second-longest streak all-time. Alabama holds the record with 12 straight 20-point wins last season.

Of the 173 votes from members of the media at the ACC Kickoff in Charlotte, the Tigers received 170 votes. 2 votes were for Syracuse, which was one of the Tigers’ two ACC losses in the last four years thanks to injuries to their starting quarterback and kicker in 2017. The other vote went to the darkest of dark horses, Virginia, which did finish strong last season with a 29-0 Belk Bowl win over South Carolina. The Cavaliers are the media favorite to win the wide-open Coastal Division, and it the media is right, UVA will remarkably be the fifth different opponent the Tigers beat in the ACC Championship Game in the last 5 years. That illustrates just how impressive this Clemson dynasty has been in an era of parity across college football. In fact, not even Alabama or Ohio State have won their conferences 4 years in a row.

At ACC Media Days last week, Syracuse Head Coach Dino Babers was asked if he believed there is a gap between Clemson and the rest of the ACC. He replied, "You're talking about a team that just won the national championship, beat the University of Alabama by a double-digit score and haven't lost a game since 2017. I think they are a fantastic team. And I think that the ACC Atlantic teams and the ACC teams have a better feel for them because we play them a lot more. And I think that when other teams outside the conference play a team like that, they have a lot of trouble with them." NC State Head Coach Dave Doeren added, "I think there's a gap between Clemson and everybody right now. They just beat the SEC Champion by however many in the Championship Game. They're the team to beat, and they've earned that."

Clemson has won more ACC titles (19) than any other school. The Tigers open the season on Thursday night against new coach Geoff Collins and Georgia Tech in Death Valley in the first football game televised by the new ESPN ACC Network. The ACC press release for the preseason media vote is below.

The Tigers, who posted a perfect 15-0 record last season en route to earning their second College Football Playoff championship in three years, were also chosen to repeat as Atlantic Division winners. Virginia was picked to finish atop the Coastal Division following an eight-win 2018 season that culminated with a 28-0 shutout of South Carolina in the Belk Bowl.

Clemson was named the likely 2019 ACC champion on 170 ballots. Syracuse picked up two votes, and Virginia received one.

The Atlantic and Coastal Division winners will meet in the 2019 ACC Football Championship Game on Saturday, December 7, at Charlotte’s Bank of America Stadium.