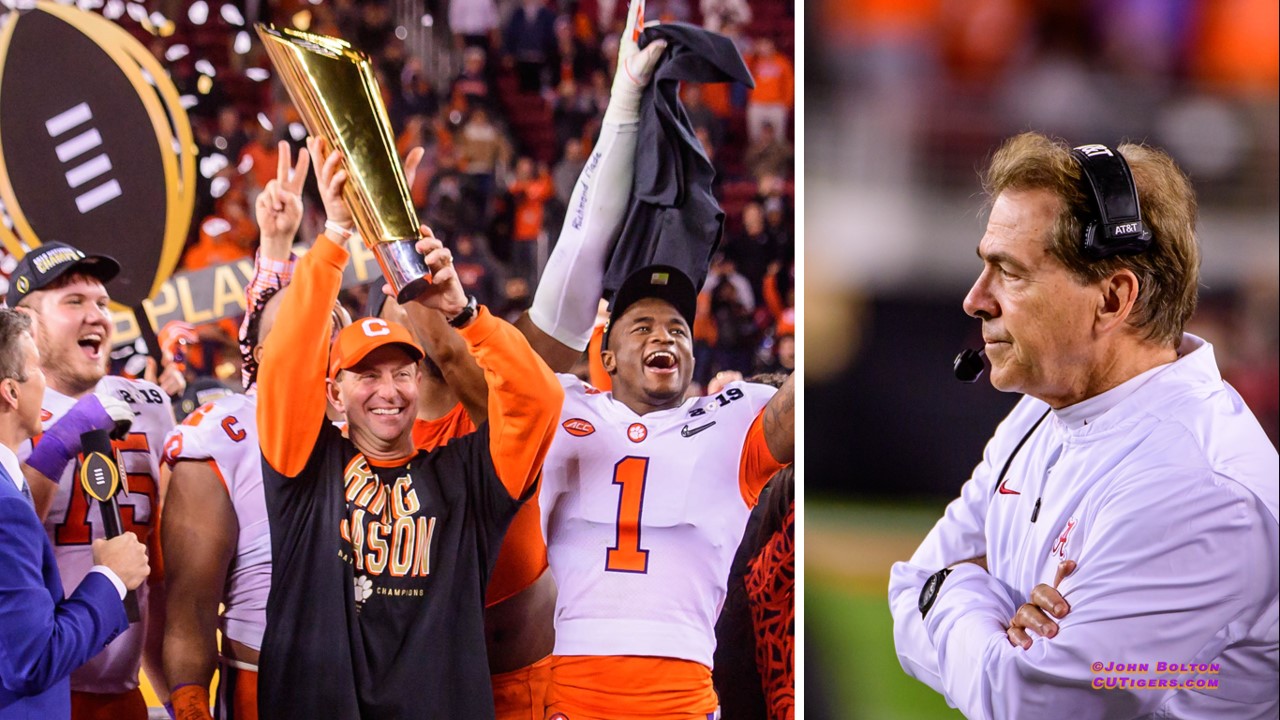 In spite of the Tigers' 44-16 domination of Alabama 6 months ago, beating Nick Saban and the longtime kings of the SEC in their last two national championship meetings, Clemson fans have had to listen to Alabama players, fans and even SEC homers in the media make excuse after excuse for the historic beat down at the hands of the ACC Champs. We have heard the excuses for years. If SEC teams win their bowl games, it's because it's the greatest conference. If the two best teams in the SEC get their doors blown off--like UGA in the Sugar Bowl against Texas and Alabama against Clemson--it's only because UGA had no interest in playing in that bowl and Alabama wasn't focused or they were worn out from the "grind" of having to play in the SEC, as if that gave Clemson some imaginary advantage. Note that they couldn't make the claim Alabama had no interest in playing in the National Championship Game, so they go to one of the backup excuses instead. Forget about the fact that the excuses don't even make sense. The ones who say Clemson had an advantage by playing in a weaker conference must be oblivious to the fact that Alabama 's schedule was ranked lower than Clemson's by ESPN. Or that Alabama won all 12 regular season games by 20 points or more. Or that their non-conference opponents were Louisville (2-10), Arkansas State, Louisiana Lafayette and The Citadel. Yeah, that’s a real grind of a schedule. Oh, and incidentally, even if you buy the claim that Alabama’s schedule was so much more rigorous than Clemson’s, doesn’t the 5 weeks off before the playoff render that moot?

And the distraction excuse? Funny how Alabama has had numerous players with one foot in the NFL every year for the past decade, but that wasn’t a problem when they blew out Notre Dame in the National Championship or when they beat UGA for the title two years ago. No, that excuse only comes out when they lose by 28 points to Clemson. To be fair, there are the odd Alabama fans that were able to admit they were simply beaten by a better team, but it seems like the majority--or at least the unsilent majority--are unable to take the high road.

Last week at ACC Media Days in Charlotte, Dabo was asked about the excuses SEC, Alabama fans and even Nick Saban have bandied about. Dabo laughed it off, saying, “I don’t know what I’m supposed to say. I mean, we were the better team that day.” He went on to talk about the old SEC two-step and the invalid claim that the ACC is not as strong as the SEC. “I think our league is so understated, it’s not even funny. I mean, we’ve won more national championships in the last 6 years than any conference in football. The reason we win is because of our league and how we’re challenged week in and week out. Five or six years ago, it’s hilarious because the rhetoric used to be: ‘An ACC team’s never gonna win a national championship because they don’t play anybody and so when they get to post-season and play the big bad boys, they can’t be prepared.’ Well, now we win it, and the only reason we win it now is because we don’t play anybody. So...you can’t have it both ways. I think at the end of the day, the reason we win is because we play incredible competition. This league has had 32 bowl teams in the last 3 years. We have 19 post-season wins in the last 3 years.”

Clemson is 10-2 in his last 12 games against the SEC, 8-0 against the SEC other than Alabama. The Tigers have won their last 4 meetings with Auburn, their last 5 against South Carolina, their last against LSU and Texas A&M, and they split their last 2 meetings with Georgia. And all of those games except for LSU were played during the regular season, so any claim that Clemson would not have been as dominant in the last four years if it had to play in the “mighty SEC” week in and week out is simply sour grapes and foolish. In fact, if Clemson did play in the SEC, it would actually have an easier schedule some years because it could schedule 4 non-conference pushovers like Alabama did last year. In addition to its 8-game slate of ACC games, the Tigers almost always face two strong Power Five teams such as Notre Dame, Auburn or Georgia. The bottom line is that Clemson is arguably the strongest program in the nation right now, and it doesn’t make a lick of difference what conference the Tigers call home. They have the exact same record as Alabama over the last 4 years (55-4), which is the best 4-year record in the history of college football. They just went 15-0 for the first time in the history of the sport as we know it, and they have won their last two meetings with Alabama in national title games. So make all the excuses you want, SEC fans, but get used to making them because you’re likely going to continue needing them.