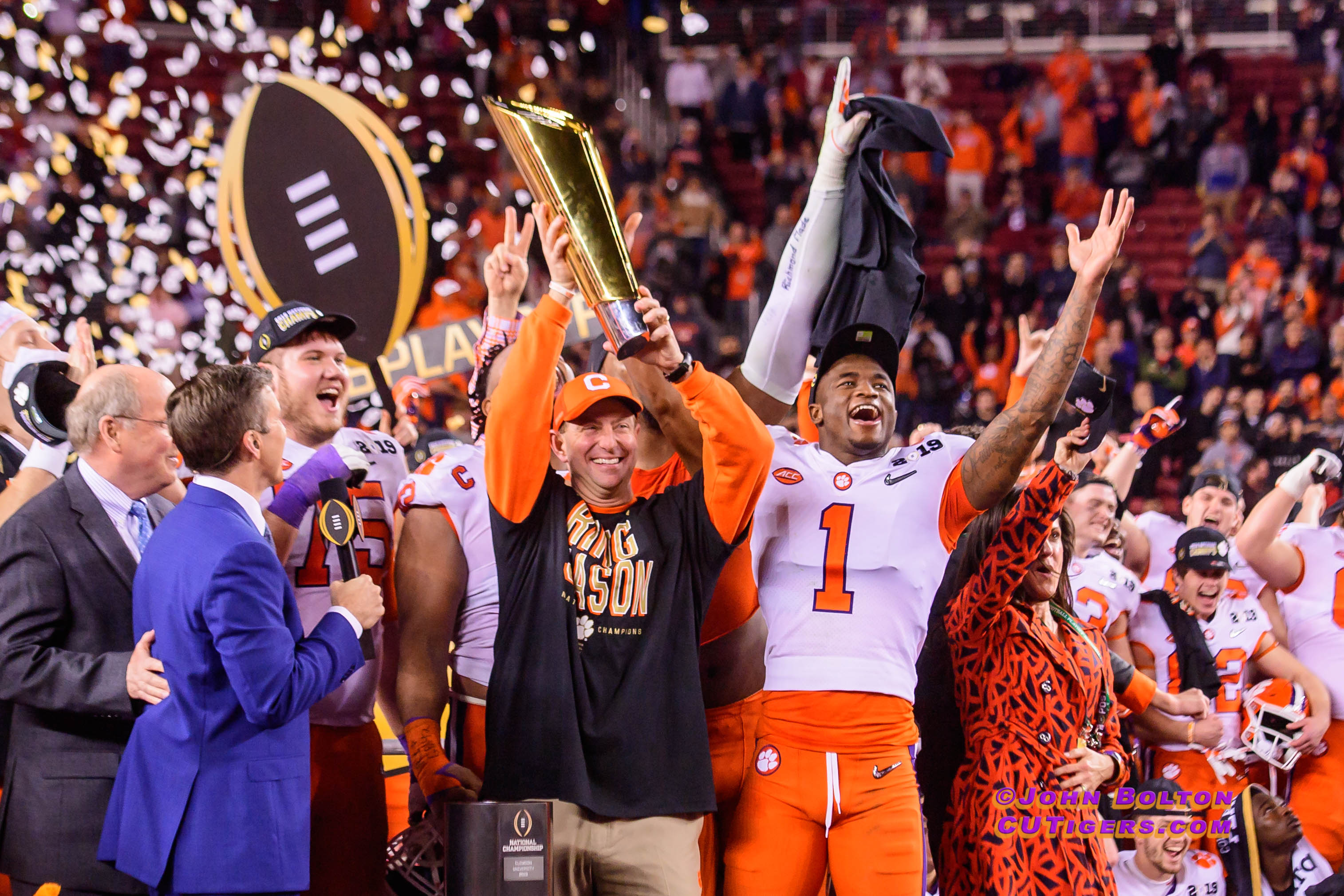 Photo by Trevor Groves CUTigers.com
As expected, the Defending Champs are No.1 in the Preseason AP Poll, released on Monday afternoon. Clemson is the 23rd school in history to have been given that distinction. The last school to make its debut as preseason AP No.1 was ironically Georgia in 2008. Just like the Coaches' Poll that was released a few weeks ago, this marks the first time Clemson has ever occupied the top spot in the AP Preseason Poll. The Tigers, of course, have finished with a higher final ranking than their preseason rank for a national-record 8 straight years, including twice when ranked preseason No.2.
Now the Tigers will have the monumental task of repeating as national champions, something rarely accomplished and rarer still for the preseason No.1. In the last 13 years, there has been just one national champion ranked No.1 by the AP preseason: 2017 Alabama, and they were the No.4 seed in the playoff after failing to make the SEC Championship Game. There has also been just one repeat national champion over that period: 2012 Alabama. Since preseason polls began in 1950, the same number of preseason No.2 teams have won the national title as No.1 teams: 11. So Dabo knows that this ranking, while cool to have it finally happen, is not worth the paper it's printed on! In case you were wondering, since 1950 only 2 teams have gone wire to wire as No.1: 1999 FSU and 2004 USC. The Tigers will have to go 15-0 for a second straight season to become the third!

CLEMSON, S.C. — For the first time in school history, the Clemson Tigers will enter the 2019 football season ranked No. 1 in the Associated Press Preseason Top 25 poll, which was released on Monday. It represents Clemson's second No. 1 selection among major polls this preseason,matching its ranking atop the 2019 preseason Coaches Poll.

Prior to Clemson's No. 1 ranking this preseason, the program's previous high had been second, the preseason rank held by both the 2016 and 2018 squads that would each go on to earn the national championship.

Under Head Coach Dabo Swinney, Clemson has met or exceeded its preseason ranking in the final AP poll in each of the last eight seasons. Swinney's eight-year streak is the longest by a coach in college football history. The only time in the last eight years that Clemson did not exceed its preseason AP ranking was 2013, when the Tigers both opened and concluded the year at No. 8.

Clemson will open the season at Memorial Stadium against Georgia Tech on Thursday, Aug. 29, marking the earliest opener in the calendar year in the program’s 124-year history. The contest will be the first live football game broadcast on ACC Network, which launches on Aug. 22.Fans are encouraged to visit GetACCN.com and the ACC Network FAQ on ClemsonTigers.com to ensure that their cable providers will carry the network.

Tickets for a select number of games, including the season opener, remain available by visiting ClemsonTigers.com/FootballTix or calling 1-800 CLEMSON.