The Tiger runs down The Hill with the National Championship Trophy:

The new championship banners are unveiled:

The Most Exciting 25 Seconds in College Football, right into your living room:

CLEMSON, SC - Travis Etienne's 2019 Heisman campaign started with a bullet, as he rushed for 205 yards and 3 touchdowns on just 12 carries in the Defending Champs' 52-14 blowout of Georgia Tech on Thursday night. He may have an early lead on backfield mate Trevor Lawrence in the Hesiman race, but don't expect that to last too long. Trevor didn't put up the big passing numbers to which we're accustomed--he was 13-23 for 168 yards and a TD in just under 3 quarters of work--but he exhibited the running game that Dabo said he'd worked so hard on in the off-season. Trevor rushed 3 times for 24 yards and the Tigers' first touchdown of the season, and he had another great 23-yard burst negated by a holding call. Trevor's running ability this season will create nightmares for defensive coordinators. They will be forced to employ a spy on Trevor, which will open things up in the passing game with all those great receivers. After just 4 interceptions in 15 games last season (one was a fluke off the back of Cervenka's helmet on a screen pass at Tech), Trevor threw 2 in the first half tonight. However, the first of those picks might have been a defining moment for his Heisman campaign. With a 21-0 lead, rather than chalk it up to a pick-six and jog after Swilling as 95% of quarterbacks would have, Trevor went on a full sprint for 40 yards and dove to knock Swilling out of bounds at the 2-yard-line and prevent the touchdown. His incredible effort play was rewarded by the defense, as Denzel Johnson intercepted a pass tipped by Jamie Skalski on 4th down. Folks, that was a "Heisman moment" if there ever was one, and don't be surprised if you see that replayed more than any of his TD passes this season. It was also a galvanizing moment for the team and strengthened Trevor’s position as team leader. When his teammates see the Heisman front-runner giving that kind of effort with a 21-0 lead, it can’t help but set a huge example and fire them up to play for him. You never like to see an interception, but that one was better than a touchdown. 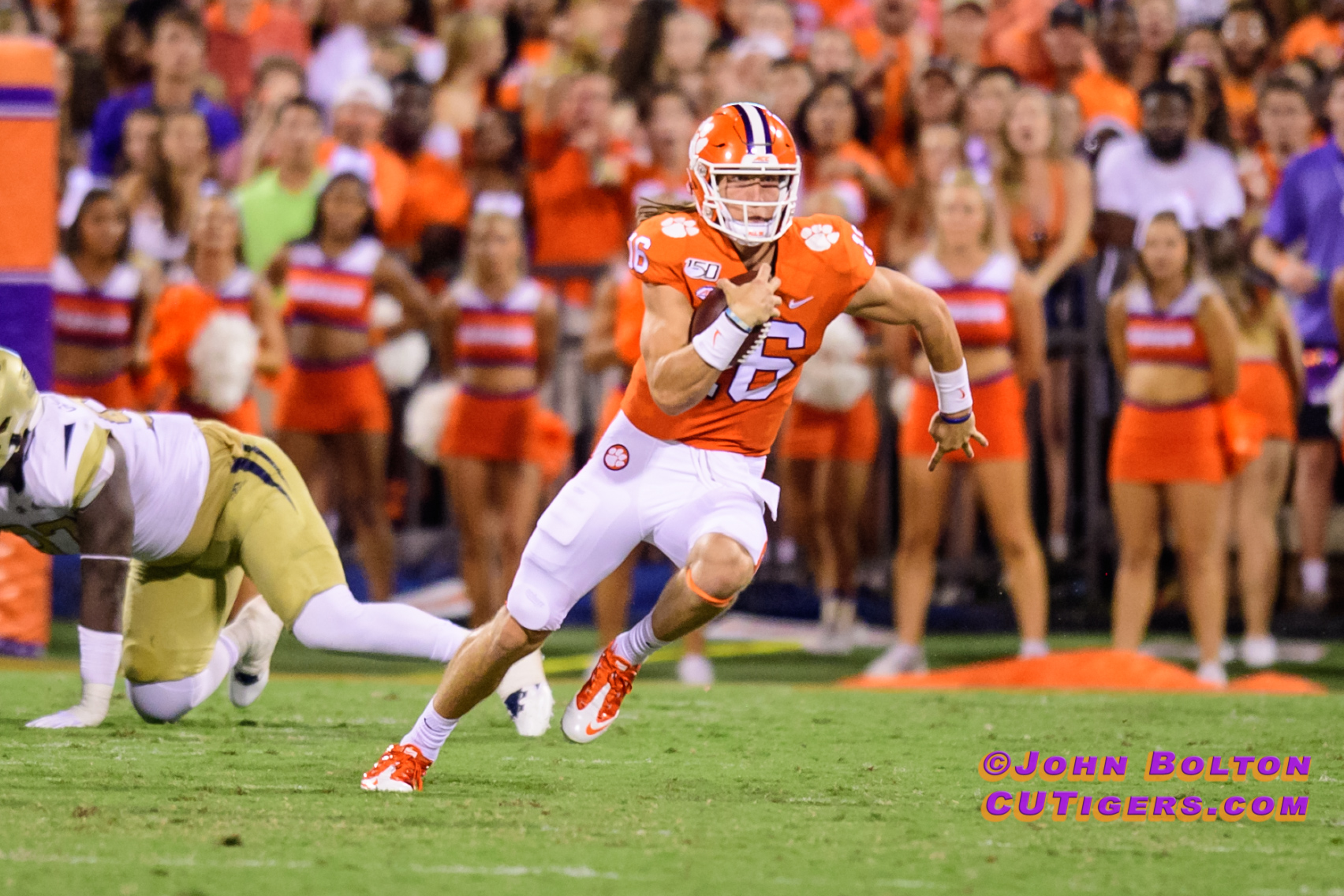 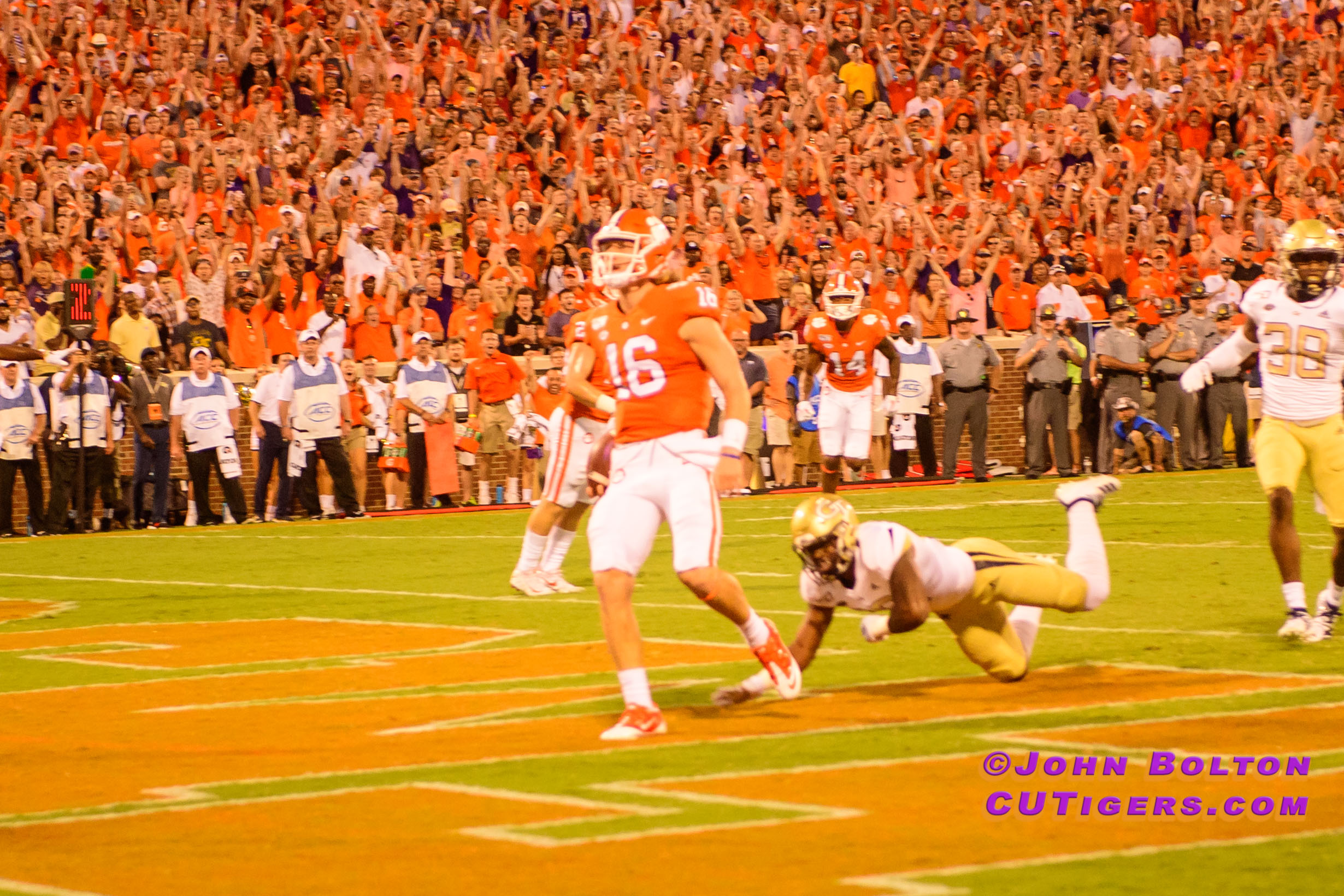 It was a somewhat subdued night for Justyn Ross compared to what we’re used to, but Tee Higgins made a spectacular catch on a one-on-one play for a 62-yard score. Higgins averaged a TD every 5 catches last season, and he bested that with a TD on 4 catches tonight. Ross did make an outstanding diving catch on a long pass, but his knee just caught the sideline before his toe touched in bounds. Freshman Frank Ladson was coming off minor knee surgery about three weeks ago, and we were unsure if he would play tonight, but he made a diving catch on a perfectly thrown fade route from Chase Brice. Fellow freshman Joseph Ngata was also impressive both in the passing game and on kick returns. Chase Brice looked fantastic. He was 5-7 with a TD, and his two incompletions were perfectly thrown passes over 20 yards that should have been caught for touchdowns. One was dropped by Cornell Powell and the other by freshman Brannon Spector, wearing Hunter Renfrow’s #13. What a rare luxury to have a proven backup quarterback like Chase Brice, especially in this day and age! 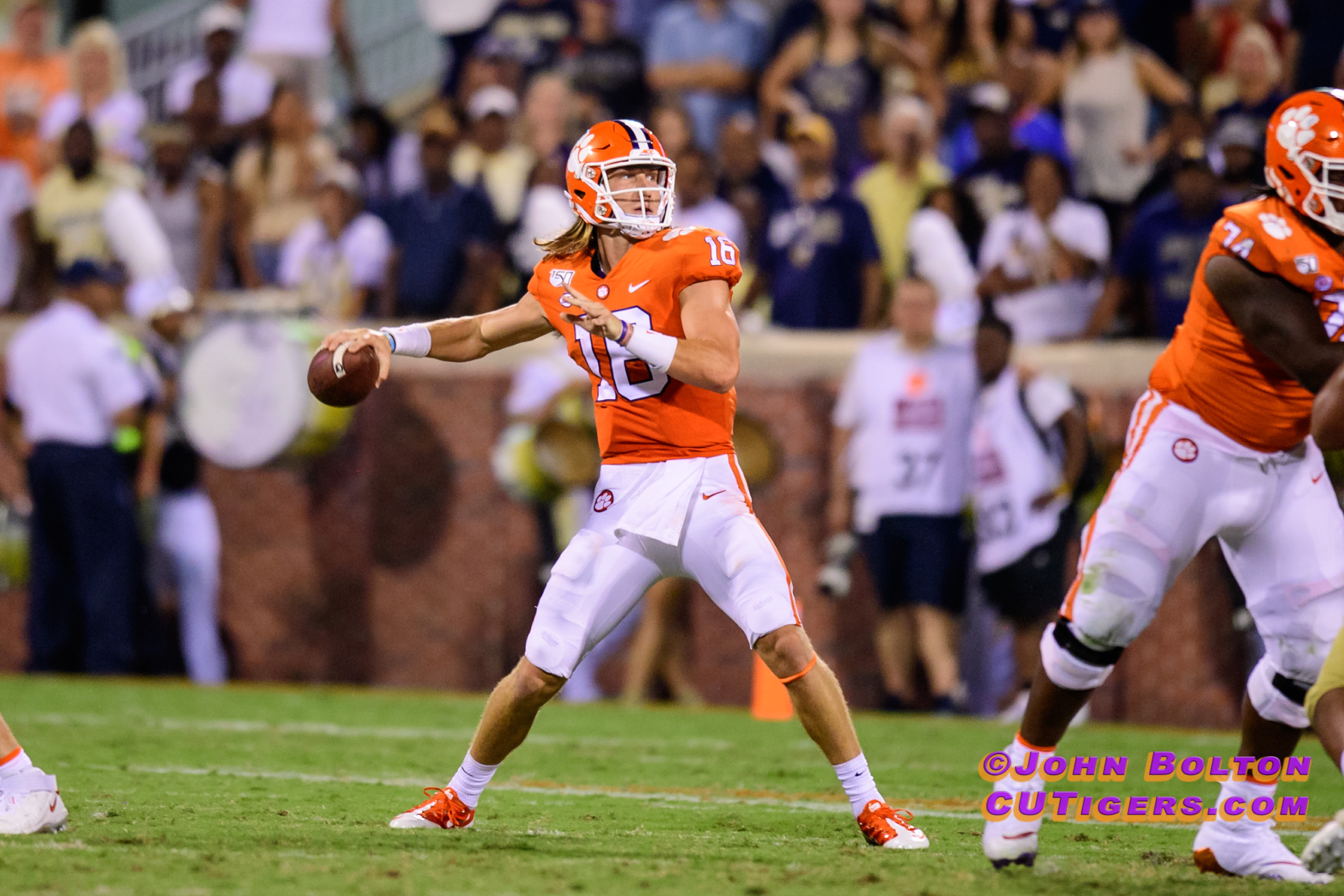 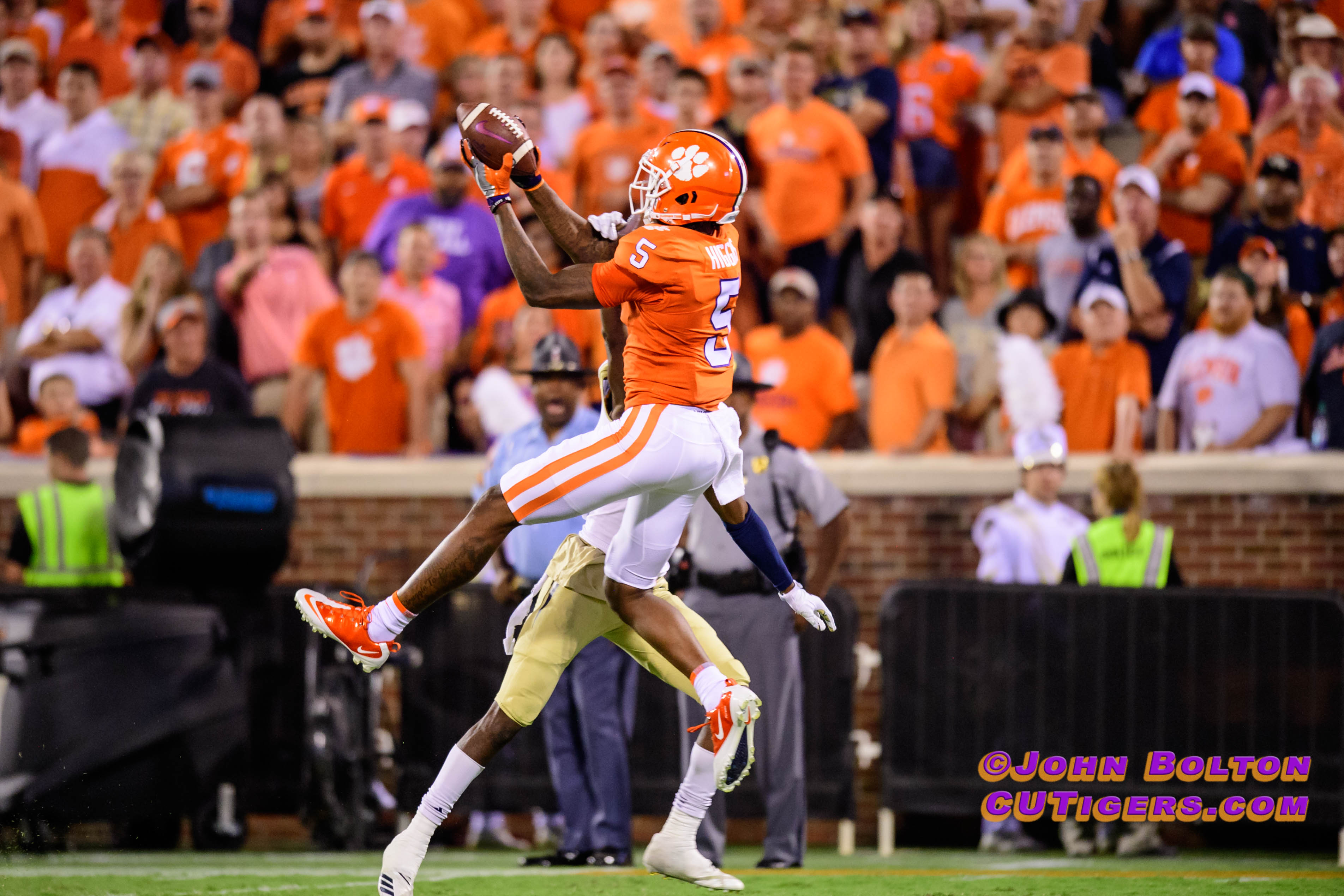 The defense played well overall, allowing just 14 points on 294 yards with backups playing much of the game. You have to also keep in mind that it was a total mystery what kind of offense Tech would run with a brand new coaching staff and a team full of players that have played in a completely different offense for years. Tech ran a lot of its old option plays, as I expected the would, and brought a few surprises that the defense wasn’t expecting, but Venables and company did a good job with their in-game adjustments. Freshman DT Tyler Davis got the start, as I thought he might, and was as advertised. The defense recorded 3 sacks—including a first for redshirt freshman K.J. Henry—and could have been credited with another by Xavier Thomas on a zone-read play in which he tackled the QB for a 10-yard loss. The defense also created three turnovers: interceptions by Denzel Johnson and Tanner Muse and a fumble forced by Chad Smith and recovered by Xavier Kelly. There was also a muffed punt by Tech recovered by Baylon Spector, setting up the first score. 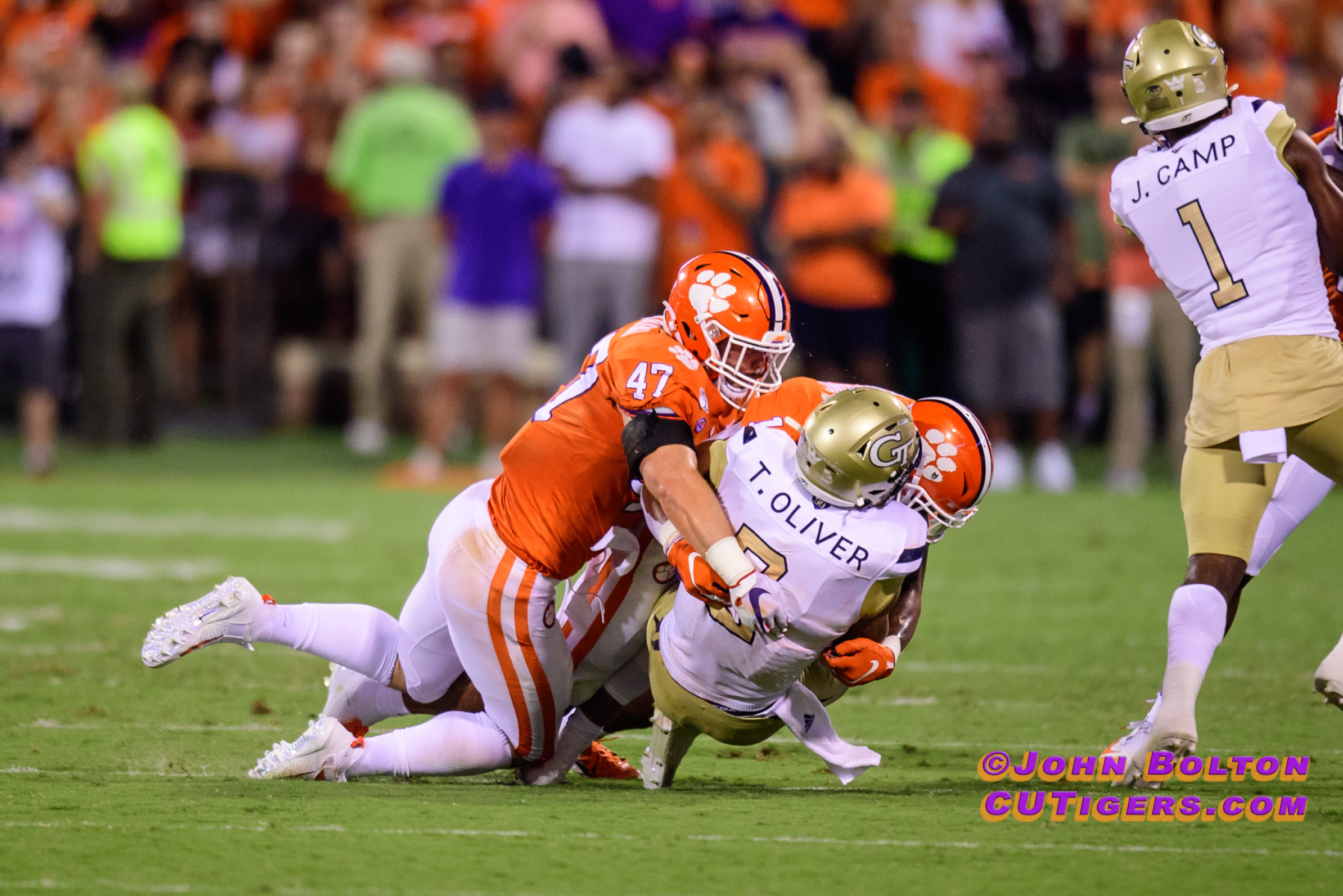 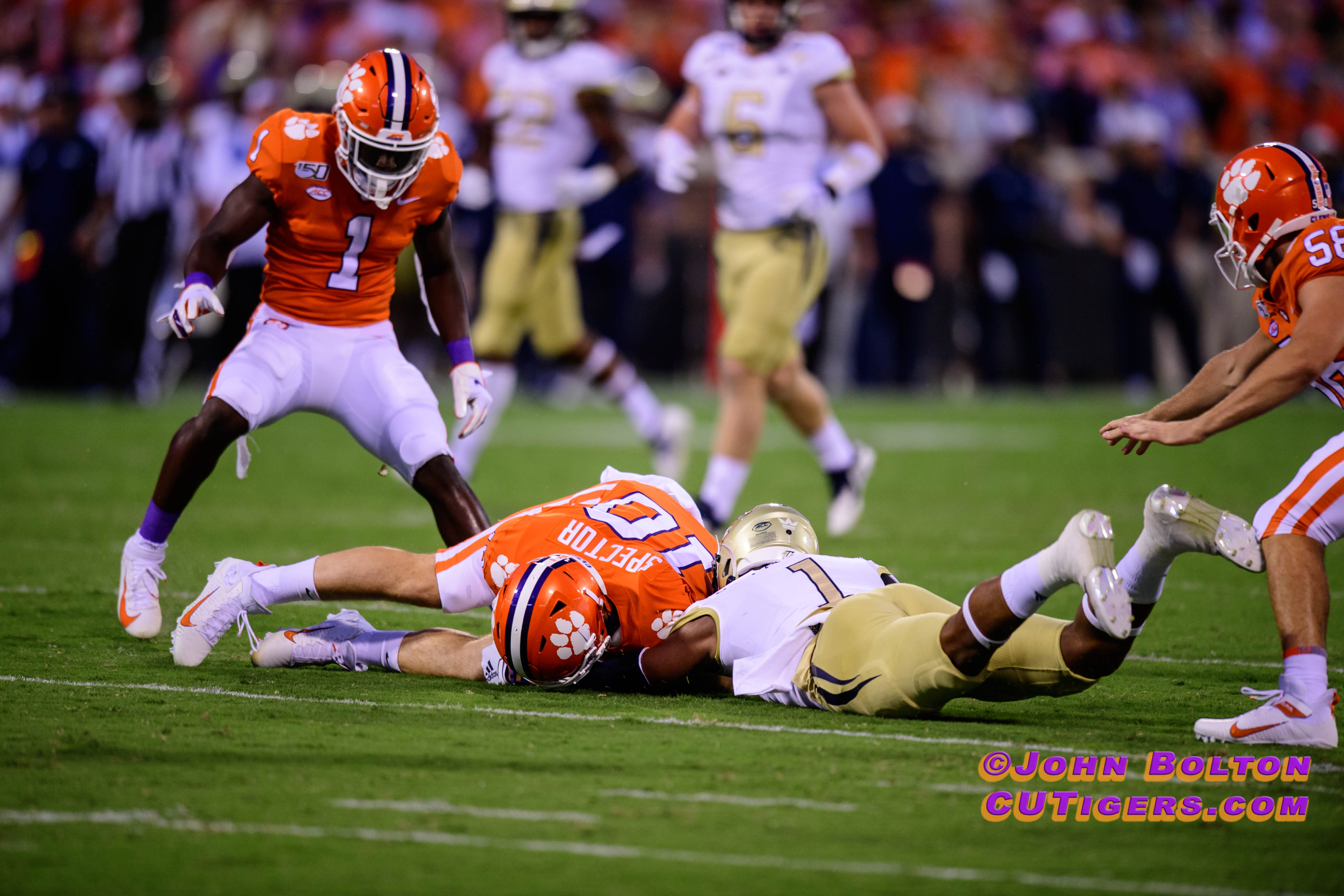 The coverage units on special teams played well, and B.T. Potter made his only attempt from 51 yards—the longest field goal since Catanzaro in 2013. Will Spiers averaged 40 yards on his 3 punts, landing 2 inside the 20.

There will be plenty for the coaches and players to work on after they review the film, but it was an impressive statement by the Defending Champs in a rare opener against an ACC opponent. My score prediction was 55-17, so I nailed the margin of victory and was just 3 points off for each team. The Tigers racked up 632 total yards, including 411 on the ground and 5 rushing touchdowns. They had explosive plays both through the air and on the ground and won the turnover margin for a fourth straight game—the longest streak since 2013. The atmosphere in Death Valley was electric, and it will be even more so when No.12 Texas A&M comes calling next week!