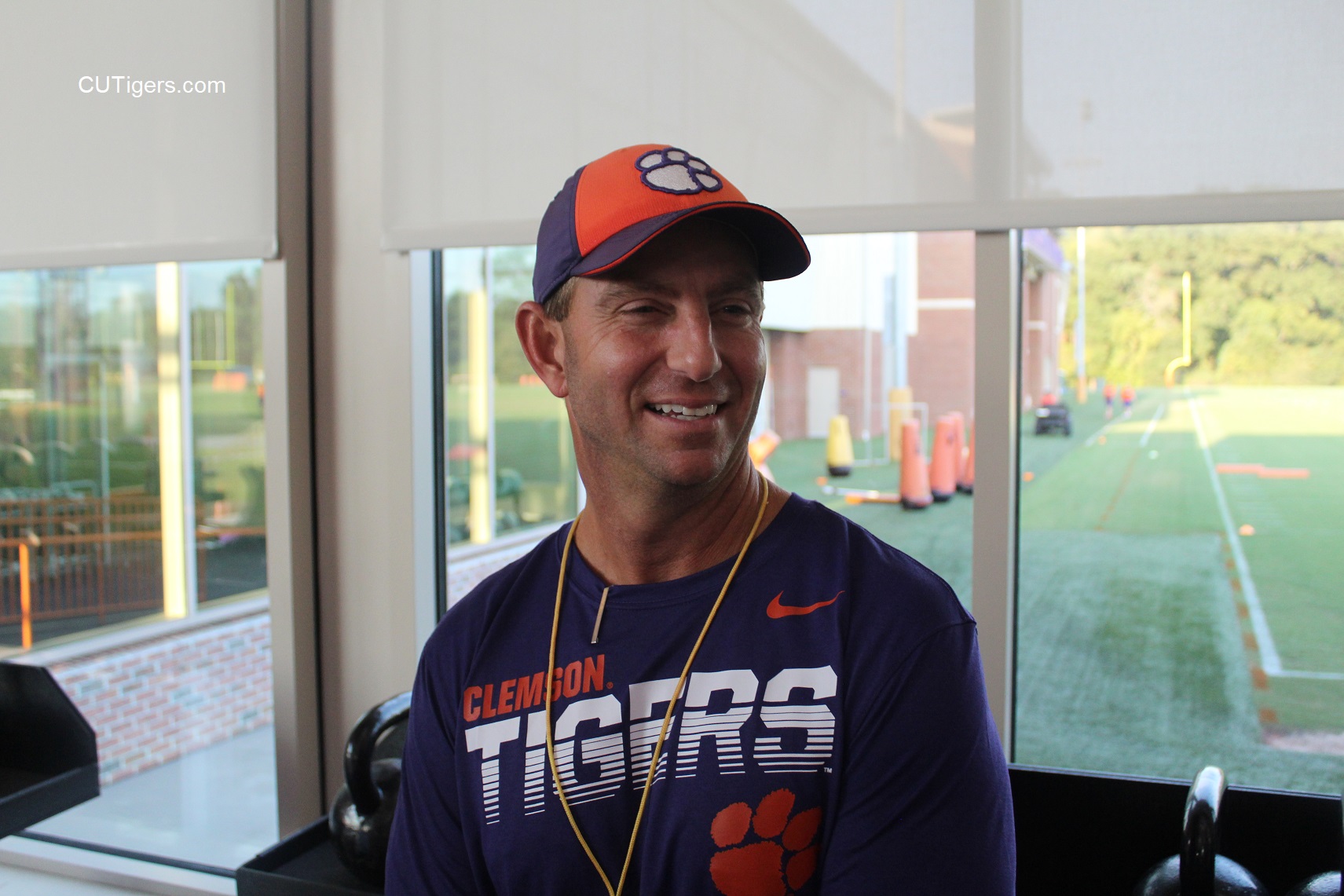 
DABO AND NO.1 CLEMSON READY FOR FIRST ROAD GAME AT SYRACUSE

Photo by Trevor Groves CUTigers.com
As always, we spoke with Dabo on Wednesday evening after practice, as the Tigers prepare to go on the road for the first time this season. Everyone remembers, of course, that the last time the Defending Champs lost a regular season game, it was at Syracuse two years ago on Friday the 13th. This time, the Tigers will thankfully miss Friday the 13th by a day and look to extend the nation's longest Saturday win streak to 31 games. The Tigers are also seeking a school-record 18th straight win, extending the nation's longest active win streak. We keep hearing over and over how much trouble Syracuse has given Clemson in the last two meetings, but no one ever qualifies it by adding that the Tigers have not gotten to halftime with their starting quarterback in the last two meetings. And two years ago, when the Tigers lost by 3 in the Carrier Dome, they were also without four-year starting kicker Greg Huegel, who was injured days before! Backup Alex Spence missed two relatively easy field goals in that game, so the Tigers probably would have won with Huegel despite the loss of their starting quarterback.
Fortunately, there are no injuries to report this week, but we'll see if Trevor Lawrence can actually get through the entire game unscathed. If Syracuse does manage to knock the Tigers' QB out for the third straight season, Chase Brice is more than capable of leading this team to victory on Saturday. He was extremely sharp in the opener against Georgia Tech. He would have been 7-7 with 3 touchdowns in less than a half of play if not for a couple drops by his receivers in the end zone.
Dabo told me that Xavier Kelly graded very well in the opener, and he came up with a fumble recovery in that game, so it's puzzling why he did not see a single snap against Texas A&M on Saturday. Dabo said that it was just a result of the defensive scheme they employed in that game. I asked him if we can expect Kelly will play substantially at Syracuse, and Dabo said, "We'll see..."
Finally, I asked Dabo about the weight-lifting exploits of Gage Cervenka, who is easily the strongest player on the team. His prowess in the weight room has reached legendary status, and you'd think Cervenka is the second coming of Paul Bunyon to hear Sean Pollard talk about him. Dabo confirmed the mythos, saying that Cervenka could be a professional weight lifter if he wanted. That power has certainly served Cervenka well in his new position at guard. Remember, Cervenka was a defensive lineman before moving to backup center last season, and he moved over to guard in August with Pollard starting at center.
The full interview is below. Don't forget to check back on Friday morning for my extensive preview and prediction!
TUESDAY DABO PC, COACH/PLAYER INTERVIEWS & MORE HERE