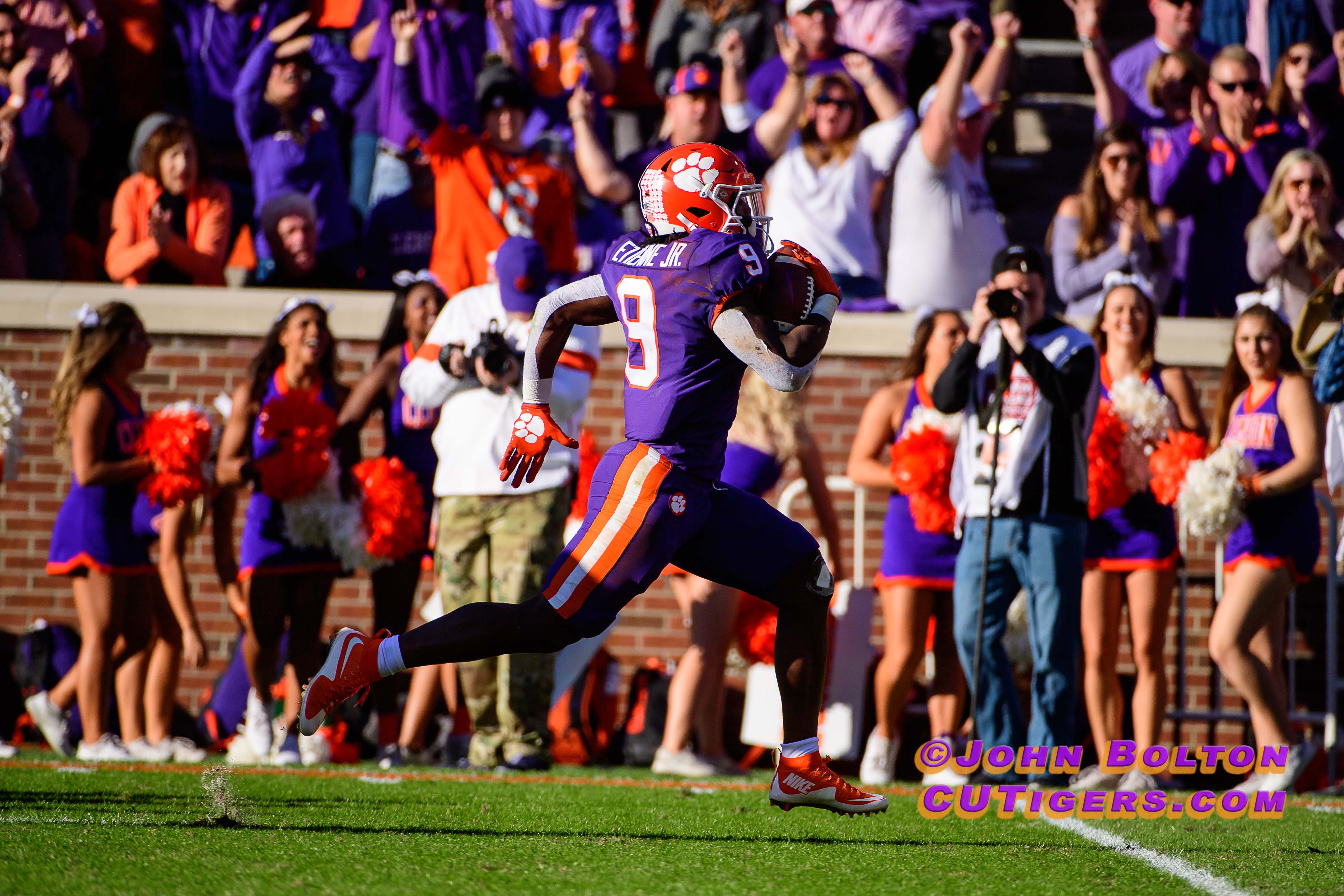 CLEMSON, SC - It was a historic day in Death Valley on Military Appreciation Day. Travis Etienne scored twice to break James Davis’s Clemson record with his 48th career rush TD. He also tied C.J. Spiller for the most total touchdowns in Clemson history. The duo of Davis and Spiller were colloquially known as “Thunder and Lightning” at Clemson, and Dabo said after the game that Etienne is a combination of the two, possessing both the power and the speed. Etienne rushed for 212 yards on just 9 carries to become the first Clemson player ever with 3 career 200-yard rushing games. 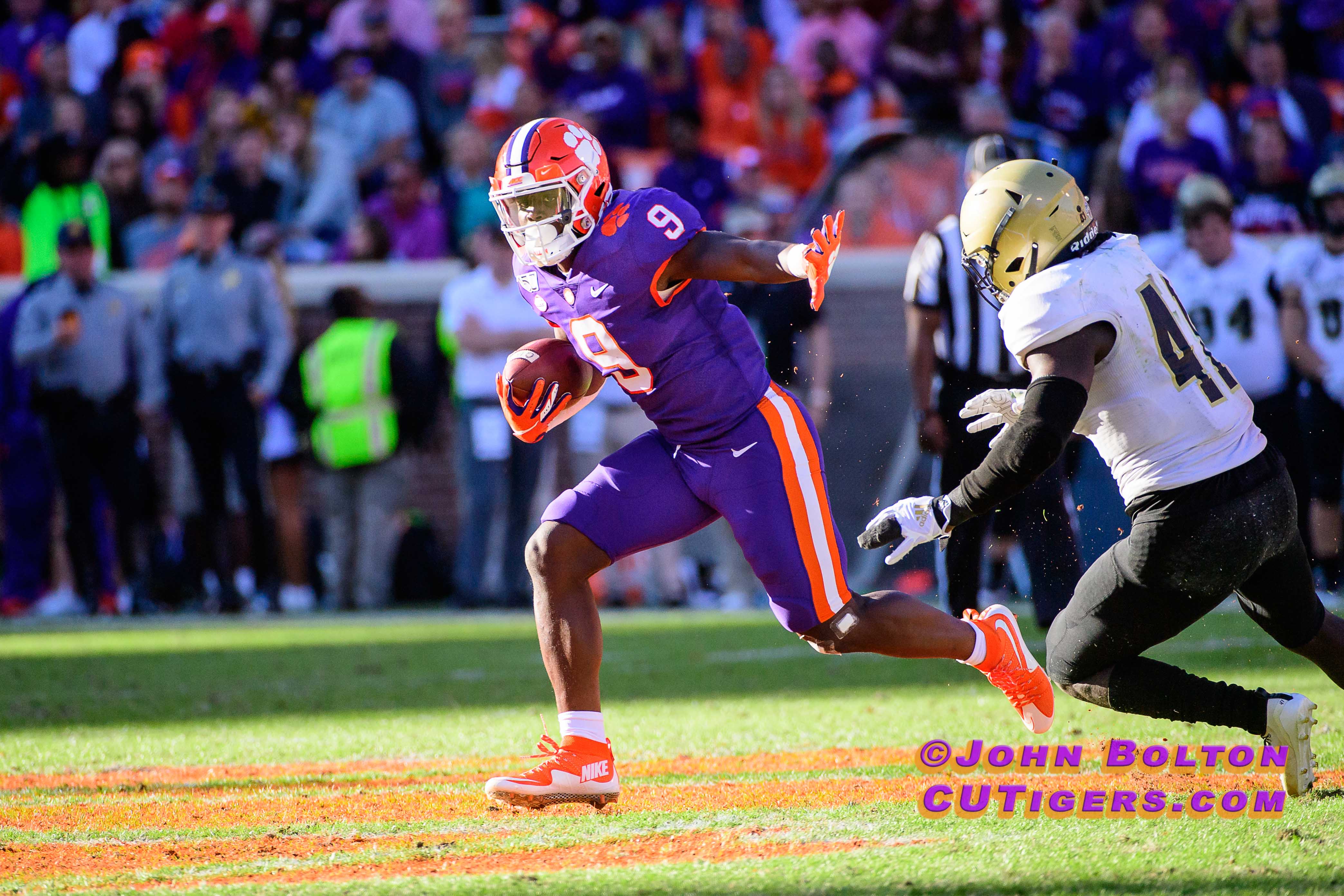 The final score was 59-14, but the Tigers could have scored 100 if they wanted to. They scored touchdowns on 8 of their first 9 possessions before taking the starters out and finished with a whopping 702 total yards. Trevor Lawrence was brilliant once again, going 12-16 for 218 yards, 3 touchdowns and no interceptions. It was his fourth straight game with 3 touchdown passes, which hadn’t been done at Clemson since Tajh Boyd in 2012. For all the talk from ESPN about Trevor Lawrence not playing well, his quarterback rating is actually higher than it was at this time last year! Trevor spread the ball around evenly to his starting receivers—Rodgers, Ross and Higgins each scored touchdowns. In fact, Ross has 5 touchdowns on the season, Higgins and Rodgers each have 4 and Overton has 3, so Trevor has spread the wealth among his talented play-makers all season long. Trevor continues to use his legs effectively as well, rushing 4 times for 33 yards and his 6th rush TD of the season. 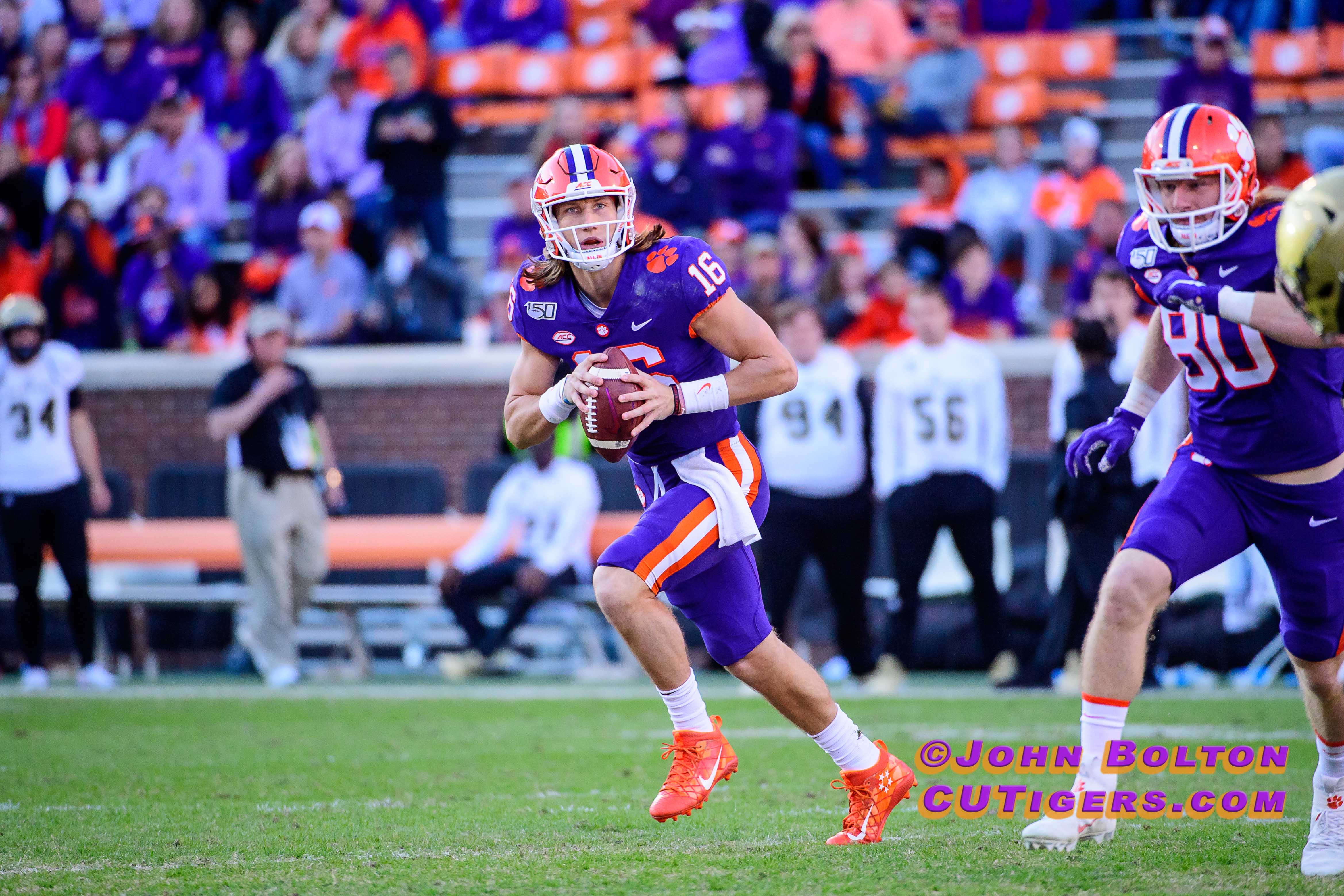 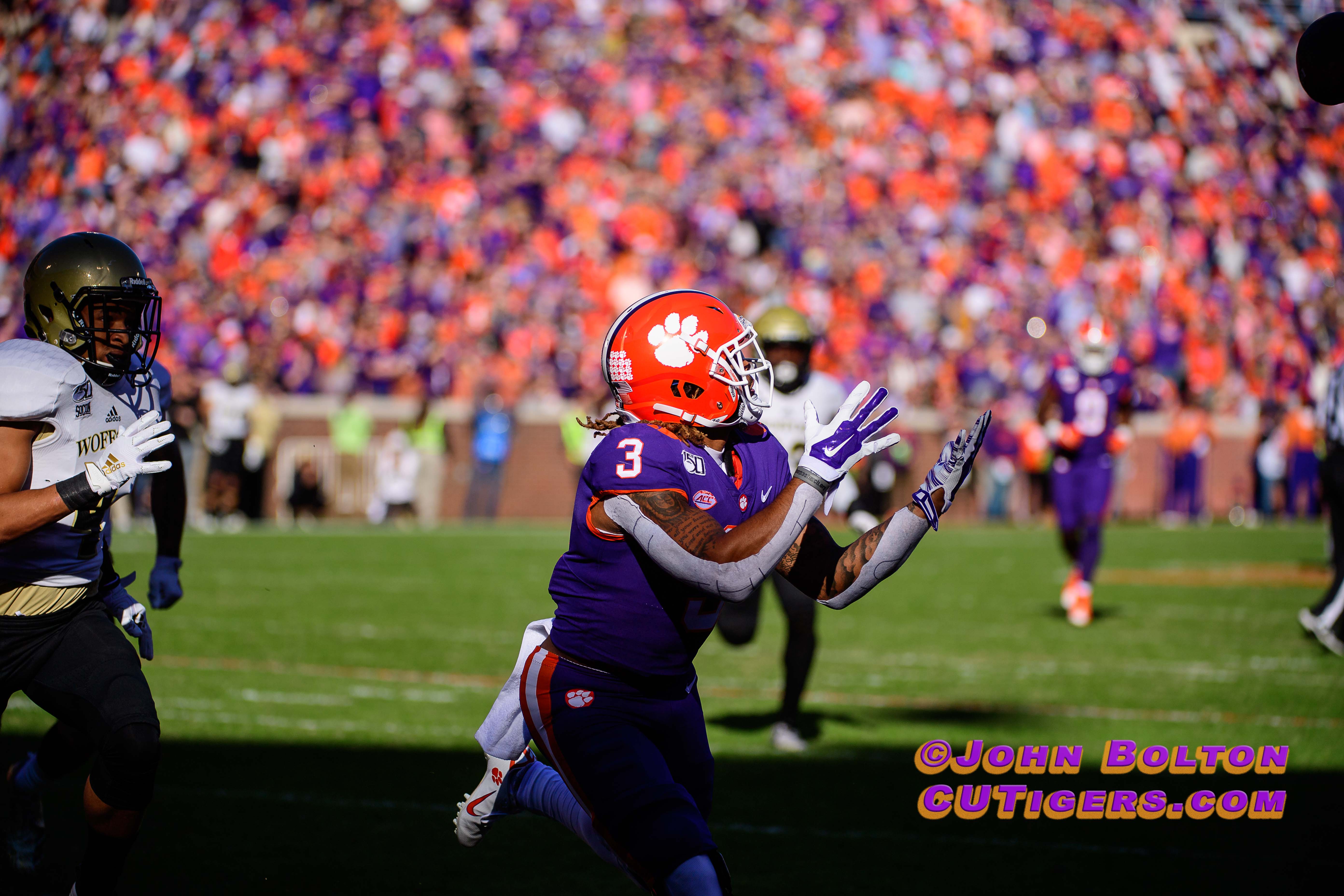 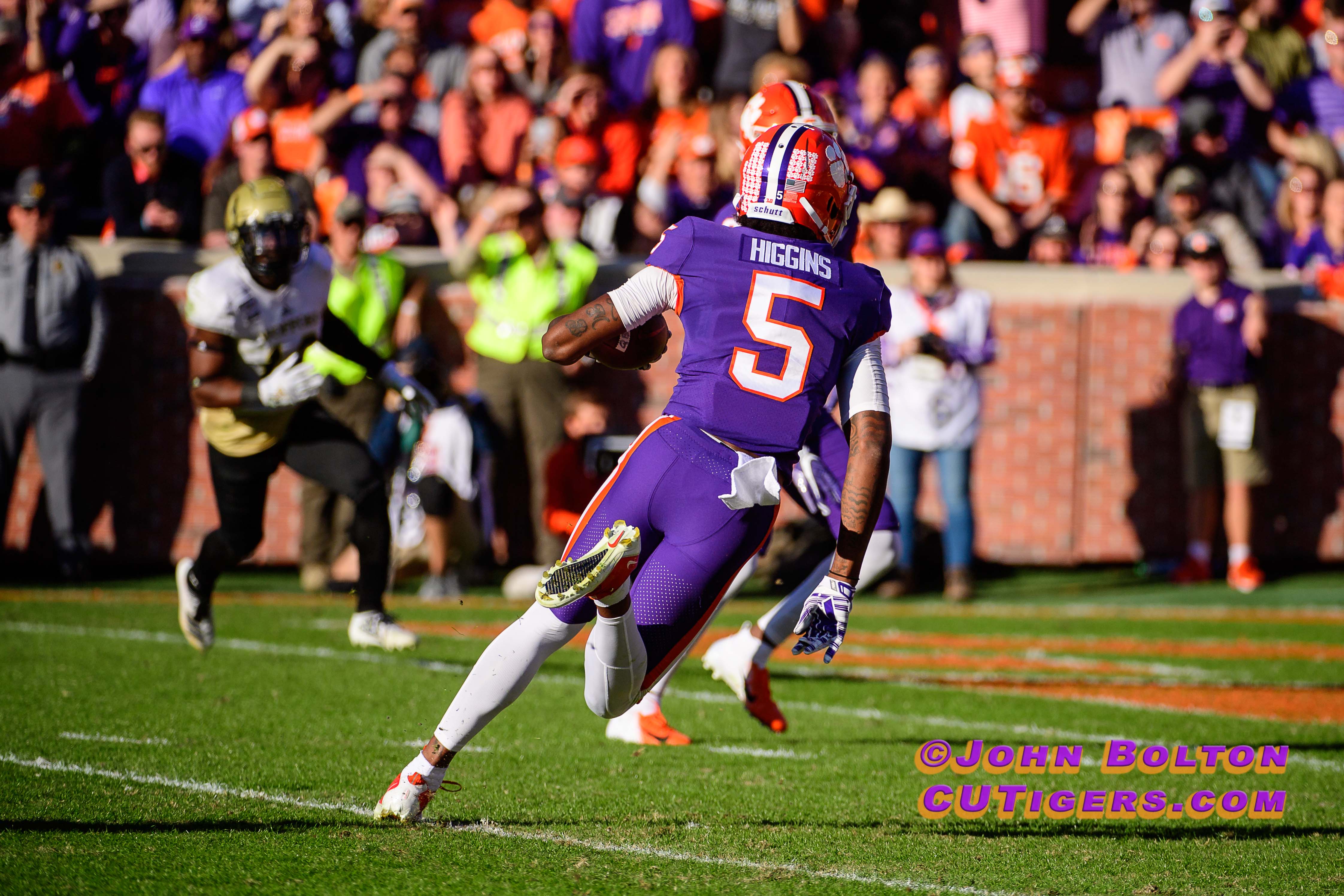 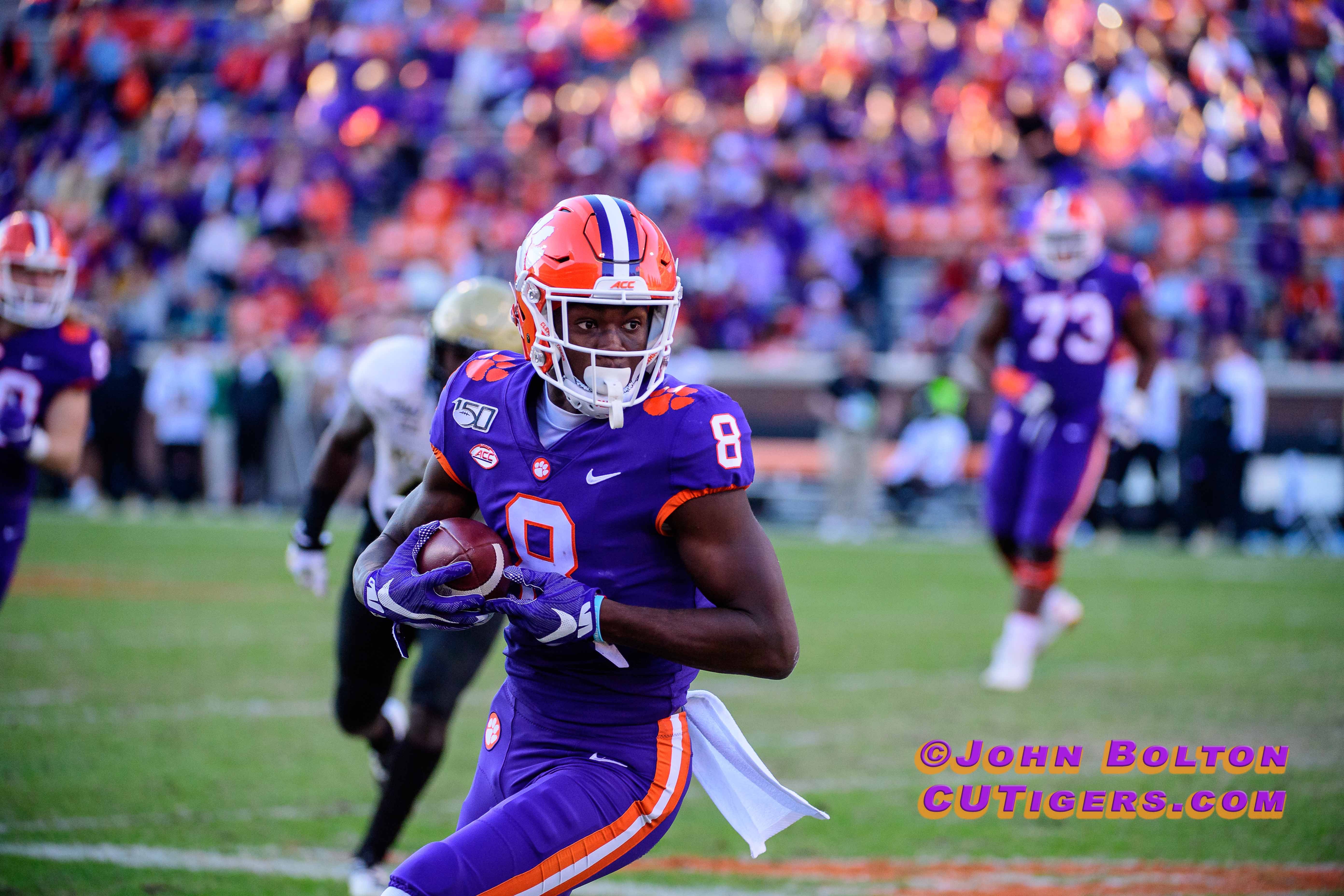 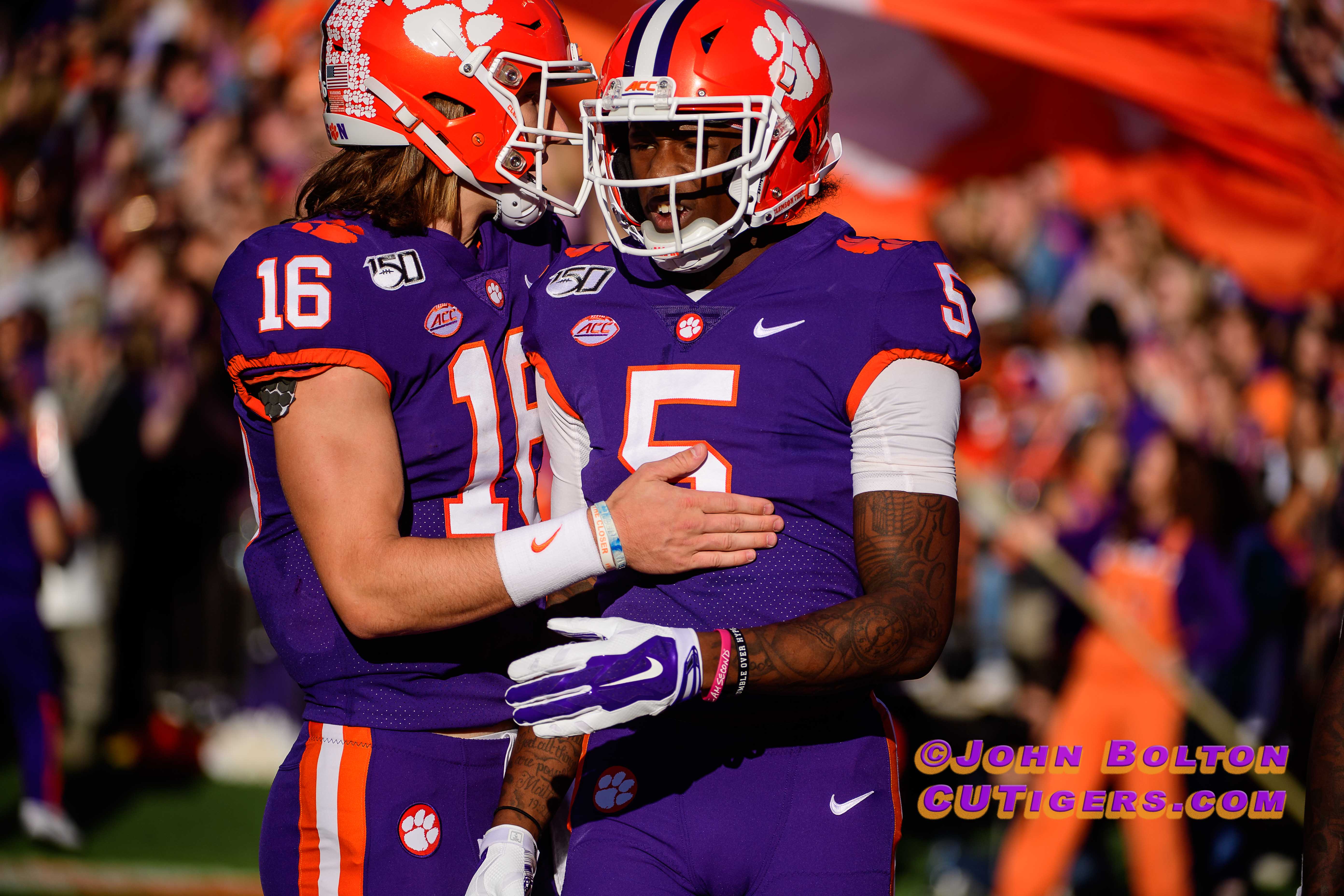 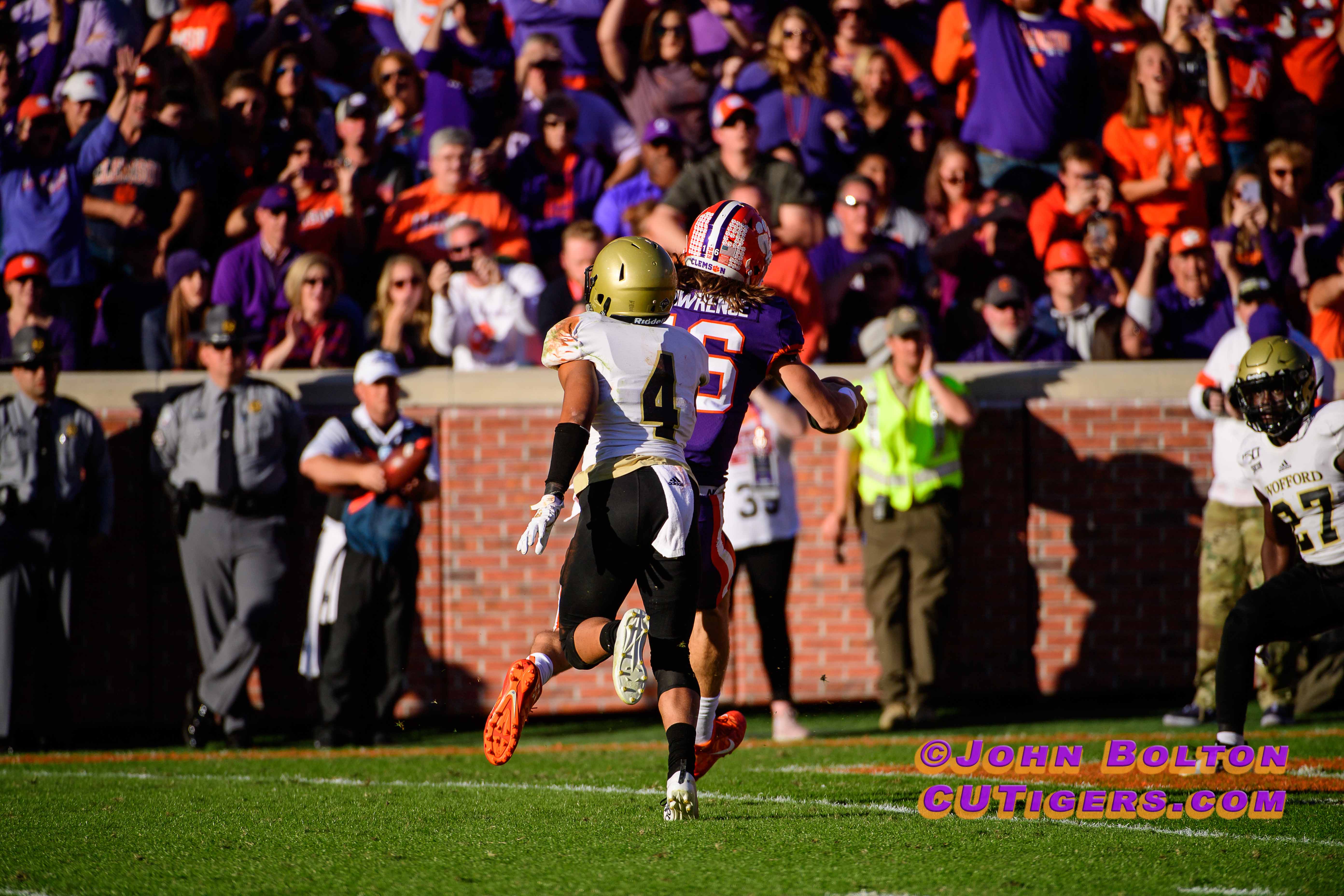 For the third straight game since suffering a concussion at practice, DE Xavier Thomas did not play, but he was suited up and ready. Dabo told us on Wednesday that they would hold him out if possible. Once again, however, the defense did not miss him. With the exception of one touchdown drive and a coverage bust, both in the second half, the Tigers’ defense dominated, allowing just 256 total yards. They have held their opponents to less than 300 yards in all 9 games this season. That is the first time any team has done that since Alabama in 2011! The only other team to accomplish the feat in this century was LSU in 2006. Isaiah Simmons recorded his first interception of the season, and Mike Jones forced a fumble that was recovered by true freshman Sheridan Jones. The Tigers failed to record a sack for the first time this season, but that’s not surprising given Wofford’s triple-option offense. They recorded an impressive 10 tackles-for-loss, though, and forced 9 punts along with the two turnovers. In his second game back from a hamstring injury, Jake Venables had his best career game with 3.5 tackles-for-loss—probably a result of his dad knowing the triple option as well as anyone. 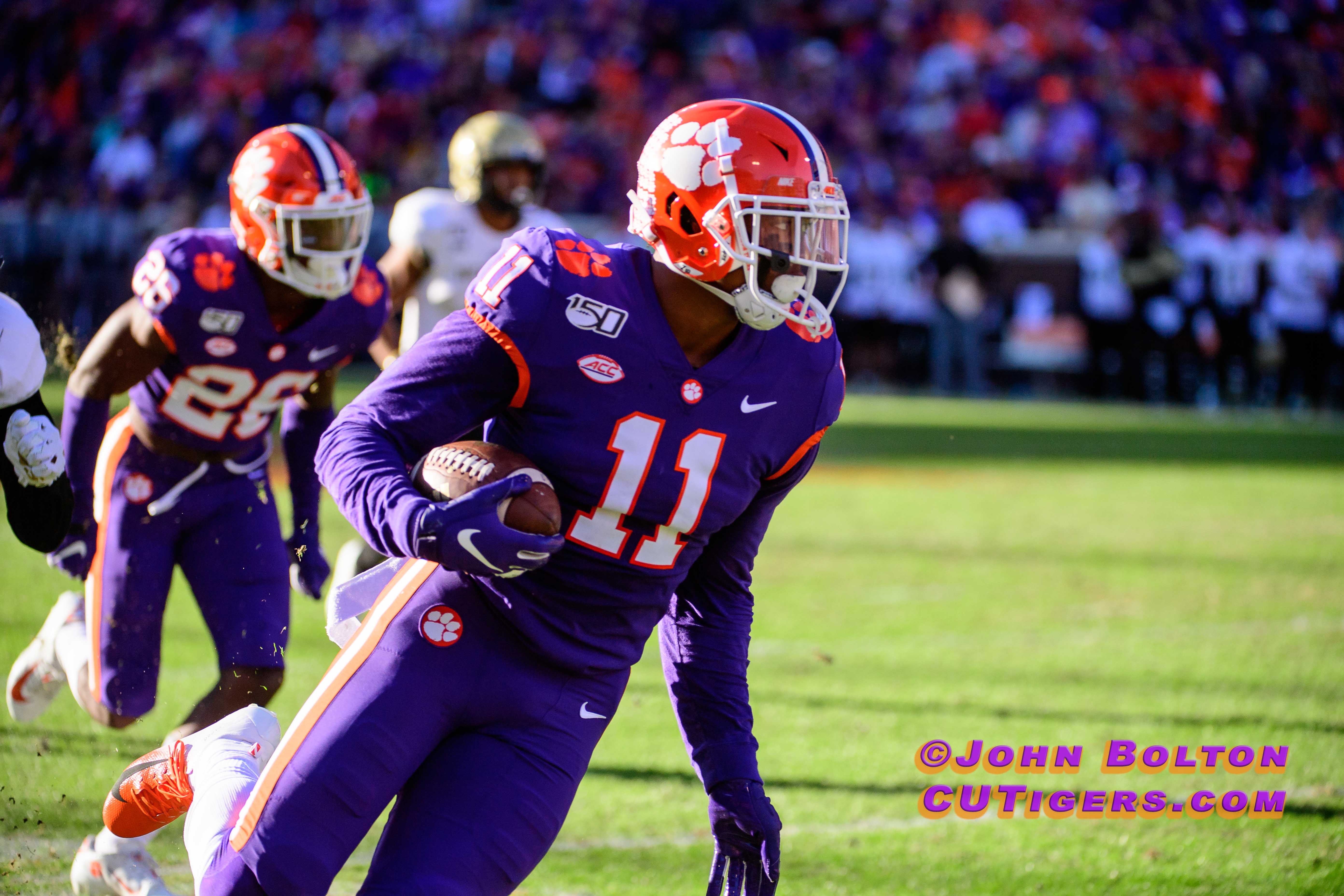 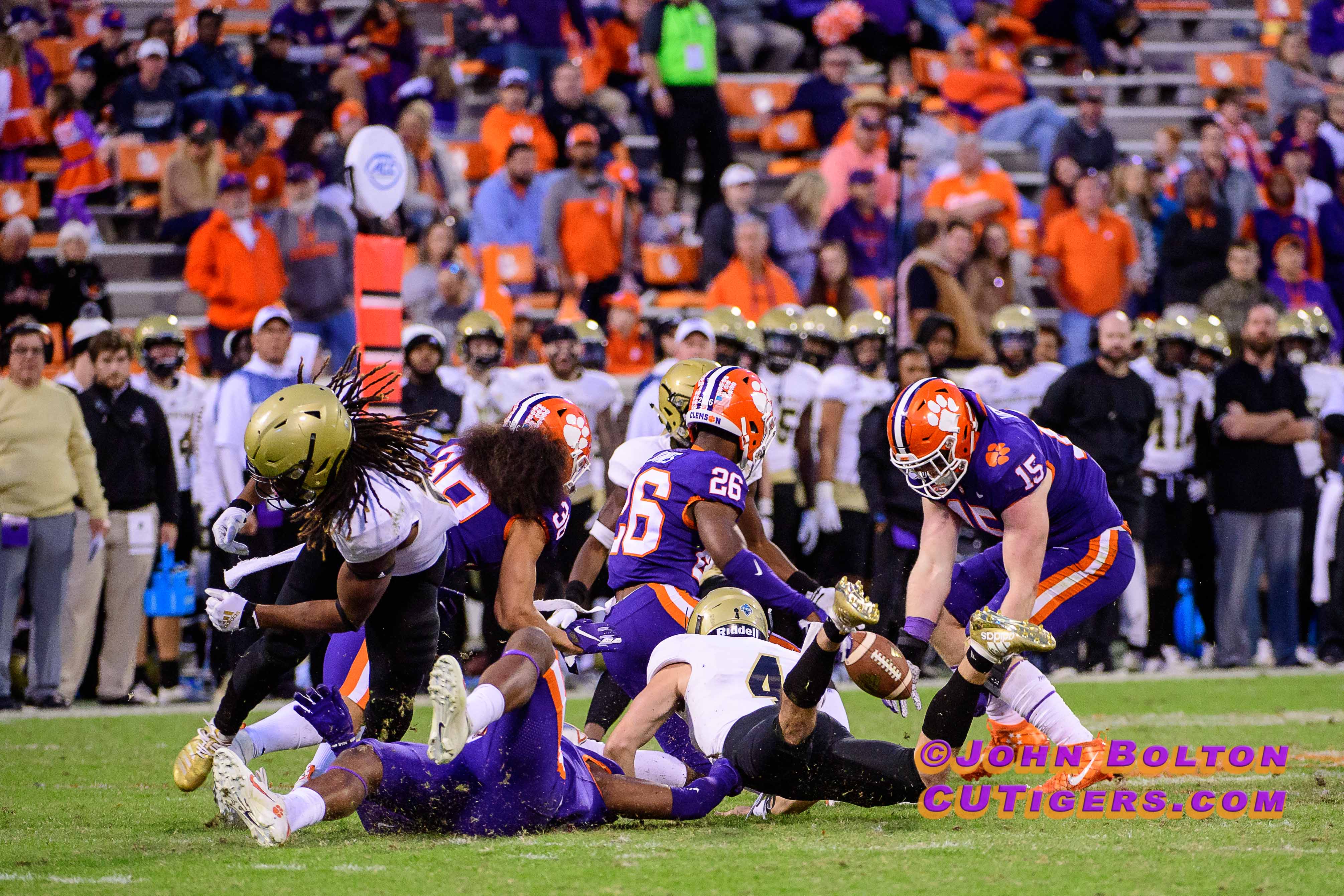 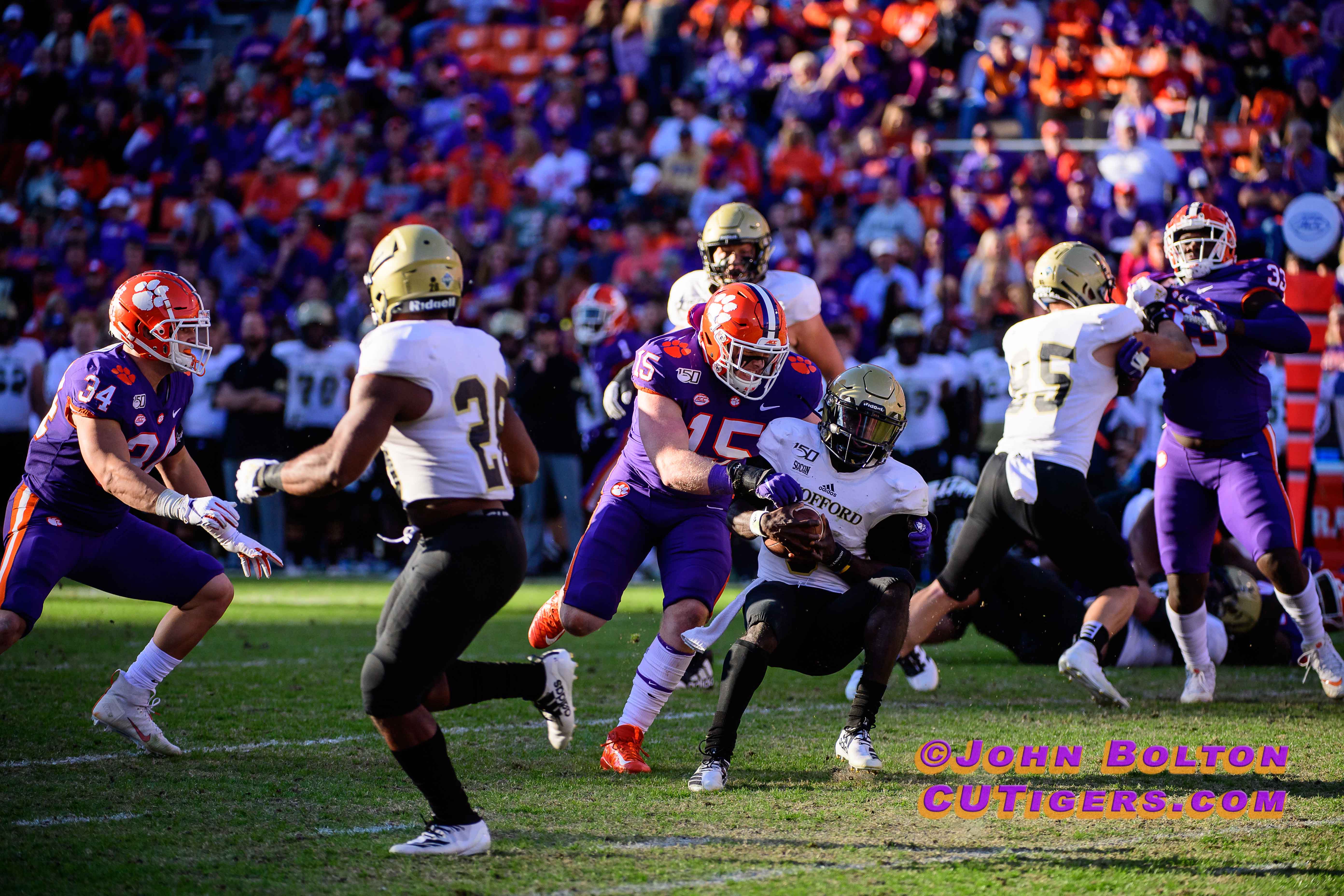 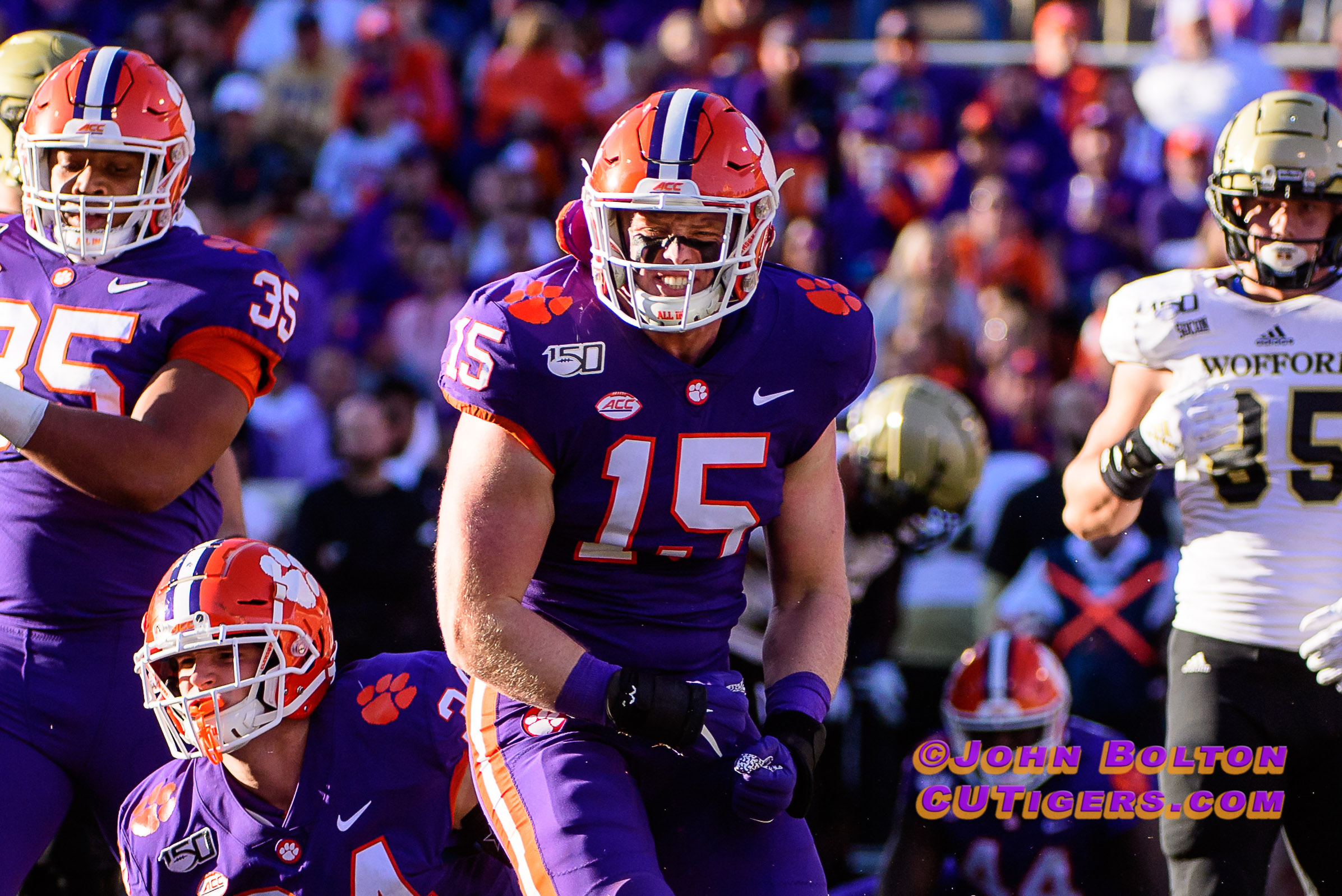 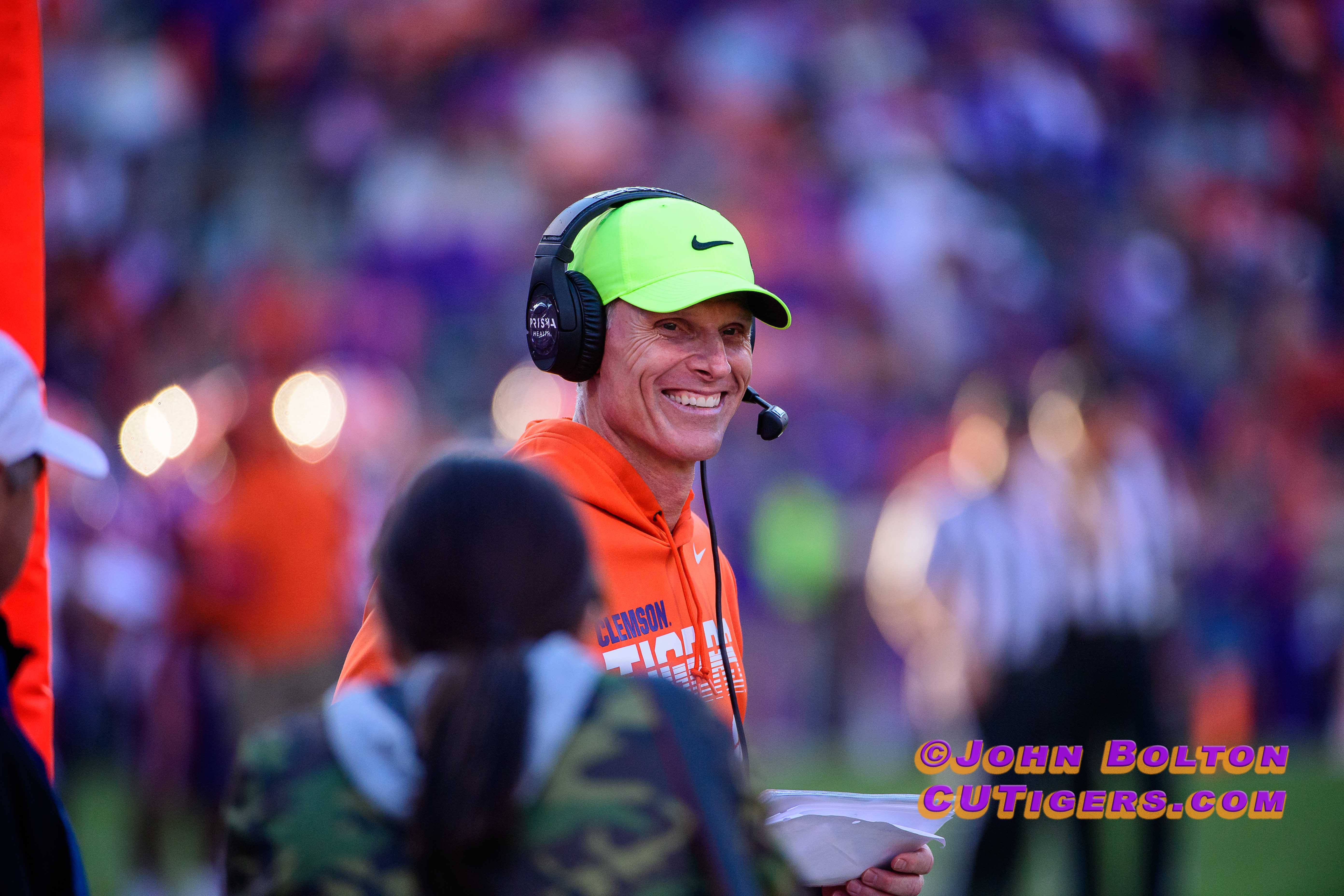 BT Potter missed a 35-yard field goal on his first attempt because he stubbed his foot in the ground before making contact with the ball. He redeemed himself on the next possession, though, putting one right down the middle from the same distance. Lyn-J Dixon rushed for 50 yards and a touchdown on just 7 carries, and true freshman Chez Mellusi added 57 yards on 8 carries. Darien Rencher posted a 24-yard run, the longest of his career, and scored his second career touchdown and second in the last 3 games.

The Tigers have scored 45 points or more in 4 consecutive games for the first time ever and have recorded 600 or more yards of total offense in consecutive games for the first time ever. They have outgained their last two opponents by 497 yards and 446 yards. The first real rankings will be released by the College Football Playoff Committee on Tuesday night, and it will be interesting to see if they have less amnesia than those at ESPN and the pollsters. From where I sit, the Tigers have won 24 straight games with 21 blowouts, including 8 blowouts in 9 games this season. Their offense is playing as well or better than it was at this time last year, and the defense is playing even better than it was last year. I don’t care what the computers say about strength of schedule. All I need to know is that this team is outperforming the best team ever that went 15-0 last year, blowing out Notre Dame and Alabama in the playoff. This Clemson team should be No.1, and anyone who thinks otherwise has blinders on.

I’ll have Dabo’s Sunday teleconference for you later this afternoon, around 5:00, so stay tuned!

“I’m certainly proud of our guys. Obviously, Wofford’s a team that didn’t matchup with us on paper. But I’ve been in a lot of those games over the years, and you’ve still got to play well. I’m   proud of our team. We had great energy and played well the whole game. We were incredibly efficient. The offense set the tone for us out of the gate. That’s four games in a row we’ve played really well.”

“Today was a day a lot of history was made. I’m super proud of our offense. That’s back-to-back games with no turnovers. We picked up 702 yards. That’s also back to-back games with over 600 yards of offense. This program has never scored 45 or more points four games in a row before today, too, so a lot of amazing things happened. It’s pretty remarkable what this group has done, especially when you talk about rushing the ball and spreading the ball around.”

On Travis Etienne and Trevor Lawrence:

“Trevor’s efficiency rating is higher now than it was at this time last year. We rushed for 419 yards. Etienne has set the tone for us for the last month. You think about all the great running backs who have come through here, and, today, he broke the school record for career rushing touchdowns. I’m really proud of Travis, and he’s got a lot more left. He’s been a joy to coach.”

On the Tigers’ defense:

“Defensively, we also made some history. That’s nine games in a row of holding opponents to less than 300 yards. And that’s happened only twice in 20 years, and that’s incredible to do in today’s world of college football. I’m really proud of how consistent our defense has been all year long.”