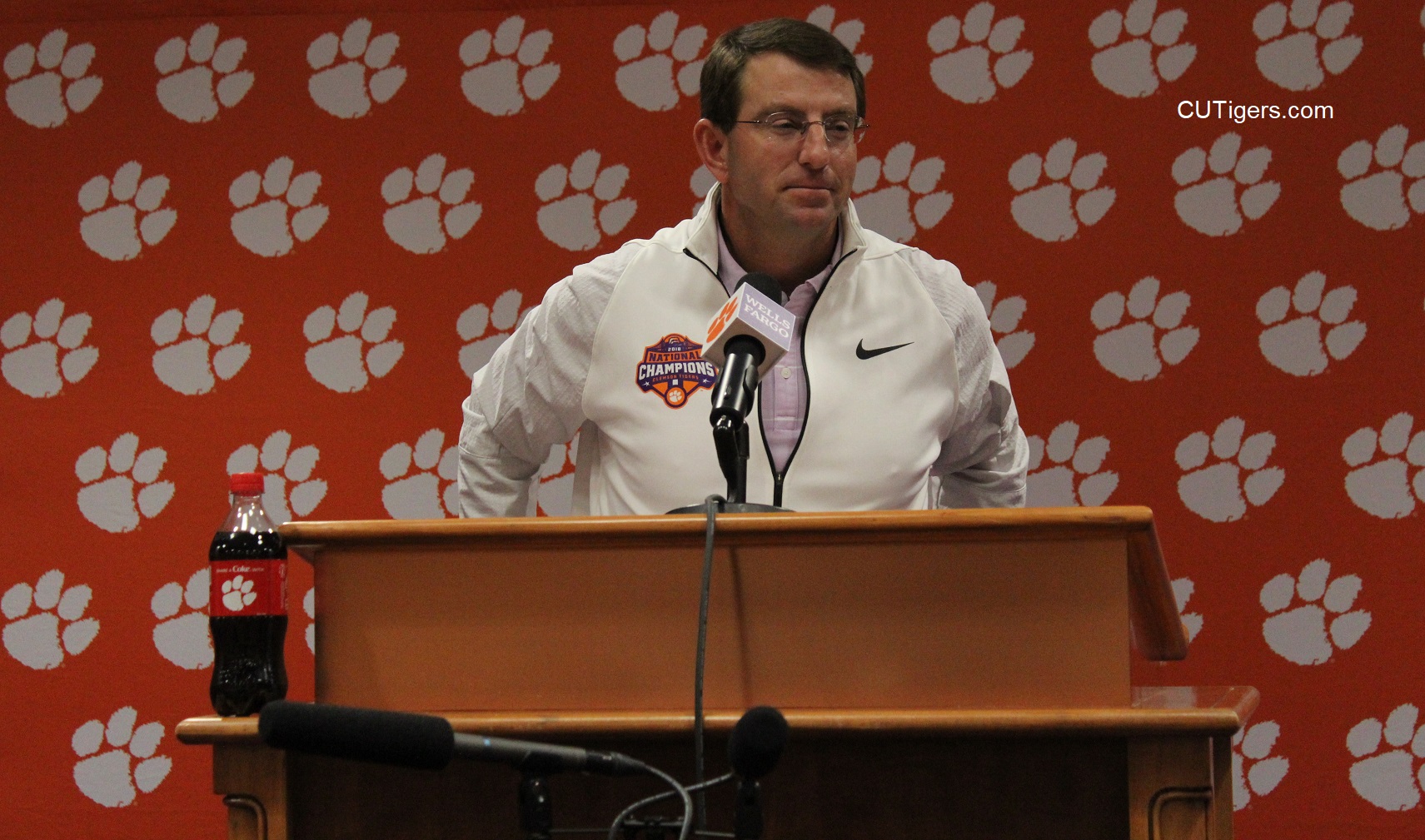 Dabo held his weekly press conference on Tuesday to preview Saturday's game at NC State. It's the Tigers' penultimate ACC regular season game, and if Wake loses on Saturday at Virginia Tech, the Tigers can clinch a spot in the ACC Championship with a win in Raleigh.
It's been a tough rebuilding year for State, but Dabo did his best to emphasize how dangerous the Pack can be and that it's been one of the Tigers' tougher opponents over the years. Indeed, the last several contests in Raleigh have been dog fights, even when the Tigers have been heavily favored. It took a punt return touchdown by Ray Ray McCloud--the only one of his career--and a late interception by K'Von Wallace to seal the win two years ago, and in 2015 it was a similar type of game. The Tigers lost badly at NC State at the end of the season in 2011 before going on to win Dabo's first ACC Title, and that was the last time the Tigers lost to the Pack. Of course, there was also the overtime thriller in Death Valley in 2016, when Wayne Gallman was knocked out of the game in the first quarter and the Tigers turned the ball over several times. However, this seems like a different year for the struggling Wolf Pack. For one thing, they have always had a solid quarterback in recent years--from Finley to Glennon to Brissette, all of whom played in the NFL--but they have yet to find a consistent starter this season. They have played three different quarterbacks throughout the season, and that has been a theme for the Tigers' opponents this season. Louisville, FSU and BC all had musical quarterbacks as well for one reason or another, and Wake Forest--the Tigers' next opponent--has also used a couple different QB's recently because of injury. I asked Dabo about the abnormality of the quarterback shuffling this season, and he said the good thing about it is that NC State won't change what they do offensively depending on who the signal caller is.
It was one of the more entertaining press conferences, and Dabo closed with an amusing story about his only encounter with Michael Jordan (AKA the basketball Deshaun Watson). Dabo was at a Birmingham hole-in-the-wall bar for his bachelor party, and MJ was there after playing a minor league game for the Barons! Dabo said he introduced himself, and his buddies took a picture of the two of them with a disposable camera (remember those?). Boy, I'll bet that bar would love to have that picture framed on their wall! Life is amazing sometimes.
Finally, I asked Dabo about K'Von Wallace, who has remarkably recorded an interception against NC State in each of the last three years. Dabo talked about how valuable K'Von's versatility is and how much of a leader he has become on this team and said it would be really cool if he can become the first player ever to record an interception in all four games against an opponent.
We also had another great interview with Darien Rencher, the spiritual leader of the team, who recorded his second career touchdown and longest career run on his birthday on Saturday. He has a special relationship with Trevor Lawrence, who is also a very devout Christian, and he spoke about that as well. We closed with Chad Smith, who had the honor of running down The Hill with the flag on Military Appreciation Day. He has several family members in the military, so that was a very special honor for him.
The full interviews are below!
MONDAY COACH AND PLAYER INTERVIEWS HERE