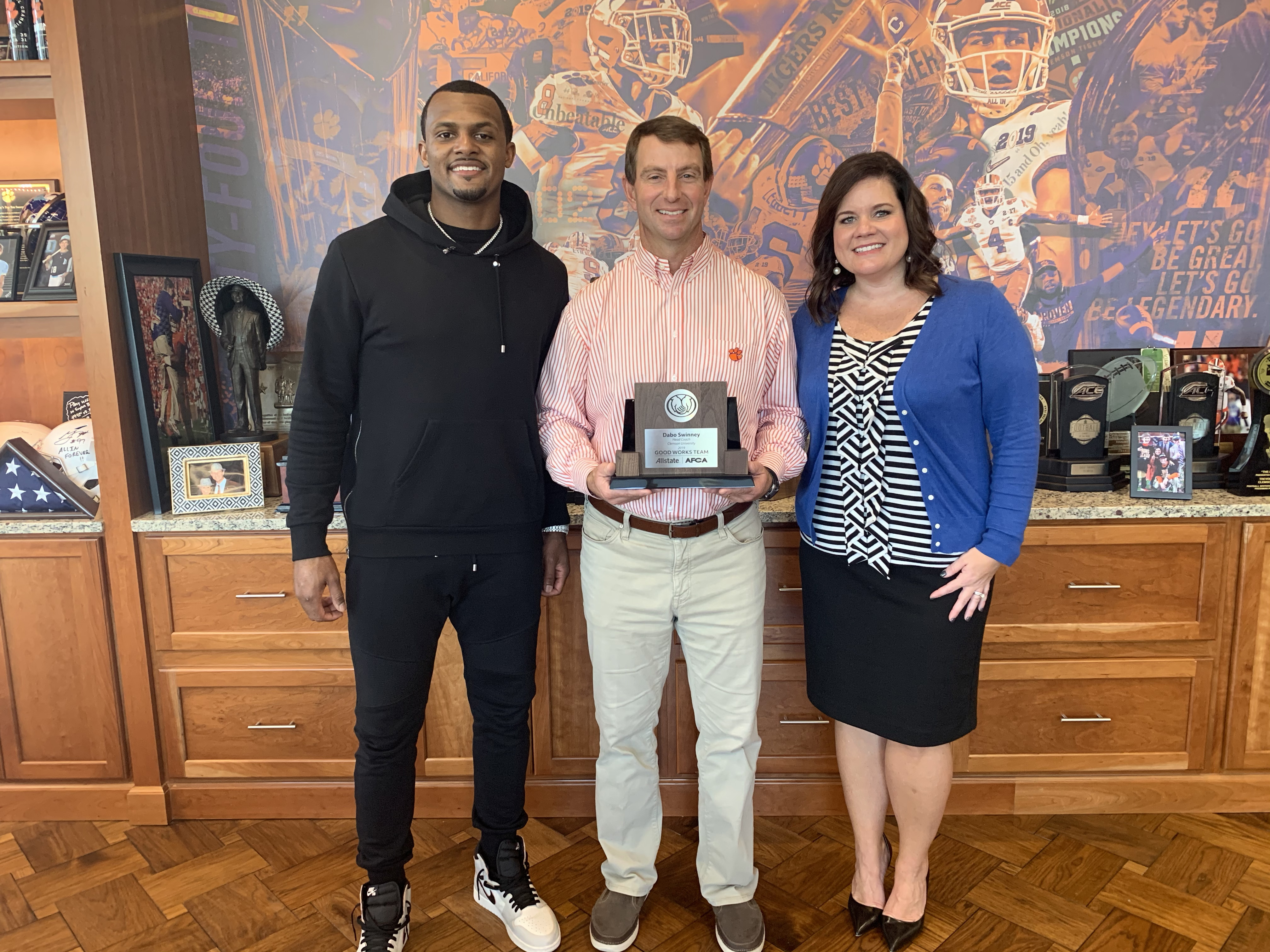 CLEMSON, SC - Deshaun Watson has an open date this week with the Houston Texans, and he used his time off to fly into Clemson and surprise Dabo with an award from the Allstate AFCA Good Works Team on Wednesday as Honorary Coach of the Year. Clemson center Sean Pollard, of course, was one of the 22 players selected nationally for the Good Works Team last year for his "All Off for Cancer" efforts. Allstate was represented by Greenville Agency Owner Angela Devore, a Clemson alumna, who presented Sean Pollard with his award last year.
Deshaun is on the Good Works Alumni Team and is the epitome of what both Dabo and the Allstate Good Works Team represent. "It's special to be able to find some time to come back to my old university, my old stomping grounds, my second home," Deshaun said. "[Dabo] inspired me to do the same thing while I was here, to be able to use this platform for the right reason, help my community and continue to help others around me. If you can be a servant-leader and make the community better, then you'll make the whole world better." You may recall that Deshaun grew up in a Habitat for Humanity house, and that instilled a philanthropic fervor in him at an early age. In his rookie season with the Texans, Watson donated his first NFL game check, worth roughly $29,000, to Houston cafeteria workers who were hit hard by Hurricane Harvey.
Deshaun's calling to serve others was reinforced by his Clemson coach, Dabo Swinney, whose All In Foundation has raised millions for charity. "The fact that Deshaun Watson flew all the way here to make an effort to come and surprise me and present the trophy to me in the team meeting was even more special," Dabo said. "Because he's the epitome of the Good Works Team. It was a great honor and something I'm super proud of."
Allstate hosts the Sugar Bowl in New Orleans, and Dabo hopes to have his Tigers in New Orleans a couple weeks later for the CFP National Championship. You can watch Deshaun's presentation to Dabo below, as well as interviews with Deshaun and Dabo!
GAME WEEK FOOTBALL COVERAGE HERE