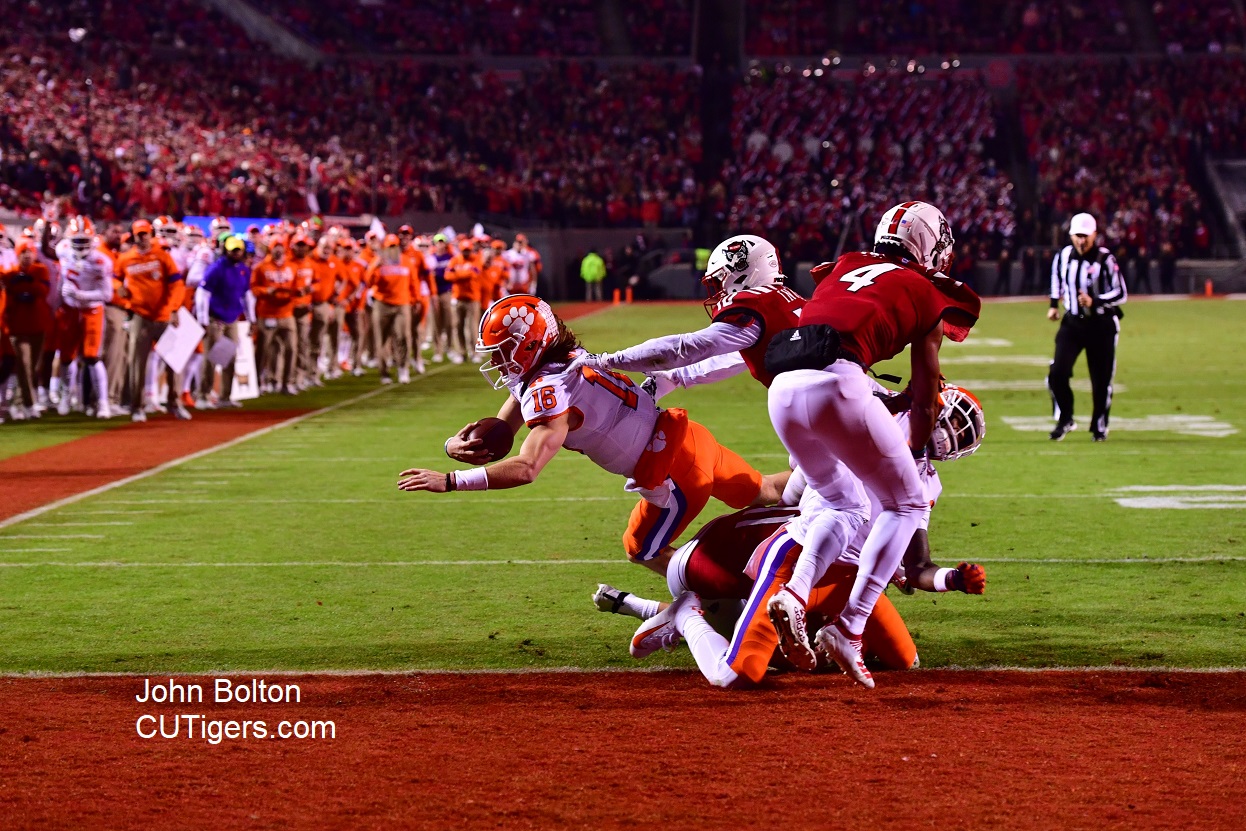 RALEIGH, NC - The Defending Champs continued to roll in Raleigh, routing NC State 55-10 to clinch their fifth straight ACC Atlantic Division Title on Saturday night. The Tigers warmed up in their usual road white pants, but after learning that Wake Forest had lost at Virginia Tech and they could clinch the division with a win, Dabo had the Tigers change into their Orange Britches before kickoff. 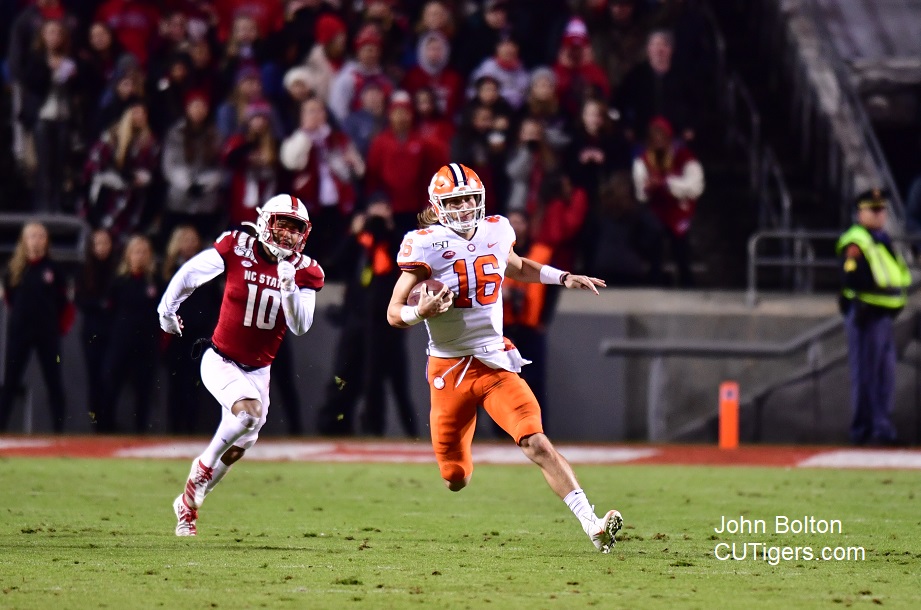 The Tigers didn’t waste any time, scoring touchdowns on their first 4 possessions and 7 of their first 8. The Tigers had the game wrapped up at halftime, up 42-0 at the break. Trevor Lawrence continued his excellence and efficiency, going 20-27 (despite a couple drops) for 276 yards with 3 touchdown passes and no interceptions. He also rushed for 59 yards and another touchdown on 8 carries and had a 4th TD pass dropped by Higgins in the end zone on a perfectly thrown deep ball. Trevor is the first Clemson player to throw 3 TD passes in 5 consecutive games. Not even Deshaun Watson accomplished the feat! He has really perfected the running aspect of his game and taking what the defense gives him to extend drives. He now has 7 rush TD’s this season after just one last year. 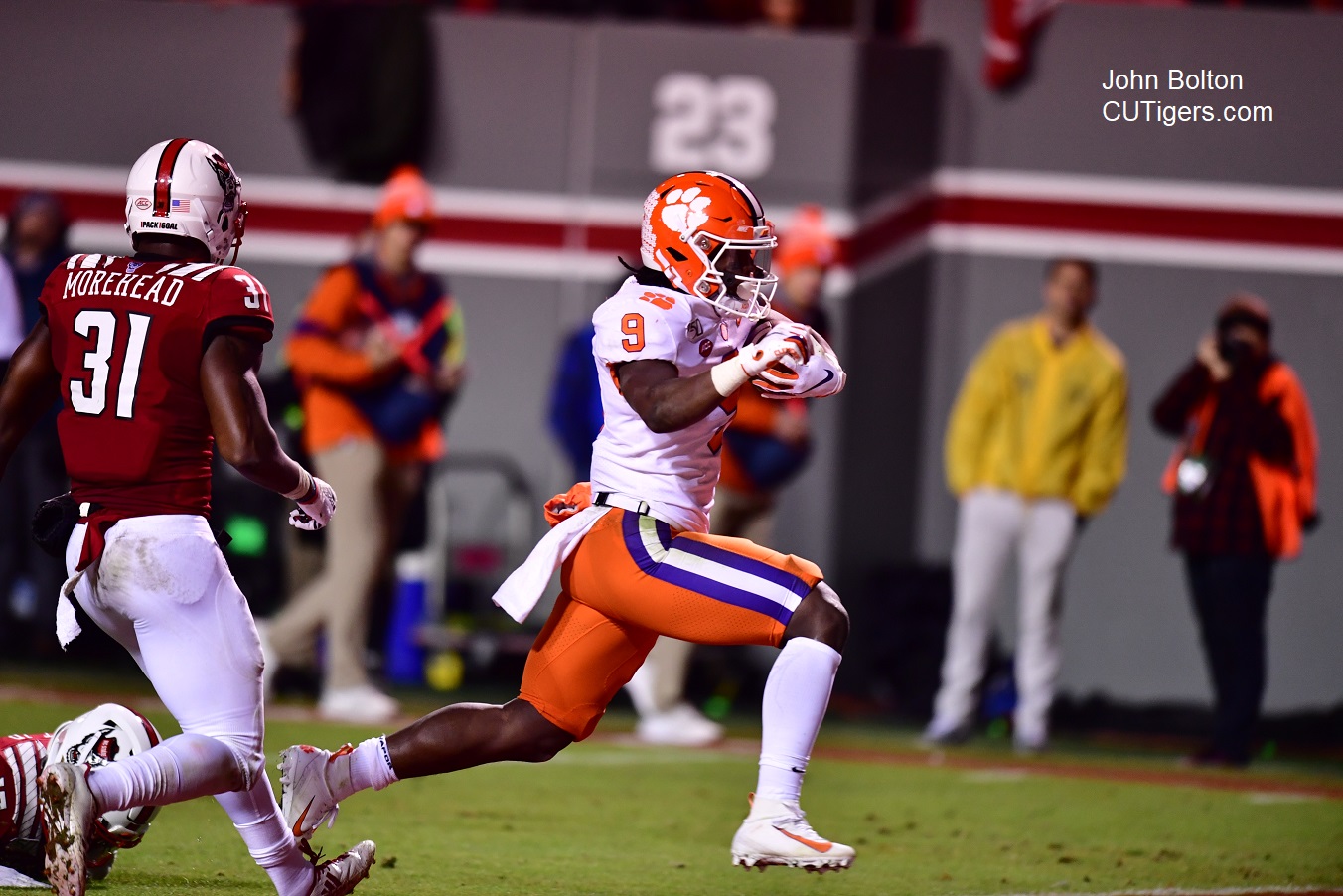 Travis Etienne ran through the beleaguered Wolf Pack defense like a hot knife through butter in the first half. He scored 3 times, rushing for 112 yards on 8 yards per carry. He also had 3 catches for 31 yards. It was Etienne’s 7th career hat trick, and he broke C.J. Spiller’s Clemson career all-purpose TD record. He is now just 2 rush TD’s short of James Conner’s ACC career rush TD record (52) and 2 TD’s short of Conner’s all-purpose TD record (56). So if Travis scores 3 more rush TD’s, he will have both records alone.

Higgins tied Ross for the team lead with his 5th TD of the year, but Ross moved back ahead of him with his 6th. The Tigers had a scare when Higgins got hurt blocking on Trevor’s TD run in the opening possession, but thankfully Higgins was fine. He did have two uncharacteristic drops after that, though, that cost him at least one touchdown and maybe two.

The Tigers were able to get OG John Simpson into the mix with their jumbo package on 2nd and goal from the one-yard-line. Ordinarily, they would have used Xavier Thomas as the tail back, but since he was coming off a concussion, they used big John Simpson. It was the first touchdown he has scored in his entire life, and it put the Tigers up 35-0 in the 2nd quarter. Tim Bourret told me it was the first touchdown scored by a Clemson offensive lineman since Brandon Thomas in 2011. The Tigers tried to get one for Mitch Hyatt against Louisville last season, but he was unable to get in the end zone.

The defense was outstanding as it has been all season long, holding its 10th straight opponent to less than 300 total yards. The Tigers recovered four fumbles to stay positive in the turnover margin. Xavier Thomas was back after missing 3 games with the concussion, and he recovered one of the fumbles. State’s only touchdown came on a long run in the 3rd quarter.

True freshman Michel Dukes was able to provide an exclamation point with a late touchdown, and Dabo let James Skalski attempt the PAT, but he missed it. Skalski has kicked off in a game before, and Dabo said that he usually makes his attempts in practice. At any rate, I was glad he missed because it made my 55-10 score prediction perfect!

The Tigers nation-leading win streak is now 25 games. They are 10-0 for the sixth time in school history and have won at least 10 games in 9 straight seasons. That ties Texas for the third-longest streak in history! They are an astonishing 68-4 in their last 72 games, and with Alabama’s loss, the Tigers have fewer losses since 2015 than any team in the nation. Alabama’s home loss to LSU also gave Clemson the longest active home win streak at 21 games. The Tigers have won 42 of their last 43 games in Death Valley, losing only on the last-second field goal by Pitt in 2016. They will have a chance to set a new school record by beating Wake on Senior Day in their final home game of the season!

Dabo’s PC, player interviews and highlights are below, and don’t forget to check back for our Sunday evening teleconference with Dabo!