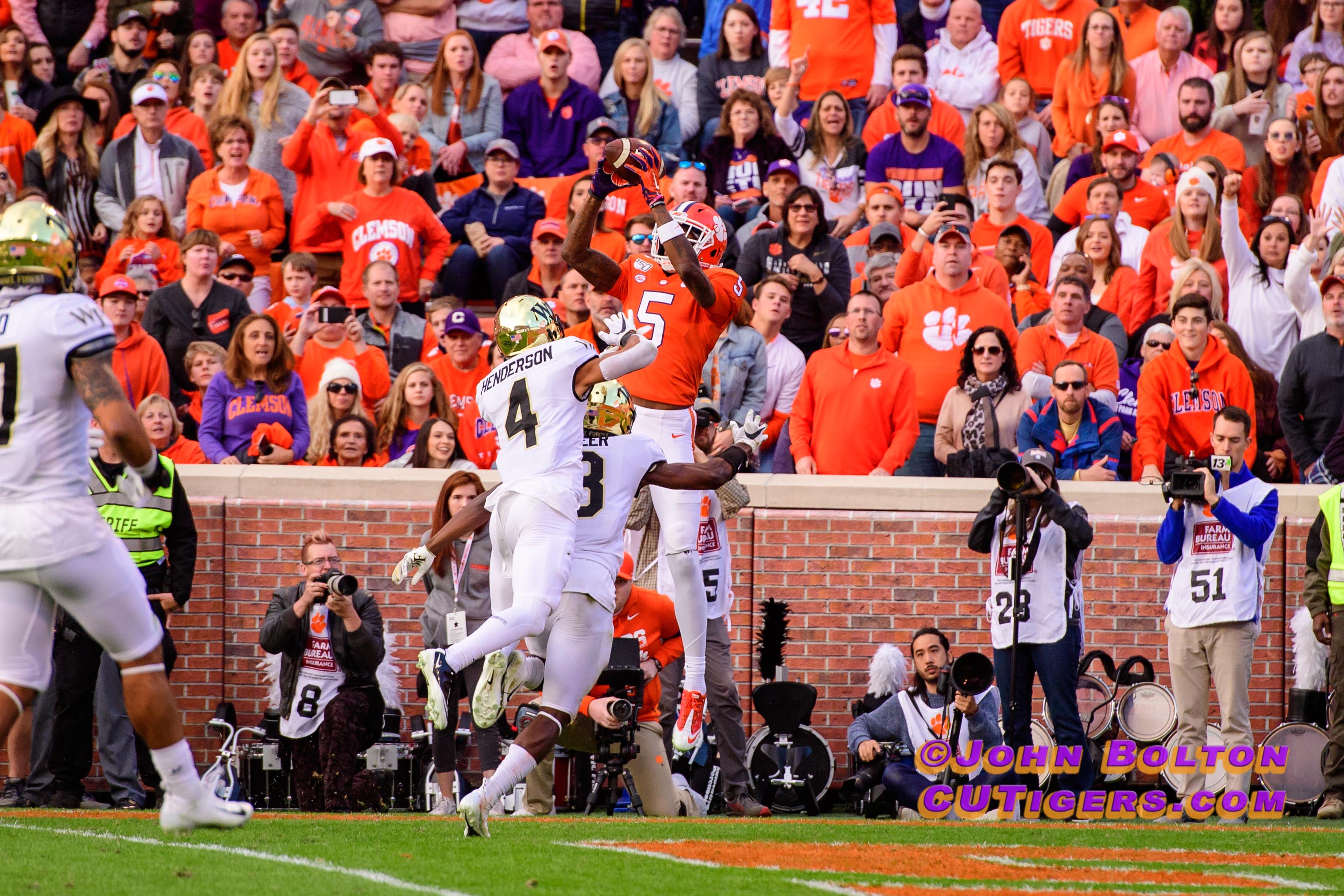 CLEMSON, SC – On an emotional Senior Day in Death Valley, the Defending Champs continued their dominance of the ACC on Saturday with a 52-3 rout of Wake Forest, which was ranked No.19 last week. The Tigers set a new school record with their 22nd straight home win, the nation’s longest active streak, and extended their nation-long win streak to 26 games.

It was another fast start for the Tigers on both sides of the ball. After forcing a Wake three-and-out to start the game, Amari Rodgers returned the punt 53 yards to set up the offense with great field position. After a couple runs by Trevor and Travis, Lawrence found Higgins on the third play for a 14-yard touchdown. On the very next play from scrimmage, senior Tanner Muse hauled in his 4th interception of the season to give the offense great field position again. This drive was all Travis Etienne. He rushed for 19, 5, 3 and 14 yards on consecutive plays to put the Tigers up 14-0 just 5 minutes into the game. It would be Etienne’s only score of the game, and he is just one rush TD short of James Conner’s ACC career record for rush TD’s and all-purpose TD’s. Etienne went over 100 yards for the 6th straight game, finishing with 121 yards on 7.6 yards per carry. Interestingly, “Thunder” James Davis was inducted into the Clemson Hall of Fame at halftime. Etienne broke his Clemson career rush TD record against Wofford a couple weeks ago. Lyn-J Dixon scored his 5th rushing TD of the season as well and had a career-long 55-yard reception.

The star of the game for the Tigers was Tee Higgins, who tied a Clemson record with his hat trick in the first half. Overton had a hat trick a few weeks ago against Boston College, and Higgins repeated the feat. In fact, he would have had 4 touchdowns, but Trevor overthrew him on a deep ball down the seam. Higgins finished with 4 catches for 64 yards including the 3 TD’s. He now leads the team with 8 touchdowns this season. Justyn Ross and Amari Rodgers both left the game with minor injuries, but Dabo told us after the game that both will be fine. In their absence, the Tigers’ newest star receivers, freshmen Frank Ladson and Joseph Ngata, both scored touchdowns in the same game for the first time. It was the 3rd of the season for each.

Trevor Lawrence continued his stellar play and remarkable efficiency, going 21-27 for 272 yards and 4 touchdowns with no interceptions. He is the first Clemson QB ever with at least 3 TD passes in 6 straight games—no other Clemson QB has done it more than 4 straight games—and hasn’t thrown an interception since the first half of the Louisville game. As I tried to tell the critics and skeptics on ESPN for over a month, Trevor Lawrence will be back to playoff form by the end of the season, and he is certainly there now. One of the few negatives of the game was the pressure Wake was able to get on Trevor. The offensive line has done an outstanding job protecting him all season, but he was sacked twice in the first half and barely escaped a couple more.

Once again, Brent Venables and the Tigers’ defense demonstrated why they are arguably the best unit in the nation. Against the No.2 offense in the ACC, they forced 7 three-and-outs and 2 turnovers, holding Wake to just 105 yards of total offense. It was probably their best performance all season, and they should have had their only shutout of the season, but Wake was able to get a cheap field goal after a botched punt by Will Spiers in the 1st quarter. That was also just the second score the Tigers have allowed in the 1st quarter all season. To be fair, Wake was without its top 2 receivers, Sage Surratt and Scotty Washington, and having them would have made an enormous difference. Wake probably would have scored 10-17 points if they had those two, but it was still an incredible performance by the Tigers. They have held all 11 opponents under 300 total yards this season—something that hasn’t been done by any team in at least 13 years! In addition to Tanner Muse’s interception, A.J. Terrell posted his second INT of the season.

The Tigers will have an unusually late bye week to recuperate from their bangs and bruises—particularly Justyn Ross and Amari Rodgers—before the big Palmetto Bowl against the Gamecocks, who will also have a bye after losing 30-6 at Texas A&M on Saturday night. The Tigers have completed their second straight undefeated ACC regular season slate and are now 69-4 in the last 73 games. The seniors, who just played their final game in Death Valley and set a new home win streak record, have an opportunity to eclipse last year’s Clemson and Alabama seniors as the winningest class in college football history.

Due to the bye week, we’ll have our Sunday evening teleconference with Dabo on Monday evening. Stay tuned!

“Today was a great day. Senior Day is always a bittersweet day. It’s always emotional during the course of the week, and we try to manage it the best we can and think about all of the positive things that have happened over the course of the past four or five years. Wake Forest is a good football team. I’m proud of how our guys competed. They show up and prepare well every week. Our staff’s done a great job, and our players have a good focus about them. It’s been a real joy to coach this group and see how they’ve come together and improved.”

“Today was a historic day. For our seniors, they’re the fastest to 52 wins in college football history. They’ve given us great leadership, and a lot of those guys played outstanding football today.”

On the keys to the win:

“I’m super proud of our guys. It’s been an amazing journey with this group. The defense set the tone today. Wake Forest’s offense was averaging around 500 yards of offense entering the game and only had 41 yards passing today. Of course, it was a big loss for them to not have their top two receivers, but they still have a great quarterback and offensive life and a unique offensive scheme. Our guys were locked in all week. I can’t say enough about our preparation. The turnovers were huge for us. We’re playing well on offense. We had a lot of great contributions on special teams, as well. It was a complete game.”

On the Tigers’ overall performance:

“We’re a talented football team, and we can overwhelm our opponents when we get short fields on offense and disrupt the line of scrimmage on defense. I’m proud of our guys. Trevor [Lawrence] was amazing. He threw for a career-high four touchdowns. Tee [Higgins] tied a record with three receiving touchdowns. The ball was spread around. A lot of guys made big plays for us, and we also won the turnover margin. Travis [Etienne] is the first Clemson rusher to have six 100-plus-yard games in a row. That’s a pretty special accomplishment. Lyn-J [Dixon] played well, too. The game ball went to the offensive line. It was just a tremendous performance by everyone. We subbed early in the third quarter and continued to play well. I’m excited about that for our backups to go in and play at a high level like they did.”

On the impact of the fans at Memorial Stadium:

“I really appreciate our crowd. It’s always a sad day to know it’s going to be next year before we play another game here at Memorial Stadium. I was trying to soak it all in before the game today. I have such a great appreciation for all of the fans who give us a great environment and the best gameday experience you could ask for.”

On closing the first half strong:

“I think making the most of our possession is really important and we didn't do that towards the end of the first quarter and the beginning of the second quarter. We really wanted to finish the first half on a good note because I thought we came out and played really well, played fast and had some big plays, but there’s some things we have to clean up. We did a really good job of making corrections and then we finished the first half really well and then came out the second half and played well too.”

“On any given night any of those guys can make plays. Tee’s a great player and it’s something you work on at practice and we had a really good week of prep. We knew certain things were gonna be there and all of our receivers can play different positions so we don't know who it’s gonna be all the time but Tee was the guy who got it today and he did a really good job.”

On first half adjustments:

“There were a couple plays where a guy kind of missed his assignment or they had a weird front one time where we missed a guy on the edge. So something like that we just go back up and draw it up and make an adjustment. We did a good job of that and there were at least three plays where I was holding the ball for 4-5 seconds so they did a really good job besides a couple of those plays. One of them was on me in the red zone, I took a sack. I feel like we did a good job coming back from it.”